On Monday night, approximately 1,000 guests headed to the plaza at the Museum of Contemporary Art, where Children's Memorial Hospital hosted a topping-off ceremony for its Ann & Robert H. Lurie Children's Hospital of Chicago. Some of those present, including government officials and donors, received invites to the happening. But "the hospital was very conscious about including the community in this," said Emily Olson, a senior account executive at Event Architects, which produced the public event.

As suggested by the attire of bundled-up attendees—who sported everything from construction helmets to policeman's caps and, in the case of a young guest, a winter hat festooned with rhinestone hearts—the ceremony drew a diverse cross-section of the general public.

The Event Architects crew worked with Jennie Steffus, the hospital's vice president of annual programs and events, to develop a winter street fair theme for the hour-long ceremony. At one end of the plaza, tented food stations offered chocolate-dipped marshmallows, roasted chestnuts, and butternut squash soup; staffers from Wolfgang Puck Catering wore Santa hats as they helped dole out the treats. Professional ice skaters whirled around an elevated rink at the center of the plaza, and across from them, the One Accord children's choir belted out "Jingle Bells."

Olson said that the temporary village took two days to set up. On Saturday the event crew unloaded their base; on Sunday they erected a stage and a 20-foot LED screen on one end of the plaza. During the topping-off ceremony, the screen provided close-up footage of speeches from the likes of Mayor Richard Daley, Maggie Daley, and Governor Pat Quinn. "We raised the screen up so everyone could see what was going on," Olson said. "It's a big plaza, and we wanted to make sure that everyone felt included."

Sunday also involved a test run of a light show that illuminated the hospital's framework as its final beam was hoisted into place. "We had all of our projectors set up, and we wanted everyone to test out their equipment in the dark to be sure that the light show would be really spectacular," Olson said. Doing the run through in the largely residential Streeterville area presented a challenge: "We wanted to be as unobtrusive to the neighbors as possible; we didn't want lights shining in their windows," Olson said. "Luckily, it gets dark these days at 4 or 4:30 p.m., so we were able to do our work early."

During the actual light show, local gospel singer Kim McFarland performed the theme song for the new building's fund-raising campaign. (The song was introduced during the campaign kickoff event last September.) "We choreographed the lights to the song, and the effect was that the building looked alive, like it was breathing or talking," said Olson.

Monday night's ceremony took place some 18 months after the hospital broke ground for the new facility; the building is scheduled to open in 2012. 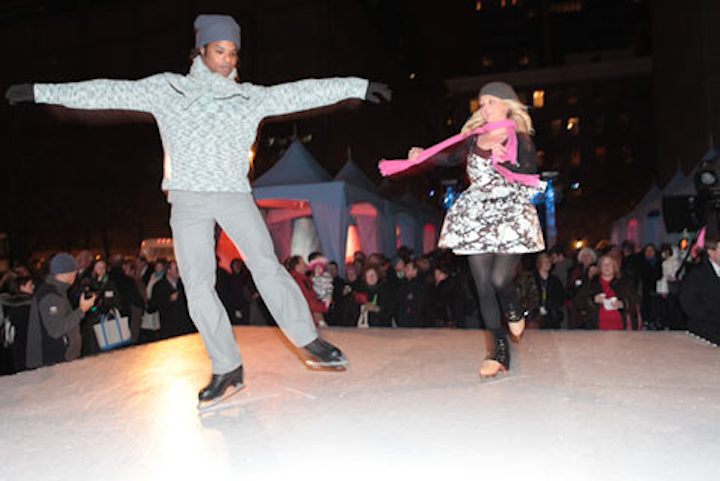 The plaza at the Museum of Contemporary Art
Photo: Rick Aguilar Studios 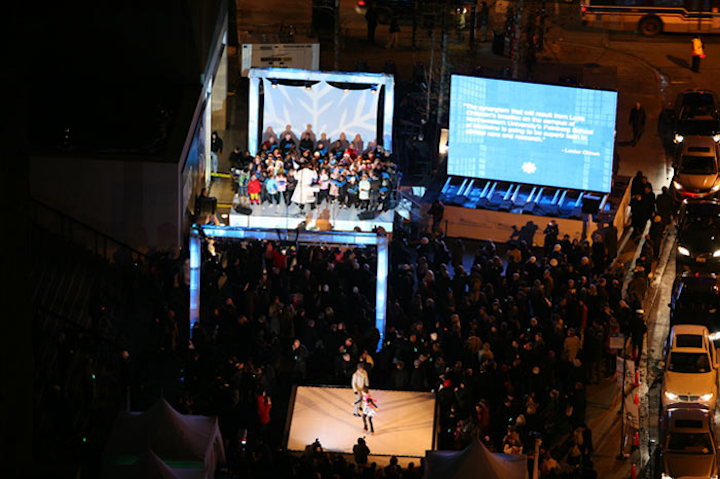 During the topping-off ceremony, an elevated skating rink, a stage, and a 20-foot LED screen overtook the plaza of the Museum of Contemporary Art.
Photo: Rick Aguilar Studios 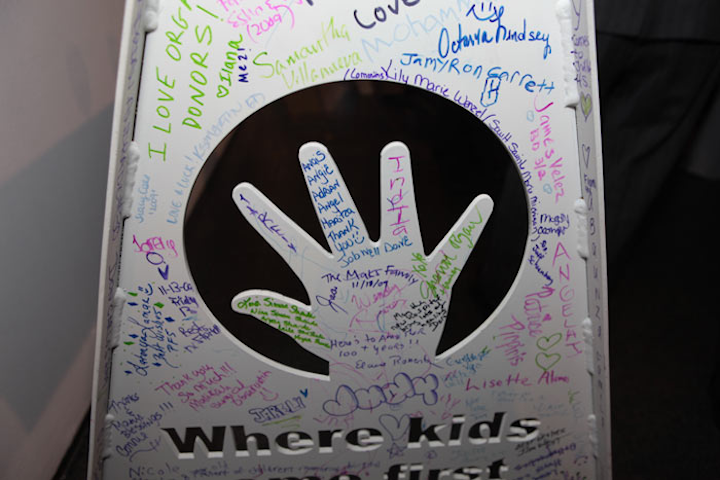 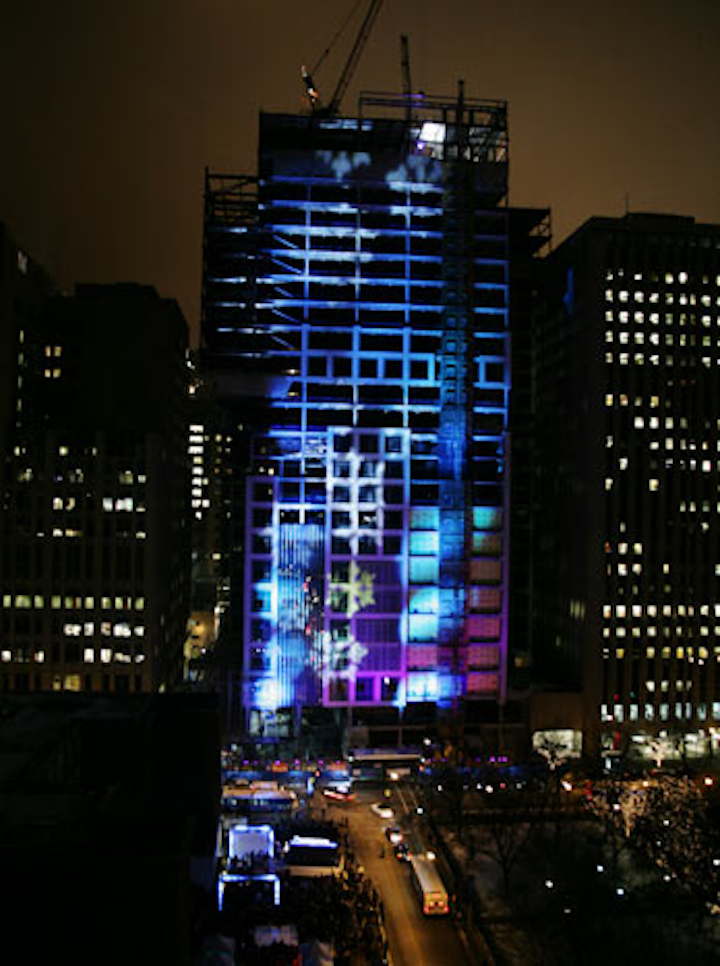 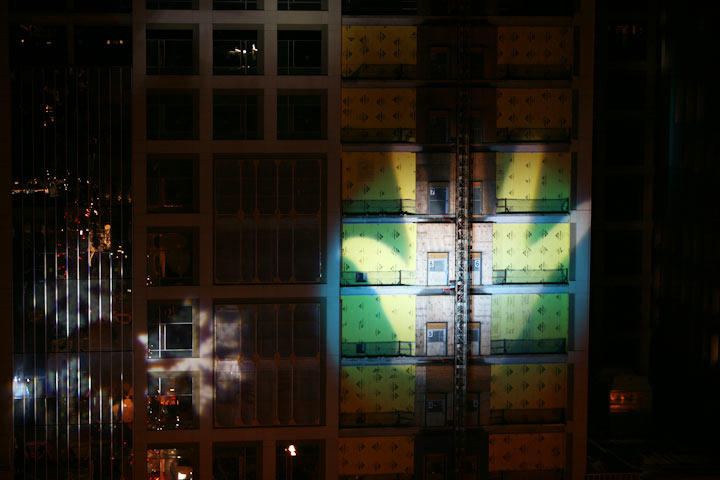 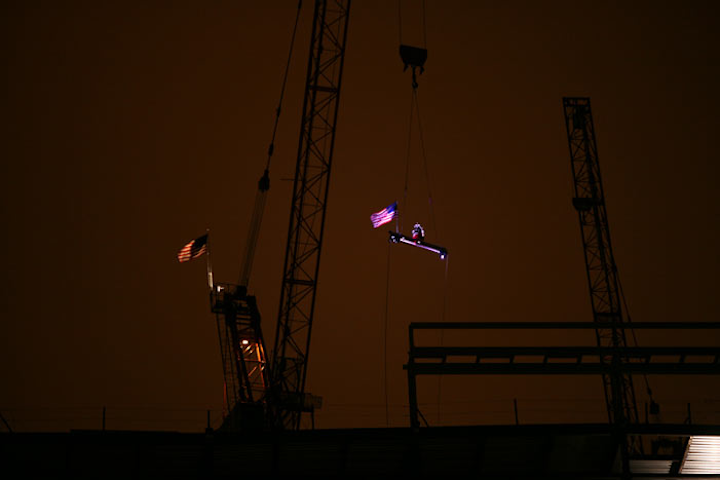 In keeping with a traditional topping-off ceremony, event organizers placed an evergreen tree and an American flag on top of the framework's final beam.
Photo: Rick Aguilar Studios 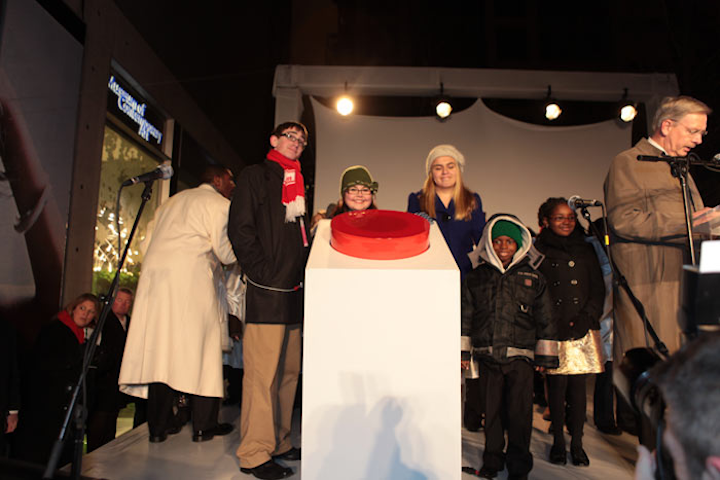 Patients from Children's Memorial Hospital took to the stage to lead a countdown before the new building was topped off.
Photo: Rick Aguilar Studios 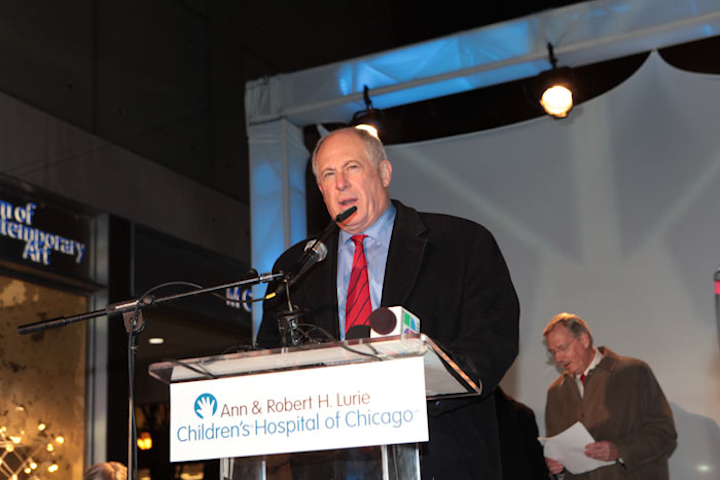 In his speech, Governor Pat Quinn quoted the poet Carl Sandburg, who wrote, "A baby is God's opinion that life should go on."
Photo: Rick Aguilar Studios 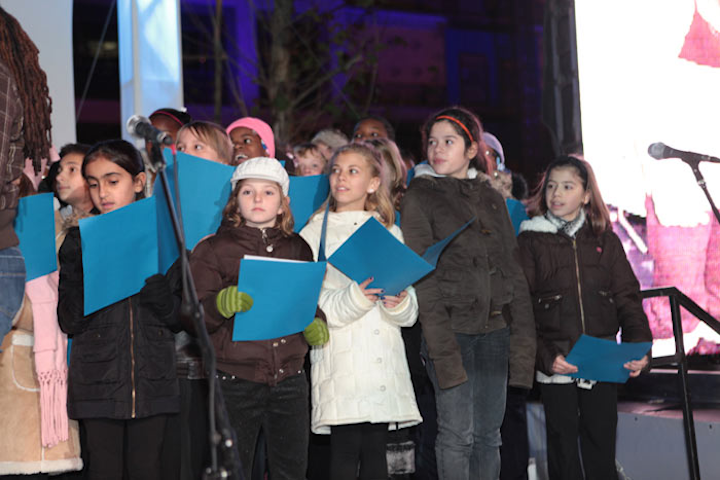 The One Accord children's choir sang holiday classics such as "Silent Night" and "Walking in a Winter Wonderland."
Photo: Rick Aguilar Studios 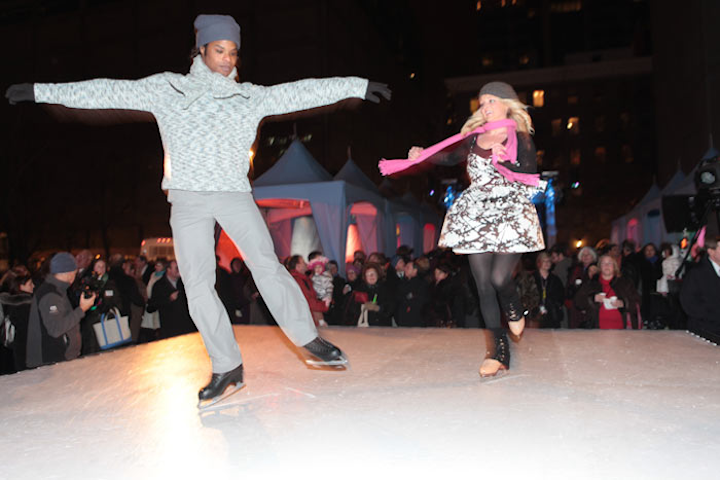 A pair of professional skaters twirled around on an elevated skating rink at the center of the plaza.
Photo: Rick Aguilar Studios
More in Chicago