Local, Diverse, and Happy: the 2014 Meeting Trends You Need to Know About

The IMEX Group offers trends for the coming year, developed with content from its conferences in Las Vegas and Frankfurt. 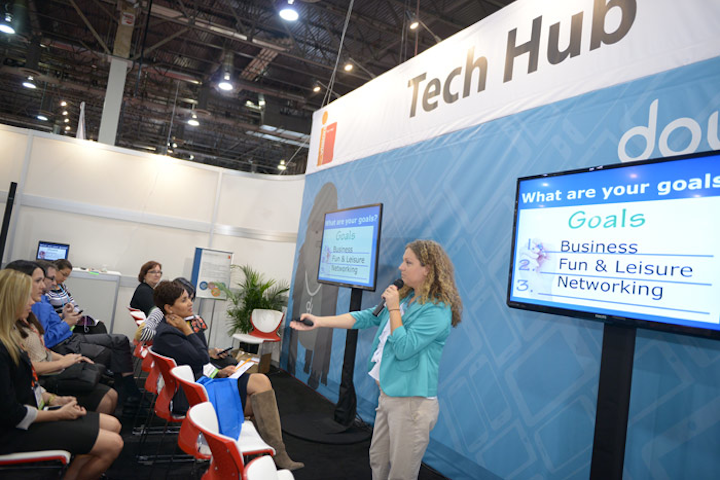 The IMEX Group offers a set of predictions for industry themes and trends in the coming year, with concepts pulled from the topics at Las Vegas's IMEX America and Frankfurt's IMEX conference.
Photo: Courtesy of IMEX

As the book closes on 2013 amid holiday festivities, attention is shifting to what next year holds for the meeting and live event industry. The IMEX Group, the folks behind Frankfurt's IMEX and Las Vegas's IMEX America conferences, has some predictions for trends and changes in 2014. Here's a look at what you can expect to evolve next year.

1. Content will condense
With attendees' attention spans are ever shrinking, look for meeting and event content to become more engaging and entertaining—not to mention sound-bite-y and tweetable. “The attention span of our attendees is a big factor," said professional emcee Glen Thayer (known as "the Voice of Meetings and Events"), at IMEX America. "My tolerance for a YouTube video is 60 seconds and I’m done. That’s a big challenge—both at the physical live event and online.”

2. Happiness will matter
The IMEX Group points to the growing importance of what it calls "workplace spirituality," with an increasing number of companies acknowledging the importance of employees' loyalty and inspiration to the bottom line. So the industry can expect more organizations to embrace a culture of balance and happiness in the coming months. “When values, vision, and purpose in individuals and organizations come together, the impact can be so positive, and it’s about much more than a happy worker being a productive worker,” said C.E.O. and so-called "Chief Happiness Officer" of Delivering Happiness Jenn Lim, speaking at the IMEX America MPI keynote this year. (Delivering Happiness is a company that Lim co-created with Zappos C.E.O. Tony Hsieh to inspire joy in work, community, and life.)

3. Technology will get more connected
Look for the meeting industry to continue to work toward greater connectivity, with the boundaries between online and offline further blurring. (And you can say goodbye to the term "hybrid," as every event moves toward such multifaceted experiences.) DoubleDutch C.E.O. Lawrence Coburn said the bandwidth of apps will "get lighter," and Eventgenuity C.E.O. Michael Owen said the future is “not about more technology but how that technology is delivered" at IMEX America.

4. Social media's dominance will deepen
In 2014 social media will likely be supported by its own distinct budget and will play a more measurable part in marketing and communications strategies all across the event industries. Speaking at IMEX America, Redbutton.tv president Sam Stanton said: "Everyone’s had their first go at social media. Now it’s time for phase two. Expect to see some really cool crossover where participants who are highly social at home find they can still behave that way at an event.”

5. Meaningful meetings will continue to rise
The 2014 IMEX Challenge will involve building a new healing garden at the Shade Tree shelter in Las Vegas surrounding next year's event. It's an example of the growing sustainability trend toward keeping sourcing local and supporting local communities. Moving away from the trend of meetings supporting groups in need across the world, now the goal is to support people in a meeting's immediate surrounding area. In Frankfurt, IMEX supports the Lichtblick Homeless Shelter and Maisha’s Sewing Project. And in the group's hometown of Brighton, England, it supports homeless charity the Clocktower.

6. Meetings' financial importance will get noticed
Watch for meetings to get proper attention as the important economic indicators they are. Economic impact studies are now de rigueur in at least five big markets, and they've been executed with exacting standards. During this year's government shutdown, President Obama responded by requesting a meeting with U.S. Travel Association C.E.O. Roger Dow. Consider that in contrast to the rhetoric surrounding meetings after the A.I.G. debacle. “Those of us in the industry know that when meetings and events start to rise they are the pulse of growth," said Social Tables C.E.O. Dan Berger at IMEX America.

7. Attention to diversity will become even more important
With various generations—all with different work ethics and characteristics—working alongside each other, and issues related to gender equity and racial diversity still being addressed, companies will continue to examine their recruitment and talent development strategies, approaching them with more awareness and creative solutions.