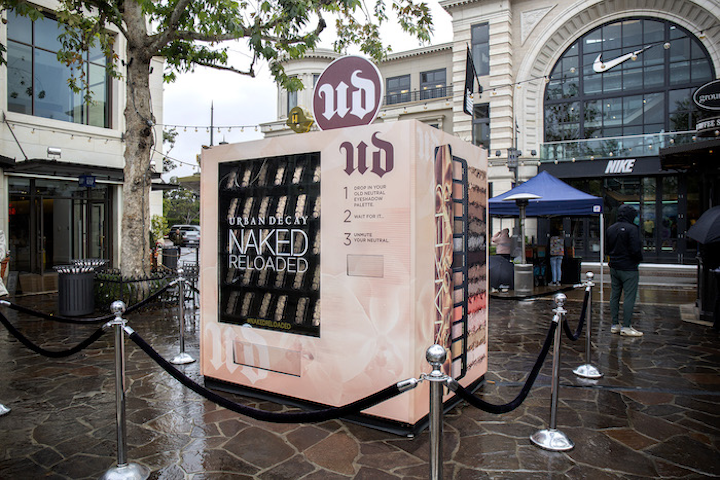 Urban Decay promoted its new Naked Reloaded Palette with a vending machine activation last Sunday at the Grove. Fans could drop off old eyeshadow palettes and in return receive the brand's new product; more than 500 palettes were given out within an hour. Paperwork created the activation, while 11th St. Workshop handled scenic production.
Photo: Courtesy of Urban Decay

Moves & Milestones
Chefs Suzanne Goin and Caroline Style, co-owners of the Lucques Group, have been tapped to run all food and beverage for the upcoming Proper Hotel downtown. The highly anticipated 148-room hotel is slated to open this summer, and will feature interior design by Kelly Wearstler. (The 271-room Santa Monica location is slated to open in May.)

West L.A.'s popular hamburger joint the Apple Pan got new owners this week for the first time since 1947. Previous owner Sunny Sherman, the granddaughter of the eatery's founders, sold the establishment to entertainment executive Irving Azoff and his wife, Shelli.

In Case You Missed It
It was a big week for L.A. news, centered around our coverage of the Grammy Awards' biggest parties; click through for stunning event design from the Recording Academy, Roc Nation, Steven Tyler, and more. Also, we chatted with event designer Billy Butchkavitz about his all-time favorite venues, Mirrored Media's Justin Lefkovitch about creating events for today's tastemakers, and Mark's Garden's Michael Uncapher about award-show floral design.

In the News
Hollywood bigwigs such as George Clooney, Robert De Niro, and Christopher Nolan have signed an open letter asking Oscars producers to reverse the decision to present four major categories during commercial breaks. The Hollywood Reporter: "The Academy quickly responded to the open letter on Wednesday with its own letter to members, assuring them that 'no award category at the 91st Oscars ceremony will be presented in a manner that depicts the achievements of its nominees and winners as less than any others.' The Academy also asserted that the branches of the affected categories had 'volunteered' to go first this year." https://bit.ly/2TQIOxA

During Tuesday's State of the State address, Governor Gavin Newsom announced plans to scale back the high-speed rail project that would allow riders to travel from L.A. to San Francisco in under three hours. Curbed: "Under Newsom’s revised vision for the project, passengers may only be able to ride between Bakersfield and Merced. ... A business plan released last year indicated that connecting San Francisco to Anaheim would cost more than $77 billion." https://bit.ly/2SRWk6V

Nicki Minaj, who was slated to be the biggest headliner of the BET Experience festival this summer, dropped out after the network posted an offensive tweet about the rapper. Attempting to fuel drama between Minaj and Cardi B, who won best rap album at the Grammys on Sunday, BET tweeted news item about the win with a headline that read, “Meanwhile, Nicki Minaj is being dragged by her lacefront.” Los Angeles Times: “The loss of Minaj and her labelmates are a massive blow for the event, set for June 20-23 at L.A. Live, which has recently struggled to recapture the buzz it had during its infancy. The superstar rapper previously headlined the festival in 2015, a showing that was marred by so many production issues that a visibly irritated Minaj called out BET and festival promoters during the performance." https://lat.ms/2WSFV1r

Surprise Event Metric of the Week
$80,000—the amount of money Areosmith's Joe Perry's guitar sold for during Steven Tyler's second annual Grammy Awards viewing party and live auction on Sunday night. Perry used the guitar for a live performance later in the evening, which raised $2.8 million for Janie's Fund, a nonprofit that helps victims of abuse and neglect.

Venue Buzz
Ricardo Zarate's latest restaurant, Pikoh, opened on February 4 in West Los Angeles. The 3,400-square-foot space holds 110 guests in various areas, including a 15-seat bar, a front lounge, a sidewalk patio, and booth seating and four-top tables. The stylish space has white and wood decor, with skylights and plenty of greenery. The eatery serves American food with Latin, Asian, and other international influences.

Overheard
"You shouldn’t be afraid to fix things. What’s bad is when you get defensive."
—Goldenvoice president and Coachella co-founder Paul Tollett, talking to the Los Angeles Times about the festival's increase of female performers, new campaign to address assault and harassment, Kanye West drama, and more.

On the Scene
On Tuesday, we checked out Netflix's premiere for The Umbrella Academy, a new series starring Ellen Page that launches today. Designed and produced by Netflix's Amanda Van Goethen with MKG, the event had details like a neon-lined step-and-repeat, decorative props from the show, a GIF booth from the Bosco, and a temporary tattoo station.

What's Next
The inaugural edition of Frieze Los Angeles runs today through Sunday at Paramount Pictures Studios. The art fair will feature 70 contemporary galleries from around the world, plus a program of talks, films, and other events. Other art-related events this weekend include the 10th edition of Art Los Angeles Contemporary at the Barker Hangar, plus Modernism Week Palm Springs, which kicked off yesterday and runs through February 24.

In the entertainment world, Teen Vogue is hosting its Young Hollywood party tonight at the Los Angeles Theatre, a collaboration with Snapchat owner Snap Inc. And Oscars events will kick off next week, including a series of public programs at the Academy's Samuel Goldwyn Theater starting on Tuesday.