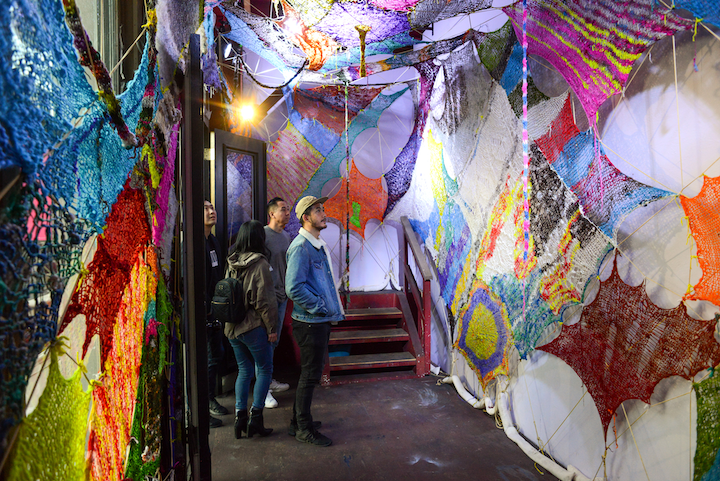 The second edition of Frieze Los Angeles ran from February 14 to 16 at the Paramount Studios backlot. Owned by entertainment group Endeavor, the international art festival drew more than 35,000 people, plus works from some 75 local and international artists. In one highlight, local multidisciplinary artist Channing Hansen transformed a townhouse on the studio's New York set into an immersive space inspired by Star Trek and other science fiction. Using hand-dyed and spun wool, Hansen crafted intricate, colorful weavings that filled the space and evoked patterns of cellular biology. Click here to learn more about Hansen's process.
Photo: Casey Kelbaugh

Moves & Milestones
EventWorks has promoted Alisa Walsh to the role of co-owner and president, replacing former president Janet Elkins. Walsh joined the company in 2016 as director of business development.

Michelle Ellamae has launched Ellamae Productions, a design and production studio focused on social good events. "Our objective is to elevate social good events on minimal budgets to maximize fund-raising and profits, so that the organizations can expand their reach and growth," explained Ellamae, who formerly worked at Sequoia Productions. "We specifically target collaborating with organizations which promote equal education, female empowerment, and ending human trafficking."

In Case You Missed It
Now that award season is a wrap, we've rounded up the most inspiring event design trends from the most glamorous parties. Click through for plenty of adaptable ideas for color schemes, wallpaper and carpeting, branding, and much more.

And speaking of design inspiration: We took a look inside a truly over-the-top, Salvador Dalí-inspired birthday party. Feast your eyes on the photos, then listen to designer Marc Friedland share behind-the-scenes details in this week's GatherGeeks podcast. 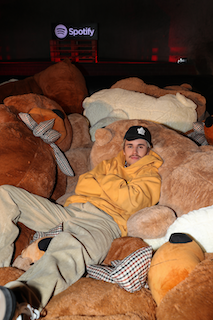 Bieber himself made a surprise appearance at the event.Photo: Alfredo Flores

Spotlight On
On February 14, Spotify hosted Justin Bieber's official Changes album launch party at Berrics skate park downtown. Dubbed the "House of Changes," the immersive event featured a series of vignettes designed to tell the story of the album, including a banquet inspired by the "Yummy" music video and a pit of oversize teddy bears inspired by Bieber's clothing line. In a black-and-white room, guests wrote their own "Intentions"—another song from the album—on the walls, plus there were photo moments that turned fans into the album cover star. Attendees also could customize T-shirts using decals designed by visual artist Gianpiero D’Alessandro.

In the News
Los Angeles has officially banned the use of exotic animals for entertainment and at events. The Hollywood Reporter: "The city council voted unanimously on the measure Tuesday, which applies to such animals as elephants, giraffes, and lions, but does not include horses. 'The issue of wild, exotic, and even dangerous animals being used for entertainment came to our doorstep four years ago, when a baby giraffe and elephant were being marched up the Hollywood Hills for a house party,' councilmember David Ryu stated. ... Wildlife conservationists (with proper permits) and the Los Angeles Zoo are exempt from the law."

Goldenvoice's newly announced Lovers & Friends Festival, which takes place May 9 at the Grounds at Dignity Health Sports Park, has raised concern after several artists denied their involvement. (Lil Kim has since posted an update to say she is actually involved after a discussion with promoter Snoop Dogg.) Complex: "Promotional powerhouse Goldenvoice took to social media on Tuesday to reveal the festival's first-ever lineup, which included acts like Megan Thee Stallion, Ludacris, Fat Joe, Jhené Aiko, Lil Kim, Summer Walker, T-Pain, and Saweetie. However, moments after the performers were announced, several of the billed artists began denying their involvement, leading some fans to believe the event wasn't legit. ... When reached for comment, a rep for Goldenvoice told Complex, 'Our festival is 100% confirmed. Lineups are always subject to change.'"

Johnnie's Coffee Shop on Wilshire Boulevard, which has been decorated with colorful murals of presidential candidate Bernie Sanders since 2016, reopened this week as "Bernie's Coffee Shop." The venue hosted a watch party for Wednesday's Nevada Democratic Party debate. CBS Los Angeles: "The watch party [was] followed by musical performances, speeches, and poetry. ... Sanders-theme food and beverages [were] available at the shop including Break Up the Banks Burgers, Health Care for All Hash Browns, Justice for All Jambalaya, and Coke No Koch drinks. ... After the primary election, the coffee shop will serve as a volunteer office for the campaign."

Surprise Metric of the Week
90,000: The number of people who reportedly registered for tickets to the Kobe Bryant memorial in the 24 hours since they went on sale. Many seats at the 20,000-seat Staples Center—which is hosting the February 24 memorial—were reserved for invited guests; for the remaining seats, Ticketmaster selected fans at random, who could then purchase a maximum of two tickets at $224 or $24.02. Proceeds will be donated to the Mamba & Mambacita Sports Foundation.

Venue Buzz
The Academy Museum of Motion Pictures will open on December 14. The museum says it has raised 95 percent of its $388 million pre-opening goal, and construction on the interior's four floors is slated to begin soon.

The Kimpton La Peer Hotel has been awarded four-star status by Forbes Travel Guide. The 105-room property is the first West Hollywood hotel to earn the status.

Overheard
"We are embracing the dream that music can bring to get us to a better place—for our fans, for our people, for our communities, and for our planet. We envision a tomorrow where festivals live and breathe the extraordinary—Virgin Fest looks to lead that charge.”