Insider Tips for Events From Facebook, Melt, Mirrorball, and More

Find out the ideas these experts shared with attendees at BizBash Live: Florida 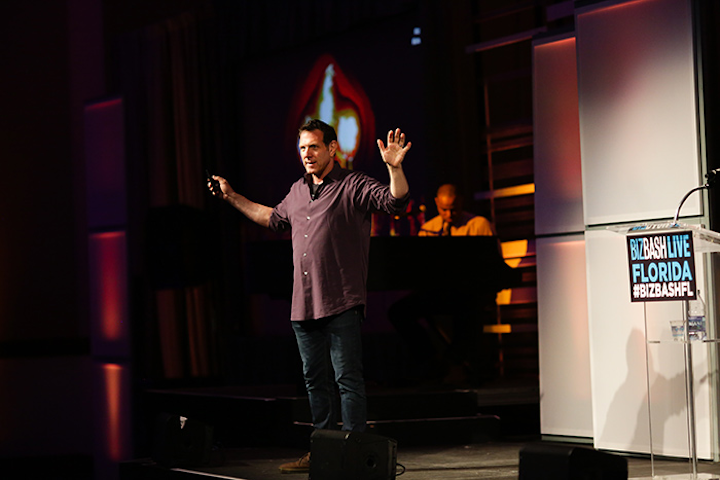 Mirrorball C.E.O. Michael Blatter spoke at about the art and science and live experiences at the Event Innovation Forum in Fort Lauderdale.
Photo: Creative Focus

Tips regarding strategy and creativity for event production, marketing, sponsorships, catering, and more filled the program at the Event Innovation Forum at BizBash Live: Florida on Thursday at the Greater Fort Lauderdale/Broward County Convention Center. Here are some of the key messages from speakers from Facebook, Melt, Mirrorball, and more.

Multicultural Marketing
Cassandra Clark, client partner at Facebook, explained why and how to market events to a multicultural audience. According to Clark, 38 percent of U.S. residents identify as multicultural; by 2019, 50 percent of kids will identify as such, and by 2020 the spending power of U.S. Hispanics is estimated to be $1.7 trillion. To engage these audiences, Clark said brands and planners should understand that the language used in messaging is important.

“U.S. Hispanics see brands that advertise in Spanish in a more positive light,” she said. “We’re talking about an emotional connection that people can relate to and how much your message can resonate.” Videos are one of the best ways to reach a multicultural audience, she said, because, “U.S. Hispanics and African-American affinities are more likely to create video posts, like video posts, and consume video content for longer."

Clark said marketers should use Facebook and Instagram since the U.S. Hispanic affinity audience spends 32 percent of every minute on their phones using one of those platforms. This means also adopting a mobile-first mentality. “Think about mobile landing pages: If you know people will find your content and learn about your event and share your event and talk about your event on their mobile device more than anywhere else, I strongly encourage you to start building with that in mind,” she said.

Event Design
Michael Blatter, founder and C.E.O. of the experiential agency Mirrorball, shared how his firm uses what it calls “emotional memory design”—a framework that “flips experience design on its head” and instead starts from a scientific standpoint regarding how to trigger powerful, long-lasting memories in the brain. Mirrorball is developing an app known as EMOT, which stands for emotional memory outcomes tool, that will be used to determine which emotions an event needs to trigger in order to influence desired behaviors among guests.

“You can think about what exactly you are designing and more importantly, what memory you are influencing,” he said. It’s critical for planners to drill down to the targeted emotions they want to evoke in order to create a meaningful experience. “If someone says ‘I want some surprise and delight,’ that’s like anything you do. It’s all surprise and delight. But if you say, ‘Give me some wonderment’ or ‘Give me some enchantment,’ that’s a big difference. If I’m designing an event for wonderment, it will have a lot of awe in it. Enchantment will have a lot of fantasy in it,” he said.

Catering
Michael Schwartz, chef and founder of the Genuine Hospitality Group, answered questions from BizBash executive editor Beth Kormanik. Schwartz has recently expanded beyond his restaurants to offer catering services, and he said he believes “curating an experience” is just as important as the food. When working with large groups, Schwartz said he prefers quality over quantity. “Our approach has been to keep it simple. I’d rather cook three things instead of 10 and have every one of those be perfect and simple and well-executed,” he said. Schwartz encouraged planners to do research and ask questions to ensure “local and fresh” are not just buzzwords their vendors are touting. “The movement has certainly blossomed … now you have to sift through which restaurants or caterers or vendors are telling the truth,” he said. “I’m always skeptical.”

Corporate Sponsorships
Creativity can spur new opportunities for sponsors at events. Vince Thompson, founder and C.E.O. of Melt, said his mindset is that anything that can be consumed visually is a media platform. “I don’t see walls, I see a billboard,” he said. Items such as plates, napkins, cups, and bars can be used as sponsorship properties, and event staff can also be engaged to communicate the desired message and tone, such as asking bartenders to thank guests on behalf of specific sponsors.

Fund-Raising
For nonprofit events, Christopher Pastor, director of corporate foundation relations at Pérez Art Museum Miami, said personal communication is critical. To sell tickets to fund-raising events, Pastor sends a personal email to anyone who bought at ticket to the event last year. He also reaches out to individuals who have made donations to the museum that are equivalent to the price of ticket.

“So if your event ticket price is $2,500 I would send out a personal email to everyone who’s ever given your institution $2,500 or more and invite them to come to this event because you know that’s already within their spending capacity,” he said. The museum also hosts a variety of events throughout the year that Pastor called “no-ask moments of engagement,” when the focus is on “cultivation and stewardship” of current and future donors instead of fund-raising.

Crisis Management
David Sinopoli, founder of Miami’s III Points Music, Art & Technology Festival, shared how he dealt with two devastating and unpredictable incidents in 2016—the Zika virus and Hurricane Matthew—that hit in the critical days leading up to the event. The result was that they sold just 400 tickets for the festival, far below their goal of 4,000, and were left in debt. But Sinopoli said he and his colleagues maintained a positive attitude and now they already have a headline act lined up for the 2017 festival, which has helped them pre-sell 7,000 tickets and pay off that debt.

“For me it comes down to that when you believe in something and you are really focused on it, your attention is set on it and you have really fantastic people around you … that no matter what comes at you as long as you can want to keep calm, look for the best way to work through whatever the issue is … and keep opening back up," he said. "Stay resilient to your idea, and it comes around."