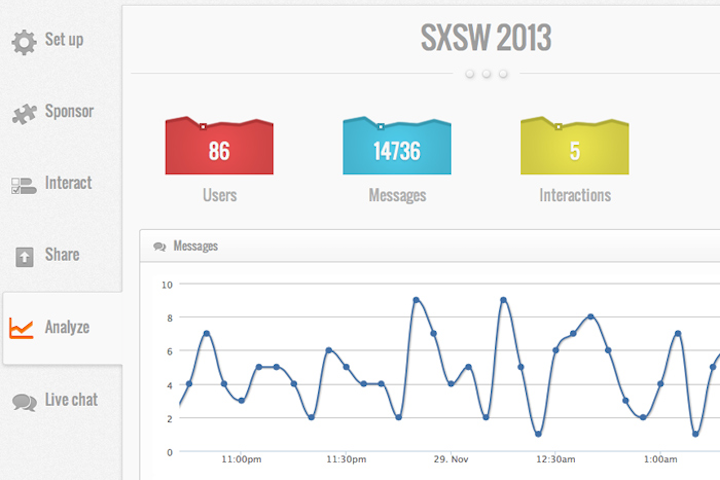 Topi is a new mobile app aimed at meeting the needs of both attendees and planners of conferences, meetings, and other professional events. Co-founder David Aubespin, a former Google engineer, developed the app, which launched Monday, based on his personal experiences attending conferences. “Networking is a very important thing. But it always seemed like it was too much left up to chance,” he said. Topi aims to make networking connections more strategic by helping attendees identify like-minded peers. For planners, it provides an instant way to communicate with attendees, share information about sponsors, and analyze user interactions.

Planners manage the app and communicate with attendees through Topi’s Web site. The first step in setting up the product demonstrates one of its most unique features: geo-fencing. The planner uses Topi’s mapping tool to draw a perimeter around the event location, which may be a single site such as a convention center or multiple locations around the world for people participating remotely. Attendees within those perimeters, whether inside or outside the actual venue, can access the event on Topi to communicate with other attendees and get event materials.

The user interface is based on chat rooms. Attendees log in to Topi using Facebook, and the app can also link with Twitter, Foursquare, Instagram, and LinkedIn. Those social networks provide information about the user’s background and interests, and Topi uses that information to create discussion groups based on attendees’ commonalities, such as where they went to college or where they have worked. It also infers areas of interest: a person whose LinkedIn account indicates a past job at Google, for example, would have access to a chat with other attendees from Google, as well as general chats about the Internet and technology. “We facilitate group conversations because psychologically it’s much easier for people to break the ice that way,” Aubespin said. Chats can take place in public chat rooms, in groups, or privately one-on-one, and the communication can be via text, photos, recorded audio, maps, and sketches. The chat remains accessible once the event has ended.

The “everybody” feed is a live chat of everyone at the event (and it can be embedded on the event Web site or displayed on a screen, much like a Twitter feed); it’s also where notifications from the event host appear to attendees. For example, planners can share files such as speaker notes or a revised agenda, and the user can open the documents in the app or email a copy to themselves for future access. Planners can also use the app to send surveys to gauge attendees’ sentiments in real-time and retrieve results immediately.

Sponsorships with Topi are also available. Sponsors’ logos can rotate within the app and can include a hyperlink back to the company’s home page or another Web site. Planners can also offer sponsors the opportunity to push messages and materials directly to attendees.

Topi is a free app available for iPhones, iPads, Windows phones, and Android devices. Planners pay a fee to use Topi for their events, but the pricing plans will not be available until the end of December.