Find out how these event organizers successfully made the quick switch from IRL to digital. 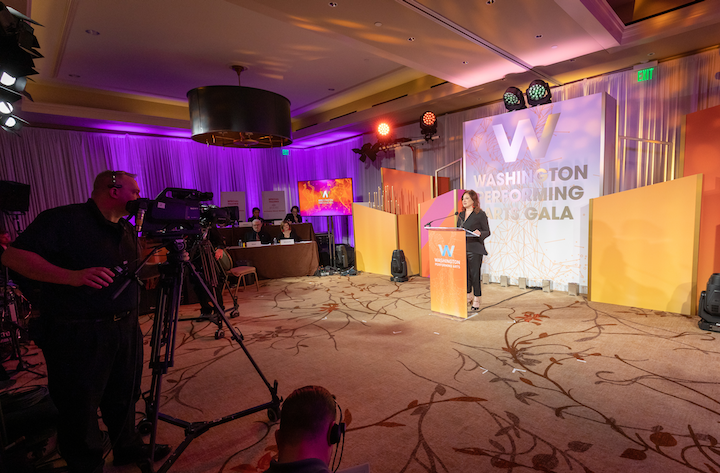 Earlier this month, Roger Whyte and his team at RJ Whyte Event Production were prepping for the annual Washington Performing Arts Gala, which was to take place on March 14 at the National Building Museum.

Then on March 11, just three days before the gala, the city’s mayor declared both a state of emergency and a public health emergency in an effort to curb the spread of COVID-19, thus canceling or postponing non-essential large gatherings. But instead of nixing the gala or rescheduling, Whyte and Washington Performing Arts decided to go virtual. 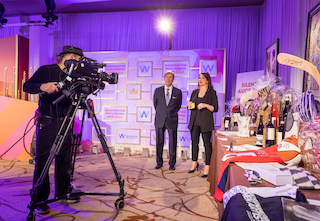 The gala’s silent auction was already using an online platform, OneCause. “During the livestream, we had the opportunity to tour some of the auction items and highlight them,” Whyte explained.Photo: Kalorama PhotographyMaking the switch from IRL to digital has become the new reality for many event planners and producers who were in the throes of prepwork when the outbreak began. Cassandra Strupp, program manager for the Professional Dairy Producers of Wisconsin (P.D.P.W.), recently had to rejigger the organization’s business conference—which was slated for March 18 to 19 at the Alliant Energy Center in Madison, Wisconsin—into a totally online experience.

Below, find out how she and other event pros and organizers pivoted from in-person events to virtual, and get some insight into going digital.

Reconsider the Location
Strupp said the biggest challenge of going from in-person to virtual was the time crunch and scrambling to find another suitable venue space. The event “was originally supposed to take place at the Alliant Energy Center. Due to the cancellation, we were then tasked with finding a location where the speakers could present while honoring social distancing and have a strong dependable internet connection.” The conference ended up taking place at the Monona Terrace Community and Convention Center, where nearly 40 speakers presented remotely via video, with support from a technician from video platform service Mediasite Events.

For the Washington Performing Arts virtual gala, Whyte had to downsize from the National Building Museum [which is closed due to the pandemic] to the Salamander Resort and Spa; Whyte immediately reached out to gala honoree Sheila Johnson, C.E.O. of Salamander Hotels and Resorts, about hosting the event at her property. 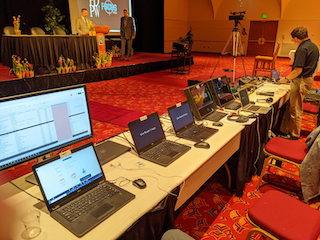 “For the live speakers, once [they were] set up in front of the camera, they joined a ‘virtual speaker ready room’ where a Mediasite technician handled all the technical aspects throughout the presentation to ensure a smooth experience,” Strupp said.Photo: Courtesy of P.D.P.W.Set Up the Right Tech
Whether it's a gala, conference, or dance marathon, the event will dictate the type and quantity of technology you'll need. For example, the end result of the P.D.P.W. conference, which featured a robust lineup of speakers and programming, was an integration of both live and pre-recorded presentations, meaning organizers employed two different setups.

“Once the content was captured, it was uploaded to a portal that is accessible by the virtual registered attendees where they can see playlists for each track as well as interactive engagement features like live chat, polls, speaker Q&A, etc.,” Strupp explained.

“For the live speakers, once [they were] set up in front of the camera, they joined a ‘virtual speaker ready room’ where a Mediasite technician handled all the technical aspects throughout the presentation to ensure a smooth experience.” Audio Visual of Madison provided the camera gear and microphones as well as the switcher to execute the recordings, and attendees could access the conference and recorded sessions via the P.D.P.W.’s mobile app. 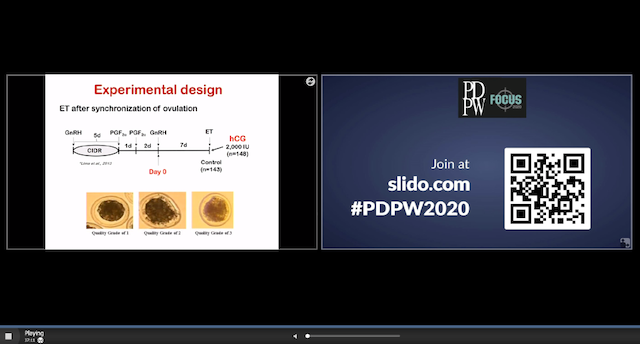 The P.D.P.W. conference content was uploaded to a portal that was accessible to the virtual registered attendees.Photo: Courtesy of P.D.P.W.Unlike the two-day dairy conference, the Washington Performing Arts Gala mainly needed to add in standard streaming functionality and additional computers for any Skype call-ins. Whyte enlisted vendor partners EventEQ and Showcall to handle the audiovisual and streaming aspects.

Plus, the gala’s silent auction was already using an online platform, OneCause. “During the livestream, we had the opportunity to tour some of the auction items and highlight them,” Whyte explained. The silent auction, which commenced the Sunday prior to the event, remained open after the event, allowing virtual attendees the chance to submit bids post-livestream.

Get Creative with Social Media
Instead of hosting an arena filled with sweaty co-eds, MacKay collected content, asking folks to send in videos of them doing TikTok dances or sharing what the nonprofit meant to them. “We did a bracket on Twitter to determine the TikTok dance winner where everyone could vote,” she explained. She also solicited videos from prominent figures including the university’s chancellor, head football coach Mack Brown, and even Olympic gymnastics gold-medalist Simone Biles, who all expressed their support. “We also had videos from families that our work has assisted explaining how much C.F.T.K. means to them and demonstrating the impact.” 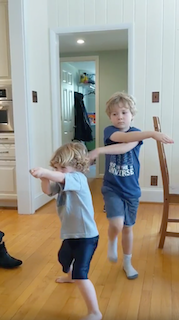 MacKay asked folks to send in videos of them doing TikTok dances or sharing what the nonprofit meant to them.Photo: Courtesy of C.F.T.K.MacKay, who planned to post 80 pieces of content across all social media platforms, plus the video submissions, was concerned followers would feel spammed. “I was very nervous that people would get annoyed and unfollow our accounts. Luckily, this didn't happen! We gained approximately 30 followers on Instagram, despite posting 12 times and having a super long story within 24 hours. I think this goes to show that if you make content relevant, your audience will care.”

Make the Virtual Event Easily Accessible
One of the possible upsides to going virtual is the inclusivity and greater impact. “The interesting thing about moving to livestream was that it allowed the audience to expand outside of just the guests who would have attended the gala,” Whyte explained. A YouTube link to the livestream was posted on the Washington Performing Arts website as well as on Facebook.

Strupp also noticed an uptick in attendance. She said that the annual in-person event typically draws over 1,400 industry professionals, while “the virtual event captured 2,292 live viewers over the two-day event, which is significant considering we had to transition from in-person to virtual event in just days.”

As for the virtual marathon, its social posts reached about 14,000 unique accounts, according to MacKay. “We had roughly 400 fund-raising dancers [people who were originally signed up to participate in the marathon with their own fund-raising pages], and around 40 people submitted videos,” she said. “Typically, we have around 700 students attend the in-person marathon. While we didn't have that many fund-raising dancers, I think this gave us the opportunity to reach a wider audience of alumni and people in the community who don't normally get to experience the marathon firsthand. Knowing that 14,000 people saw our content and learned about our cause makes me incredibly hopeful for the future of Carolina For the Kids.”

The organization raised over $250,000, with the proceeds going toward costs that health insurance doesn't cover, such as gas cards, utility bills, and meals, as well as research grants. 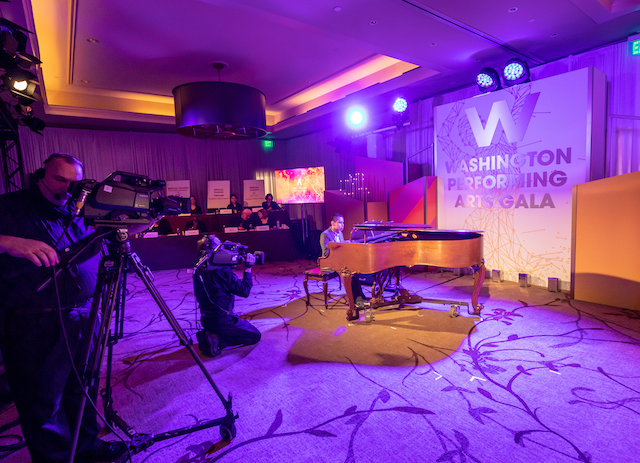 Pianist José André performed during the virtual gala.Photo: Kalorama PhotographyDon’t Forget About Decor
Since the Washington Performing Arts Gala, which was set to host an estimated 600 guests, was now being held in a smaller space, RJ Whyte Event Production’s decor partner Syzygy needed to scale down the main stage set. “For anyone who is familiar with the National Building Museum, they know how large the stage sets have to be to fill the space. We were able to literally cut down the height of the stage set to fit into our sound stage at the Salamander,” Whyte said. “We also used the already produced step-and-repeat as our secondary set. One of the main goals with the decor was to try and limit waste from what was already produced.”

Try to Donate What You Don’t Need
Of course, not all event elements can be repurposed for a virtual version. Whyte said that Ridgewells Catering was able to donate the food that would have been used for the gala’s dinner to Miriam’s Kitchen, a nonprofit organization that helps the homeless, and the decor team was able to donate the flowers to Bright Beginnings, which runs early childhood and family learning centers.

Whyte said, “One of our main goals with moving the event to virtual was to limit our waste as much as possible, and our vendor partners were resourceful and able to give to organizations that could truly benefit from the donations."