New to the Tribeca Film Festival this year was a juried category called Storyscapes, dedicated to crowd-sourced transmedia projects. To bring the five interactive film entries to life, the festival collaborated with gin brand Bombay Sapphire to stage the Bombay Sapphire House of Imagination presents Tribeca Film Festival Storyscapes, an immersive, off-site pop-up at Dune Studios that was open to the public April 18 through 21.

The goal of the free experiential event, produced by Pask Productions, was to give guests the opportunity to experience the interactive projects for themselves. Since the participating media projects—Journal of Insomnia, Robots in Residence, Star Wars Uncut, Sandy Storyline, and Exquisite Forest—each already had an online presence in some form, the challenge was to create engaging exhibits that matched the immersive, crowd-sourced nature of the projects themselves.

As a nod to the event’s D.I.Y. mentality, visitors were encouraged to concoct their own Bombay Sapphire gin and tonics, choosing from a selection of botanicals, homemade tonics, and garnishes. Festival-goers could borrow pre-programmed robots from the Robots in Residence project to film their own segments, which were then compiled into a short film that was presented on the last day.

The lounge space itself had a blue glow and was surrounded in a lightweight metal mesh fabric. “The concept for the lounge was to make the guests feel like they were inside a bottle of Bombay Sapphire,” said Alyse Pask, president of Pask Productions. “We installed the mesh to resemble an abstract representation of liquid.” 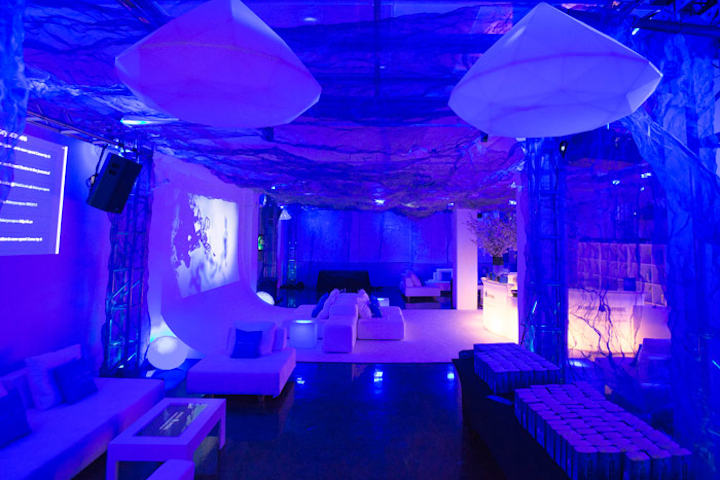 Designed to feel like being inside a Bombay Sapphire bottle, the lounge was awash in blue lighting with white lounge seating and lush floral arrangements on the bar. The lounge also had a live Twitter feed displayed on the wall.
Photo: Richard Patterson for Bombay Sapphire 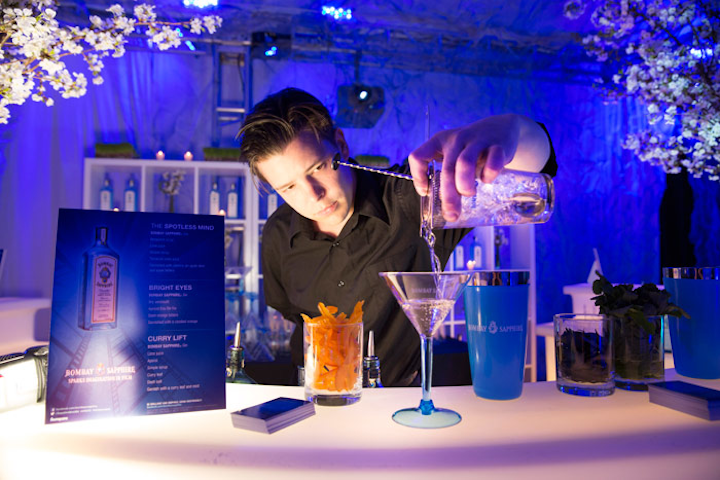 In addition to three signature cocktails,  the interactive Bombay Sapphire gin-and-tonic station let guests concoct their own drinks with a selection of 13 garnishes and homemade flavored tonics.
Photo: Richard Patterson for Bombay Sapphire 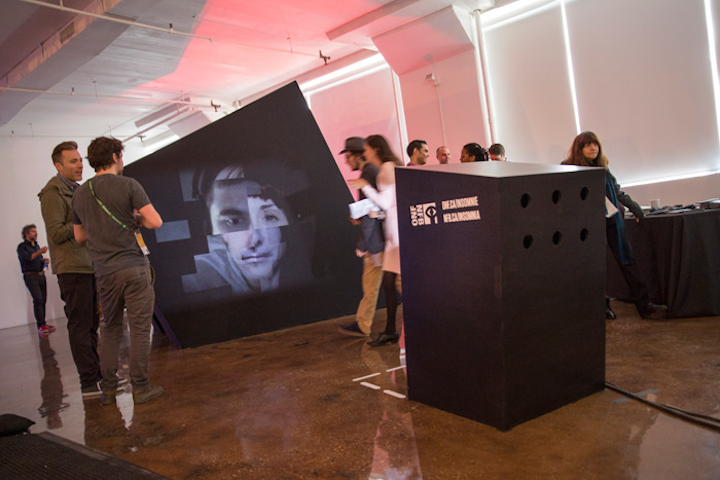 The Storyscapes pop-up offered a range of interactive media projects for guest participation. For example, Journal of Insomnia is a documentary project that gathers personal reflections on sleepless nights from insomniacs around the world. At the event, guests could enter a dark, enclosed space to recreate the feeling of sleeplessness while answering questions about the meaning of insomnia.
Photo: Richard Patterson for Bombay Sapphire 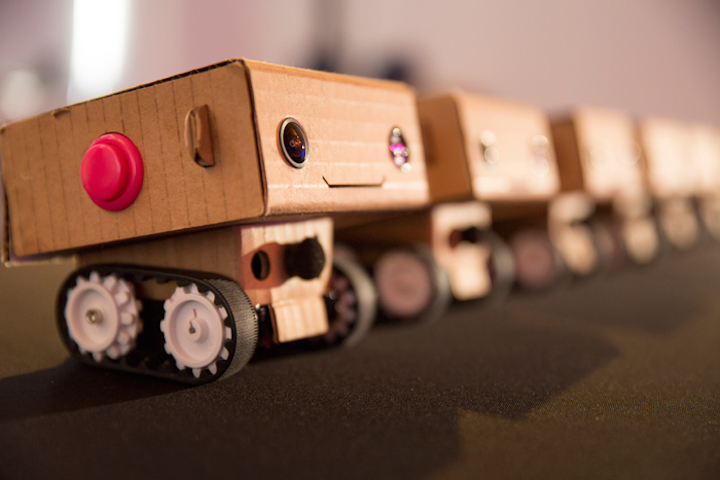 Robots in Residence was a project that used pre-programmed robots to direct and shoot ongoing documentary footage. At the pop-up event, festival-goers could borrow the tiny robots to film their own segments, which were then compiled into a short film that was presented on the last day.
Photo: Richard Patterson for Bombay Sapphire 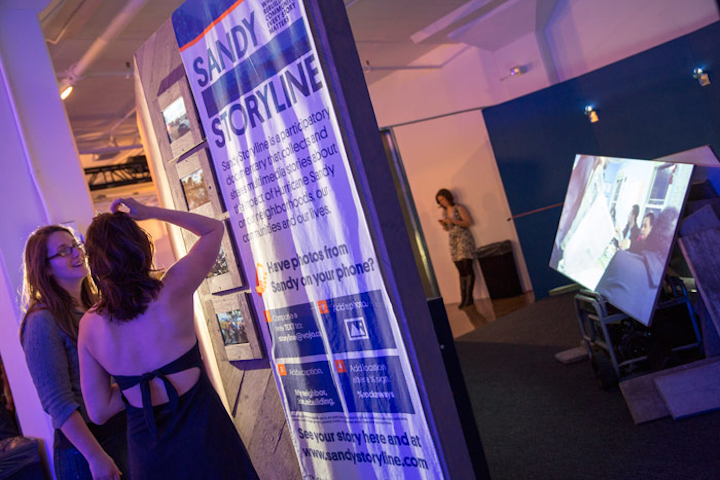 Sandy Storyline was a participatory multimedia documentary that invited those affected by the storm to share their experiences and efforts to rebuild. Attendees could add their own Sandy-related photos to the project by uploading them from their phones at the event.
Photo: Richard Patterson for Bombay Sapphire 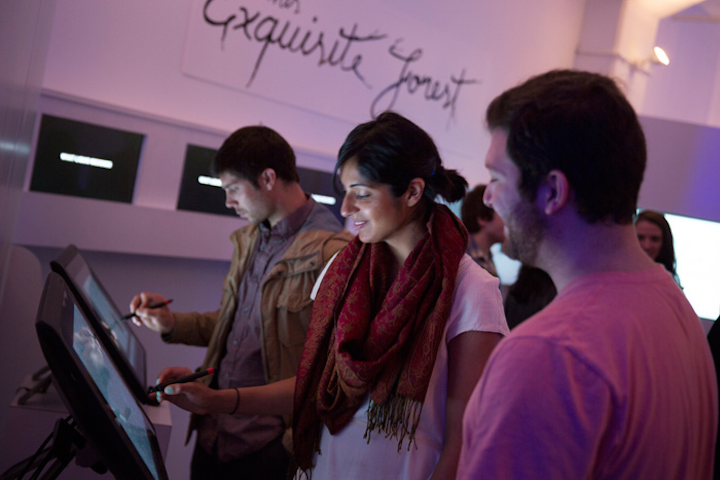 This Exquisite Forest was an online project that allowed users to create short animations via their Web browsers, and others could build on the drawings at any point to create branching narratives. At the event, festival-goers could add to the amateur animations by using tablets.
Photo: Richard Patterson for Bombay Sapphire 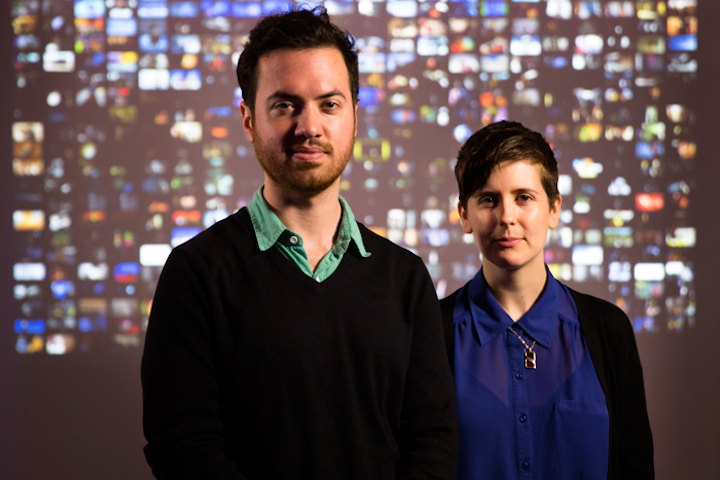 Star Wars Uncut was a mash-up remake of the iconic movie’s original scenes, as reimagined by fans. At the lounge, guests could navigate through the 480 crowd-sourced 15-second scenes by using an arcade-like controller.
Photo: Richard Patterson for Bombay Sapphire
More in Experiential, Activations & Sponsorships