Find out why organizers used formal, wedding-style invitations as a new marketing strategy.

The P.G.A. Merchandise Show is crediting an old-fashioned style of invitations with bringing new faces to the trade show that filled one million square feet of the Orange County Convention Center Wednesday to Friday. Organizers mailed printed invitations with response cards to about 20,000 P.G.A. professionals. About 7,000 came to the show, and more than half of that group had not attended the show in the past two years.

The show marked the kickoff of a 100-day centennial celebration to commemorate the founding of the P.G.A. of America in 1916, and the printed invitations were part of the overall strategy to focus on the contributions of the thousands of individuals that comprise the organization.

“We have a saying that says it’s not just business it's personal, and what’s more personal than an invitation like this,” said Ed Several, senior vice president and general manager of P.G.A. Worldwide Golf Exhibitions. “It was a tremendous hit because it broke through the clutter. The fact is email is something that maybe is getting too cluttered. It’s interesting that cyclically we are going back to a lot more of the snail mail in terms of breakthrough. And the piece itself being like a wedding invitation really … made the invitation very special and personal.”

The invitation included three R.S.V.P. options: attendees could respond via email, mail back the stamped response card, or call a concierge. In tandem with the printed piece, organizers scaled back their email marketing. A brief email went to all P.G.A. professionals alerting them to look for the invitation in the mail, and then targeted emails went to specific attendee segments, such as those interested in apparel or those interested in equipment. Organizers also worked with the P.G.A. of America’s 41 local sections to send personalized letters from those group leaders to their members.

“We definitely would not do the same type of invitation [in the future] because I think what made it special is the centennial,” Several said. "But there is definitely a foundation there that we’re playing with. So now we’re talking about what’s the next iteration of what would be special."

Also as part of the centennial celebration, organizers created a series of exhibits in the convention center lobby to showcase notable moments in the P.G.A.’s 100-year history. They also created a new lounge just inside the main entrance to the exhibit hall, with signage encouraging attendees to post on social media with the hashtag #ThxPGAPro.

More than 42,000 people from 91 countries attended the show this year, an increase of about 3 percent over 2015. In addition to the show floor with more than 1,000 exhibitors, the event included hundreds of educational sessions and an outdoor demo day at Orange County National Golf Center and Lodge. 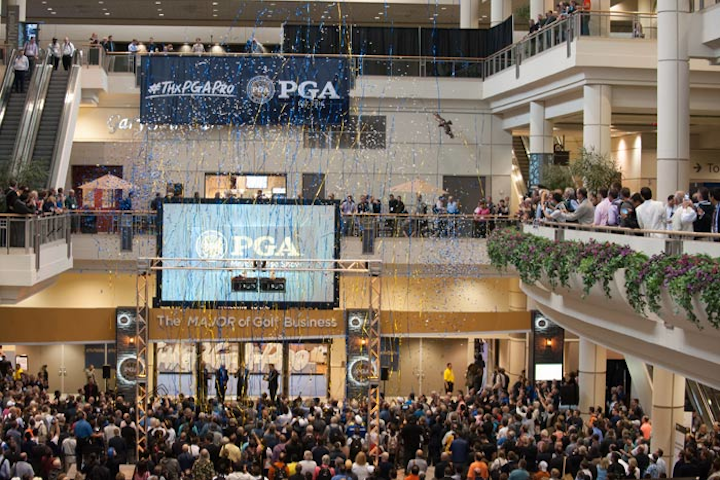 Streamers fell from the rafters during the show’s opening ceremony, which was broadcast live on the Golf Channel.
Photo: Traci Edwards/The PGA of America 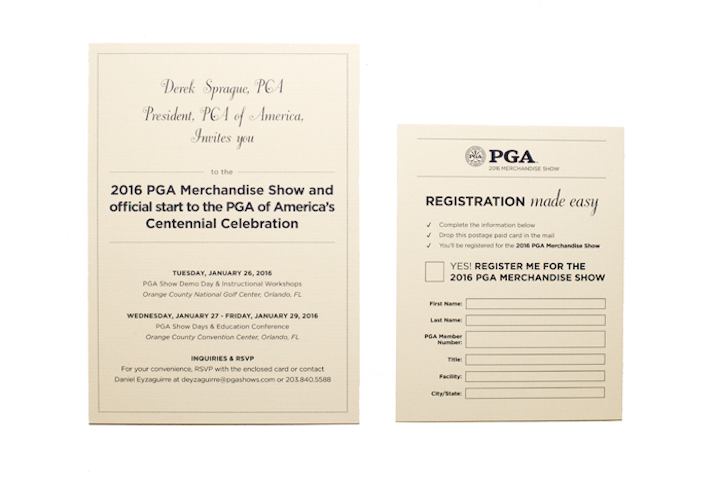 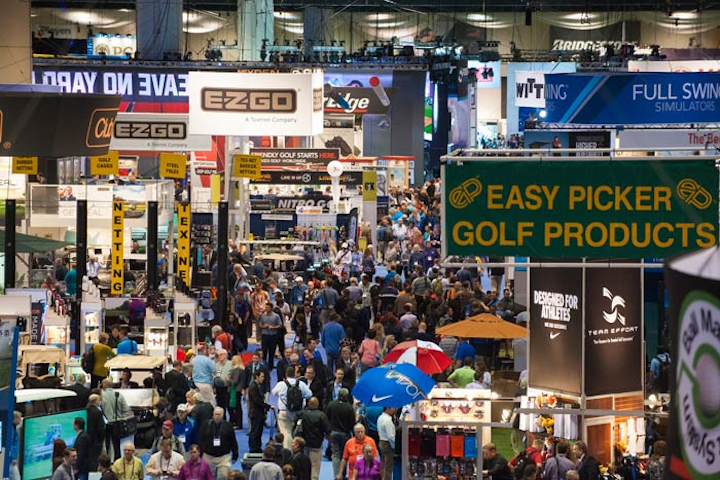 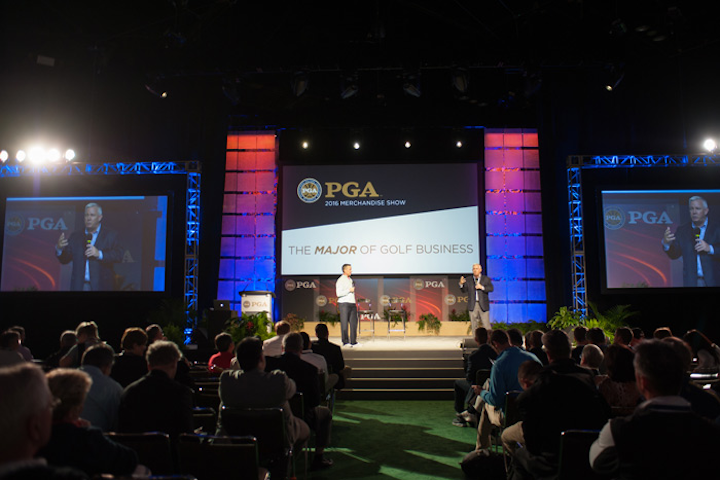 The P.G.A. Forum Stage, sponsored by Omega, was located on the show floor and served as the location for presentations and panel discussions by golf industry leaders.
Photo: Traci Edwards/The PGA of America 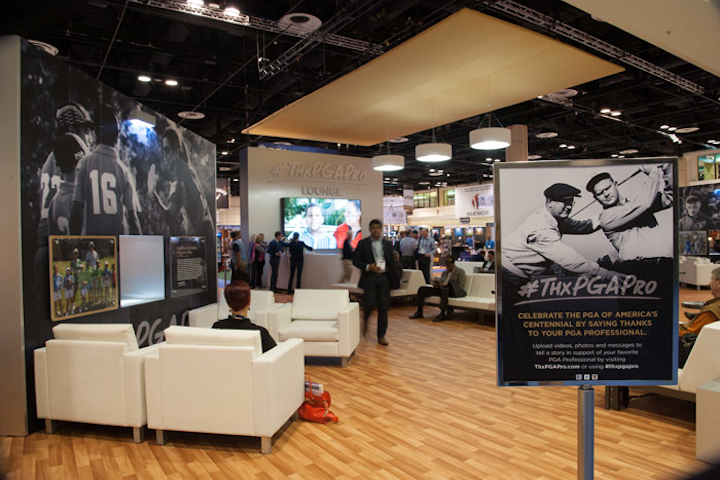 To commemorate the P.G.A. of America’s centennial celebration, organizers created a new lounge just inside the main entrance of the show floor. Signage in the lounge encouraged people to share how P.G.A. professionals have impacted their lives using the hashtag #ThxPGAPro.
Photo: Montana Pritchard/The PGA of America 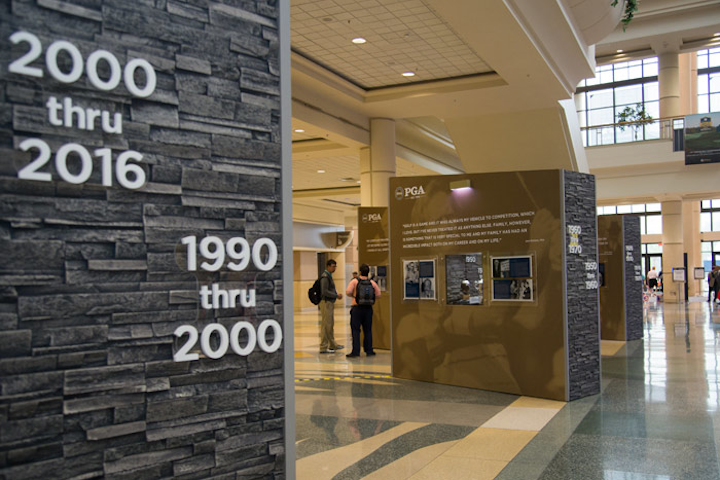 In the convention center lobby, organizers created a series of exhibits showing highlights of P.G.A. of America activities from its creation in 1916 to the present.
Photo: Montana Pritchard/The PGA of America 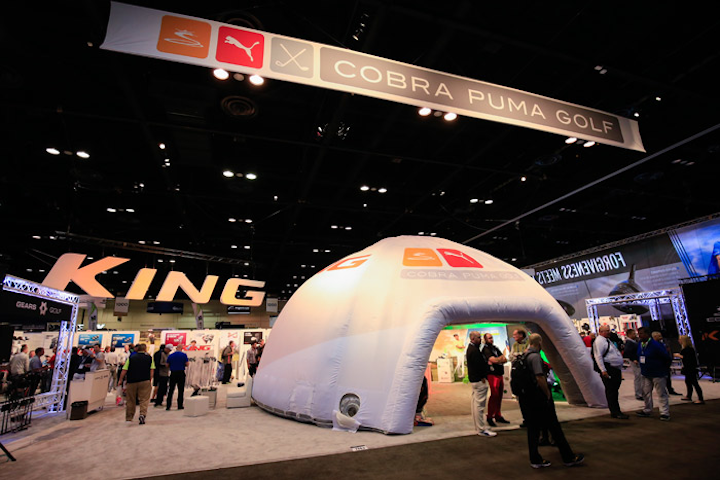 Cobra Puma Golf erected a large inflatable tent in the middle of its exhibit to attract interest from attendees.
Photo: Chris Trotman/The PGA of America
More in Printing & Graphics