The honorees, along with an early-career rising star, have decades of experience working in destination marketing, associations, corporate events, sports events, rentals, and more. 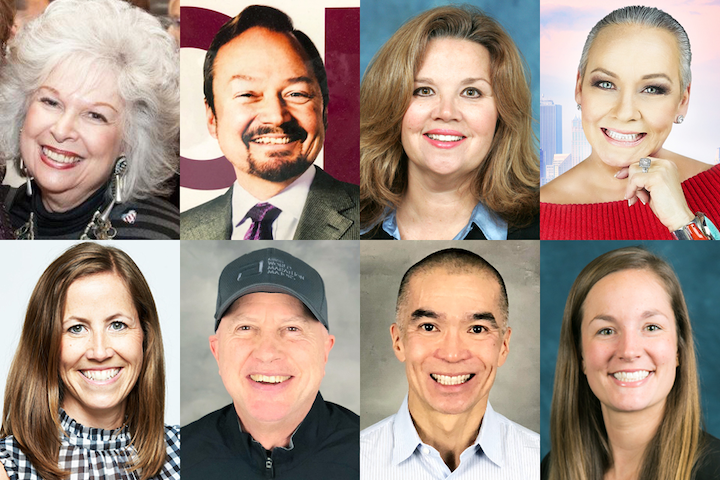 CHICAGO—Seven veteran event professionals from Chicago along with an early-career rising star will be inducted into the BizBash Hall of Fame at a ceremony May 15 at the Museum of Science and Industry.

Additionally, BizBash will honor Barbara Lee Cohen, president and C.E.O. of Productions USA Inc., with a lifetime achievement award and present a special honor to the Weinermobile.

The rising star honoree is Morgan Bucciferro, director of event operations at the Chicago Cubs.

Lori Adlesick
Vice president of industry relations and special events, Choose Chicago
Adlesick has been at Choose Chicago—the official destination marketing organization for Chicago and formerly called the Chicago Convention & Tourism Bureau—since the fall of 2000 and has served in her current role since 2014. She oversees Choose Chicago’s industry partnerships in addition to solely managing 100-plus events each year in support of the company’s goals to include large, multi-faceted industry events for several thousand as well as smaller, intimate client events. Additionally her responsibilities include fund-raising events, board and advisory board meetings, road shows, partner educational and networking events, consumer events, and trade shows. Prior to joining Choose Chicago, Adlesick worked as a national sales manager for Showtime Florists and started her career in the hospitality industry in 1996 with the Chicago Convention & Tourism Bureau working in the Bureau Services Department. She is a member of numerous organizations and has been a guest speaker at Kendall College and an adjunct professor at the College of DuPage in Special Event Management. Adlesick was recently awarded the Illinois Meetings + Events Magazine Best Meeting Professional 2016.

Candace Collins Jordan
Founder, Candid Candace
Jordan is the Chicago Tribune social columnist and Chicago Now blogger of Candid Candace, founder of CandidCandace.com, and the award-winning host of Candid Candace TV. During the course of her career, she has appeared on more than 20 national magazine covers, including eight for Playboy, was on a billboard in Times Square, featured in a Playboy Centerfold (December 1979), and appeared in the film Risky Business with Tom Cruise. Today, Jordan is involved in numerous charitable organizations and fund-raisers. She is a known style icon and has been featured as such in TCW magazine, Shore Magazine, In Focus magazine, and CS magazine. A number of publications have made note of her influence, and she was recently featured in Chicago Woman magazine’s list of “Fierce 50” women living in Chicago. Additionally, she was featured in the BBC One documentary Miriam's Great American Adventure. Recently, she filmed a segment for Collector's Call, a new show from Weigel Broadcasting, which will feature her and her husband's rare book collection. Since 1974, Jordan has been a champion and an advocate for Chicago, shining a light on the charities, people, and events that make it great.

Jack Luft
Owner, Hall’s Rental
Hall’s Rental has been a family-owned and -managed company since 1958 when Luft’s father, John, bought it when it was a storefront business with only two full-time employees. Luft, born and raised on Chicago’s North Side, worked there through high school and college, pausing from his role in the family business to attend law school and practice law for several years. He returned when his father’s business partner retired, and by that time, the event industry had grown tremendously. For more than 35 years, Luft and his brother Tom have owned and managed Hall’s. Today, Hall’s Rentals has more than 250 employees and operates from a 125,000-square-foot warehouse in Niles, Illinois. Luft’s son Patrick works at Hall’s along with Tom’s children. The legacy of customer service started with his father, who treated customers and employees like family.

Karen J. Malone
Vice president of meeting services and sales, HIMSS North America
Malone joined HIMSS, a global cause-based, not-for-profit organization focused on better health through information and technology, in November 1997 and has nearly 30 years in the meeting industry. At HIMSS, she oversees 18 staff members in the planning of the Annual Conference & Exhibition, a $45 million event that is ranked as show No. 23 on the nation’s top Tradeshow 200 list. Malone has also been responsible for overseeing the launch of HIMSS Meetings & Events globally. She managed a team to research, plan, and execute conferences throughout Europe and Asia. Under Malone's leadership, HIMSS received one of the highest honors in the trade show industry when the conference was recognized as “The Show with the Most Innovative Practices,” at the Trade Show Executive Gold 100 Awards & Summit. She is frequently featured as a speaker at industry events and is a contributor to various publications. Additionally, she has sat on a number of boards and has been the recipient of several significant industry accolades, including being named by Trade Show News in 2014 as Industry Icon of the Year.

Michael Nishi
Executive vice president, Chicago Event Management
At the event production company, Nishi oversees the production of all events with a particular focus in event operations and emergency response logistics. Since 1990, Nishi has partnered with Carey Pinkowski as general manager and executive race director of the Bank of America Chicago Marathon, respectively. With his extensive operational knowledge, Nishi was integral in guiding a local road race of 6,000 runners to a world-class event that saw over 44,000 marathon finishers in 2017. In addition to his work on the Chicago Marathon, Nishi is a driving force in increasing the exchange of ideas and best practices among events of all size and scope. Recognizing the unique issues of the endurance sports industry, Nishi founded the Race Management Program, which offers event organizers an intimate forum to share ideas with one another. As an active leader in the running industry, he continues to advocate for greater safety and security not only for Chicago Event Management clients but also for events around the world. An avid runner and cyclist, Nishi sits on the board of Girls on the Run Chicago.

Carey Pinkowski
C.E.O. & President, Chicago Event Management, and executive race director, Bank of America Chicago Marathon
Pinkowski joined Bank of America Chicago Marathon nearly three decades ago and has served as executive race director since 1990. During his tenure, the Chicago Marathon has expanded from 6,000 registered runners in 1990 to a record 44,341 finishers in 2017. Pinkowski is responsible for designing the race’s spectator-friendly course that traverses 29 diverse Chicago neighborhoods, starting and finishing in Chicago’s Grant Park. His design allows for more than 1.7 million spectators to watch the race, making the marathon an annual gathering for the entire City of Chicago. To commemorate his 20th anniversary as executive race director, the City of Chicago and Bank of America bestowed Pinkowski with an honorary street, named Carey Pinkowski Drive, located at the intersection of Monroe Street and Columbus Drive, the site of the race’s start line. Pinkowski has received numerous awards, including Runner’s World magazine’s Best Race Director Award in 2002 and USA Track & Field’s Allan Steinfeld Award for Lifetime Achievement in Men’s Long Distance Running in 2009.

Barbara Lee Cohen
President and C.E.O., Productions USA Inc.
After her plans to perform on Broadway were derailed because of health challenges, Cohen reinvented herself and went into radio, TV, and film writing in addition to advertising and promotional programming. A mentor guided her to develop her own company, which she incorporated as Productions USA Inc. More than 50 years later, PUSA has represented hundreds of Fortune 500 and 1000 companies, associations, sports teams, and regional organizations, creating award-winning exhibits, business theater, theme parties, conferences, and promo events. In addition, she has taught many event seminars at Columbia College and other academic institutions. Cohen is involved in a number of event and meeting planning associations, including serving as the first director and as a 50-year board member of Special Olympics Chicago. She also has served on the Chicago Convention & Tourism Bureau board for 26 years, as a volunteer chair of St. Joseph’s and Solace for the Children centers for 32 years, and a multitude of other civic and charitable projects. Additionally, Cohen has also rescued animals for 50-plus years and supports many other groups caring for animals, needy children, and seniors.

Morgan Bucciferro
Director of event operations, Chicago Cubs
Now in her fourth season, Bucciferro oversees parking and security services for all major events at Wrigley Field, including baseball games and concerts, and year-round activations at the Gallagher Way and the American Airlines Conference Center. Under her leadership in 2018, her team supported all regular and postseason games, nine concerts, more than 150 public events at Gallagher Way, and 300 private events in the American Airlines Conference Center. Examples of her projects at the Cubs include launching magnetometers at Wrigley Field in 2016 and designing the operating layout for Gallagher Way in 2017. Prior to working at the Cubs, Bucciferro worked for Red Frog Events as the director of Warrior Dash and as operations director of Firefly Music Festival. Bucciferro graduated with a communications degree from the University of South Carolina Upstate and was a collegiate volleyball player.