Chicago's Museum of Contemporary Art raked in $3 million at a fund-raiser that was filled with tentacles.

Japanese artist Takashi Murakami hasn't held a museum retrospective in North America in 10 years. So when it came time to open his exhibit "Takashi Murakami: The Octopus Eats Its Own Leg" at the Museum of Contemporary Art in Chicago this spring, a massive celebration was in order. Furthermore, the exhibit's opening coincided with the museum's 50th anniversary.

The June 3 gala that marked both occasions had a mashup birthday-party-pop-art theme—with ample octopus references throughout. The sea creature features prominently in the exhibition, which includes the 114-foot-work that inspired the art show's name. Comprising 35 panels, the work surrounds viewers in the museum's gallery.

The 600 guests were invited to wear "art-edgy attire," so party gear ranged from paint-splattered suits to golden sneakers. But Murakami himself—who wore a plush octopus on his head—still managed to stand out. The artist was stationed at the entrance of the event and readily snapped photos with guests. Beside the photo area, a blank wall served as a birthday card for the museum, and guests were encouraged to leave written messages before heading upstairs to check out the exhibition.

At the welcome reception, red sculptures of the number 50 served as celebratory decor, and appetizers and drinks paid homage to the exhibition. One octopus-inspired station, staffed by chefs from Limelight Catering, was dubbed "The Octopus Ate His Own Arm Onigiri Station." The chefs dished out sticky black rice with charred octopus, and guests could top the dishes with ginger-scallion dipping sauce, toasted sesame seeds, and spicy aioli.

When the dinner chimes sounded, partygoers headed toward more octopus imagery in a Partytime-HDO tent behind the museum. Bill Heffernan of HMR Designs collaborated with Murakami on custom decor for the evening. Heffernan had been wanting to experiment with "huge, printed cylinders," he said, and he saw a fit when the museum's anniversary event arose. With low 10-foot-tall and 24-foot-wide light fixtures printed with custom Murakami graphics hanging over the dinner tent, the atmosphere was akin to "a party underneath and inside a Murakami painting," Heffernan said.

Working with the artist and a museum curator, the HMR team selected new works to showcase on the eye-catching light fixtures. "The concept was always that the exteriors would all be one design concept repeated, and the insides would each be individual and unique works of art," Heffernan explained. "Through a back-and-forth collaboration of art selection and editing, we chose the interior artworks, and Murakami custom designed the exteriors of the cylinders. We then proceeded to work together to scale all the paintings to fit the cylindrical application." It wasn't only the light fixtures that nodded to Murakami's work: bright centerpieces made out of ping-pong balls, arranged in tentacle-like shapes, also channeled the bright aesthetic of his work.

During dinner, the museum reminded guests of its milestone anniversary with a commemorative video that began the evening's program; dessert was miniature birthday cakes that partygoers could decorate themselves. Afterward, the tent transformed into a concert venue.

The evening's musical curator Pharrell Williams—who has collaborated on an art piece with Murakami—introduced performer Janelle Monae via video. As Monae sang, servers passed Japanese-inspired treats including mini bubble teas and sweet shaved ices; the cotton-candy-champagne cocktail provided yet another excuse to toast the museum's birthday. Plus, there was one more cause for celebration: The evening raked in $3 million. 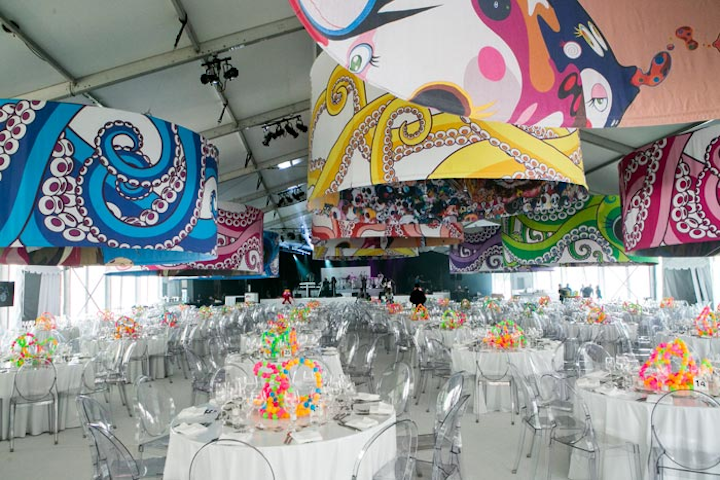 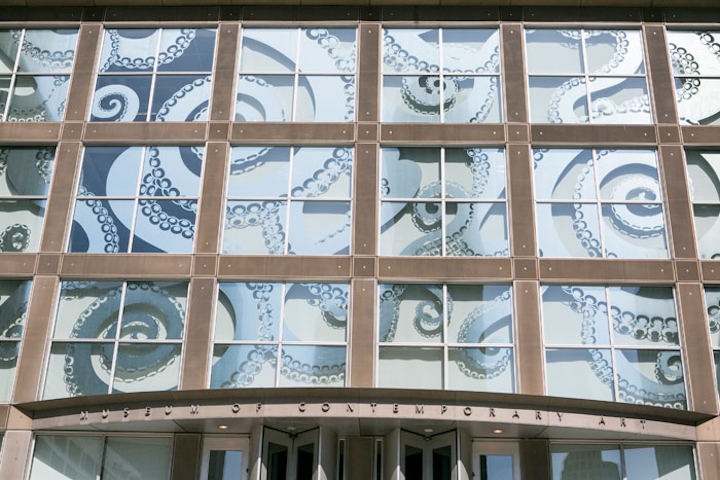 A visual tied to the exhibit "Takashi Murakami: The Octopus Eats Its Own Leg" decks the entrance of the Museum of Contemporary Art. The exhibition opened in Chicago on June 6 and will run through September 24.
Photo: Braxton Black for Jeremy Lawson Photography 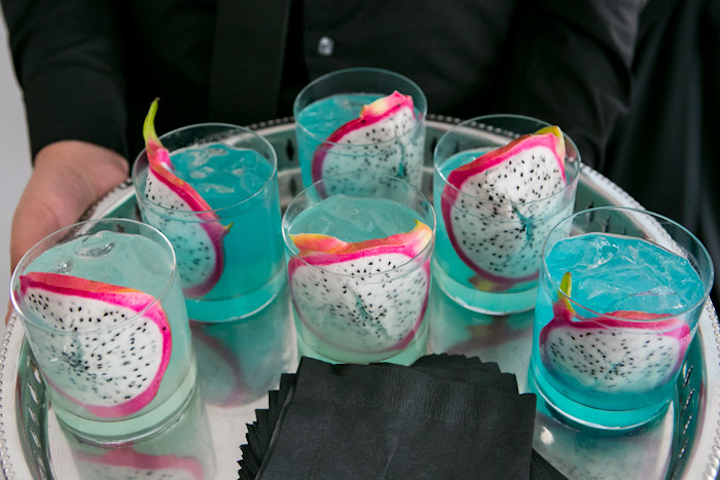 Limelight's colorful, anime-inspired welcome cocktail was called "Viridescent Beast." It was made with sugarcane cachaca and a float of curacao. The bright cocktails were garnished with dragon fruit.
Photo: Braxton Black for Jeremy Lawson Photography 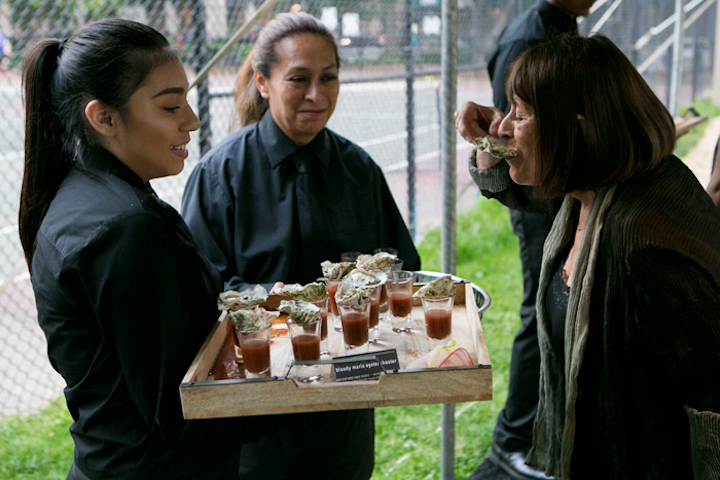 During the cocktail reception, guests checked out the exhibition and interacted with the artist before heading to the dining tent. On the walk from the museum to the tent, they could sample snacks including "traveling oyster shooters"—oysters paired with tequila-based Bloody Mary shots.
Photo: Braxton Black for Jeremy Lawson Photography 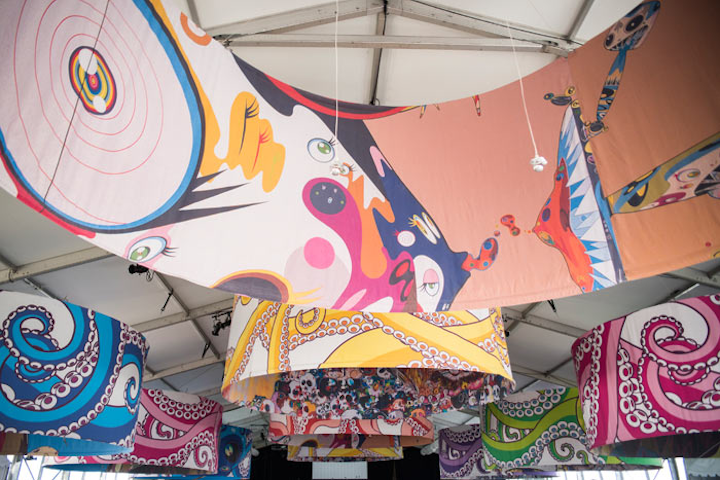 Each of the 12 low-hanging cylinders had a unique graphic inside.
Photo: Mysi Anne Grubbe for Jeremy Lawson Photography 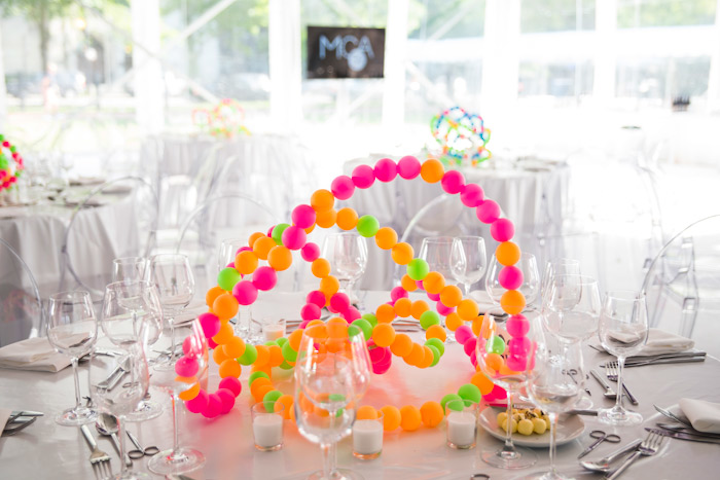 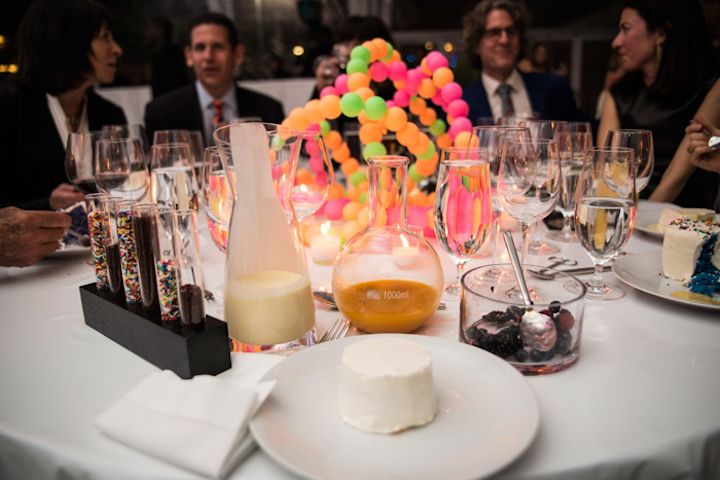 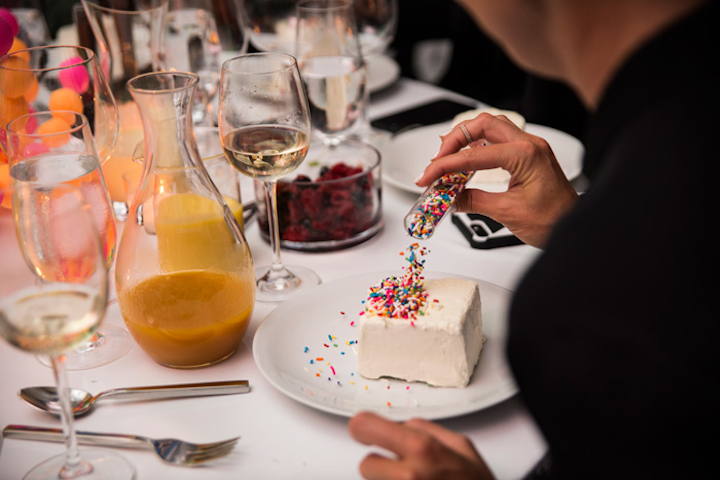 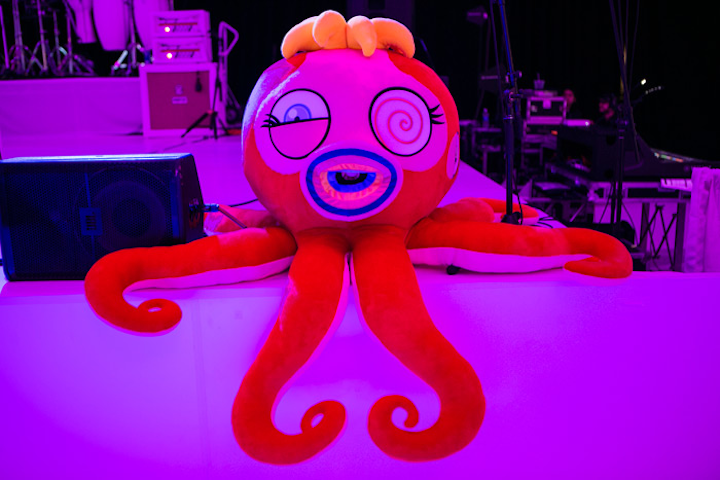 After dinner, the tent transformed into a concert venue—but didn't lose the octopus-inspired thread. As Janelle Monae performed, a plush sea creature decked the side of the stage. The after-party had its own menu, which included a cotton-candy-champagne cocktail, shaved ice, and miniature bubble teas. Event Creative handled lighting.
Photo: Braxton Black for Jeremy Lawson Photography
More in Chicago 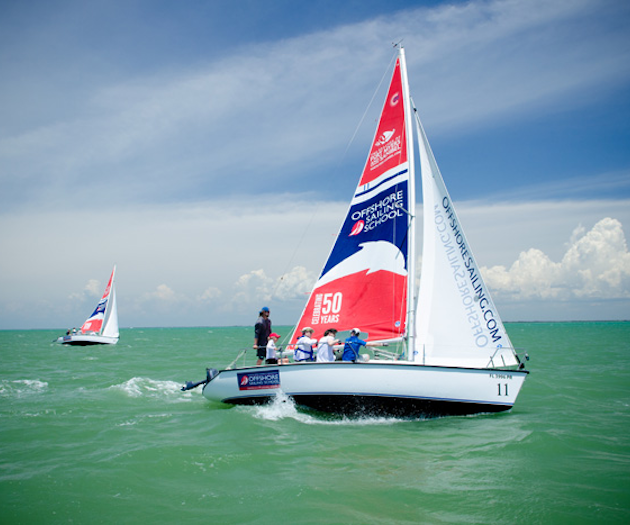 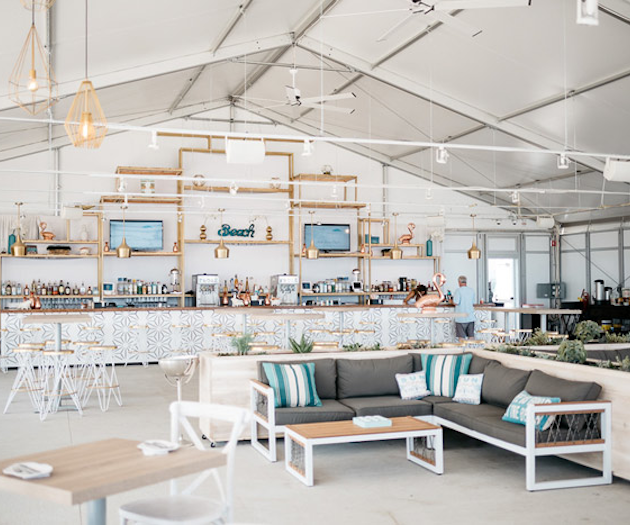