On Saturday, the Make-a-Wish Foundation of Southern Florida and the InterContinental Hotel Miami celebrated the 16th anniversary of its annual fund-raiser with an Asian-inspired theme. Javier Velarde of Triton Productions, who produced the event twice before, in 2006 and 2007, separated the hotel’s mezzanine into multiple spaces using floor-to-ceiling red and orange draping. He used geishas, samurai swordsmen, live taiko drummers, sushi bars, a ribbon dancer, an artificial cherry-blossom tree, and a Chinese dragon to convey the “Zen and the Art of a Wish” theme.

“People come here to be seen, but they also come here to see what we’re going to do, so we try to challenge ourselves every year,” said Robert Hill, gala host and general manager of the InterContinental Miami. “This year, we took the traditions of the Orient to be the symbols of hope, strength, and joy, which are such an important part of a [child’s] wish. We tried to touch on all of the senses with what we created and keep the energy level high.”

The event, known to kick off the social season, raised about $900,000 and attracted 850 guests—50 more than last year. It also drew more sponsors: 79, up from 33 in 2009. “This year we challenged the board of directors and the committee members to identify some new people they would reach out to and get them to engage and commit,” Hill said. “And the sponsors that have been with us over the years have come up even bigger this year.” Sponsorship opportunities ranged from a $500 individually priced ticket to $20,000 premium tables. Philanthropists Al and Nancy Malnik, Trafalgar Capital Advisors, American Airlines, Southern Wine & Spirits of America, and Carnival Cruise Lines were among the key sponsors.

As in the past, there were both silent and live auction components. This year, Paula Abdul served as the celebrity M.C. of the live auction (past auctioneers include Pamela Anderson, Sharon Stone, and Kim Kardashian). A 2011 Ferrari 458 Italia from recurrent sponsor the Collection, a walk-on role on an upcoming Ben Stiller movie, and an all-inclusive trip for two to Asia valued at $60,000, courtesy of Strategic Hotels & Resorts, were among the top items up for bid during the live auction, which followed a dinner prepared by the hotel’s executive chef, Alexander Feher. An act singing songs from Broadway musical Jersey Boys was the night’s featured entertainment.

For the third year in a row, the organizers added an after-party to the evening. In the past, this was held in the same ballroom as the dinner and live auction. This year, the organizers chose a separate space—the mezzanine used during the cocktail reception. Velarde toned down the lighting, added a DJ platform, and recruited Harajuku dancers to reinvent the mezzanine into a nightclub experience called “Enter the Dragon.” He also staged a runway for designer Nicole Miller, who presented a retrospective fashion show.

Some 500 guests—a combination of dinner guests and people who bought separate tickets—attended the after-party from around midnight until 3 a.m. “The nightclub has been instrumental in raising awareness of the ball and its mission to an entirely new group—a generation we hope will one day be our new lifetime benefactors and ultimately continue the power of the wish,” said gala chairman Shareef Malnik, proprietor of the Forge restaurant. 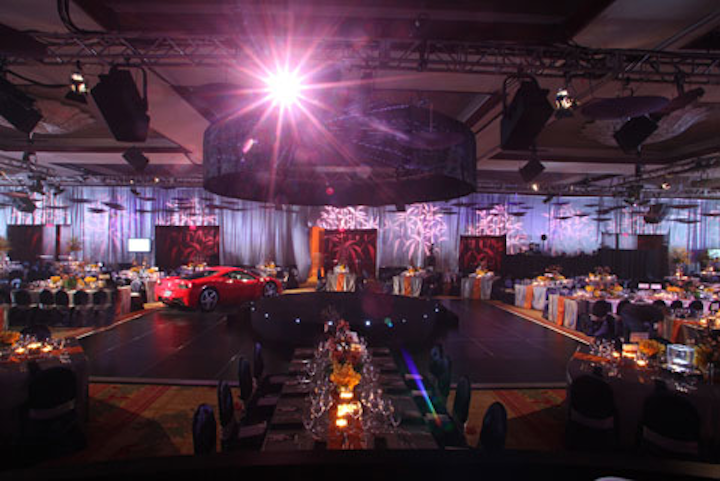 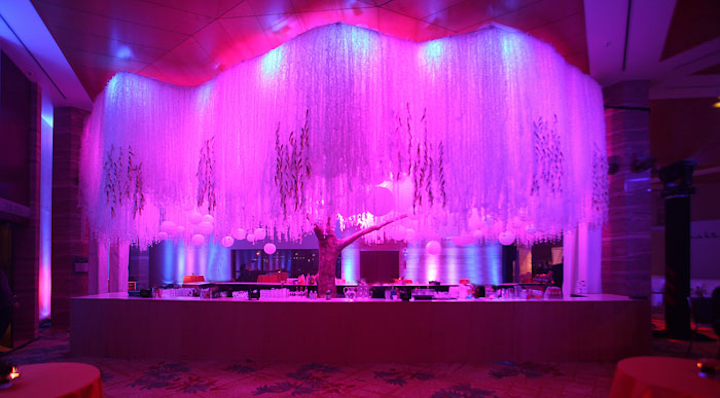 A giant, artificial cherry-blossom tree with changing LED lights stood above the main bar in the mezzanine and served as the centerpiece of the room.
Photo: Robin Hill 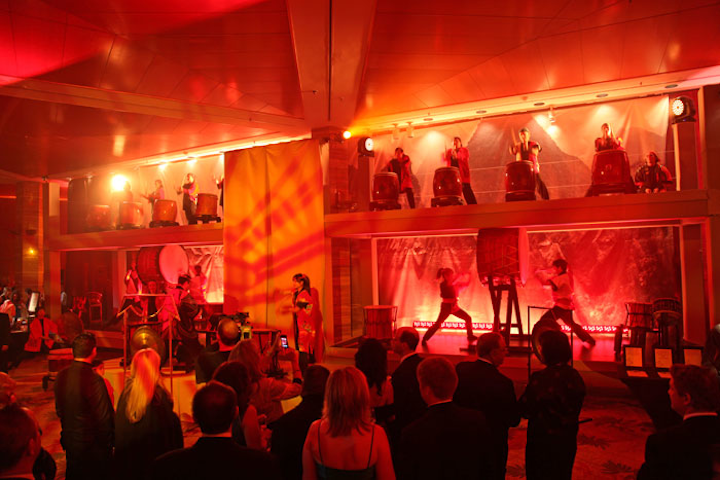 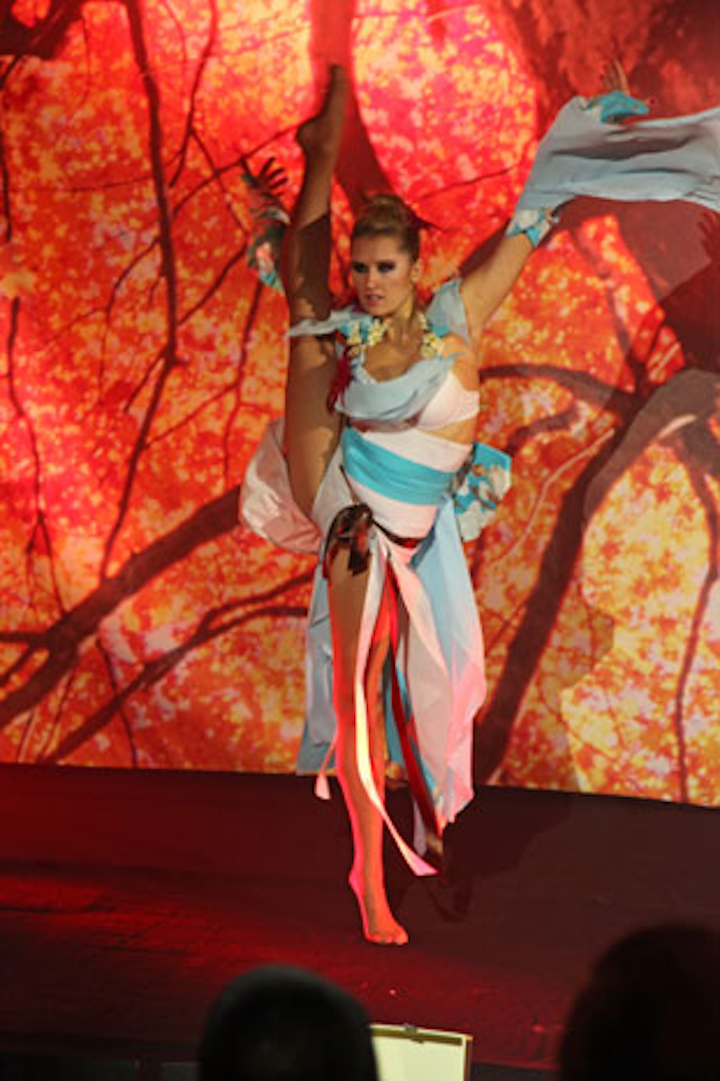 A ribbon dancer performed in a separate part of the mezzanine.
Photo: Robin Hill 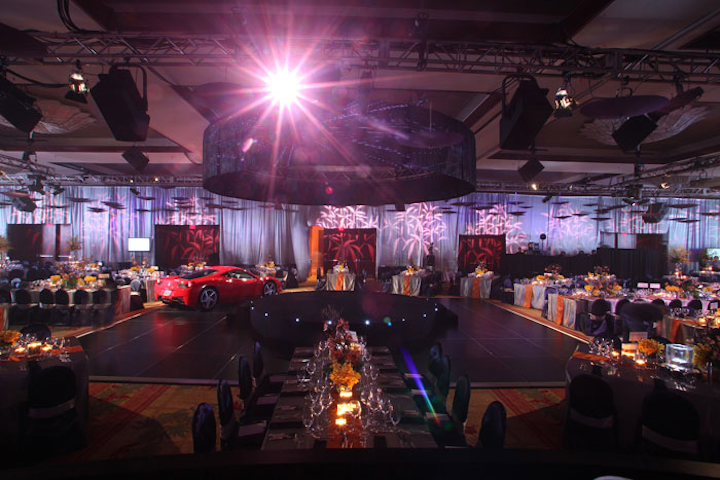 In contrast to the bright red and orange used on the mezzanine to symbolize ancient tradition, the motif for the ballroom was a modern city like Tokyo. Producer Javier Velarde used gobos, hanging umbrellas, and a palette of primarily blue, silver, and orange.
Photo: Robin Hill 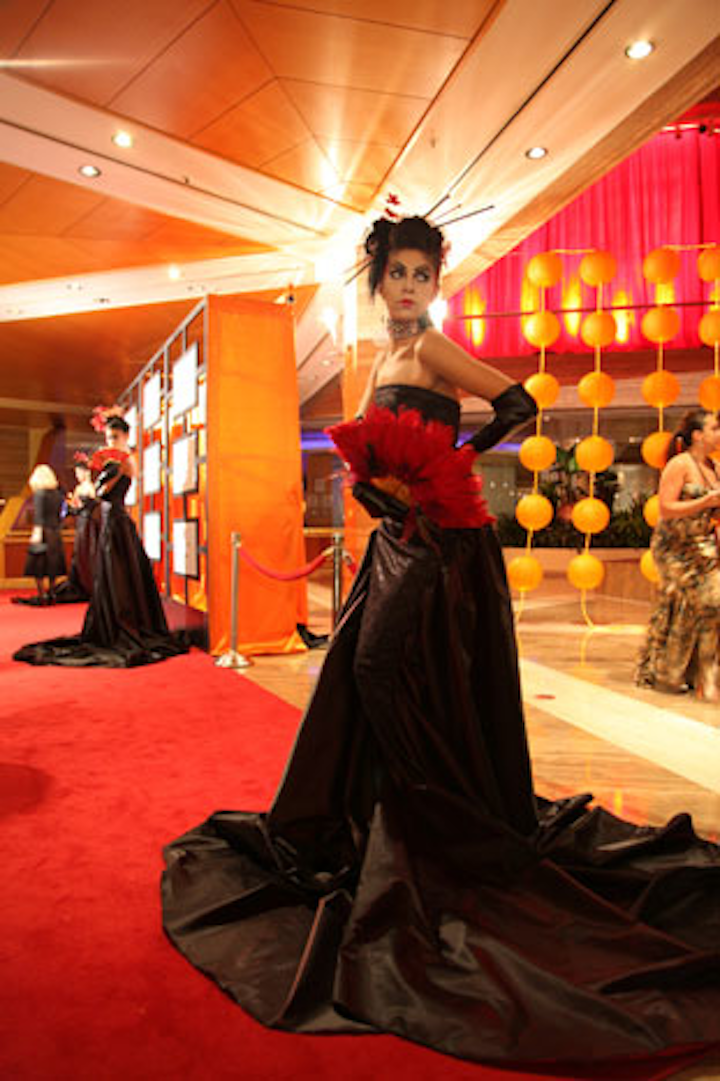