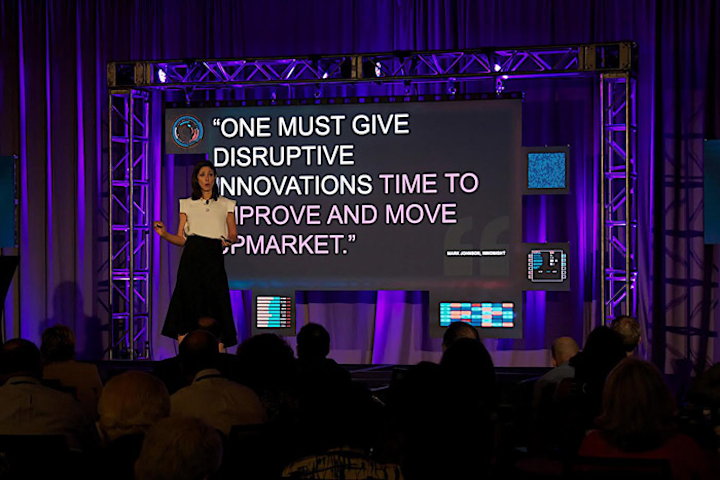 Saravay notes that speakers should always opt for a dark background with light letters for screen presentations, like this one from DigitalNow in 2015.
Photo: Courtesy of Fusion Productions

The Event Leadership Institute kicked off its series of interactive Learning Labs on Technical Meeting & Event Production on July 27 with a hands-on course led by Matthew Saravay, president of New York-based production studio Wizard Studios. Course participants learned about projection technology, the types of different microphones and lighting and when to use them, the logistics of staging, and more.

Here are some useful tips that Saravay had for planners and production managers.

2. Equip speakers with an appropriate microphone.
Saravay noted that giving speakers an appropriate mic is key for the most effective sound, as microphones pick up signals in different ways and signal flow is key. Lavaliers are popular, because they're small and don't have to be held, and can easily attach to clothing around the chest area such as a tie. For instances where one is wearing a top that won't suit a lavalier, Saravay said it's best to suggest a handheld mic.

4. Ask clients what their needs are so the right type of stage can be selected.
Saravay noted that planners should always ask clients questions about the logistics of staging, including whether there is a band, if there's a drummer, and the number of people who will be on the stage. He also says that for talent and V.I.P.s, there should be green rooms that have a clear path to and from the stage. The sequestered space should have a separate entrance and exit to the venue.

5. Use teleprompters effectively.
"When to use a teleprompter is up to your client and what your specific needs are," said Saravay. "It's better than a written script." He explained that they should be used in a way where the speaker can have a conversation and look at the audience as they're delivering their message. "You always want people to rehearse because of pacing," he said. "You want to make sure the rhythm is in sync, so words are going at a pace that sounds natural."

7. Create a show flow.
"Think about a show flow and how to integrate service," said Saravay, who mentioned that planners should figure in breaks for wine and clearing tables so that it's not out of place or awkward during an event.

8. Be strategic when selecting a venue.
"If I've never been to a venue, I will always give clients a preliminary quote," he said. When it comes to venue and site selection, he noted some of the most important things to check for are the availability of power, rigging points, and Internet access.

Learning Labs will continue on August 2 in Chicago led by Brandt Krueger at Event Creative; on August 4 in Washington led by Ajay Patil and Blayne Candy of Showcall; and on August 16 and 17 in Edmonton, Alberta, led by Brent Taylor of Event Technology Solutions.

Disclosure: BizBash is an investor in the Event Leadership Institute.