BiZBash Trade Show: Bigger Than Ever

This year's BiZBash Event Style Show—our fourth annual trade show—was bigger and better than ever…if we do say so ourselves. (Forgive us for the blatant self-promotion.) Moving to Pier 94 this year, the two-day event brought together a record crowd of 2,750 attendees in a larger space filled with even more resources, ideas, and events targeted at all kinds of event and meeting planners.

On the show floor, more than 200 exhibitors showed off their latest products and services. Meanwhile, on the main stage sponsored by Wizard Studios, entertainers from Michael Bongar Entertainment, Screaming Queens, Divalicious, and others kept the atmosphere fun and energetic.

At the front of the hall, The Catering Company served hot lunch items, snacks, and coffee at a café area adjacent to a lounge designed by David Beahm, the show's executive event designer. Beahm gave the show's entrance, lounge, event space, and education areas a modern, yet comfortable vibe. A black curtain with large leaf-shaped cutouts lit by color-changing lights gave the event space—where general sessions and luncheons were held—an autumnal look. And an enormous arrangement of flowers from the Flower Council of Holland marked the entrance of the show, where a wavy registration desk was manned by E-vents Registration.

Attendees who registered for the "BiZBash U" education sessions walked through fabric sculptures from Pink Inc. to attend two days of panel discussions with industry leaders to learn skills to grow their businesses and improve their work. To offer classes of interest to everyone in the industry, there were three different course tracks: The "Best Practices for Independent Planning Companies" sessions included an etiquette seminar, a technology primer, and a session about branding and design. The "Discovering Your Event Style" track included panels of top caterers, designers, and audiovisual production heads, and a presentation about trends in event style led by BiZBash editor in chief Chad Kaydo. And the "Behind the Scenes" sessions were led by the teams behind some of the city's biggest events, including the New York International Auto Show, the Tribeca Film Festival, and the Metropolitan Museum of Art's Costume Institute benefit.

Kwame Jackson from The Apprentice was the keynote speaker at Thursday's general session, entitled "The Art of Hiring a Great Speaker for Your Next Event." Jackson gave 10 secrets to success to a packed room; the speech was followed by a discussion moderated by BiZBash president Richard Aaron with Joel Gheesling of Keppler Associates (Jackson's speaker representation) and Shane York of Richmond Events on the best practices for hiring the right speaker for your event.

The general session on Friday gathered a diverse panel of speakers for "Meet the Press: Making a Big Splash With Your Events," moderated by BiZBash founder and C.E.O. David Adler. Lloyd Grove of The New York Daily News, Stephen Silverman of People.com, Marie Hickey of Extra, Mick Magsino of Getty Images, and Amanda Gordon of The New York Sun spoke about what draws journalists to events. (Surprise! It's not always celebrities.) Publicists Elizabeth Harrison of Harrison & Shriftman and Lori Rosen of the Rosen Group talked about publicity tactics they use to lure press to events. Bill Murray of Celebrity Service spoke about how his service can be used to get celebrities to events, and Amy Newman Kaplan of Maxim spoke about tactics she's used at her events to lure publicity, press, and celebrities.

The show also inaugurated the concept of the New York Museum of Special Events & Hospitality, which will showcase the best of the special event, business entertaining, meeting, and trade show industries. The mini-museum, led by Jean McFaddin of McFaddin Associates and Jeremy Kaplan and designed by Deb Cohen of Creative Concepts, Karin Bacon of Karin Bacon Events, Deb Roth of Pink Inc., and David Osterlund of Legacy Television, showcased a sample of what the museum will display, including costumes, props, photographs, guest lists, seating plans, table decor, and more artifacts from actual past events.

Abigail Kirsch catered the by-invitation-only Tastemakers Luncheon on Thursday afternoon, serving corporate event planner guests a Mediterranean tapas menu in the event space, which was designed by Beahm. Vocal group Toxic Audio provided entertainment at the beginning of the meal. The lunch was hosted by Aaron and Kaydo, who moderated the discussion portion of the event with a panel of industry professionals—Janet Cohen, the director of conference and banquet services for UJA-Federation of New York; Joan Horton, vice president of corporate events at Revlon; Brenda Major, vice president of conference planning and special events at ABC; Candida Romanelli, show director of the New York International Auto Show; and Peter Rosenberger, director of special events marketing at ESPN. Guests responded to industry-related questions with Machine Dreams' "Communicator" audience response system.

Performances by Broadway spoof act Forbidden
Broadway and comedian Corey Kahaney preceded this year's Hall of Fame ceremony. Aaron and Adler inducted the new honorees: Ed Kane, the director of catering for the Sheraton Hotels of New York; Peter and Penny Glazier of the Glazier Group; Tom Finn of Tom Finn Productions; Edna Greenbaum from the Council of Protocol Executives; Preston Robert Tisch from the Loews Corporation; Peter Kohlmann from the New York Host Committee for the Republican National Convention; Barbara Tober, chairman of the Museum of Arts and Design; Jack Morton Worldwide; the Actors' Fund of America; and Radio City Music Hall (which sent a couple of Rockettes to pick up the award). The Catering Company served hors d'oeuvres at cocktail receptions for the honorees and attendees before the ceremony, and a performance by the Smithereens ended the day.

A luncheon for independent planners catered by Great
Performances was held on Friday in the event space. Sponsored by American Express, the event brought together professionals from event and meeting planning firms, event marketing agencies, and PR firms. Aaron and Carol Krugman, president of Krugman Group International and dean of the Meeting Professionals International Institute, spoke at the event, which included entertainment by the USO Troop of Metropolitan New York. 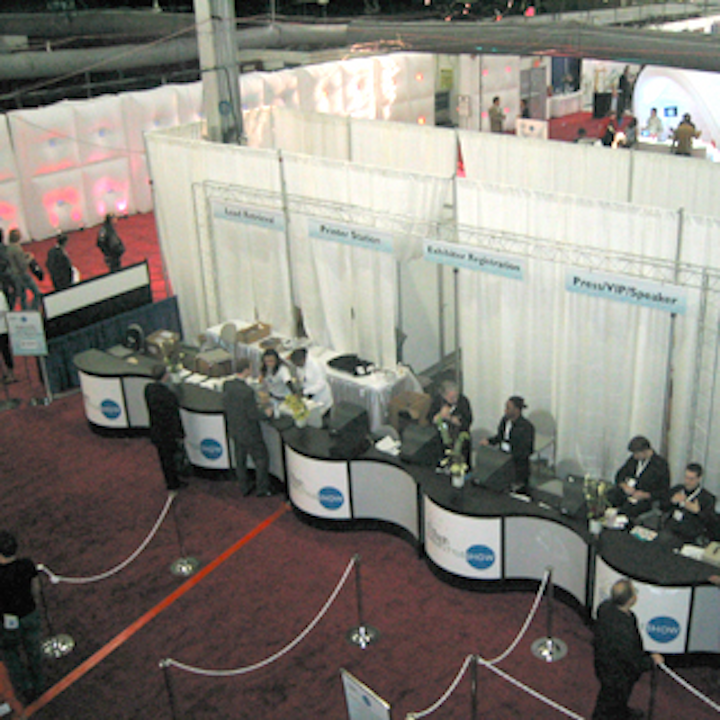 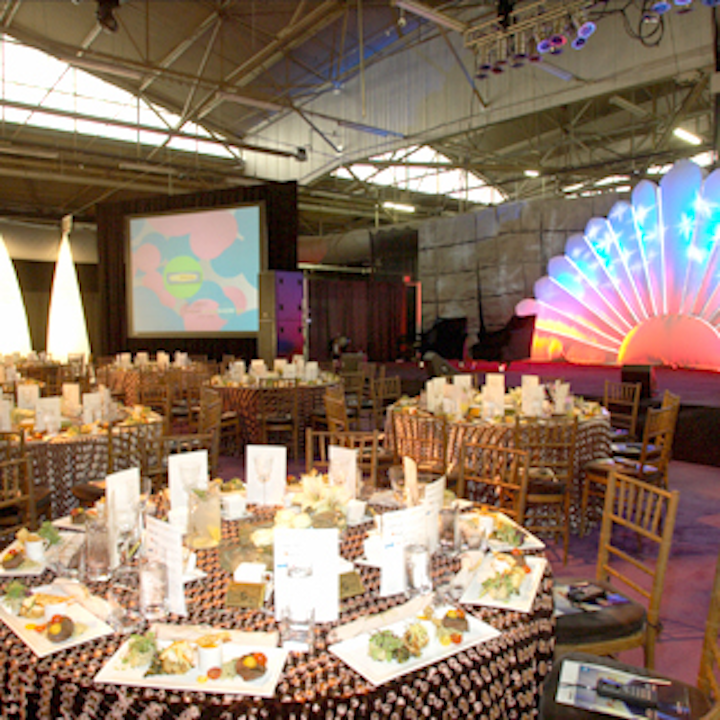 The event space was set for a luncheon for independent planners sponsored by American Express and catered by Great Performances. (Photo courtesy of Fifth Avenue Digital.) 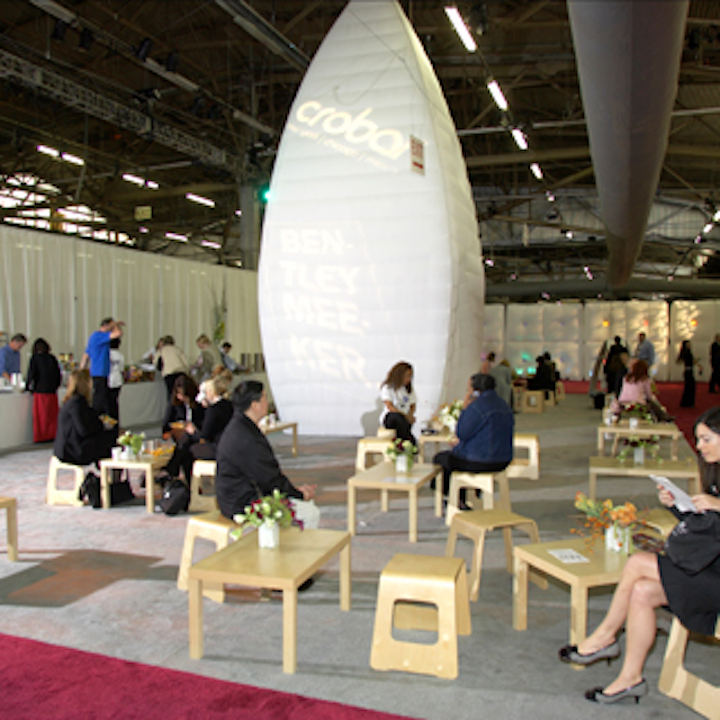 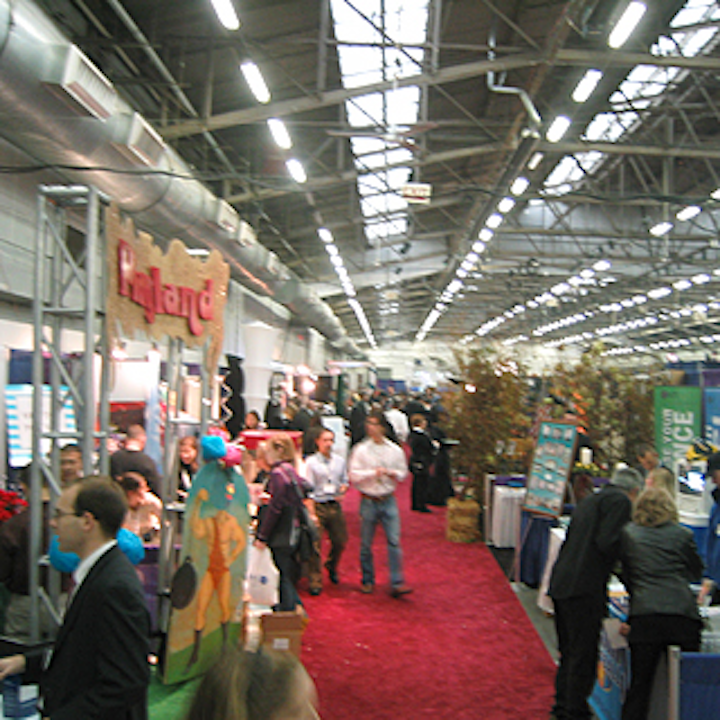