Last year Bravo Media dubbed its upfront "Breakthrough With Bravo" and sought to illustrate that sentiment with an unconventional presentation that saw three simultaneous events in New York, Chicago, and Los Angeles, as well as the integration of a Watch What Happens Live telecast. This year, the affair was no less ambitious, highlighting the brand's new digital focus with a "Powered by Bravo" tagline and various technological elements.

Held last Wednesday, April 4, at Center548, the event was produced by Empire Entertainment, the same company the NBC Universal property tapped for its 2010 and 2011 upfronts. The outing also had Andy Cohen, the cable network's executive vice president of original programming and development, host a special Watch What Happens Live All-Star Party show, which aired later that night.

Starting with the way guests entered the gathering, Bravo looked to emphasize its commitment to multimedia platforms. It also focused on the other five areas of the brand: food, fashion, beauty, design, and pop culture. The elevator, which took attendees from the ground-floor entrance to the third-floor reception, was embellished with a neon chandelier and LED lighting effects, and included a voice-of-God welcome message from Bravo's on-air announcer, Rick Gomez.

In the main space, more lighting, sound effects, and other visual components pointed to the motif. Each of what the network calls its "passion points" was designated a specific color, which was then used to mark decorative elements like individual lounge areas. For instance, orange highlighted Bravo's culinary shows and talent, the hue accenting the carpet, lampshade, and pillows of one lounge as well as the night's buffet stations. The color-coded design even extended to the oversize portraits that covered one wall, with stars like beauty personality Tabatha Coffey in blue, fashion stylist Rachel Zoe in purple, and chef Roblé Ali in orange.

A separate section of the reception space showcased the brand's digital efforts. Dubbed "Digital World," the area was dominated by an eye-catching mosaic of electronic products—TV screens, laptops, iPhones, and iPads—that displayed content from the Bravo Web series Last Chance Kitchen, as well as sneak peeks at new offerings like the Connected TV app and social media initiative "The Real Housewives: The Game." There was also a cell phone charging station and a station that printed Instagram photos that were posted with the hashtag #PoweredbyBravo.

However, the most visually oriented detail of the event was the three-dimensional backdrop for the short presentation. Speech-bubble-shaped pieces in different sizes peppered the all-white structure, which functioned as a projection surface. Working with French digital animation company Super Bien, Bravo mapped video projections onto the shapes and synced the graphics with music, creating a striking cinematic effect that preceded remarks from the network's president, Frances Berwick, and vice president of ad sales, Barbara Bekkeddahl.

Following the presentation, guests headed to the second floor, where the stage was set for the taping of Cohen's Watch What Happens Live All-Star Party. Banquet-style seating in the front held stars from Bravo series, some of which joined the host onstage, while a smattering of highboys and cocktail stools at the rear gave the more restless attendees room to move around. 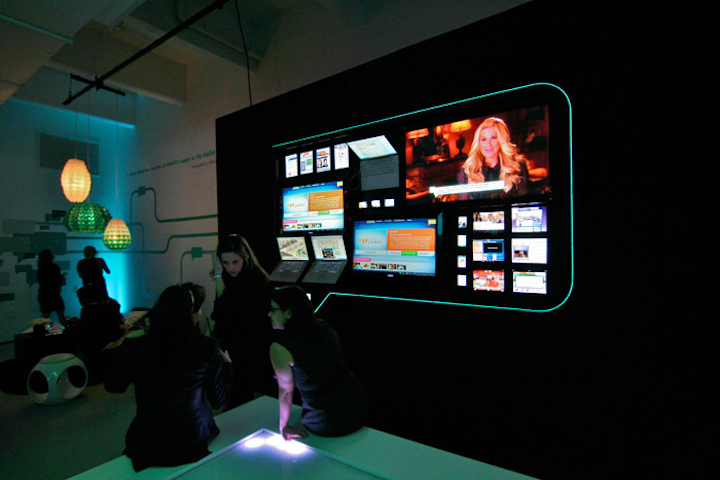 The centerpiece of the digital section was a mosaic of computers, TV screens, iPhones, and iPads that was mounted to a wall and highlighted with a speech-bubble-shaped illuminated frame.
Photo: Courtesy of MB Productions 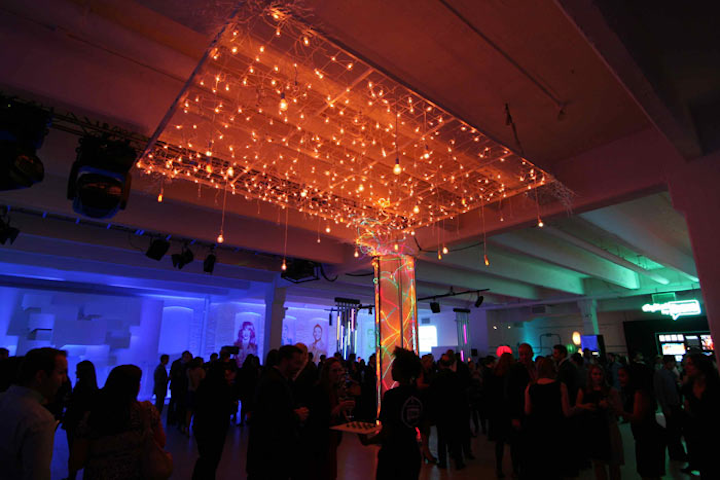 Bravo Media took over two floors of west Chelsea event space Center548 for its upfront event on April 4. In addition to decorating the elevator with LEDs, the television network used colors and lighting elements to highlight its five "passion points" as well as the night's "Powered by Bravo" tagline. A canopy of light bulbs decorated the ceiling at the entrance to the reception space.
Photo: Courtesy of MB Productions 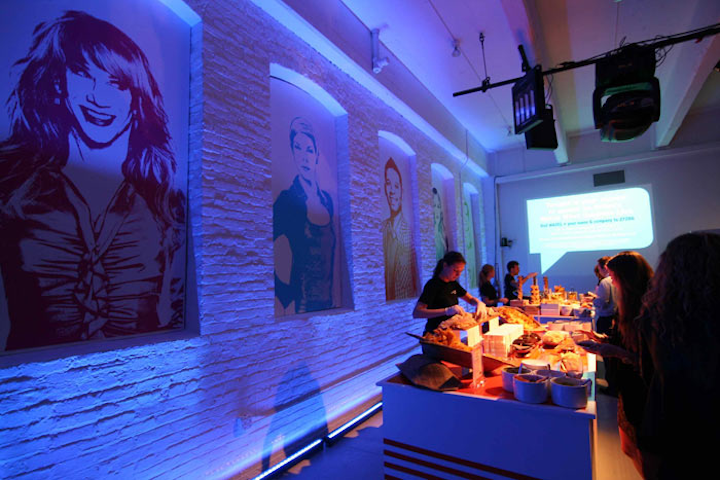 The five-color design scheme was employed in a number of decorative elements, including lounge vignettes and oversize portraits. The latter had the likeness of show stars painted in the monochromatic hues of their division, including beauty personality Tabatha Coffey in blue, fashion stylist Rachel Zoe in purple, and chef Roblé Ali in orange.
Photo: Courtesy of MB Productions 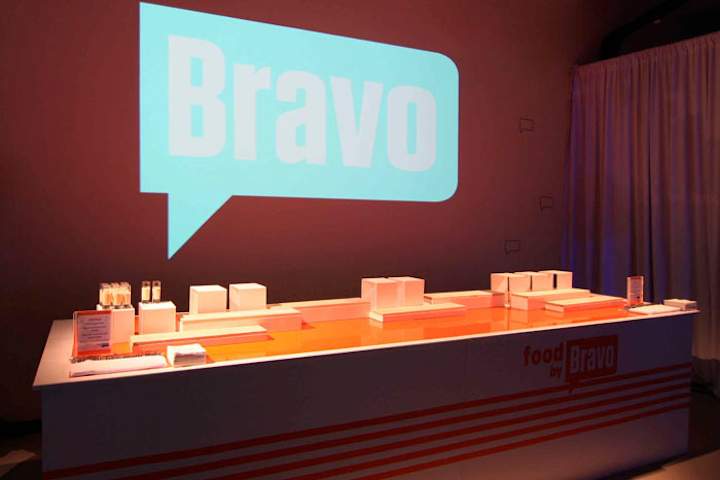 The food pillar was represented with orange-colored accents, which marked the buffet stations set up around the space.
Photo: Courtesy of MB Productions 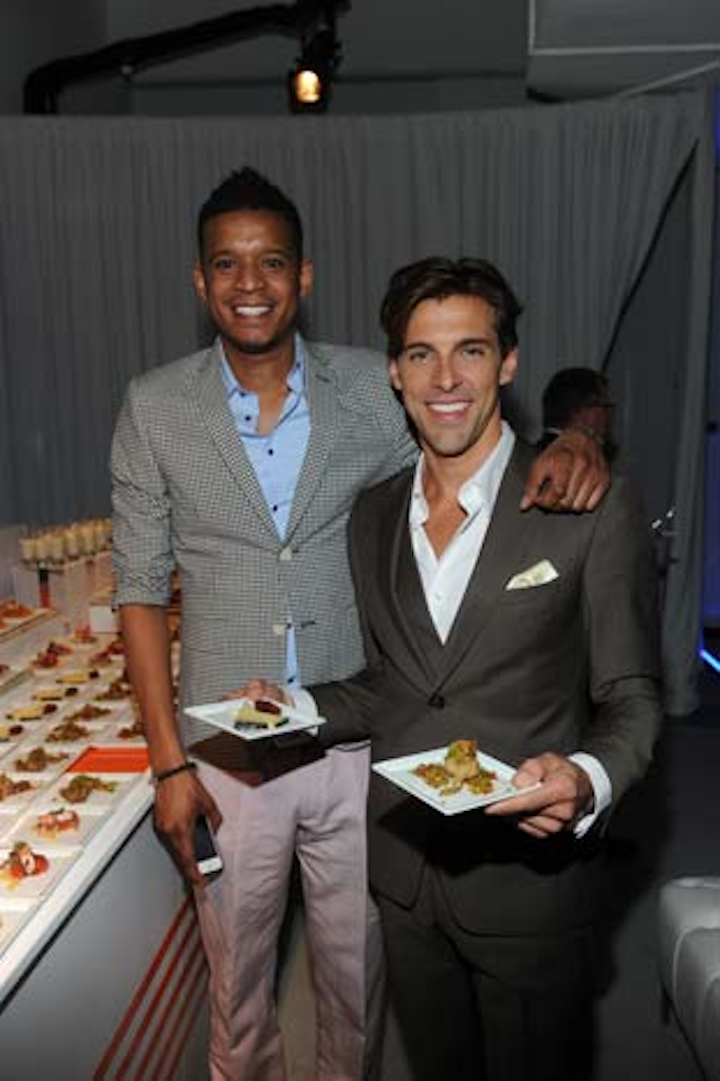 To craft the menu for the event, caterer Creative Edge collaborated with chef Roblé Ali (pictured, left) of Bravo series Chef Roblé & Co., working with the culinary personality in its kitchens and using his recipes for the spread.
Photo: Jamie McCarthy/Bravo 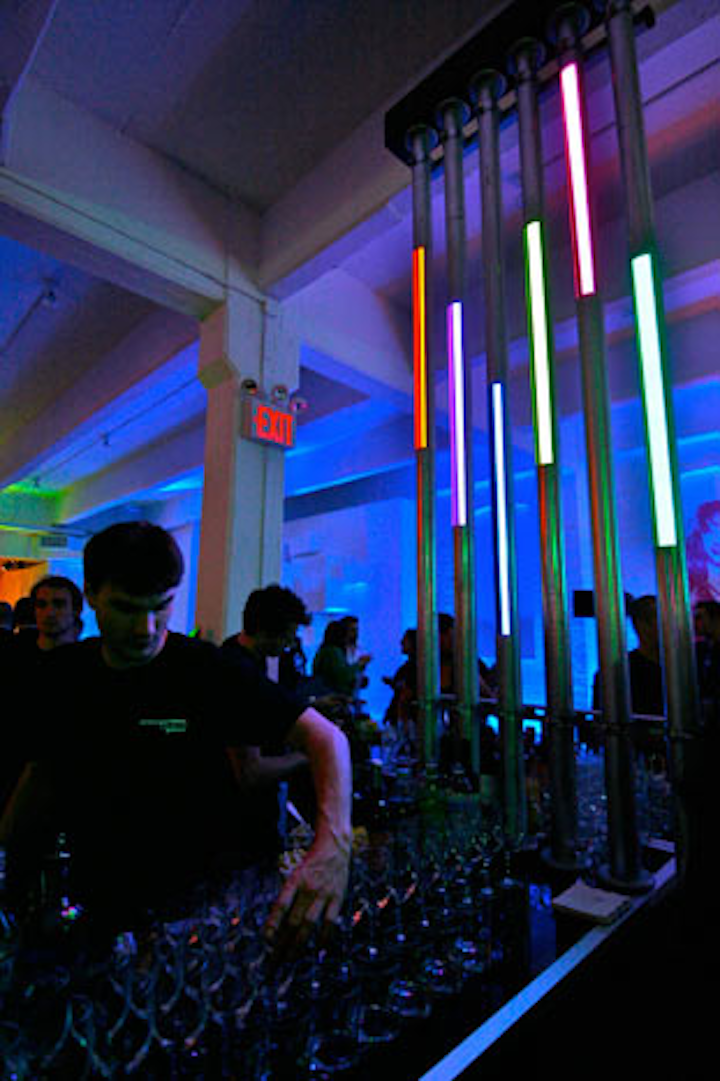 The production team also used LED lights embedded in conduit pipes to bring the five colors into the design of the event.
Photo: Courtesy of MB Productions 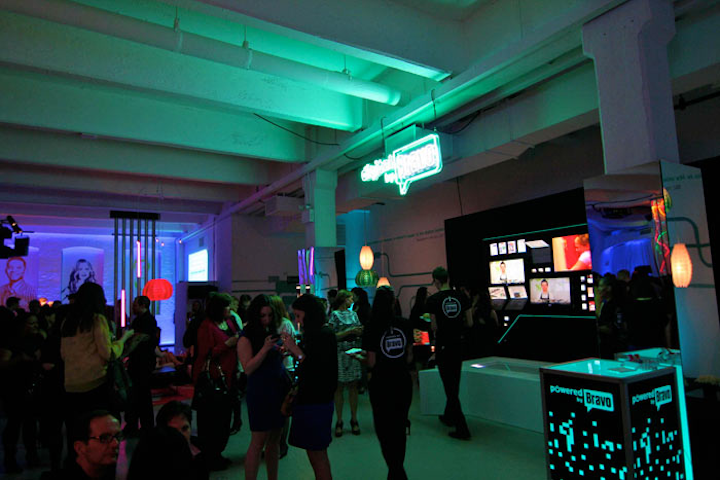 To really reinforce the importance of digital to its brand, Bravo carved out a large section of the venue and created what it called "Digital World." The space included a charging station and machines that printed out images posted to Instagram.
Photo: Courtesy of MB Productions 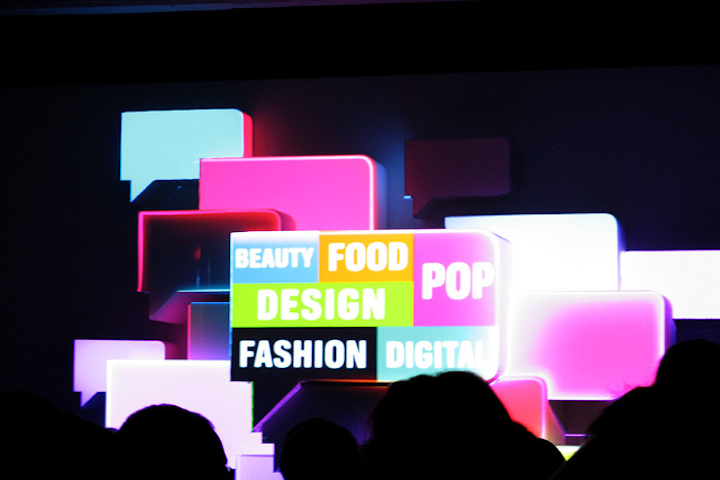 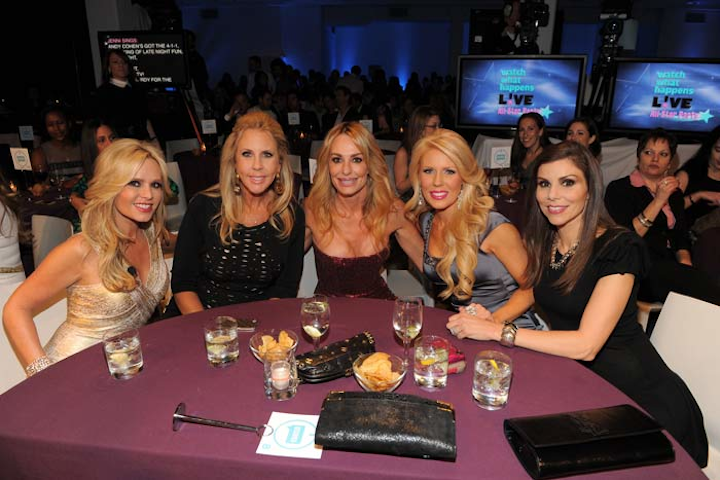 Following the presentation, guests headed to the second floor for the taping of Watch What Happens Live All-Star Party, hosted by Bravo exec Andy Cohen. This portion of the event held banquet tables and chairs for guests in the front and highboys and cocktail stools for those in the rear.
Photo: Larry Busacca/Bravo 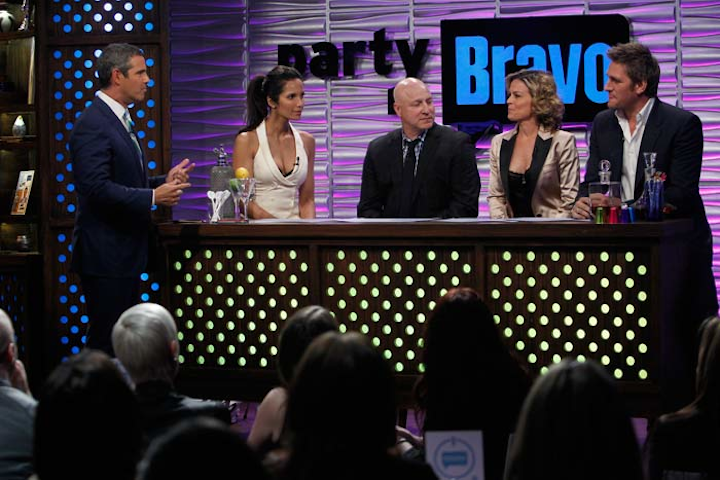 Similar to last year, Bravo brought incorporated a special version of Cohen's show into its upfront event, providing attendees (and later, consumers at home) with a look into the network's upcoming season. On stage, Cohen (pictured, far left) interviewed more than 35 personalities, including Top Chef's Padma Lakshmi and Tom Colicchio, as well as Cat Cora and Curtis Stone, the hosts of new series Around the World in 80 Plates.
Photo: Peter Kramer/Bravo
More in Audiovisual