Charity: Water, a nonprofit organization that provides drinking water to people in developing nations, has a reputation for using technology to build an emotional connection between donors and beneficiaries.

At past galas in New York, guests experienced activations like a virtual-reality film depicting a girl drinking clean water for the first time, plus a video-matching program that connected eventgoers with similar people in a village without clean water. (For example, an American couple married for 20 years would be “matched” via iPad with an Ethiopian couple married for 20 years).

But for its first West Coast gala on December 1, dubbed Charity: Ball and held at the Armory in San Francisco, the nonprofit upped the tech ante by surrounding the evening's 522 dinner guests with a 40,000-pound, 360-degree video experience, plus a custom app and personalized iPads that allowed for easy, real-time donations. The moving video, produced by Canadian director Drew Lightfoot and Bodega Studios, documented an Ethiopian woman’s daily trek for water.

“We crafted the imagery of a woman’s quest for drinking water into an impactful story that inspired guests to donate $7 million in support of clean water for over 100,000 people in Ethiopia and beyond," explained Elle Chan, co-founder and executive producer of Trademark Event Production, the San Francisco-based firm that produced the gala. (Trademark was founded by Chan and Jon Forst, alumni of Lucasfilm's visual effects and animation studio.)

Of course, it took quite a bit of innovation—and teamwork—to bring the low-tech villager experience to the high-tech Bay Area.

“We brought together a powerhouse of creative talent from our 20 years in production to conceptualize and deliver an immersive 360 experience unlike any other,” continued Chan, who noted that it took five months of planning to bring the massive "Halo" screen, which was made up of 840 LED tiles, to life. Los Angeles-based Global Trend Productions created custom-fabricated L-brackets to connect the tiles, enabling the structure to encircle gala guests and provide a focal point for the evening. Immersive provided additional audiovisual support.

Another technical highlight of the evening was the custom app from All of it Now. The result of three months of work from creative director Howard Wong and his team, the fund-raising app powered 11 futuristic “giving moments” throughout the event, such as graphics and details about rigs that can dig wells. Every seat at the gala was outfitted with an iPad pre-loaded with the seatholder's information. The iPads were controlled by a bank of laptops, which were networking with 10 on-site servers.

At each of the giving moments, 522 iPads flashed to life, simultaneously prompting attendees to donate. By tapping the screen, donors could pledge money, the totals of which would be displayed in real time with animated graphics on the halo.

Creating the film was no small feat, either. Lightfoot and his team traveled to Ethiopia to document a local woman’s daily journey for water with 360-degree cameras. “I hadn’t seen any of these locations, so I had no idea what my crew and I were going into,” Lightfoot explained. Ultimately, the team had to hike with their equipment to get the footage they needed and find hiding spots behind rocks and trees to avoid spoiling the shots. To complement the walk footage, Lightfoot and Bodega also filmed interviews with Ethiopian women detailing their daily struggles to acquire water.

Over the last 12 years, Charity: Water has worked in 28 countries to bring clean water to 8.5 million people, according to founder Scott Harrison. Click through the slide show to see inside this year's technology-rich benefit, which raised a record-breaking amount of money to continue solving the clean water crisis. 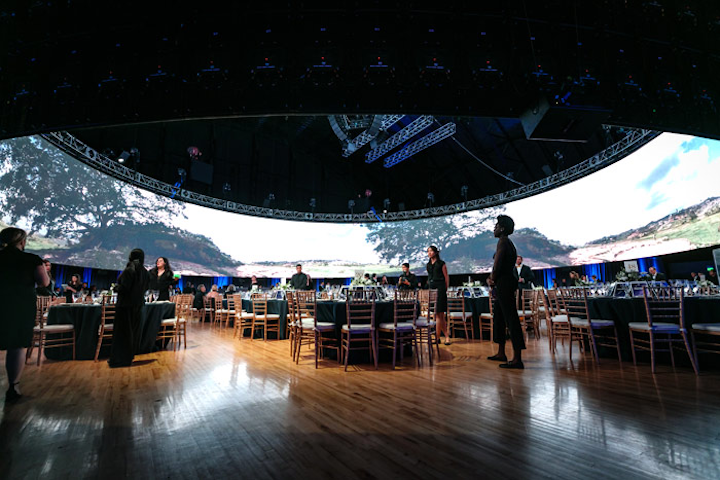 The 40,000-pound "Halo," which was made up of 840 LED tiles, was held up with custom-fabricated L-brackets. An immersive 360-degree video documenting an Ethiopian woman's daily trek for water played throughout the evening.
Photo: Claudine Gossett 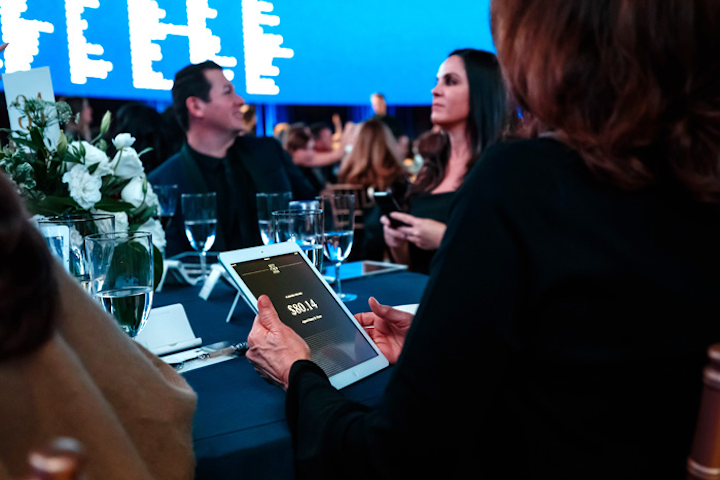 Each of the 522 dinner guests was given an iPad preloaded with their information. Eleven times throughout the evening, the iPads prompted attendees to donate.
Photo: Claudine Gossett 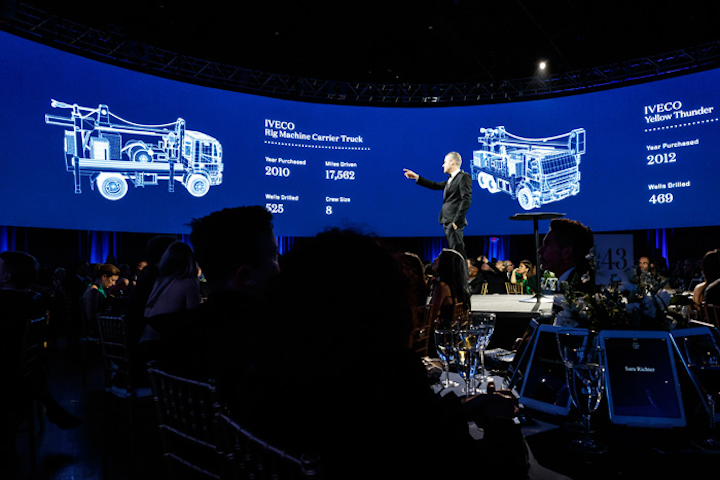 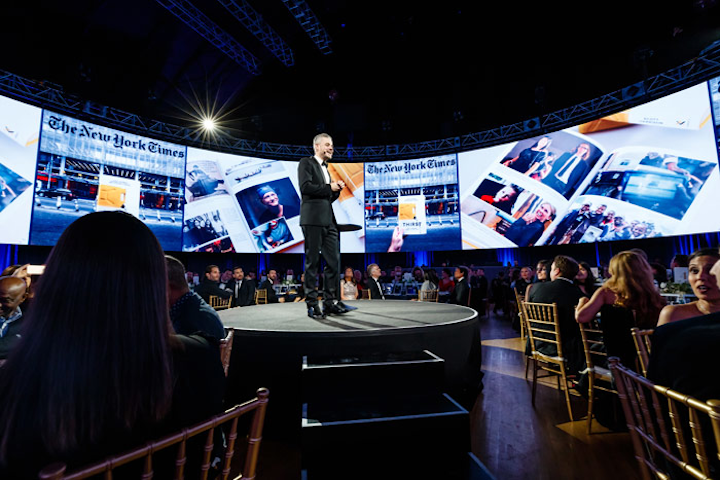 The screen was also used to display informational graphics, as well as the gala's donation totals.
Photo: Claudine Gossett 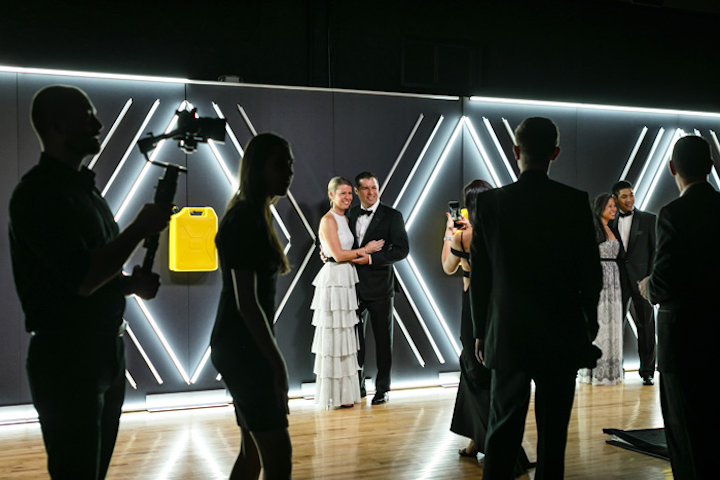 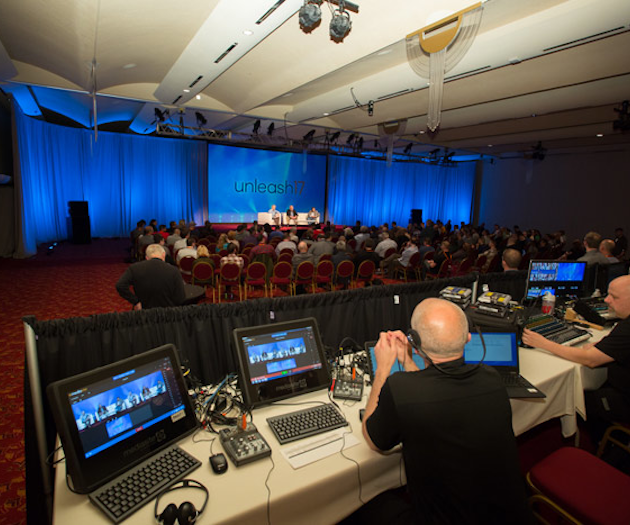