At BizBash Expo: Barton G. Talks About Innovation, Inspiration, and Expanding His Empire 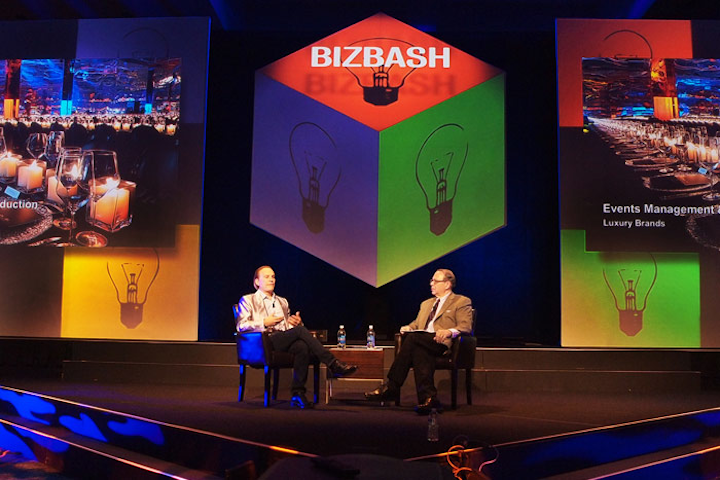 Barton G. Weiss shared how he finds inspiration and creates innovation, from his events business to his hotel and soon-to-launch magazine, at the BizBash Expo & Awards Wednesday.
Photo: Brightroom Inc.

Barton G. Weiss will be the first to tell you he does not know a thing about golf. Yet the founder and C.E.O of his namesake company has worked for the P.G.A. since 1993 and is able to create memorable events because “I know their brand and understand their brand parameters.”

Weiss shared insights from his career—from his start as a professional ice skater to his work in women’s fashion, event production, restaurants, a hotel, and a magazine launching next month—during a conversation with BizBash Media president Richard Aaron during a general session at the BizBash Expo & Awards in Fort Lauderdale on Wednesday. (He also made BizBash's list of the most innovative people in events earlier this year.)

All clients—no matter how corporate or conservative they might seem—love innovation, Weiss said. The trick is to have a clear purpose and tie it back to the brand.

“At the end of the day, no matter what medium I'm working in, it’s about making your client a memorable event or moment that they will remember for years and years to come,” he said. “Nobody needs the same thing every day. Nobody needs what they’ve already seen. What they need, and this is my motivation in the industry, is something that they haven’t seen, and they’re going to leave there and remember you.”

Even setbacks have turned into successes. Weiss initially was turned down for a concessions contract at the Adrienne Arsht Center for the Performing Arts, but three years later—with his first eatery, Barton G the Restaurant, open—he won the job. He said he “reinvented what concession food is all about.” From there, he expanded to open the pre- and post-theater Prelude by Barton G. restaurant inside the arts center with an online reservation component that was unique at the time. His third restaurant is in the Villa by Barton G., a boutique hotel he created in the former Gianni Versace mansion in South Beach.

Weiss credited his success to his team of 450 employees. “Their success is really the success of the company," he said. "I am not really the success. I am the ideas guy and [I] constantly push them. They’ve been trained, they’ve lived the Barton G. life, they talk the Barton G. life, and they see everything from a different perspective. And that is taught from the top down.”

One lesson Weiss teaches his staff is to look at what they are trying to achieve and work backwards, all while focusing on the customer’s needs.

“It’s really about the client and their brand,” Weiss said. “Even though Barton G. has a brand, it’s not really about Barton G., it’s about you and your brand. I'm just the platform and the springboard where the ideas come from.”

And where do those ideas originate? Weiss said there is no one source, and his inspiration comes from each task.

“If I see an opportunity that I want to go after or a piece of business that our company is bidding on, it’s looking within me and saying, ‘How are we going to answer an R.F.P. and make something unique where they have to need us?’” he said. “You have to keep reinventing yourself. You constantly have to open your minds to see things completely different. The greatest problem I see is everyone thinks in a box. In my world, there is no box. Because what was right for yesterday or today is not going to be right for tomorrow. The key is to be trained to visualize something that is a fantasy that really is a reality.”

Weiss’s fantasies-come-to-life include five-foot forks sent out with restaurant dishes and building a 30,000-square-foot house in the middle of a Super Bowl party. Still, Weiss insisted that not everything he does is outrageous.

“You don’t want to be over the top. And you also want to make your client feel comfortable with what you’re presenting,” he said. “I believe there is a fine line with going over the top, and there is a fine line with going to the edge, and then there’s safety. We all know, as event professionals, that there really is no safety in our industry. Everything is taking a chance. And don’t be scared of a chance if you believe in it.”