Art Basel Preview: Highlights Include a Fortune-telling Dog, Soccer on the Moon 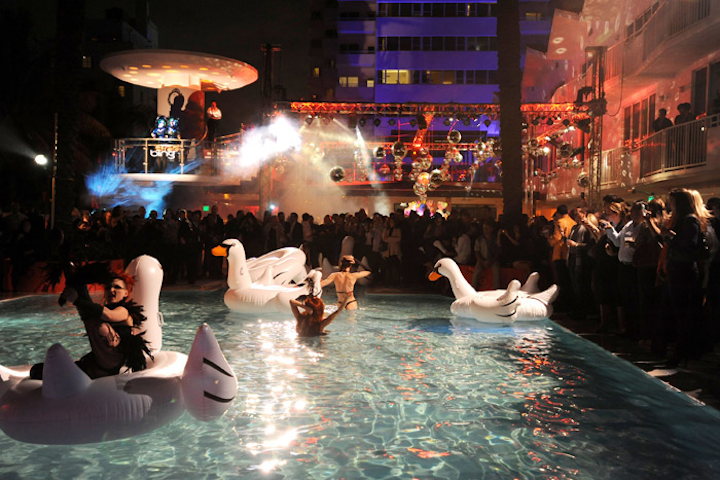 Although the official 11th Art Basel kicks off in Miami Thursday, the parties, product launches, and satellite fairs that piggyback off the contemporary art show as part of Miami Art Week have already begun.

Monday night, Untitled, a new multimedia art fair this week, hosted a preview inside a tent on the sands of South Beach’s Ocean Drive. Also inside was a sizable pop-up bar by Wynwood’s Wood Tavern, sponsored by Beck’s and Miami magazine. Following the launch, V.I.P. guests gathered on the front lawn of the James Royal Palm for cocktails and bites, courtesy of the hotel’s restaurant, Florida Cookery, helmed by chef Kris Wessel.

In the design district and next door to the Moore Building, Brazilian luxury home design brand Ornare's Tastemaker's Showcase was a minimal bash with high cocktail tables wrapped in bunched white fabric bouquets that were decorated with candles and flowers. Couches in white and taupe hues varied in heights, and guests enjoyed refreshments compliments of Beck’s and Leblon.

Untitled is not the only new fair this year: Art Miami, now in its 23rd year, is launching Context Art Miami, which will showcase emerging artists. The show will take place in the Wynwood arts district.

Lords South Beach hotel is turning its entire property into a public art installation sponsored by Perrier. Artist Desi Santiago created a "Wicked Wonderland" in which the all-white hotel has been painted black and a massive dog named Gypsy looks down over the property. His eyeballs are suspended 25 feet over the courtyard and beam laser lights, and he can tell fortunes. The hotel will host a V.I.P. Penthouse Party tonight and Midnight in Miami Thursday from Josh Wood Productions and Boffo.

Brands such as Evian, Lacoste, Perrier, and Sears have events planned this week. Flip-flop brand Havaianas has one of the most involved activations, featuring a beach soccer tournament played in a space designed to replicate the lunar landing site of Apollo 11. The three-day event will see teams of artists, collectors, curators, art critics, and gallerists competing on teams to raise awareness for pollution and erosion of the beaches. Guests will receive a pair of flip-flops, and the players will wear branded uniforms.

Other major events include the Miami Art Museum Ball and Crash the Ball after-party Saturday, planned by Karla Conceptual Events Experiences. Pask Productions is organizing the Bombay Sapphire Artisan Series finale event at the Moore Building Friday. The Inspiration Miami Beach Party, presented by Amfar, Josh Woods Productions, and Interview magazine, is Thursday at Soho Beach House and will include a guest DJ set by Solange Knowles. The Museum of Contemporary Art North Miami and Vanity Fair's kickoff party tonight at MOCA will celebrate both Art Basel and Design Miami.

The event roster suffered one high-profile casualty: The UR1 Music & Art Festival, which was to feature Kanye West, the Offspring, and Lou Reed, was cancelled.

On the retail front, Benetton South Beach is reopening its Miami flagship, working with ExtraExtra, and Prada is opening a store in the Design District.

Art Basel itself takes place at the Miami Beach Convention Center and will include work from more than 260 galleries worldwide. The main sponsor is UBS.