In a time where hospitals are more packed than amusement parks, these hotels are lending a helping hand—and vacant rooms—to healthcare workers on the frontlines of the COVID-19 pandemic. 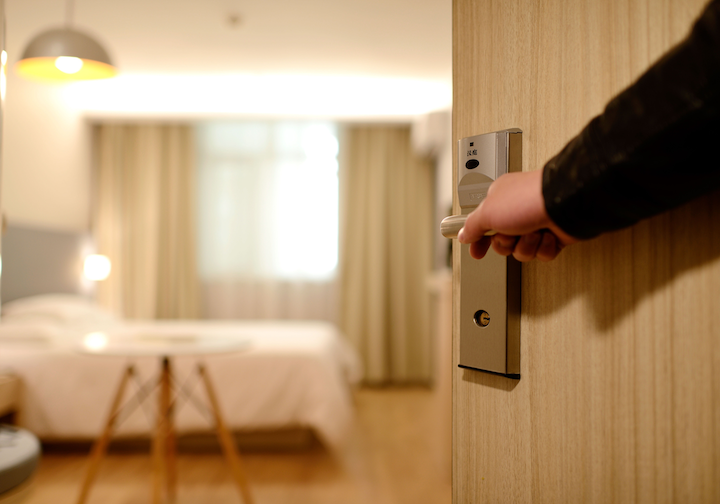 “We’re basically solving one industry’s problem with another. We have hotels that are available for use, and then we have a whole workforce in the hotel and event industry that are the best people to really mobilize and create spaces quickly," says Tracy Judge, founder and chief connector of Soundings Connect. Alongside Rachel Vass, CEO and founder of Syzygy Cities, the two launched the Hospitality + Events Fight Back coalition with the goal of both converting closed hotels into mixed-use rehabilitation centers for COVID-19 patients and enlisting event professionals to assist in the transition—using their skills at repurposing venues meant for one activity for another.

This marks just one of many charitable efforts from the hospitality industry to extend services to help healthcare workers during the pandemic. All across the globe, hotels that once catered to business travelers, vacationers, and eventgoers were forced to hang a metaphorical closed sign on their properties due to restrictions surrounding COVID-19. But lately, the signs have slowly been removed to make room for healthcare workers on the frontlines of the medical crisis.

In April, Marriott announced its $10 million Rooms for Responders initiative in partnership with American Express and JPMorgan Chase, providing rooms free of charge to healthcare workers in highly impacted areas of the United States—such as New York City, Chicago, Los Angeles, and Washington, D.C.—through a collaboration with the American College of Emergency Physicians and the Emergency Nurses Association. In addition, the global hospitality brand is extending a helping hand in other parts of the world (think Canada, the Caribbean, and Latin America) through the launch of its Community Caregiver Program, which offers significantly discounted rates at nearly 2,500 properties for first responders and healthcare professionals who want to book rooms at hotels within close proximity to the hospitals. "With both initiatives, our goal is simple—we want to support the frontline heroes who are selflessly supporting us," said Marriott president and CEO Arne M. Sorenson in a press release.

Similarly, Hilton announced a partnership with American Express that's led to one-million hotel rooms across the U.S. offered at no cost to medical professionals fighting the coronavirus. “During this crisis, we have seen so many examples of medical professionals working in the most challenging circumstances, sacrificing their own needs for the greater good. They truly are heroes,” said Hilton president and CEO Christopher J. Nassetta in a press release. “We are honored to extend Hilton hospitality to them during this difficult time.”

Even on a local level, hotel brands are stepping up to the plate to help the same people that once filled their rooms under different circumstances. In Nevada, Las Vegas Sands, which owns The Venetian and The Palazzo, has donated two million surgical masks, 20,000 protective suits, and 1,900 coronavirus test kits, among other acts of altruism. "This pandemic has called on each of us to use every ability we have to help those most impacted by the crisis," Las Vegas Sands chairman Sheldon G. Adelson told BizBash. "Getting personal protection equipment to our healthcare professionals and first responders in Nevada and New York is critical to keeping those brave folks safe while making sure they can do their jobs to aid our most vulnerable citizens."

Michigan-based AHC Hospitality partnered with parent company Amway and got creative to sponsor a four-week virtual dance competition, dubbed The Groove, to raise money for Michigan’s healthcare workers through the West Michigan Heroes Fund. "Now that we’re all spending more time at home, the competition is a fun, creative outlet and easy way to connect with our friends and family while supporting our local health heroes in west Michigan,” says Chad LeRoux, vice president and CMO at AHC Hospitality, of the virtual event running through May 30.

At NYC Health + Hospitals/Elmhurst, which serves an area of nearly one-million people in New York, healthcare workers were surprised last week by Hyatt and American Airlines, who teamed up to offer the hospital's 4,000-plus frontline medical professionals a well-deserved three-night complimentary vacation (once they're able to, of course) with roundtrip airline tickets to boot.

And the same rings true for Canada. From The Grand Hotel Toronto to Vancouver's Accent Inn to the Fairfield Inn and Suites Kanata in Ottawa, many hotels are opening up their rooms for free or at discounted rates to help healthcare professionals. "We see this initiative as our civic duty and acknowledge the efforts of those who are continuing to work long days and nights to keep patients safe and COVID-19 at bay," said The Grand Hotel Toronto general manager Heidi Wengle in a press release. "We will do whatever it takes to help make the hotel stay for these heroes feel like a home away from home."

Keep scrolling for a look at hotels across the globe continuing to light up any vacant rooms to spread a message of hope and gratitude for the world's healthcare heroes fighting COVID-19.