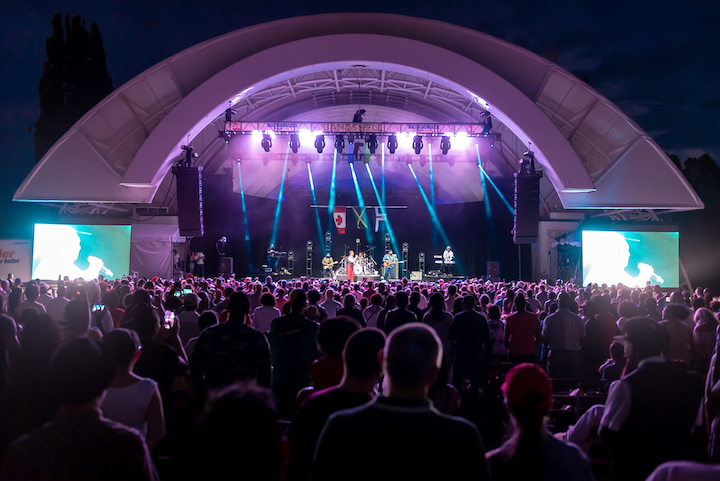 In Case You Missed It
Reznick Carpets, a specialty temporary carpet and floor vinyl supplier based in Toronto, has launched a new flooring line designed to help consumers maintain physical distancing once stores start reopening. Featuring a variety of bright colors, styles, and weatherproof options, the layouts use a pattern of segments to mark where customers can stand to keep two meters apart while in a line. Company director Lianne Fonseca said the idea was conceived to pivot away from the company's business of creating carpeting for seasonal award and gala events.

News
Streetcar Crowsnest’s Gare de l’Est French restaurant and Crow’s Theatre have launched a “Dinner and Show” series. The service delivers specially curated three-course meals and sommelier-selected wine for two by Gare de l’Est head chef, John Sinopoli, in advance of the livestreamed performance. On May 20, the schedule starts with “M: A Night in Moscow with the Master and Margarita”—an adaptation of Mikhail Bulgakov’s novel—accompanied by a Russian cuisine-inspired dinner of warm fingerling potato salad, chicken kiev, and bird’s milk cake. Proceeds from the evenings will go to support SaveHospitalityCA.

Inside Out, Canada’s largest LGBTQ film festival, announced that 10 feature film projects will be featured in its fourth finance forum from May 26-29, when the festival normally takes place. The digital event invites creators and producers to pitch their vision for funding consideration to Inside Out, as well as production companies and sponsors including Netflix, Bleecker Street, IFC Films, Gamechanger Films, Killer Films, MK2, Bankside Films, Powderkeg Studios, and GLAAD. Inside Out recently shared a fundraising video showcasing filmmakers answering the question of why queer film is essential, and the 2020 festival is expected to take place from October 1-11.

And in spite of restaurant closures, Pompette, a new French bistro in Little Italy, opened in time for Mother’s Day this weekend. Meals, a la carte items, pantry fixtures, wines, and beers are now available for delivery and contactless pickup. Although the restaurant’s Instagram shows its sign being installed at the location in late April, it’s been previewing the opening since early December.

Turn of Events
Following many restaurants boycotting UberEats for taking to 25 to 30 percent of revenue from food orders, Beck Taxi company announced it is offering a $10 flat rate for delivery orders within a three-kilometer radius of the restaurant, according to Now Toronto. “Most deliveries are within a three-kilometer radius anyway,” says Beck’s operations manager Kristine Hubbard. “There’s a bit of a hostage scenario that these apps have presented for restaurants. You’re damned if you do, damned if you don’t.” Although it’s operating fleet has been reduced by 75 percent, Beck still has 300 vehicles on the road.

Meanwhile, the Canadian National Exposition (CNE), which was scheduled to run from August 21 to September 7, has been canceled for the second time in 142 years. “Safety always comes first at the CNE, and the decision to cancel our event is the right decision during this critical time to protect the health of all Canadians,” said John Kiru, president of the CNEA. “Summer in Toronto will not be the same without the sights and sounds of the CNE, alongside so many annual festivals and cultural events that have been forced to cancel. We stand in solidarity with the collective effort to curb this global pandemic, and we will all do our part to ensure it happens.”

Overheard
“[It’s] a positive first step in what will be a methodical, long-term process of returning to play safely. We expect that we'll see different parts of the country enable a form of rugby, or certainly training evolving into smaller gatherings. We're not going to immediately jump back into 15-a-side rugby full-on.”

On the Scene
On May 9, the Canadian Forces Snowbirds flew over Toronto and across Southern Ontario to lift spirits during lockdown.

What’s Next?
Beginning this evening, Brookside Chocolate Trivia is launching a four-part pop culture virtual trivia series on movies, sitcoms, reality TV, and throwback tracks from the 2000s. Events will be hosted by Toronto’s Jen McNeely of She Does the City, Rachel Kelly of Make Lemonade, Danielle Finestone of TOFoodies, and Emily Mills of How She Hustle. Winners will receive assorted gift packages from Brookside Chocolate, which is also donating $5 per trivia participant to Food Banks Canada.

As part of its Coronavirus Dialogue series, Meeting Professionals International (MPI) Academy’s “Work From Home Revolution” webinar will air on May 20. Sponsored by The Idea Hunter, the session will be hosted by Canadian technology expert and author Marc Saltzman, covering topics on maximizing productivity while working from home, part-time and long-term home offices post-quarantine, and concepts of combining physical and virtual work habits over the next decade.