When CanWest Distributors asked public relations and marketing company the Idea Workshop to create an event introducing the four-year-old Ice-Watch brand to local media and buyers, they knew they needed something that would quickly leave an impact on busy reporters who might have only a few minutes to drop in.

"We were looking for a simple, raw space," said Anna Ng, new media and account manager at the Idea Workshop. "The Richmond happened to be in a central area, in the middle of the fashion district, which was perfect."

Each guest received a hand-delivered invite that stood out from regular mail because it was inside an Ice-Watch box—a Lego-like case that each watch is packaged in and that also doubles as a change bank.

Decor at the event itself was largely based around that same box, with the entire collection displayed inside one of the Lego-like glass cabinets used to showcase the watches at retail venues. For added effect, the Idea Workshop hired the Iceman to create a replica of the display cabinet carved out of ice.

Caterer Daniel et Daniel provided cookies imprinted with images of the watches; marketing campaigns and product images were projected on the wall; and the music video for the Black Eyed Peas' "The Time"—which prominently features Ice-Watches—played in a loop on a TV screen. For those guests who could stay a little longer, a small, all-white lounge area was set up for sit-down press interviews.

"We had 40 journalists representing 25 media outlets attend, so the client was really thrilled with the outcome," said Ng, who was especially pleased with the turnout given that the launch, held February 1, coincided with a sizable snowstorm.

Departing guests received one last plea to keep Ice-Watch on their minds: a gift bag stocked with their own take-home watch. 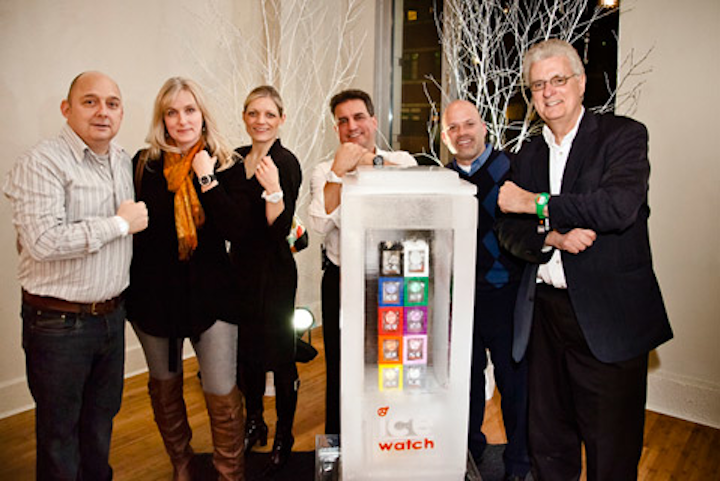 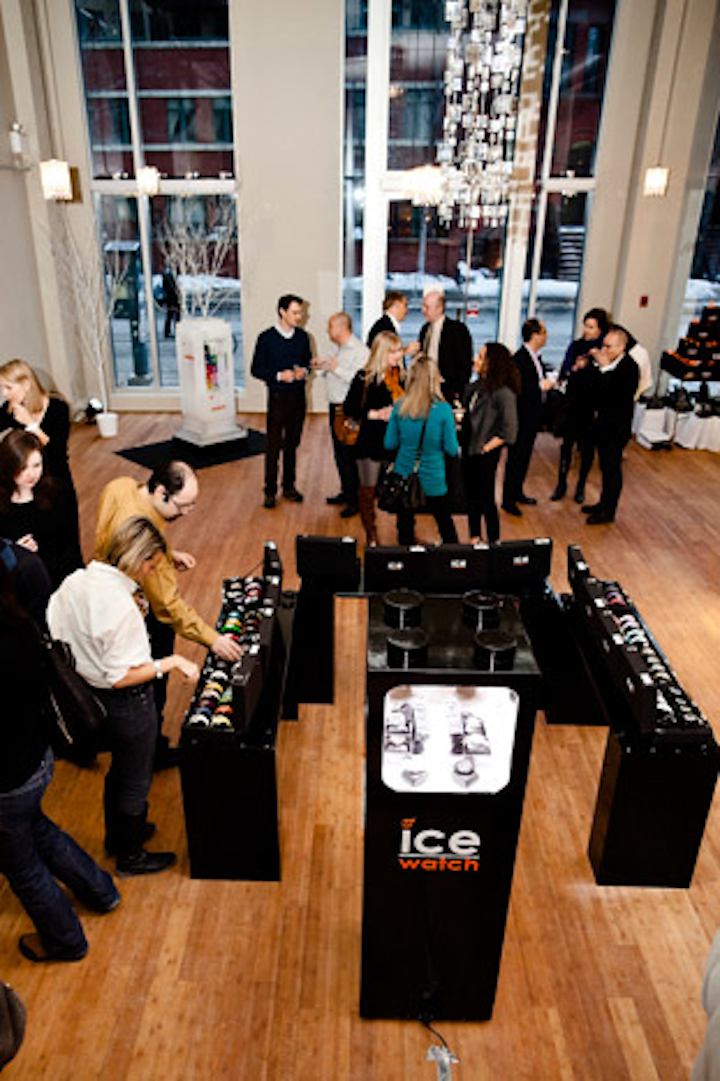 The Ice-Watch Canadian launch party for media and buyers was held at the Richmond.
Photo: Josh Fee for BizBash 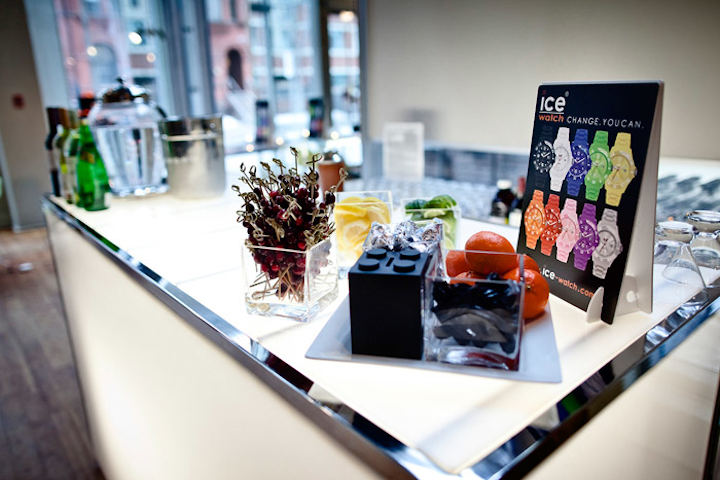 Ice-Watch's signature Lego-like case was featured in everything from invites to bar decor.
Photo: Josh Fee for BizBash 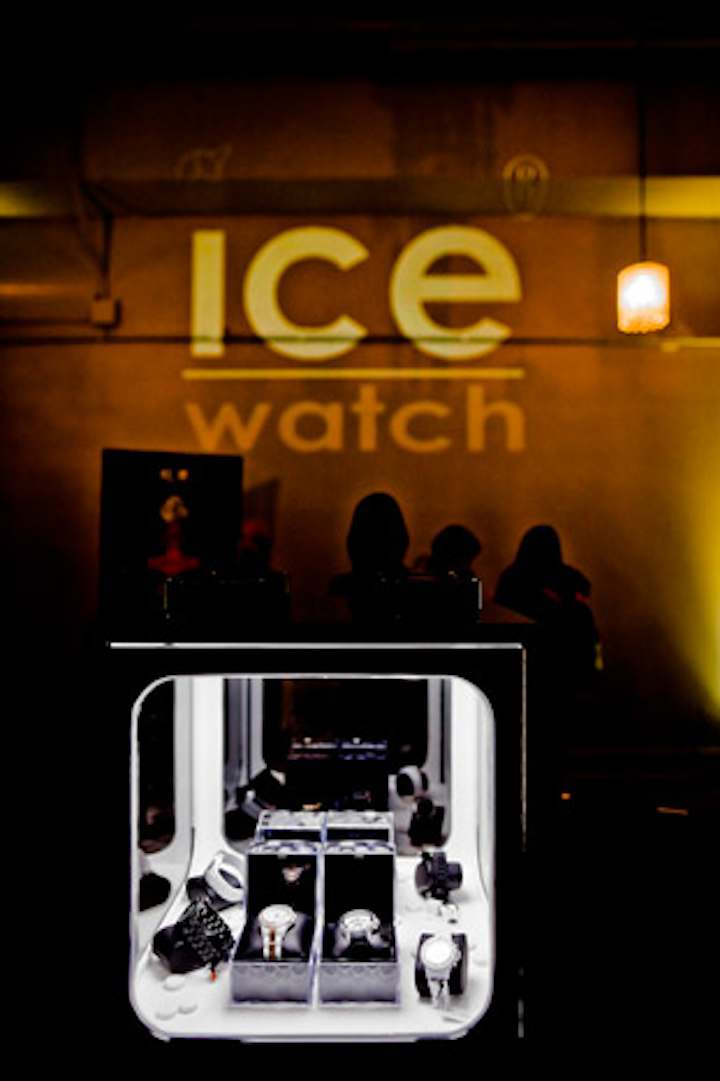 Most of the decor for the event consisted of Ice-Watch's existing display cases.
Photo: Josh Fee for BizBash 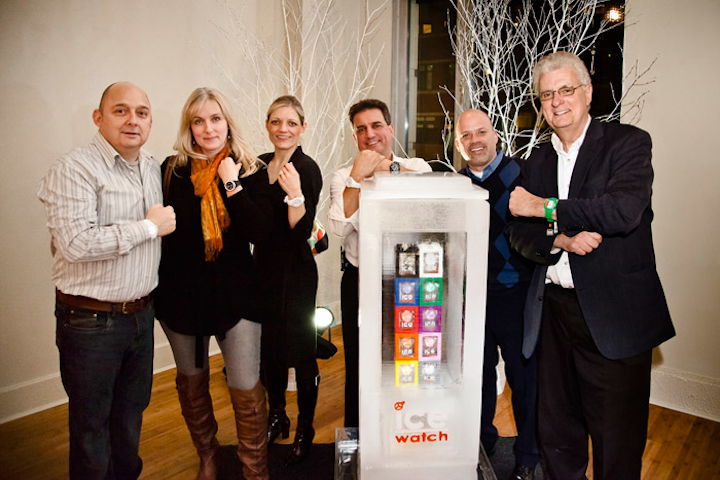 More watches were displayed inside an ice sculpture replica of the cabinet.
Photo: Josh Fee for BizBash 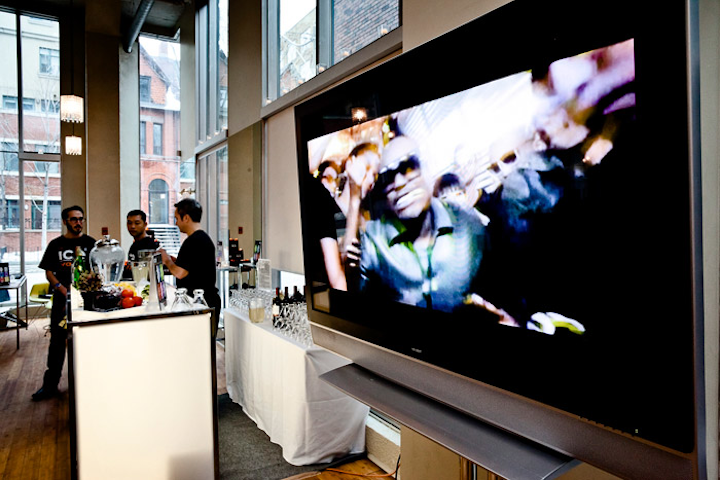 A Black Eyed Peas' video featuring Ice-Watches was an obvious choice for a video display.
Photo: Josh Fee for BizBash 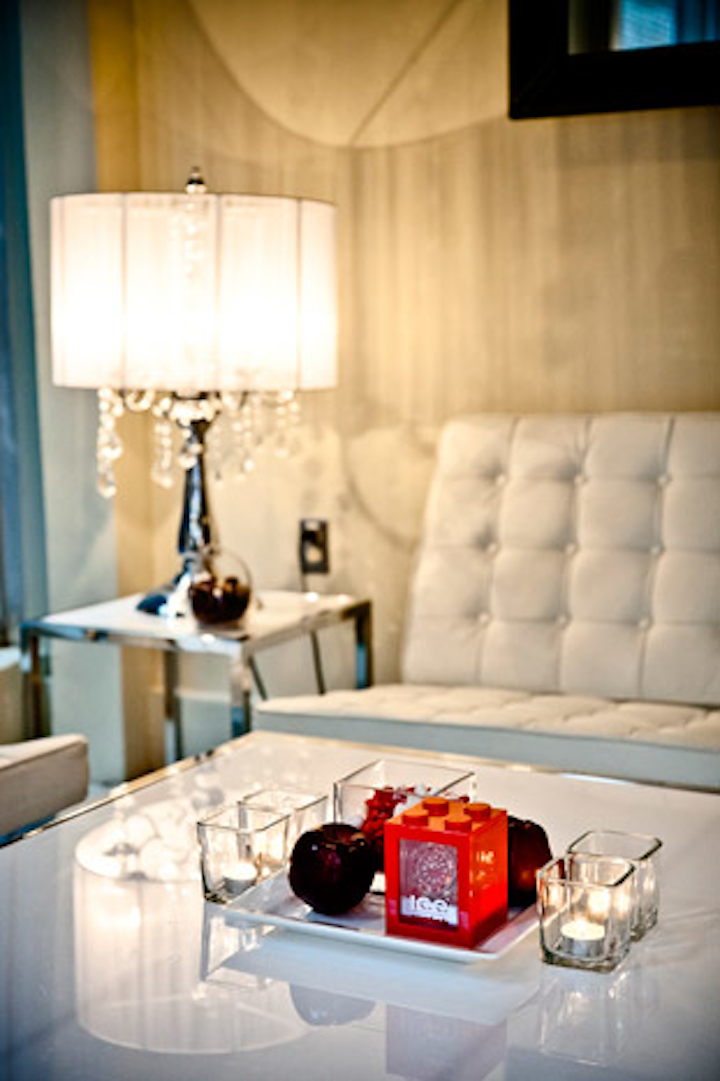 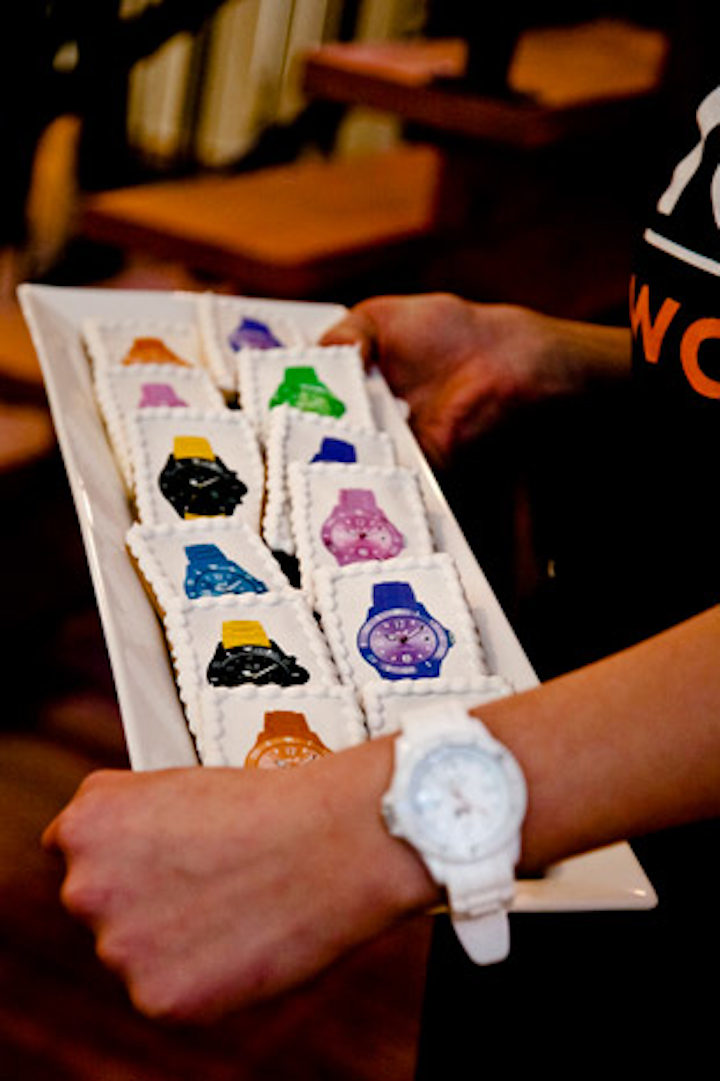 Daniel et Daniel designed cookies with images of the watches imprinted on them.
Photo: Josh Fee for BizBash 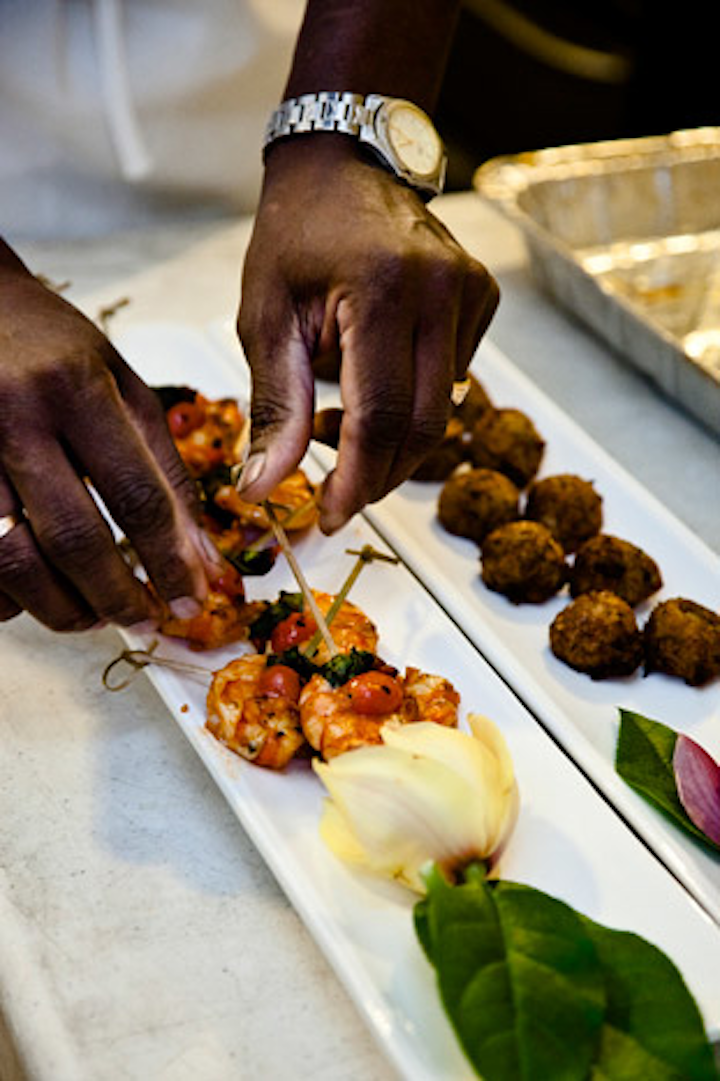 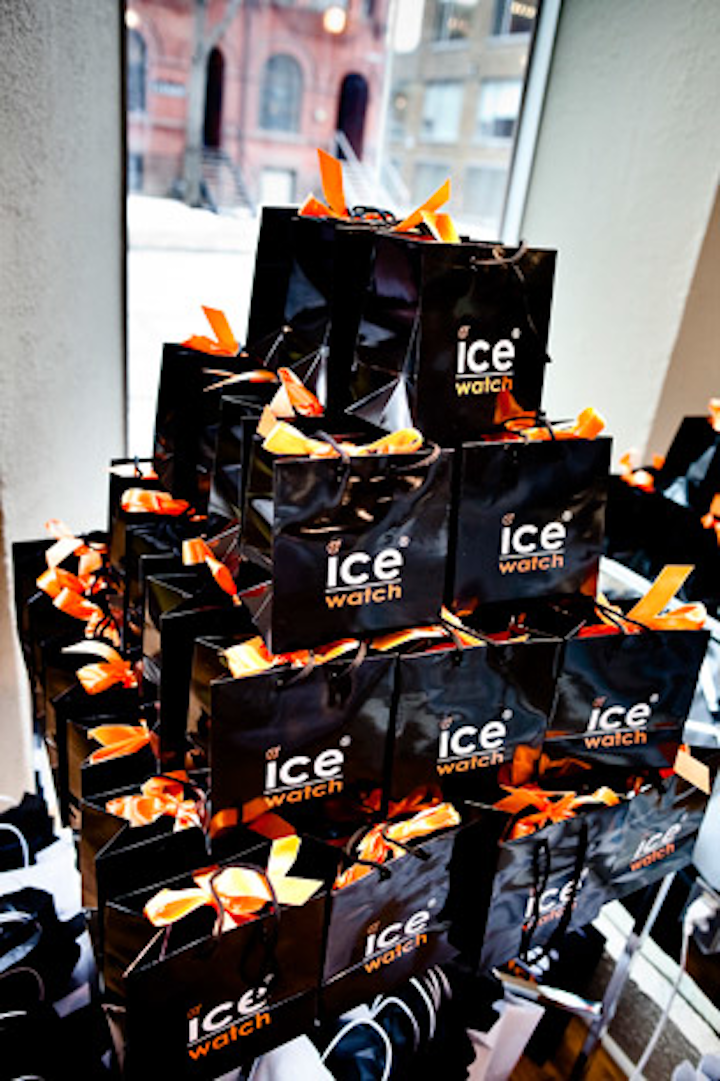 Before leaving, guests took home an Ice-Watch of their own.
Photo: Josh Fee for BizBash
More in Toronto