In a bid to draw attention and continue to market Glenfiddich as a valuable whiskey brand, family-owned distiller William Grant & Sons made the sale of a bottle of the 55-year-old Glenfiddich Janet Sheed Roberts Reserve the centerpiece of a New York event. The gala for 150 guests took place at Liberty Island on Thursday, March 12, and kicked off the yearlong celebrations for Glenfiddich's 125th anniversary. Rather than host a seated dinner, the spirit maker opted for a reception-style affair in a heated tent overlooking the Statue of Liberty.

"The night wasn't about long speeches with people sitting quietly and listening to us. We really wanted it to be a celebration and a lot of fun," said Lindsay Prociw, the New York-based senior brand manager for Glenfiddich at William Grant & Sons. "It was just such good fortune that the Grant family was able to provide us with one of these 55-year-old Janet Sheed bottles, and that gave us a focal point." Indeed, the live auction of the collector's item was the dramatic focus of the evening, with a bidding war that finally ended with a record-breaking price of $94,000.

To bring the event back home to the anniversary and what the company considers founder William Grant's pioneering spirit, Glenfiddich partnered with SHFT Initiatives, the sustainability-focused nonprofit founded by producer Peter Glatzer and actor Adrian Grenier. Proceeds from the auction benefited the charity. "We really got into this mindset of modern-day pioneers, and what we loved about SHFT is they promote sustainability, which is important to Glenfiddich and, surprisingly, how we've operated for the last 125 years," Prociw said. "More importantly, SHFT promotes sustainability in every facet of life, supporting people and ideas about changing the culture of sustainability."

Also part of the concept was the location: The Statue of Liberty turns 125 this year as well. To add to the event's overall decor, Glenfiddich included photos from the construction of the famed monument alongside images of the company's distillery being built.

Nevertheless, the site, which can only be accessed by boat, posed some challenges for the producers. Setup started almost a week in advance, and equipment traveled to the island via barge. And as there was only one ferry to take attendees to the event, Prociw and her team made sure to emphasize the departure time on the invitation. "On the invite, it said 7 p.m. sharp and it was, 'If you miss the boat, you literally miss the boat.'" The organizers did end up holding the ferry for a guest, a bidder in the auction.

Aside from that early delay early on, the evening went smoothly, with appearances by Grenier and co-host Glenfiddich malt master Brian Kinsman, who traveled in from Scotland for the occasion. William Grant & Sons has nine further anniversary events planned for the U.S. this year, as well as more in other countries. 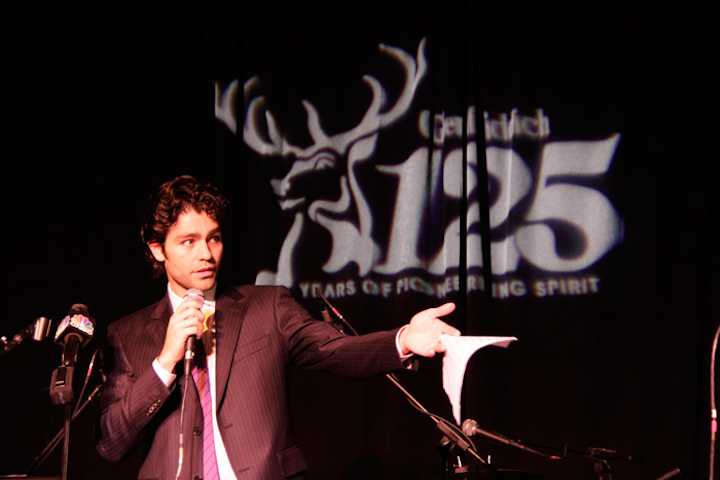 Grenier also played host and, in addition to explaining SHFT, the nonprofit he started, offered himself up in the live auction.
Photo: Jika González for BizBash 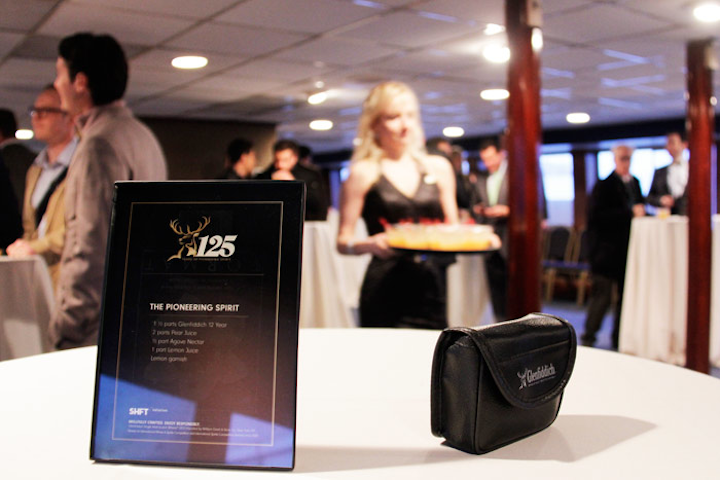 Guests at the Glenfiddich anniversary event traveled to Liberty Island via a private ferry that left from a dock in Battery Park. To establish the event's messaging early on, the organizers outfitted the boat with cocktail tables and branded binoculars, with waitstaff serving custom cocktails like the "Pioneering Spirit."
Photo: Jika González for BizBash 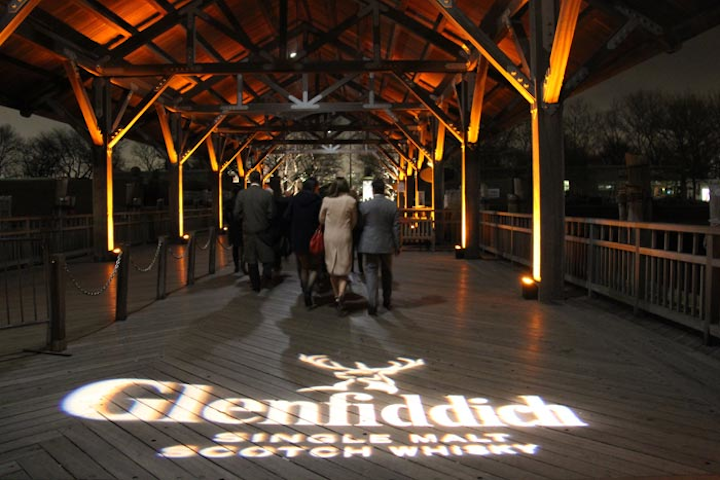 Glenfiddich also put its logo on the boat piers, with signage at the departure area in Manhattan and a gobo projection on the dock at Liberty Island.
Photo: Jika González for BizBash 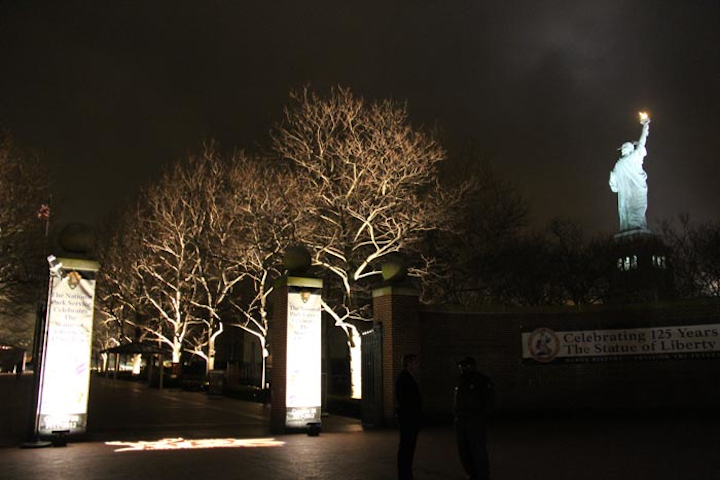 Further into Liberty Island, more lighting and projections helped lead attendees to the event's location. The illumination of Lady Liberty added to the evening's atmosphere.
Photo: Jika González for BizBash 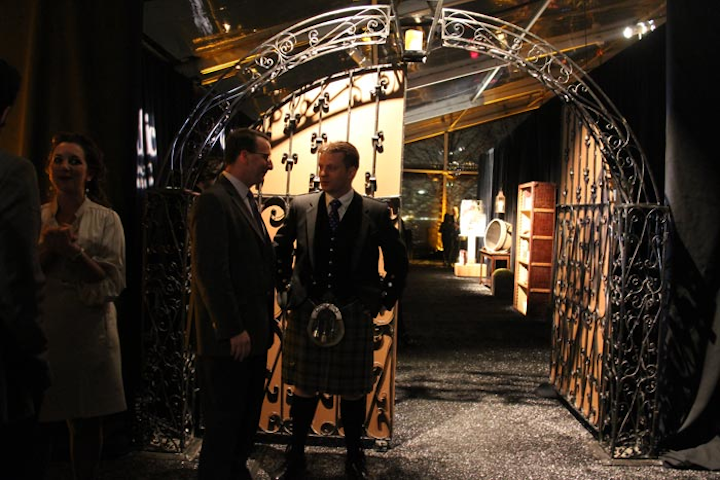 The event was housed inside a heated tent where black carpeting and draping created an intimate backdrop for the decor. A garden gate-like structure stood just beyond the step-and-repeat, marking the entrance to the reception.
Photo: Jika González for BizBash 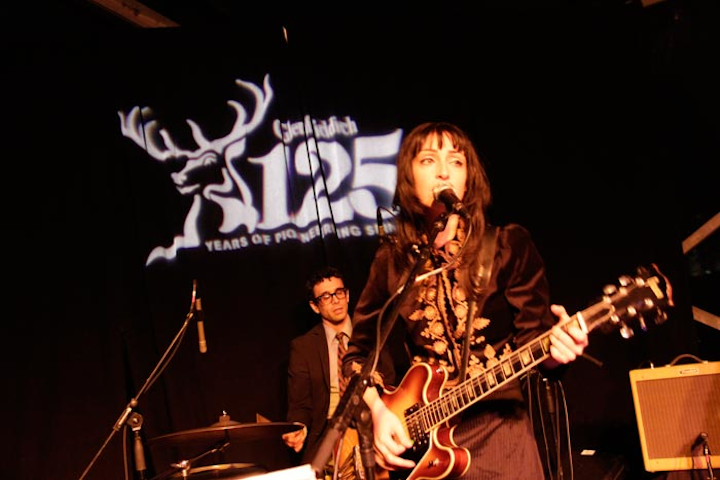 A band performed from the stage during the early hours of Glenfiddich's anniversary celebration, providing an upbeat tempo for the reception.
Photo: Jika González for BizBash 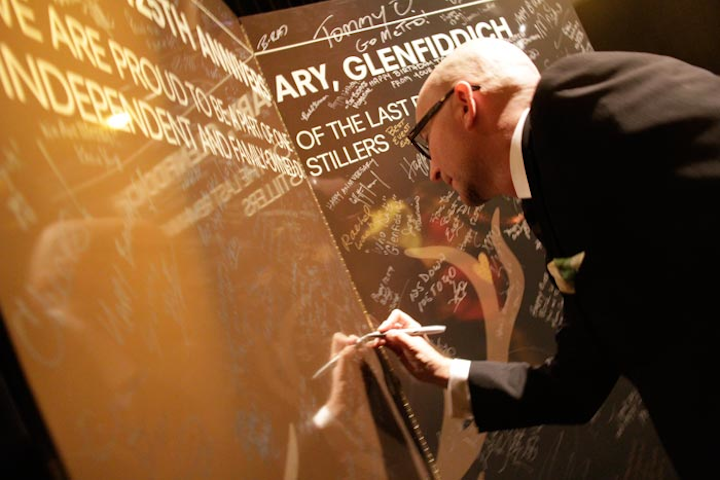 The production team placed different activities around the open-plan reception space, including an oversize card that guests could sign with a silver-colored marker. The piece will be transported back to the William Grant & Sons distillery.
Photo: Jika González for BizBash 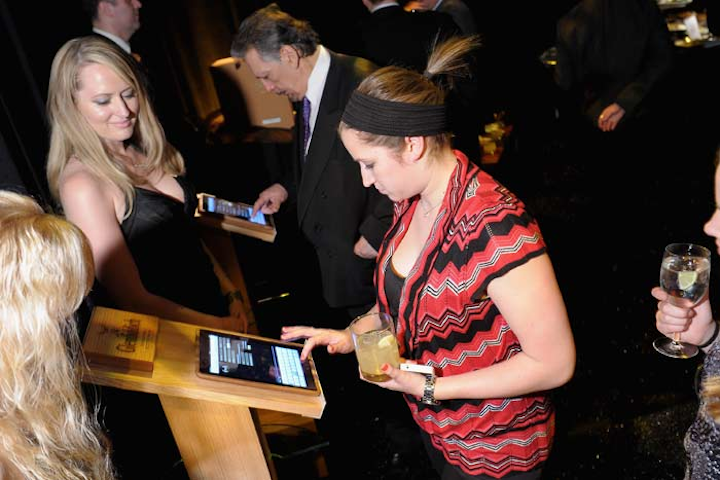 At iPad stations, attendees could sign up to become members of the Glenfiddich Explorers club, which provides access to news, upcoming events, and contests.
Photo: Michael Loccisano/Getty Images for Glenfiddich 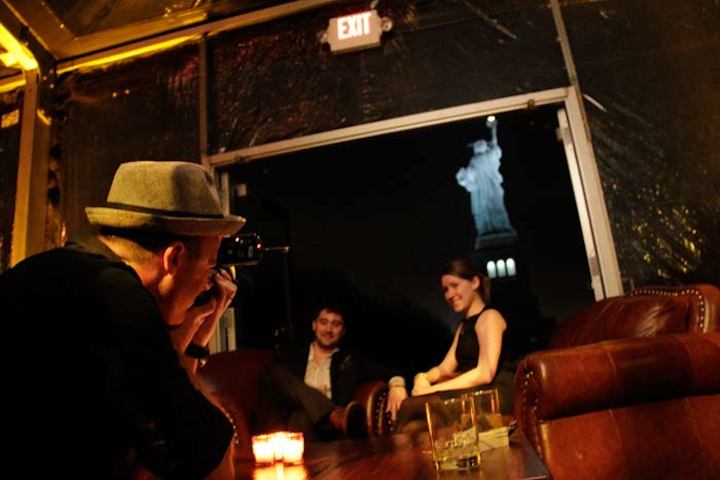 Other activities included Bring Into Being's photo-op area in front of the Statue of Liberty.
Photo: Jika González for BizBash 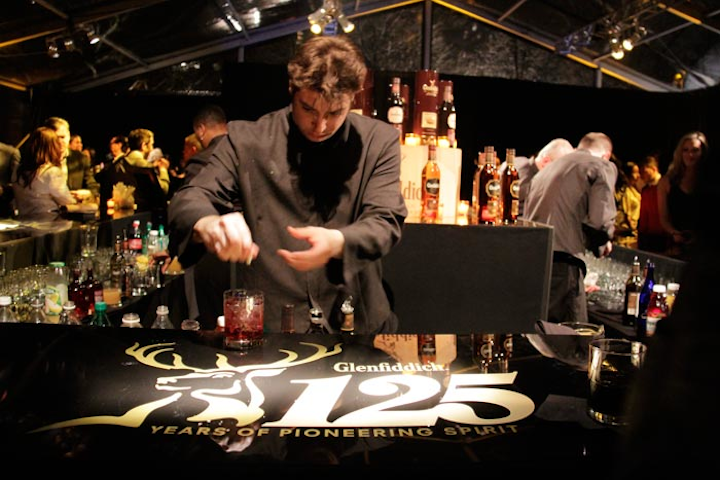 The surface of the main bar, a four-sided structure that stood at the center of the tent, was emblazoned with the Glenfiddich logo and imagery for the anniversary.
Photo: Jika González for BizBash 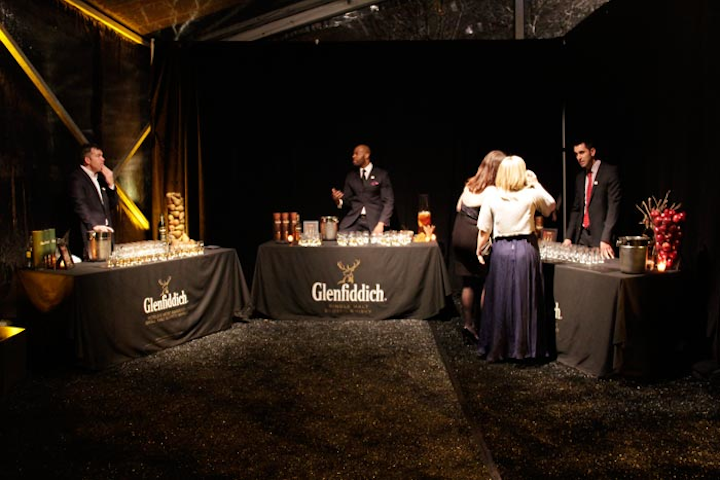 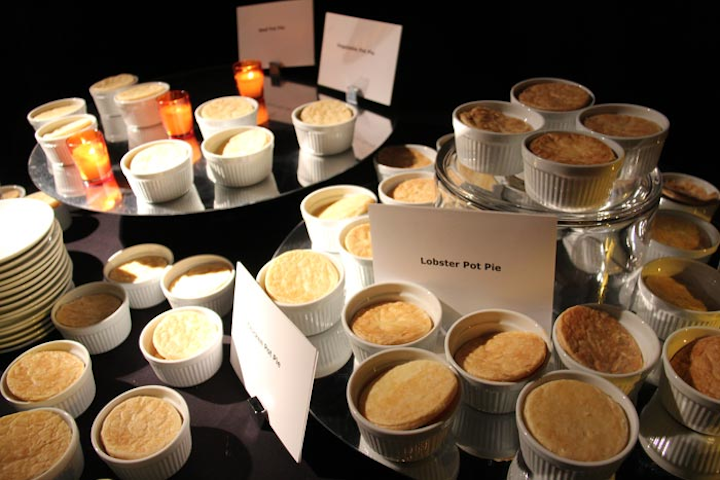 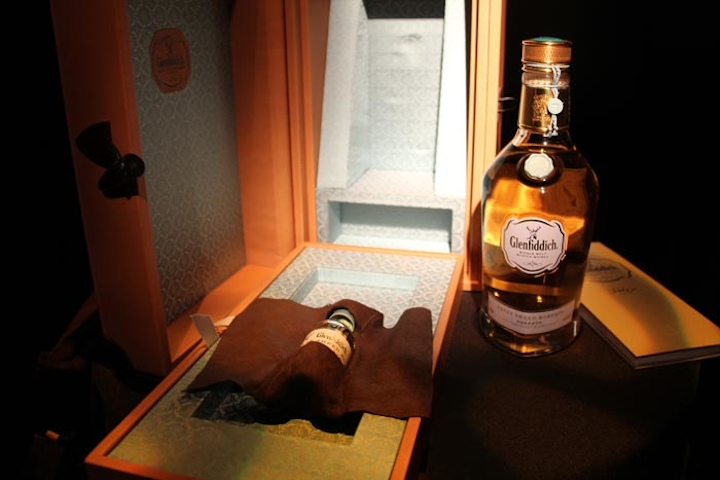 The bottle of the Glenfiddich Janet Sheed Roberts Reserve, one of only 11 in the world, was on display for guests before the auction.
Photo: Jika González for BizBash 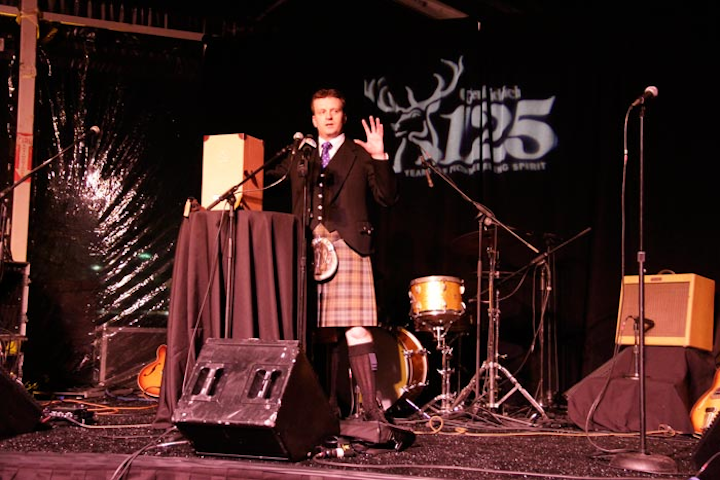 Glenfiddich malt master Brian Kinsman served as the host of the event, alongside actor Adrian Grenier. The brand's representative, who oversees the quality of the spirits, spoke about the bottle up for auction and the company's pride in its whiskeys.
Photo: Jika González for BizBash 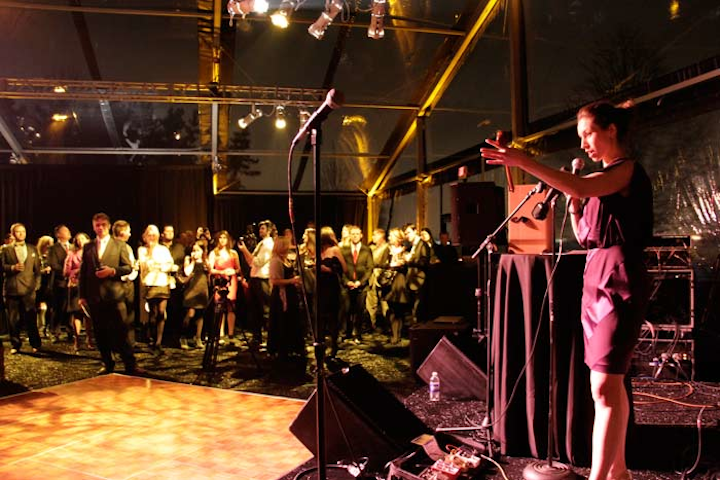 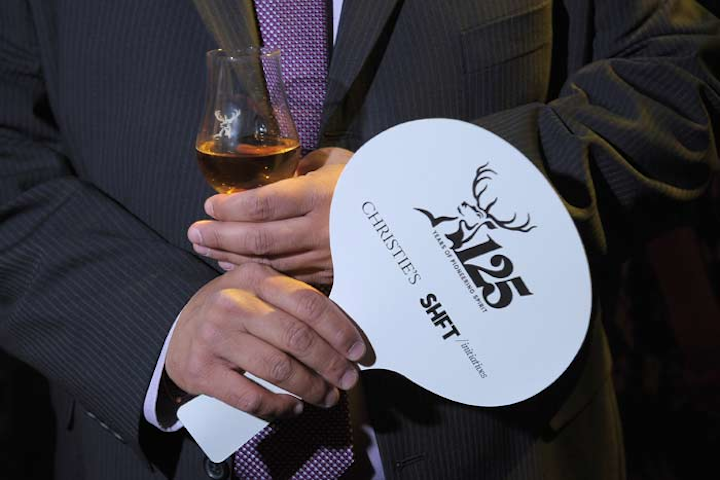 Before the auction started, guests could pick up a branded bidding paddle.
Photo: Michael Loccisano/Getty Images for Glenfiddich 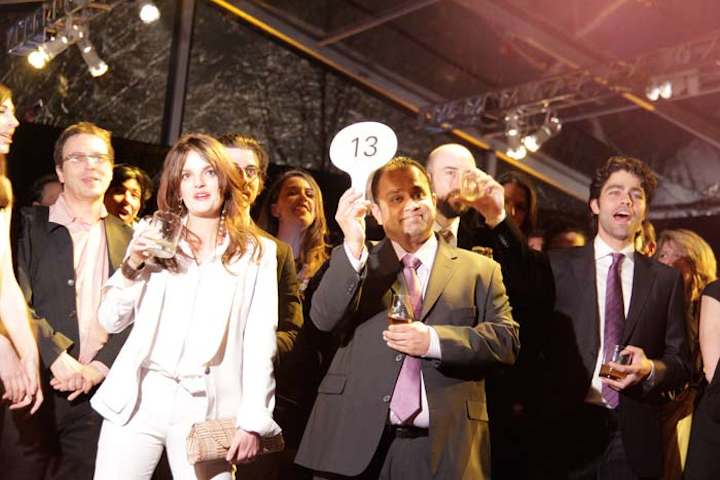 The heated bidding war for the rare single malt ended with whiskey investor Mahesh Patel's bid of $94,000, which broke the record for the most expensive bottle of whiskey ever sold at auction.
Photo: Jika González for BizBash
More in Social Events