How the blockbuster food event will adjust its event programming, starting today in Fort Lauderdale. 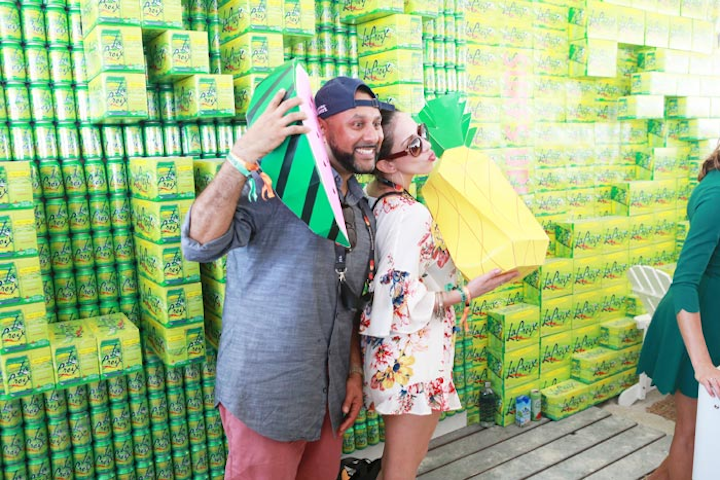 Sparkling water brand La Croix, back as a sponsor, will activate at the Grand Tasting with multiple mocktails. Providing more options for non-drinkers is one of the trends at this year's festival.
Photo: Seth Browarnik/WorldRedEye.com

The 18th annual Food Network and Cooking Channel South Beach Wine & Food Festival kicks off today for a five-day run of more than 100 events spanning from South Beach to Brickell to Fort Lauderdale. More than 60,000 people will flock to its events, from seasoned foodies to curious indulgers, which means the event programming needs to keep up with consumer demands. Along with festival mainstays like the Grand Tasting, Burger Bash, and Art of Tiki Cocktail Showdown, there are many new events this year. From day-drinking-driven parties to celebratory cultural eats, and the first-ever Drag Brunch, here’s a look at new offerings and what festival founder Lee Brian Schrager says they add to the festival.

Events That Reflect New York’s Influence
Even though the South Beach Wine & Food Festival has been in existence longer than the 11-year-old New York City Wine & Food Festival, the Miami event continues to use its sister event in the fall as a canvas of experimentation and influence. For instance, the new Drag Brunch, hosted by Elvis Duran and Alex Carr, was conceived at the New York event in October. According to Schrager, “it made a lot of sense,” because the brunch is partnering with Pride Fort Lauderdale, which unfolds this weekend, as well.

Another event that was influenced by the New York edition is Saturday’s Sunset Spritz Party hosted by Valerie Bertinelli. “This was a very popular event in New York, and we were committed to building the programming in Fort Lauderdale,” says Schrager. “Valerie is someone we knew would be a great fit.”

Additionally, Capital One is a first-time presenting sponsor for the festival's Crave Fort Lauderdale series, thanks to a successful run last fall in New York. “This is just good fortune for us,” says Schrager. “It’s just a win when you can have such continuity [between both events].” Capital One is the presenting sponsor at 12 different events, including the sole Wednesday event, a dinner hosted by Donatella Arpaia, P.J. Calapa, and Terra Mare at the eatery inside the Conrad Fort Lauderdale Beach; Clambake hosted by Alex Guarnaschelli and Jorge Ramos on Friday night; and both the Drag Brunch and Sunset Spritz.

More Daytime Boozing Events…
Several new events this year are geared toward the day-drinking crowd, including the Rose Pool Party hosted by Geoffrey Zakarian at Eden Roc on Saturday afternoon. “I’ve wanted to do a rose pool party for years,” says Schrager. “It was really just about finding a hotel to work with us that would shut down their pool, and Eden Roc has multiple pools, so it worked out perfectly.” Additionally, Martha Stewart will host a Wine & Cheese Happy Hour, Bertinelli will host Sunset Spritz, and guests can take part in two interactive, cocktail-theme master classes.

…While Offering More Choices for Non-Alcoholic Beverages
This year’s festival will go beyond water and soda for festivalgoers who don’t want to drink. Heineken 0.0 will serve its new non-alcoholic beer throughout the weekend, and La Croix will activate at the Grand Tasting with featured mocktails. “Not everybody drinks wine and spirits,” says Schrager. “We try to appeal to as many people as possible.” Additionally, of Heineken’s decision to launch the 0.0 line at the festival, he said, “Miami is a great launching ground, especially when you have 4,000 people at a signature event. If I were going to launch something, Burger Bash would be it.”

A Fresh Lineup for Fans
Even though there are several signature events that hold their time slots each year (including Burger Bash, Best of the Best, and of course, both Grand Tasting sessions), the festival continues to experiment with its schedule. This year, the Beachside BBQ event returns for a second year but will switch to Saturday night from Sunday, while the Bacardi’s Beach Carnival will take the closing slot Sunday night. “We always try to switch it up a bit,” says Schrager. The festival’s Sunday lineup, which has catered to a more locally driven crowd in recent years, as out-of-towners tend to depart before the festival’s finale, ends with Miami-based Bacardi helming the action.

A Spin on Lunch-and-Learns
Hands-on attendees can take advantage of several cooking classes this year, like pizza-, pasta-, and cookie-making, several of which are accompanied by a lunch element, for the first time (and there's a plant-based cooking masterclass that comes with dinner). Why so many back-to-basics themes? “These are my favorite things,” Schrager says. “And it’s torturous to do something like this and not eat the food, so it made sense to extend the day.”

Events with Cultural Connections
The festival continues to honor cultural eats with standalone events. This year, new events include: Taste of Puerto Rico at SLS South Beach; Taste Jamaica at National Hotel; Mangia! A Taste of Italy After Dark at Casa Tua Cucina; and Rock 'n Roll: An Asian Night Market, a late-night event at Dune at Auberge Beach. “This programming is important to the festival, because it is different than what we have done,” says Schrager.

Taste of Jamaica developed from a sponsorship of the country’s tourism board, while Taste of Puerto Rico “was a very easy ask” of chef José Andrés, who organized hunger-relief efforts for residents there following Hurricane Maria. “We presented this idea, and he loved it; it’s relevant to his commitment to Puerto Rico, and perfect timing with his new book coming out.”