The 2011 Sony Ericsson Open didn't officially kick off until Monday morning, when the players hit the courts of the Crandon Park Tennis Center on Key Biscayne for the qualifying rounds. But the parties surrounding the two-week tennis tournament began in earnest the day before and continued throughout the week. Here's a look at the first serving of tennis-themed events in and around Miami.

Sony Ericsson Xperia Hot Shots launch
As part of the brand's sponsorship of the Women's Tennis Association, Sony Ericsson is launching Xperia Hot Shots, a Web-based TV show that follows the lives of six players on the tour. On Sunday afternoon, those players were revealed to the public at an event at the Surfcomber Hotel. Sony Ericsson brand ambassador Maria Sharapova was also on hand as the players—Bethanie Mattek-Sands, Heather Watson, Alize Cornet, Sabine Lisicki, Sorana Cirstea, and Dominika Cibulkova—were announced and introduced on a 36-foot-tall stage replica of the Xperia Hot Shots Facebook page. DJ Jazzy Jeff provided the soundtrack for the party, which also included on-stage interviews with each of the Hot Shots stars and Sharapova. The event was planned by London-based Iris Experience, with decor and sound by Everlast Productions and video by the UK's Monkey Kingdom Productions. The Surfcomber Hotel handled the bar and valet services, and event PR was by Elliott Stares.

Sony Ericsson Xperia PLAY Launch
Capitalizing on its own tournament's tennis talent, Sony Ericsson hosted a preview of its new Xperia PLAY, the world's first PlayStation-certified Android smartphone, within the Sony Ericsson Players Party at the Paris Theatre in Miami Beach on Tuesday night. Harrison & Shriftman produced the V.I.P. party-within-a-party, in an intimate space overlooking the larger event. Highlights included a DJ set by Philadelphia-based DIPLO and the chance for guests to try the gaming capabilities of the new phone. Lighting and fabrication was provided by SRX Events and furniture was from Lavish Event Rentals. Cocktails from Grey Goose and Bombay Sapphire were available at the bar, while waiters circulated the room offering guests cookies and milk in shot glasses served on tennis racquets.

GR8 Miami Charity Event
Entertainment and event-planning company GR8 Miami called on ATP World Tour number two player Novak Djokovic to help raise funds for the Red Cross of South Florida and Japan earthquake victims on Wednesday night. The dinner for close to 200 people took place at the JW Marriott Marquis Miami's 19th-floor tennis court/event space, with Djokovic's fellow ATP players, Rafael Nadal, Kei Nishikori, and Jurgen Melzer also in attendance. More than $20,000 was raised from ticket sales and silent auction items that included soccer balls autographed by the tennis pros. The dinner was planned in just three and a half days, said publicist Natalie P. Mikolich. "We at GR8 Miami, like others around the world, are deeply concerned about the humanitarian crisis facing the people of Japan," said Barnabas Carrega, GR8 Miami co-founder. "We were grateful for the opportunity to join Novak and his fellow players in this charitable event."

Maria Sharapova's Spring 2011 Collection Launch for Cole Haan
Cole Haan took advantage of one of its big names, Maria Sharapova, being in town as the Sony Ericsson Open got underway. The fashion brand and Vogue Magazine celebrated the launch of Sharapova's Spring 2011 Collection for Cole Haan at its store at The Village of Merrick Park in Coral Gables on Tuesday evening. Sharapova made an appearance at the event, where Vogue market stylist Anne Vincent facilitated a Q&A with the tennis star to discuss her collaboration with Cole Haan. Guests also had the chance to win styles from Sharapova's new spring collection, as well as a pair of tickets to the Sony Ericsson tournament.

The Ritz-Carlton Key Biscayne All-Star Charity Tennis Event
Now in its second year, this intimate gathering of tennis fans, media, and the top players from the Sony Ericsson Open took place at The Ritz-Carlton Key Biscayne's Cliff Drysdale Tennis Center on Tuesday from 6 p.m. to 7:15 p.m. Earlier in the afternoon, locals competed in a round-robin tournament to secure a chance to play against or alongside Andy Roddick, Kim Clijsters, Caroline Wozniaki, Guillermo Canas, and Ryan Harrison. Roddick's lively banter with his civilian tennis opponents was a hit with the 150 guests seated in the bleachers. The event also featured a courtside champagne reception with hors d'oeuvres catered, and test drives of new models from event sponor Cadillac. Monies raised by ticket sales were donated to the Greater Miami Tennis and Education Foundation, an inner-city youth program that gives outstanding young players the coaching, mentoring, education, and opportunities they otherwise wouldn’t have. "Last year we raised approximately $5,000, and this year we presented [the foundation] with a check for $13,000," said Ritz-Carlton area director of public relations Michelle Payer. "Our goal is to grow the event every year and put it on the map as one of the great charity events surrounding the Sony Ericsson." 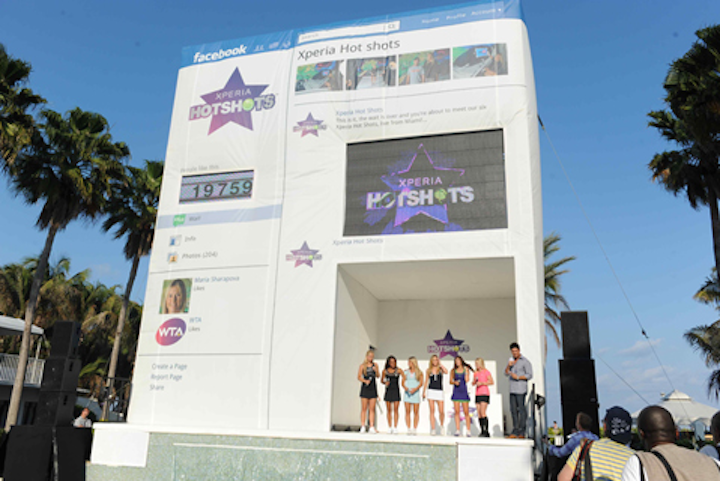 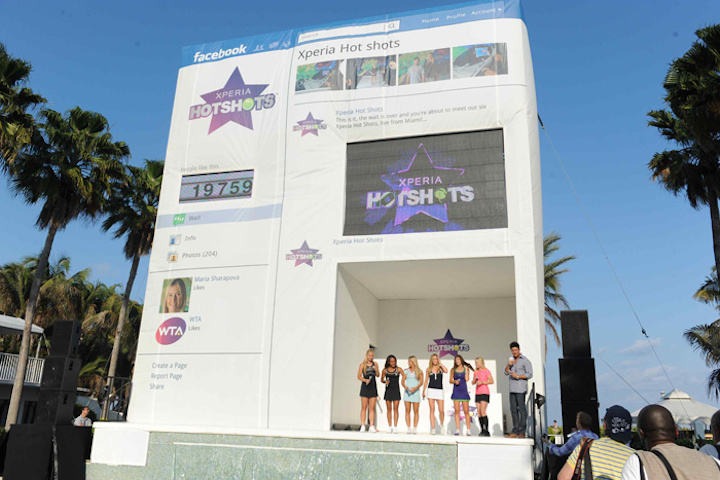 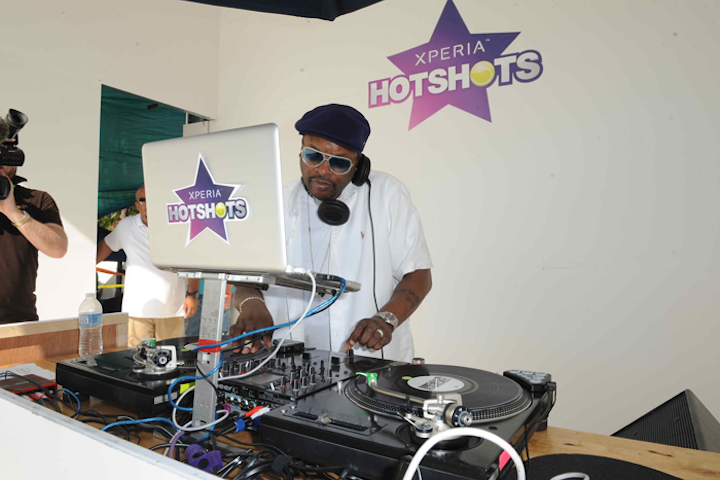 DJ Jazzy Jeff played a 90-minute set after the unveiling of the Xperia Hot Shots stars at the Surfcomber Hotel.
Photo: Courtesy of Sony Ericsson 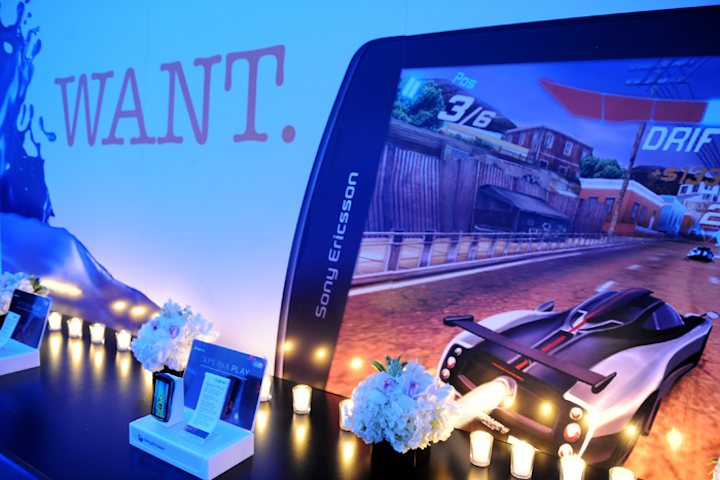 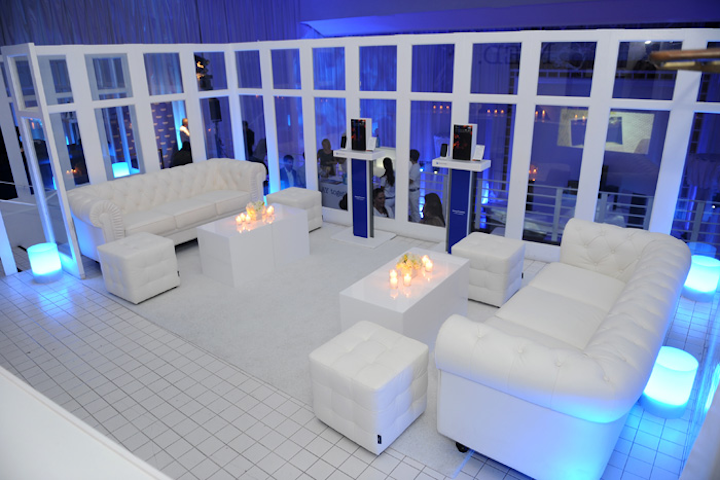 Lighting and fabrication for the Xperia PLAY launch was by SRX Events; furniture was from Lavish Event Rentals. All other decor was handled by Harrison & Shriftman.
Photo: Seth Browarnik/WorldRedEye.com 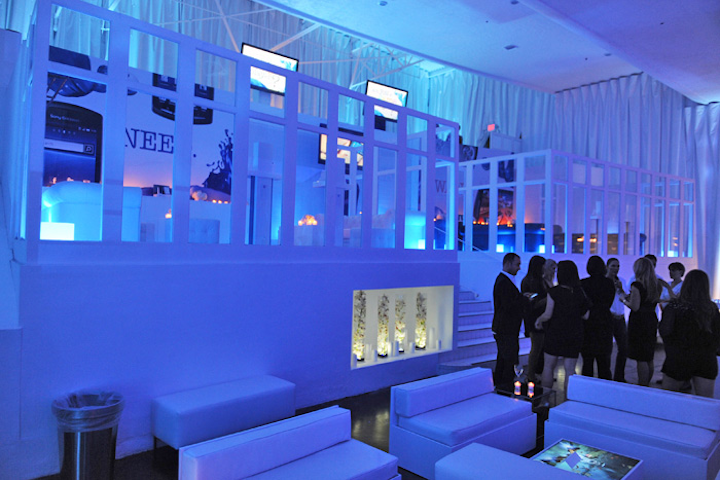 Guests at the V.I.P. launch of the Xperia Play had the opportunity to test-drive the smartphone and its gaming functions.
Photo: Seth Browarnik/WorldRedEye.com 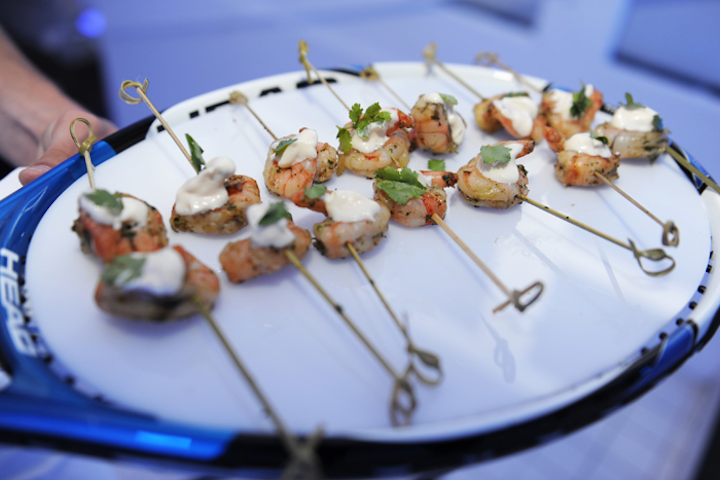 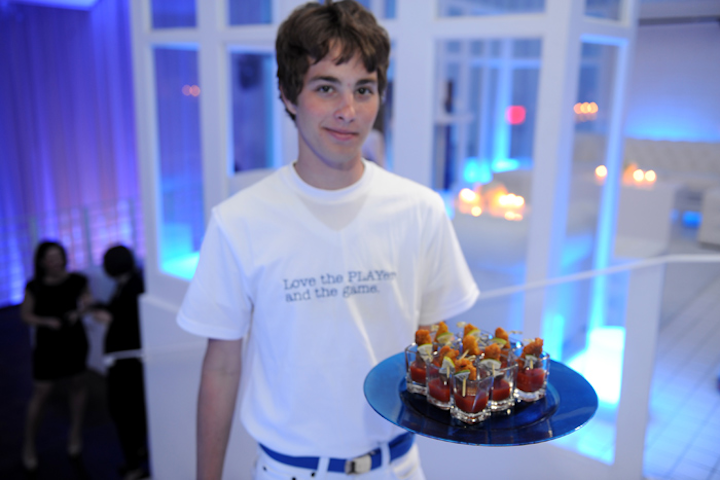 Also on the menu at the Xperia PLAY party were chicken drummettes in a three-mustard barbecue sauce.
Photo: Seth Browarnik/WorldRedEye.com 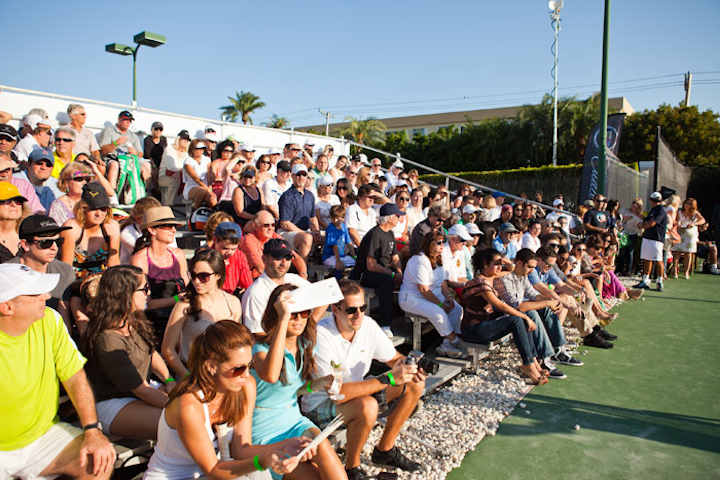 The crowd at the Ritz-Carlton Key Biscayne's Cliff Drysdale Tennis Center included members of the club, as well as locals who competed for a chance to return a serve from one of the tennis stars.
Photo: Stephen Flint 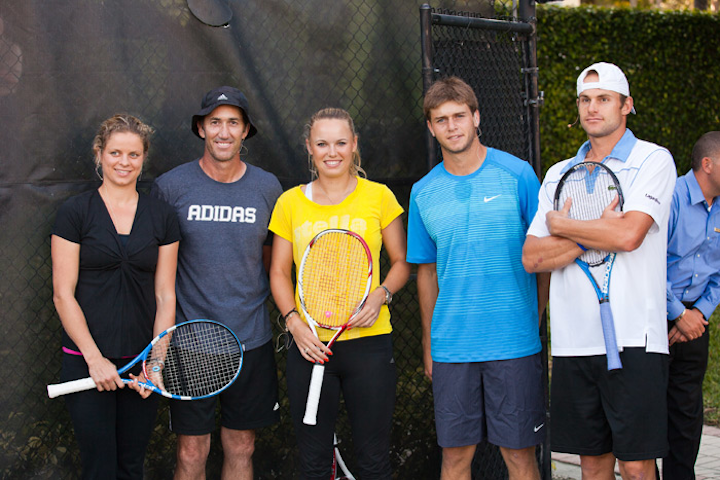 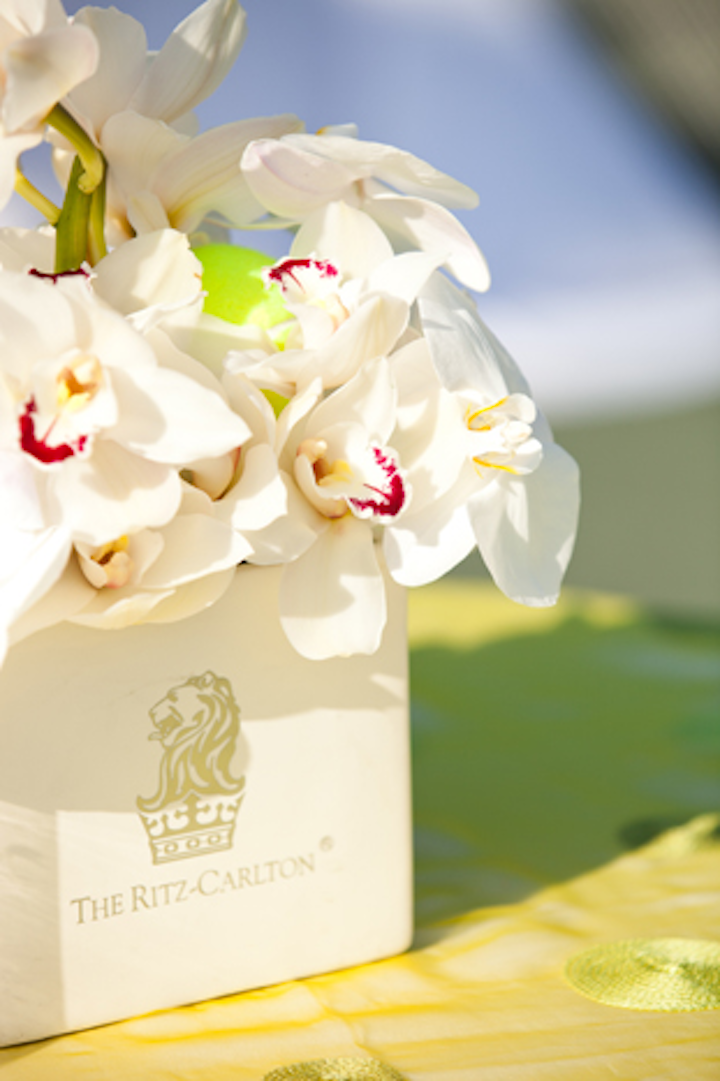 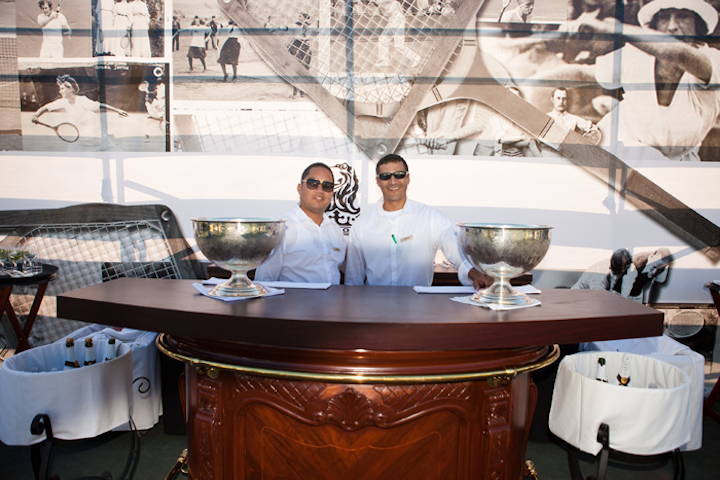 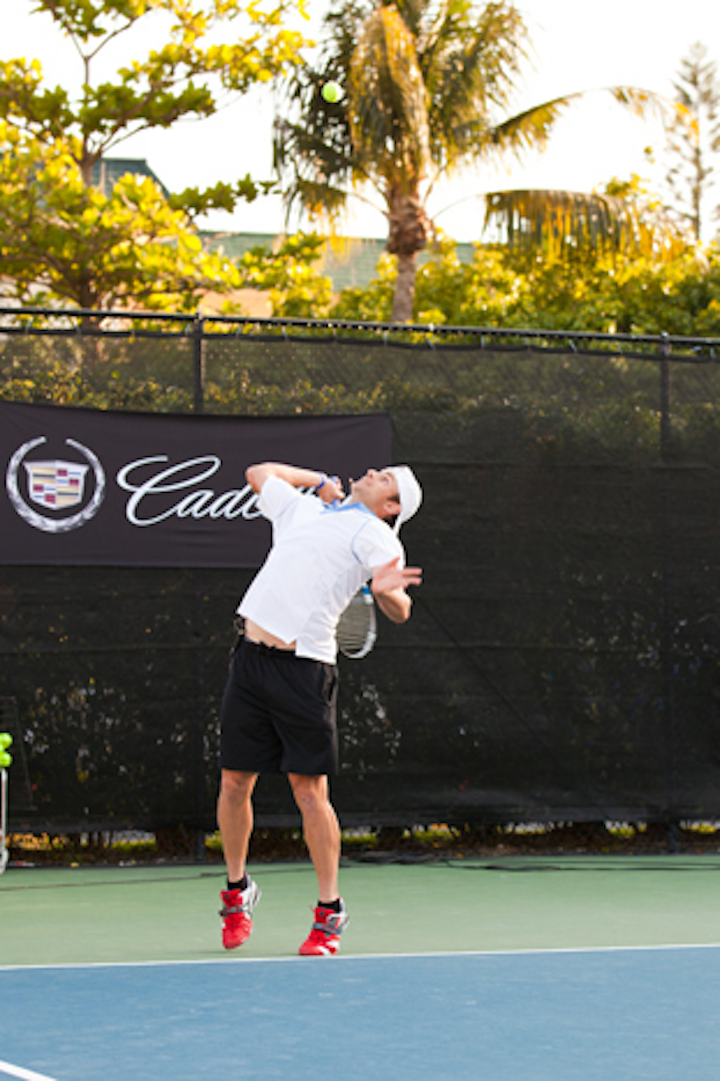 Andy Roddick showed off his serve at the Cliff Drysdale Tennis Center at the Ritz-Carlton Key Biscayne.
Photo: Stephen Flint 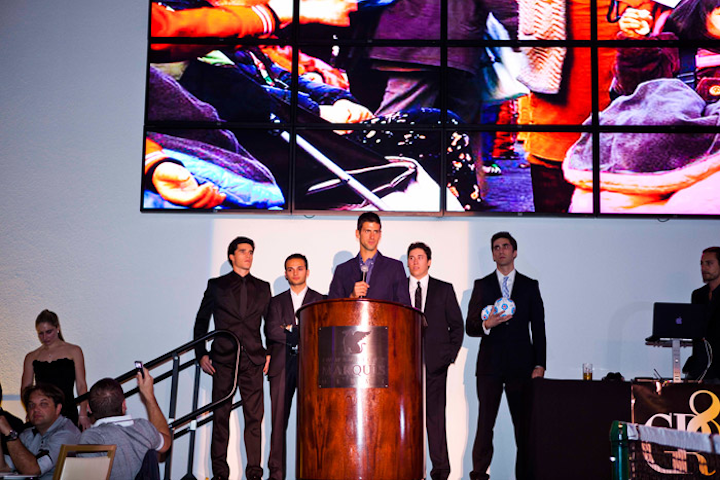 “Since we heard about the earthquake in Japan, I wanted to do something to support the victims,” said tennis star Novak Djokovic at GR8 Miami's fundraiser.
Photo: Humberto Vidal Photo 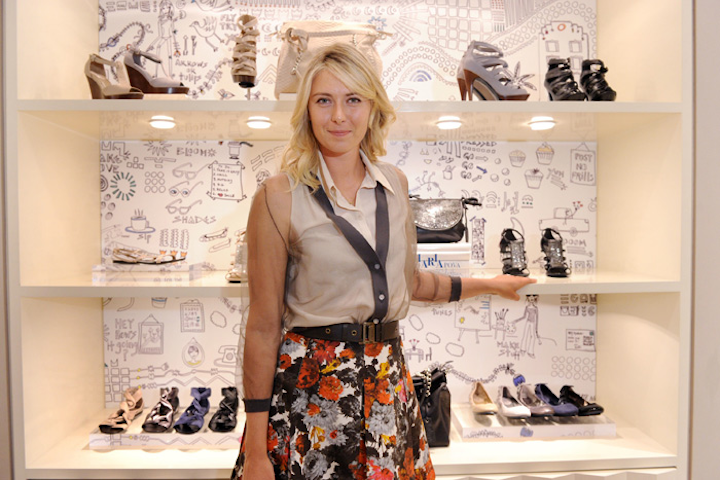 Maria Sharapova was the guest of honor at the launch of her 2011 collection by Cole Haan at The Village of Merrick Park in Coral Gables.
Photo: Seth Browarnik/WorldRedEye.com
More in Miami / South Florida