Art Basel 2018: Events, Parties, and Installations You May Have Missed

This year’s Art Basel in Miami Beach, which took place from December 4 to 8 at the Miami Beach Convention Center, boasted an attendance of 83,000 visitors, collectors, and art enthusiasts, slightly up from the previous year.

"This year marks an exciting new chapter for our Miami Beach show,” explained Noah Horowitz, director Americas of Art Basel. “The now completely renovated and state-of-the-art Miami Beach Convention Center enables us to deliver a fair of the highest caliber and sophistication, opening up unprecedented possibilities. ... The quality of work and presentations by our exhibitors has also never been higher and attendance by private collectors and institutions continues to be strong across all regions.”

The art fair continued to dominate the all-encompassing Miami Art Week, which pushed its neighborhood and thematic boundaries further with a slew of cross-genre events, pop-ups, and satellite fairs.

“It’s a good time to attract some of the art crowd, but we are here till February and it’s really a show for all levels of Banksy and art fans,” said Ford. “A lot [goes into bringing a show overseas]. From persuading the lovely collectors who own the pieces to loan them to us to the logistics of moving such large-scale works around to laying out the show, hanging it, and so on…. It’s an expensive and complex task but we hope worth it once people have seen the show.”

Banky’s criticism and detachment from the unauthorized exhibit added a layer of intrigue. The enigmatic artist broke ties with the show’s founder Steve Lazarides years ago and denounced anyone who charged to see his work; adult admission to the Art of Banksy show ranges from $32.49 to $39.99. When asked about the criticism, Ford reiterated the expense of creating such an experience. “As I mentioned, it’s not cheap to stage these shows. And until museums start staging shows of his work for people to see for free, I can assure you the show has been put together with the very best intentions as I’m a major Banksy fan myself.”

This year, Bacardi and the Dean Collection’s No Commission moved to the Faena Forum with photography-theme programming. Bombay Sapphire’s Artisan Series rang in its ninth year at the Villa Casa Casuarina, formerly known as the Versace Mansion. Red Bull, in collaboration with the Looking Up Arts Foundation, revealed a 30-foot-tall climbable "Rainbow Bridge" inspired by Pac-Man at Wynwood’s new Hive pop-up space.

Citi returned as the Wynwood Walls’ presenting sponsor, unveiling new murals as part of its “Beyond Words” exhibit. The brand also curated Miami’s Citi Bike program with works by Queen Andrea painted on 600 bikes and bike stations. “At Citi, we’re thrilled to return as a sponsor of the incredible Wynwood Walls Art Basel Program,” said Mindy Mercaldo, managing director for Citibank's Central Southeast region. “Vibrant, diverse, and international, it is a true reflection of Miami, one of our most important markets.”

Click through to see more of Miami Art Week’s notable events and exhibitions. 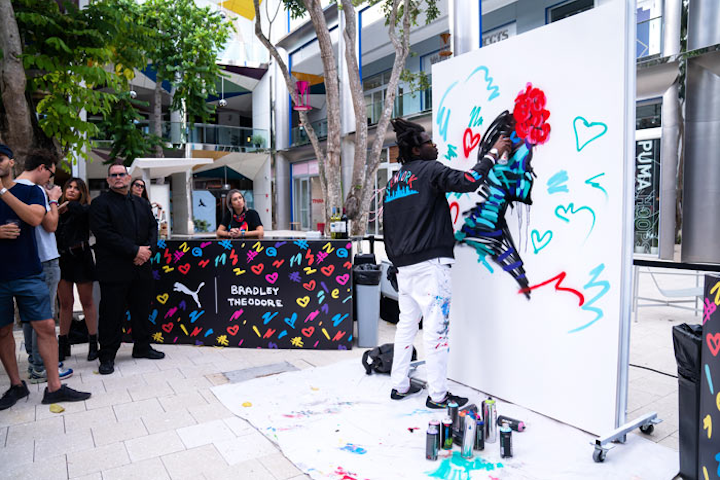 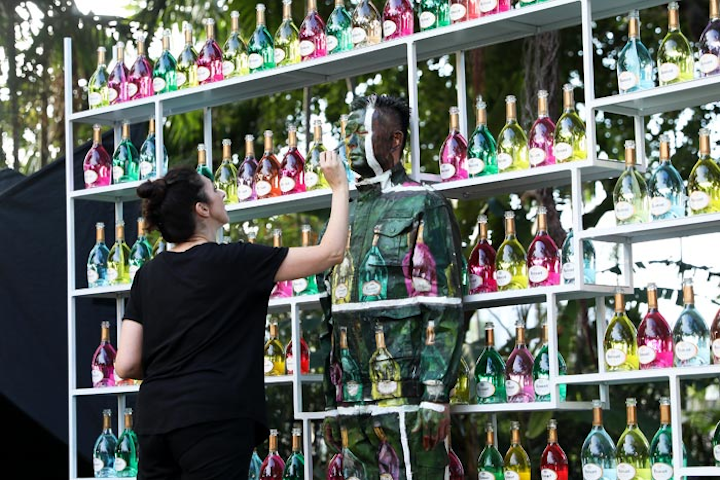 Ruinart Champagne transformed the Miami Beach Botanical Gardens on December 5 into an artistic space thanks to Liu Bolin, known as “the Invisible Man.” During the event, the artist was live painted and camouflaged into a colorful large-scale installation of Ruinart’s rounded bottles. 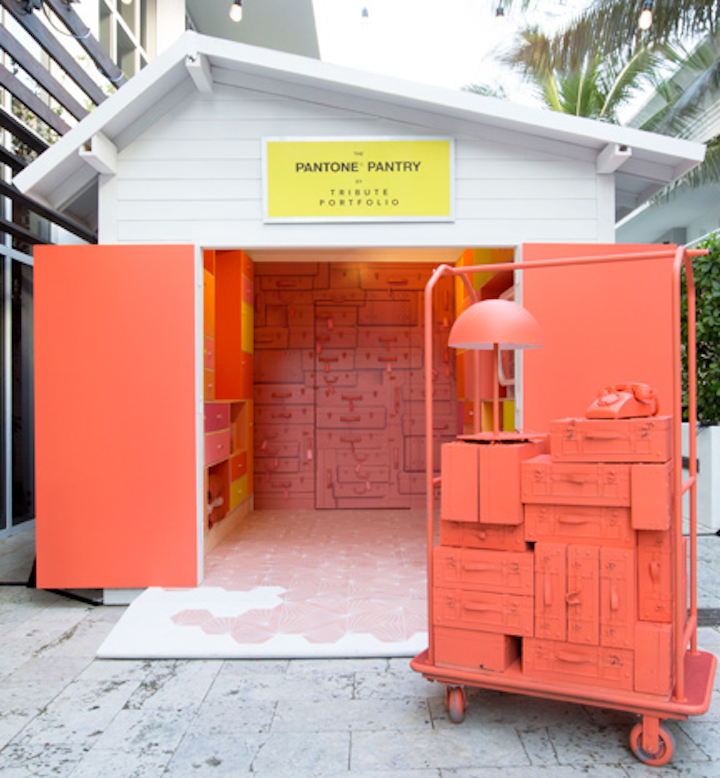 Tribute Portfolio, Marriott International’s newest collection of independent hotels, debuted the “Pantone Pantry by Tribute Portfolio” at the Royal Palm South Beach Resort. The travel-inspired installation highlighted “Living Coral,” the 2019 Pantone Color of the Year. The Miami showcase came to life via interior designer Athena Calderone, Supergroup LSD, and pop-art illustrator Gabriel Alcala. The activation included 20-plus cabinets and drawers throughout the space, as well as an infinity mirror aquarium and a surprise confetti cabinet. Guests were immersed in the color with projection artwork from LSD. 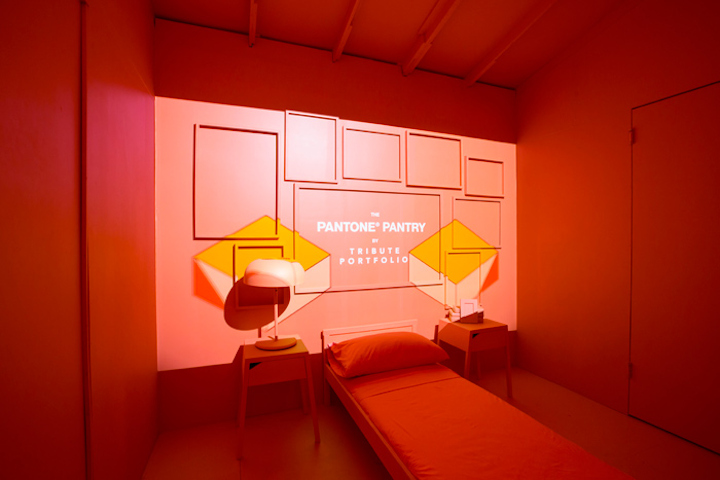 The Pantone Pantry marks the first time that Pantone has executed an experiential reveal moment for its Color of the Year announcement in front of a live audience. The pantry doors opened to reveal Living Coral and the associated Shimmering Sunset palette. A private reception took place December 5 and the space was open to the public December 6 and 7. 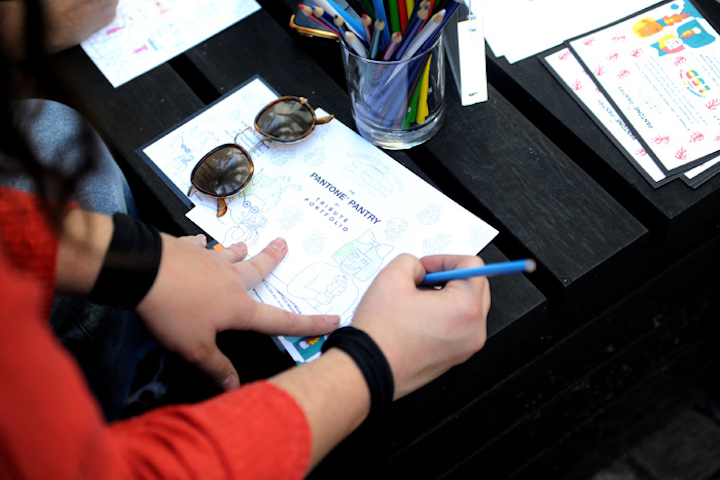 Guests received coloring book postcards featuring the same mural artwork that adorned the exterior of the pantry, with illustrations of Labrinth, Sia, and Diplo. BMF Media was responsible for the structural fabrication, custom decor sourcing and styling, graphic design and production, and overall experience design.

25 Years of What Goes Around Comes Around

To celebrate its 25th anniversary, luxury vintage retailer What Goes Around Comes Around took over the Versace Mansion with a retrospective installation featuring iconic archival pieces from Gianni Versace on December 8.

25 Years of What Goes Around Comes Around 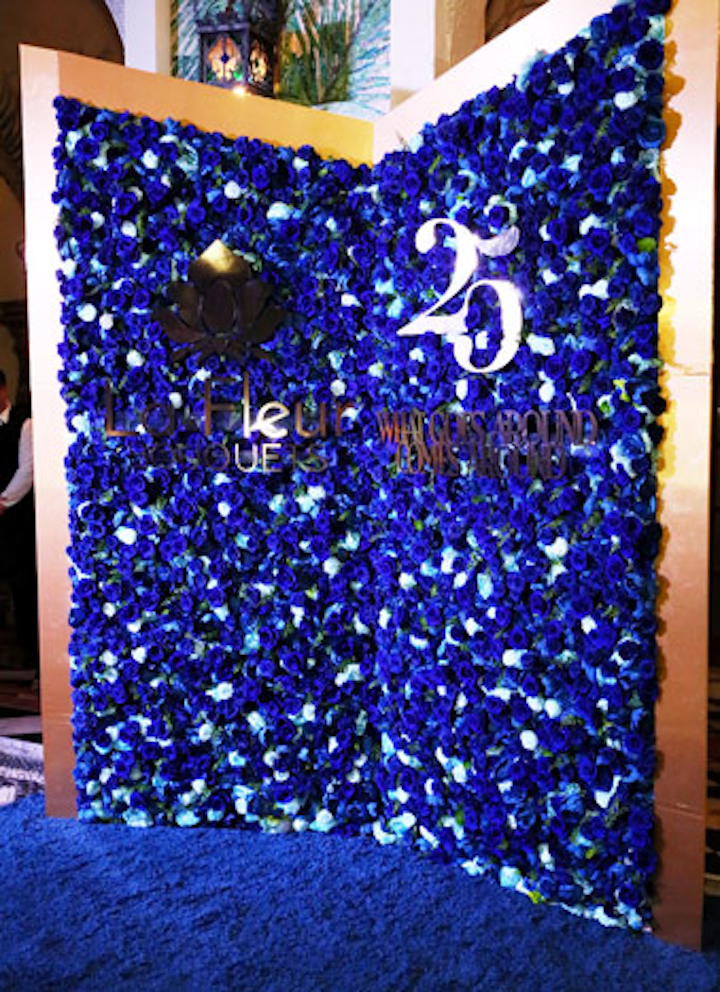 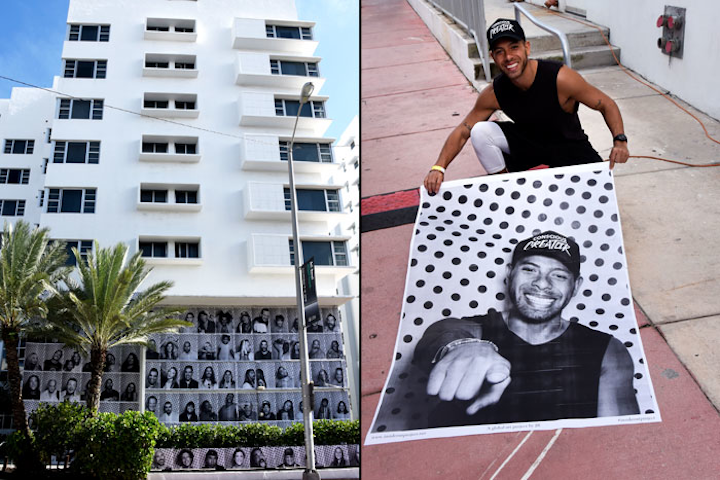 French artist JR brought the Inside Out Project to the Confidante Miami Beach, also home of Montauk’s Surf Lodge pop-up. A thousand people visited “Odette,” the Inside Out photo booth truck, to have their photo taken and join the face-laden installation.

The Art of Banksy 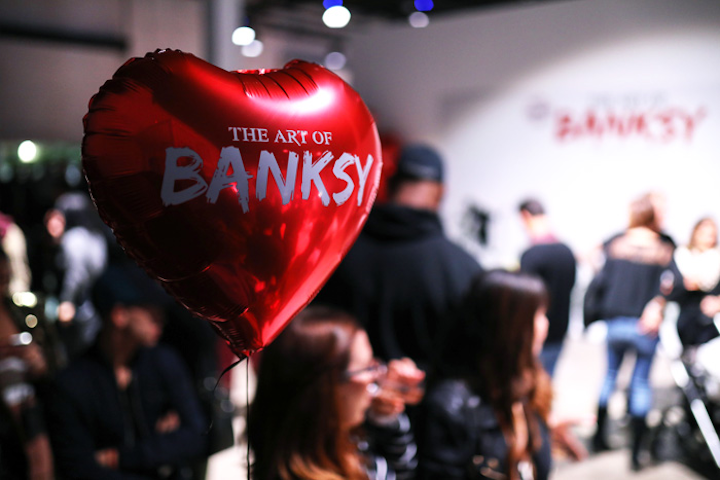 “The Art of Banksy, Unauthorized Private Collection” brought its international tour to Miami for its first foray into the U.S. market, bringing 80 original pieces to Little River’s Magic City Studios. The exhibit runs until February 28. 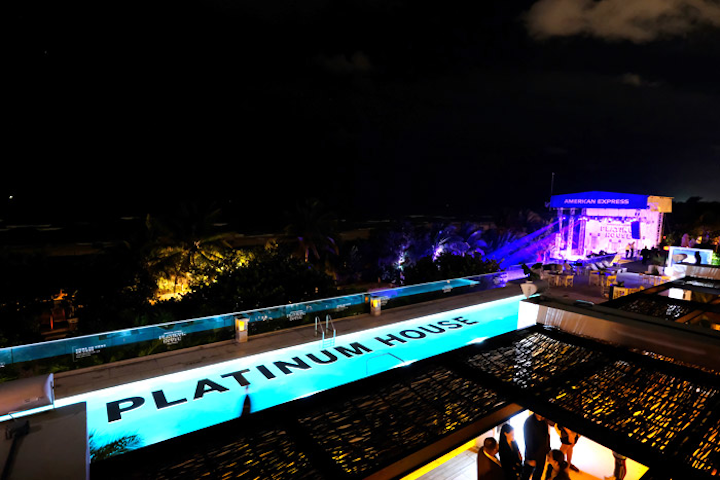 American Express presented the second Art Basel iteration of its Platinum House at the 1 Hotel South Beach from December 6-8. 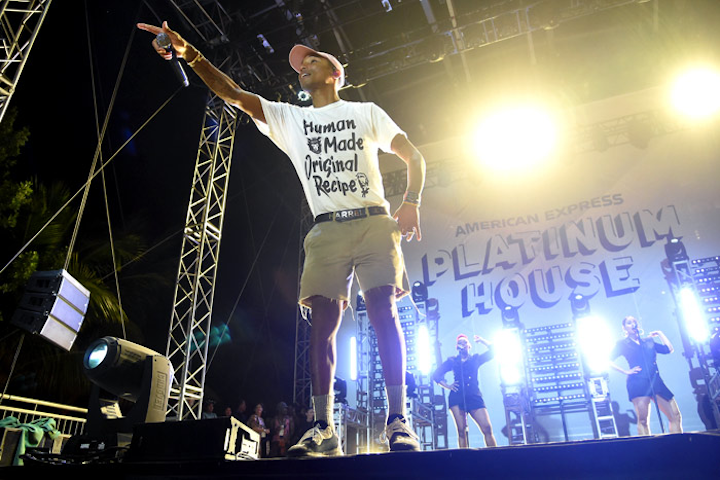 Events included a Pharrell concert, a dinner by chef Michael Solomonov of Zahav, and networking events. 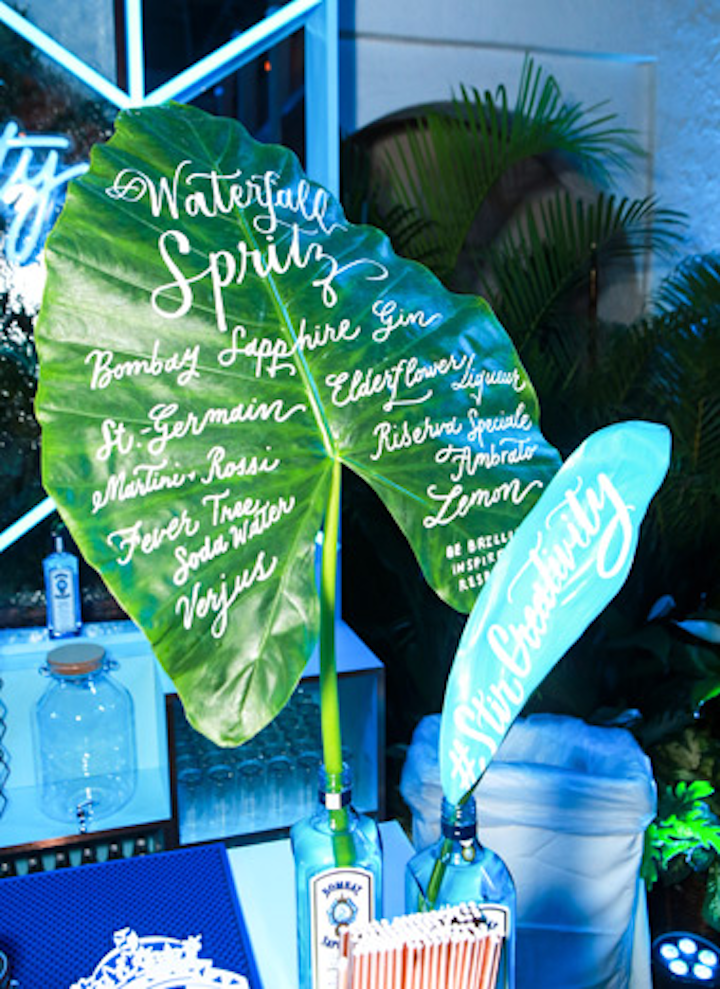 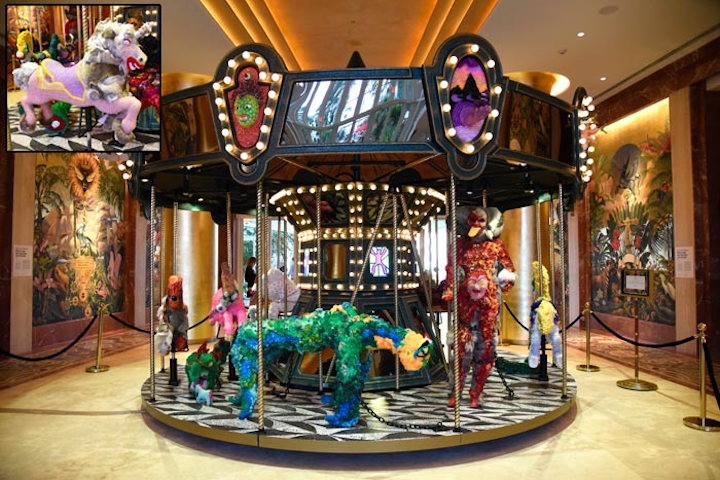 Artist Raul de Nieves revealed a life-size, fully functioning carousel at the Faena Hotel. The elaborate piece, which was an existing merry-go-round from the 1950s found in Brooklyn, was commissioned by the Art Production Fund and Bulgari, and stands 16 feet wide with glittering animals.

Bacardi and the Dean Collection present No Commission: Miami 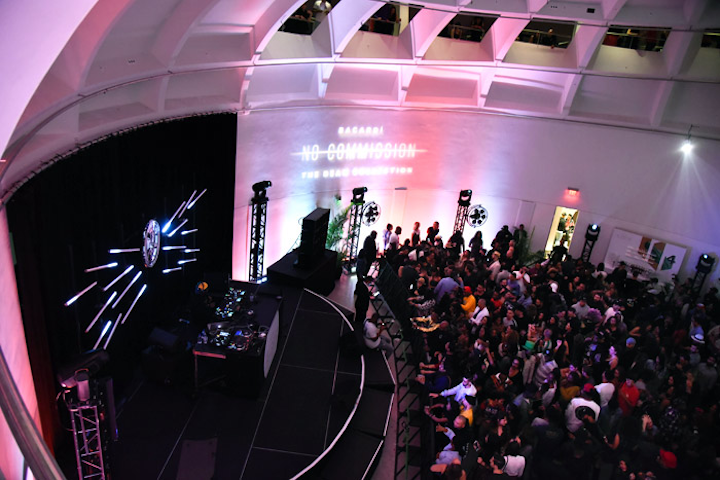 Now in its second year, Bacardi and the Dean Collection's No Commission moved to the Faena Forum with photography-theme programming. Artists were given exhibition space for free, earning 100 percent of their sales. Host Swizz Beatz, along with Black Coffee, Meek Mill, ASAP Ferg, Busta Rhymes, Fat Joe, DJ Nasty, and Eli Fola performed on December 6 and 7. 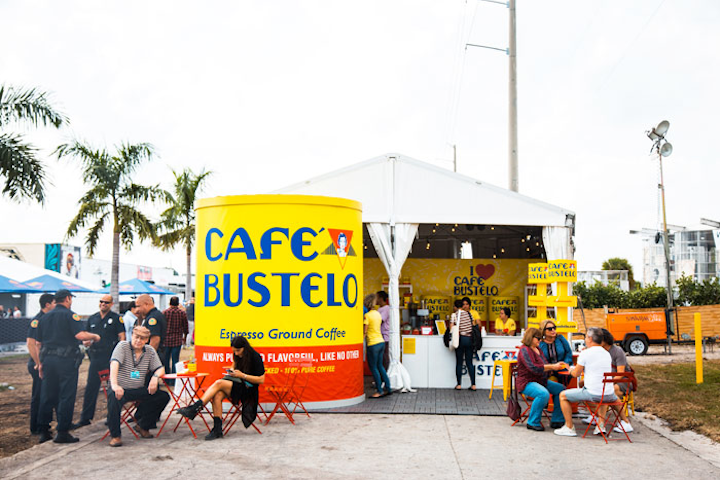 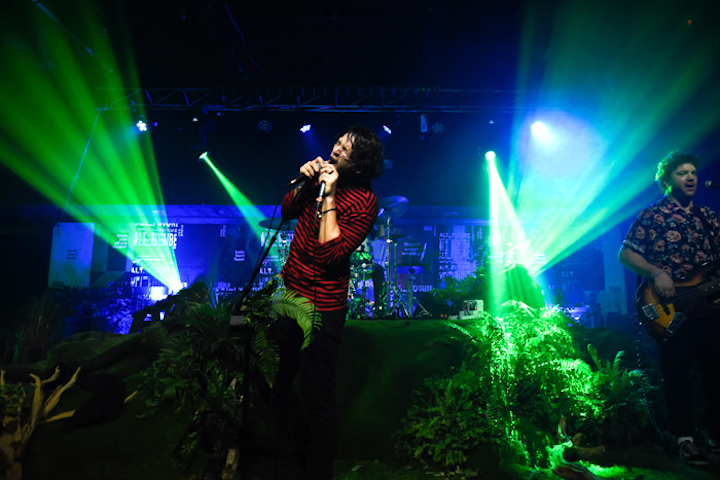 A collective of creators in the Interactive Art Movement created a multi-sensory experience in a two-story abandoned department store in downtown Miami. The five-day immersive pop-up featured 80 performance artists and musicians, as well as a dystopian nightclub called ALT_Future.