The Hamptons art center once again brought unusual installations and performances to its summer benefit—this year under the thematic umbrella of "Devil's Heaven."

Growing up in a Waco, Texas, during the 1940s, avant-gardist Robert Wilson—a pillar of the experimental art world and founder of the Watermill Center—had never met an artist. "When I was 12 years old, I met Clementine Hunter and bought a painting of hers," Wilson said. "Her work has always inspired me. For our 20th anniversary gala I thought to honor her."

In celebration of the Watermill Center summer benefit's two decades of history on Saturday night, Wilson staged an homage to Hunter, bringing to life the self-taught African American folk artist's body of work—but in a very Watermill way. True to his word ("We always try to do what no one else is doing."), Wilson transformed a Hunter canvas of red and white angels flying over a field of green into this year's theme: "Devil's Heaven."

"For me, 'Devil's Heaven' is about two worlds being one," Wilson said. "Heaven and hell exist together."

Setting a heavenly scene, the white dinner tent and tables created a canvas for streaks of colorful cloth runners, each dotted with miniature reproductions of Hunter canvases. A four-sided installation at the center of the tent recreated certain works, including "Cotton Pickin'" and "Arc en Ciel"—Angels and Rainbow, adorned with 3-D elements like arms and wings. For dinner, Canard served a "devil's garden" salad made, fittingly, with baby heads of lettuce, followed by a roasted hen stuffed with summer fruits and brioche. Bacardi, Mouton Rothschild, and Peroni provided the bar.

Outside the tent, a fiendish spectacle ran wild. Arriving guests were greeted by Trina Merry's installation of two performers perched on a pedestal, their naked bodies painted green and flowering with magnolia branches. That proved to be only the first of many nude works by Merry, including an enchanted forest of performers painted to look like bark and pressing their nymph-like flesh against trees. Merry's "Objectified" conversely presented painted bodies as man-made items, like chairs, lamps, and ironing boards. Then there was Lisa Lozano's "Funérailles de Miel," in which patrons were encouraged to spoon honey out of a box where a female performer lay nude, half-submerged in sticky sweetness.

At the center of it all was a recreation of Hunter's African House, a wide-roofed structure on the Louisiana plantation where Hunter worked, which featured prominently in her autobiographical art. "She is someone who never learned to read or write, but she has documented life through pictures," Wilson said. "Many of my early works were silent and told stories through pictures, so I feel close to Clementine Hunter's work."

Looking back on 20 years of Watermill's annual Hamptons fund-raiser, Wilson judged Saturday evening's success by the swell in attendance since 1994. "At the first benefit, Donna Karan chaired; we had 120 people," he said. "This past Saturday we had 1,200." One of those people, asked in passing how this year's benefit compared to the year prior, put it more succinctly: "Well, it isn't raining." 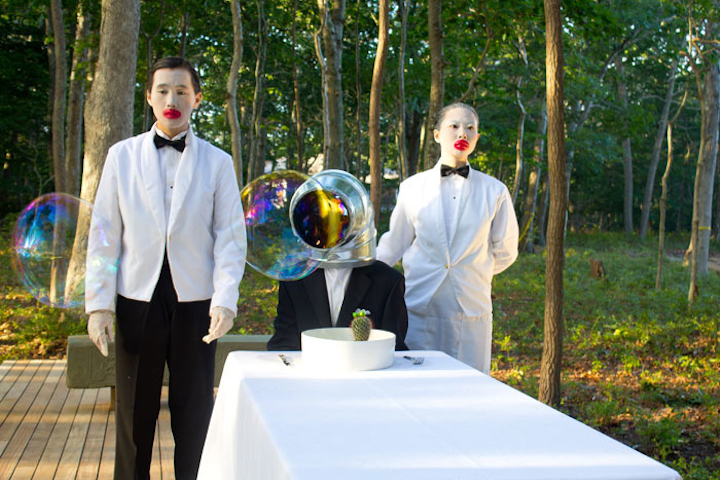 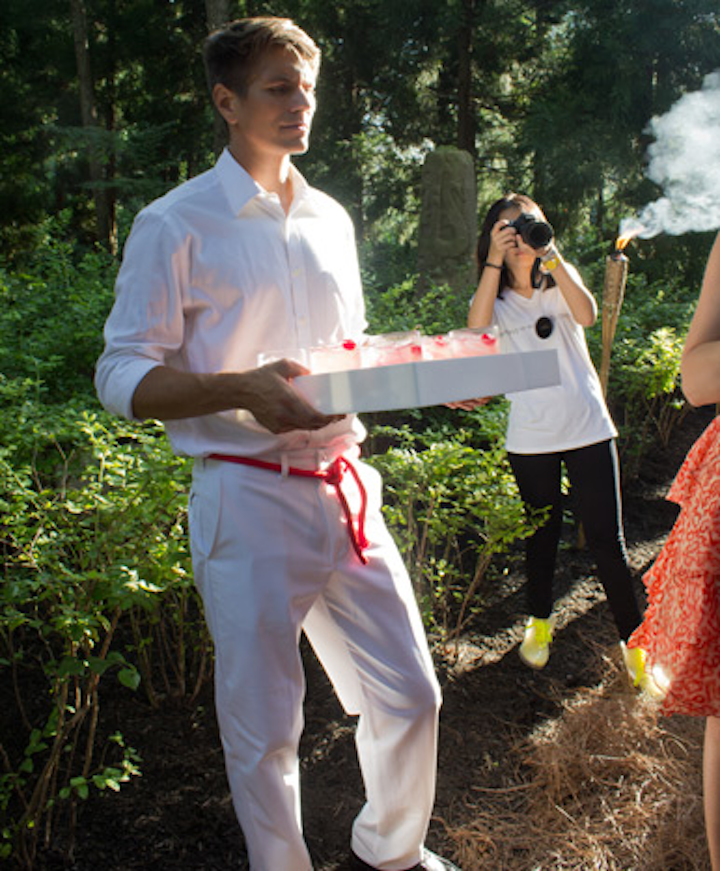 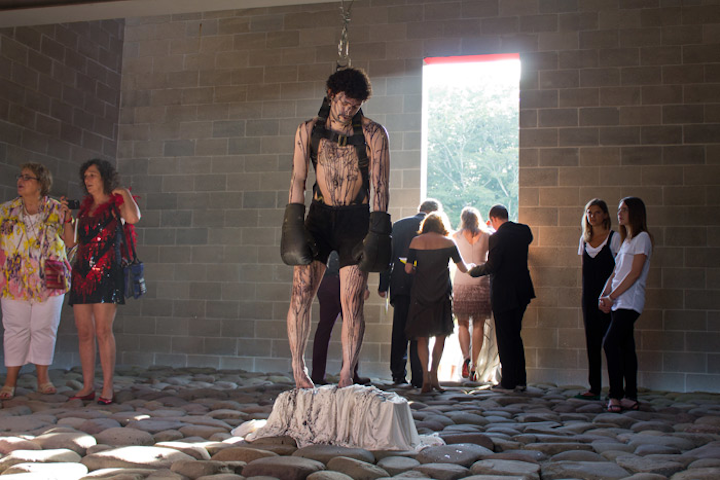 Patrons encountered two challenges as they passed through the center’s rocky entryway: a tricky terrain for heeled footwear and the sight of a human punching bag in artist Carl Lawrence's installation "Remembrance."
Photo: Nadia Chaudhury/BizBash 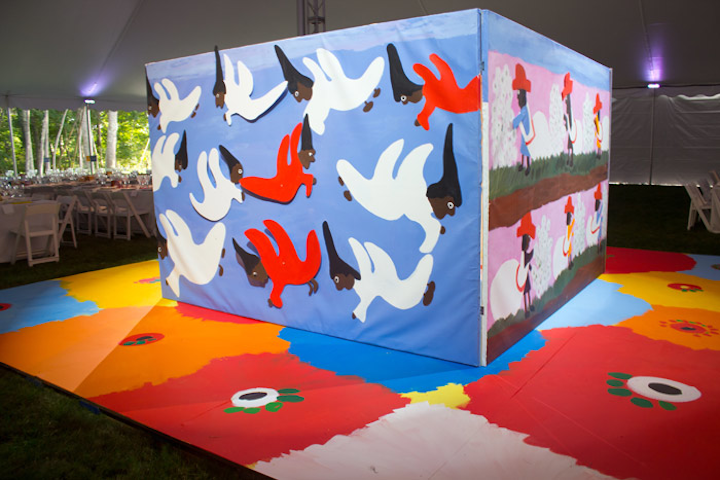 Following the cocktail reception, 700 guests descended into a large white tent erected on the center's lower terrace. More than 50 tables—each starting at $15,000—filled the space, which was dominated by a central installation of canvases emulating the vibrant work of Clementine Hunter.
Photo: Nadia Chaudhury/BizBash 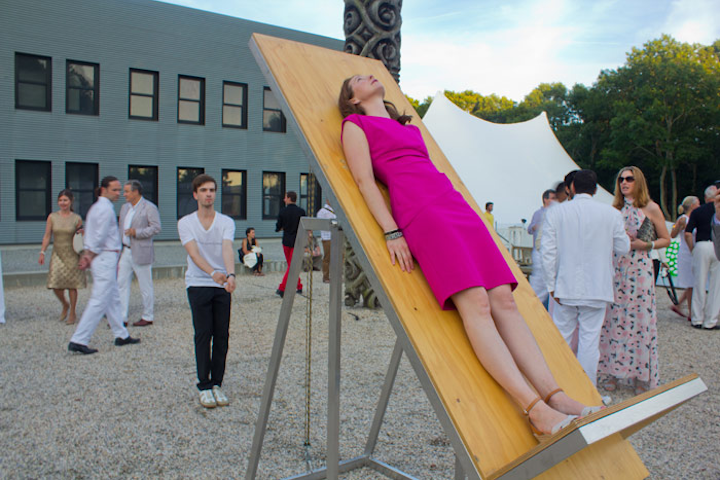 Robert Wilson's "Stargazer Beds" offered a counterbalance to more nefarious pieces by scattering pulley-operated planks around the main terrace for guests to be lowered backward, their eyes toward heaven.
Photo: Nadia Chaudhury/BizBash 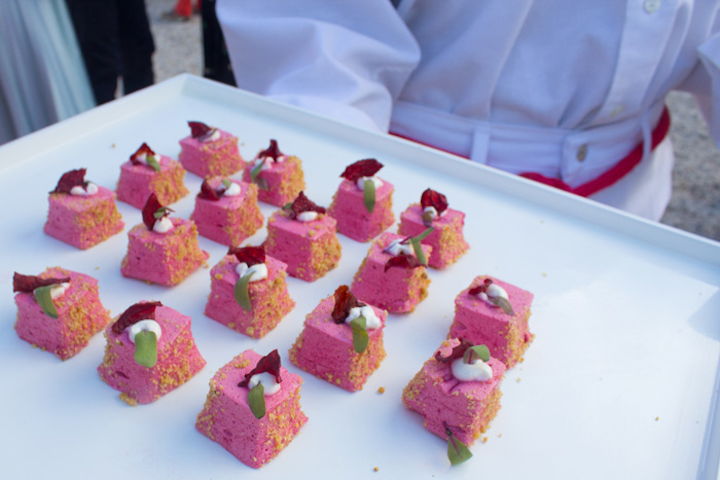 Known as the devil's preferred hue, red featured heavily throughout the space—from watermelon and beet hors d'oeuvres (pictured) to performance costumes to a band of fabric running up the center's front façade for the Hope Esser installation "Telegraph Process."
Photo: Nadia Chaudhury/BizBash 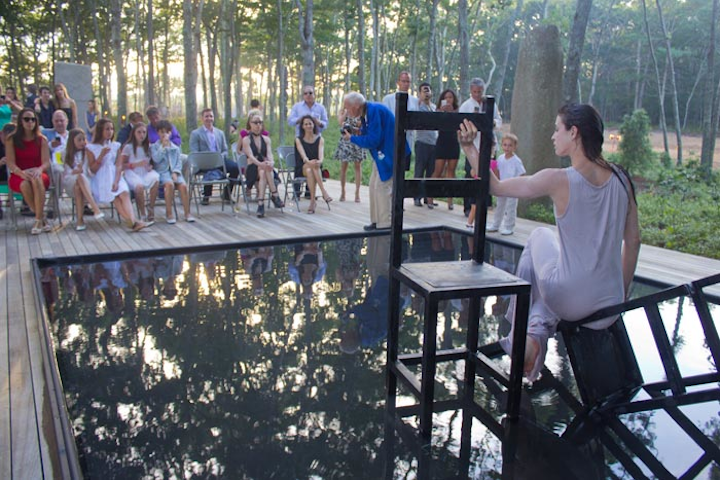 Fashion photographer Bill Cunningham of The New York Times snapped shots of patrons as they ventured from one installation to the next on Watermill’s 8.5-acre campus, a procession that concluded with a performer balancing between two wooden chairs over a shallow pool in Evangelia Rantou's "Solo With Chairs from Medea(2)."
Photo: Nadia Chaudhury/BizBash 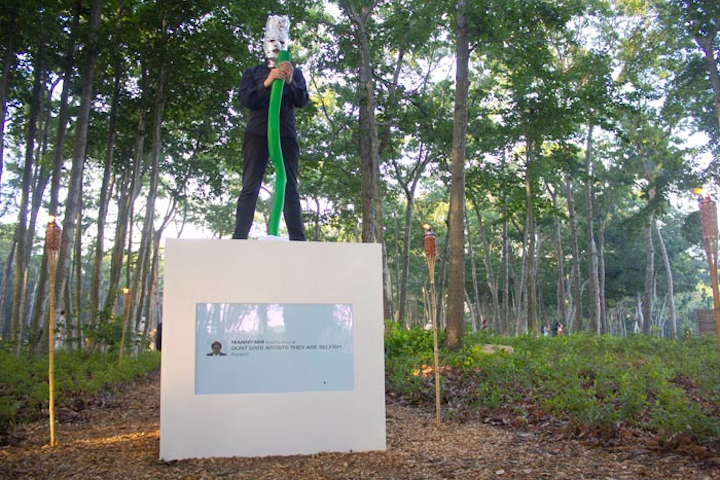 Bringing a bit of digital into the natural world, artist Jörg Brinkmann posed a performer atop a large white box that flashed tweets from the likes of Justin Bieber and the Dalai Lama each time he lowered a crooked green stick in "The Tweeting Stick."
Photo: Nadia Chaudhury/BizBash 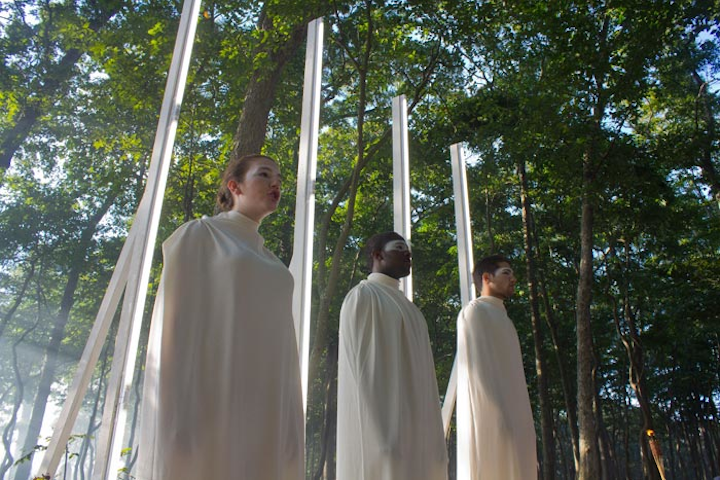 For "Amnesia" by Dilek Acay, six performers—three male, three female—stood like columns on either side of a wooded path, draped in white fabric from the neck down and hurling staccato, gibberish-y words at each other as guests walked in between.
Photo: Nadia Chaudhury/BizBash 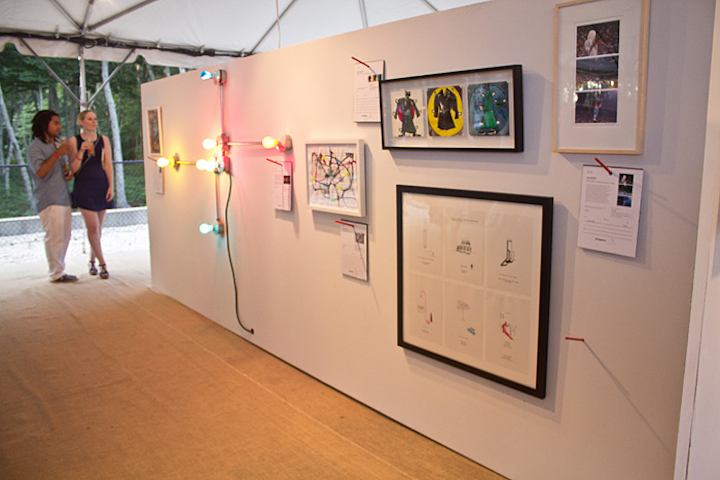 Throughout the night, guests were able to bid on items listed in the silent auction, including G.T. Pellizzi's "Conduits in Red Yellow and Blue (Figure 26)," which combined lightbulbs, porcelain lamp holders, galvanized steel, and wire.
Photo: Nadia Chaudhury/BizBash 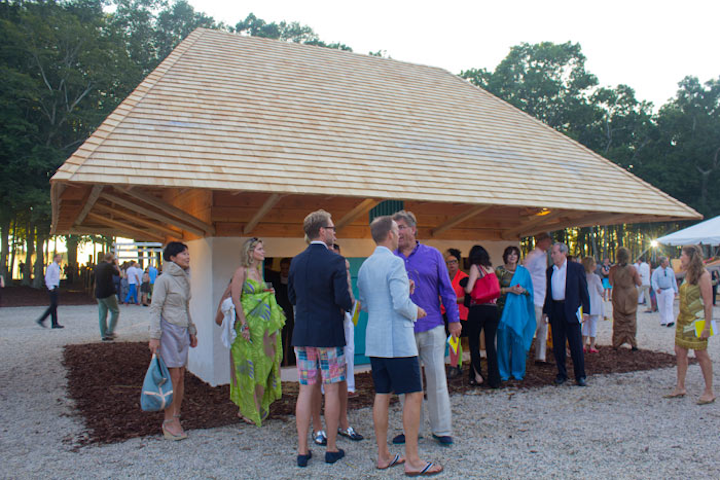