The arctic temperatures and heavy snow did little to stop February Fashion Week in New York, with designers once again showcasing their collections in unexpected ways.

Despite news that Mercedes-Benz Fashion Week would be losing its title sponsor and vacating Lincoln Center following February's week of shows in New York, designers rallied on, delivering not only a strong overall season, but solid show sets to match. Whether it was Valentine’s Day or the Chinese New Year celebration, brands as diverse as Moncler Grenoble, Diane von Furstenberg, and Marc Jacobs all cozied up to red as their go-to color scheme for show backdrops. Others, including Kanye West for Adidas and Jason Wu for Hugo Boss, maintained a minimalistic stream of thought, while Thom Browne continued to march to his own beat.

For Monique Lhuillier, who showed for the last time at the tents at Lincoln Center, the decision to cut her seating in half made a strong statement—as did her fabulous show, which went off with a bang—leaving little doubt that the future of Fashion Week in New York (regardless of where its new home will be) is intact and in fine spirits. 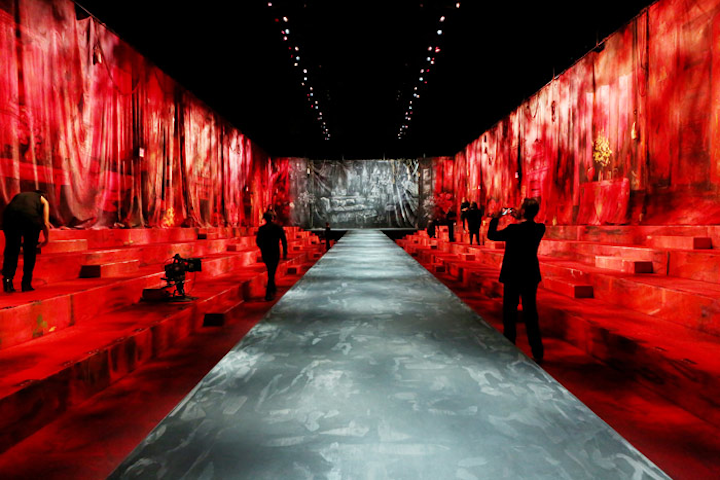 Nearly 10,000 square feet of original artwork was painted, by Oliphant Studios, onto the 19 24-foot-high fabric theatrical drops that surrounded the dramatic Marc Jacobs show backdrop and surround. The February 19 show, produced by KCD at the Park Avenue Armory, was a sensual recreation of Diana Vreeland's "Red Room" living room, as inspired by a "Garden in Hell" Jeremiah Goodman painting seen by Jacobs. The space measured 158 by 50 feet, with runway, stage, and seats all hand-painted to match. (Some 700 guests sat in Vreeland's "living room" while models emerged from a gray version of the same room). "Marc loved the idea of a trompe-l'oeil interior," said set designer Stefan Beckman, who had less than 48 hours to transform the venue following the Tommy Hilfiger show. 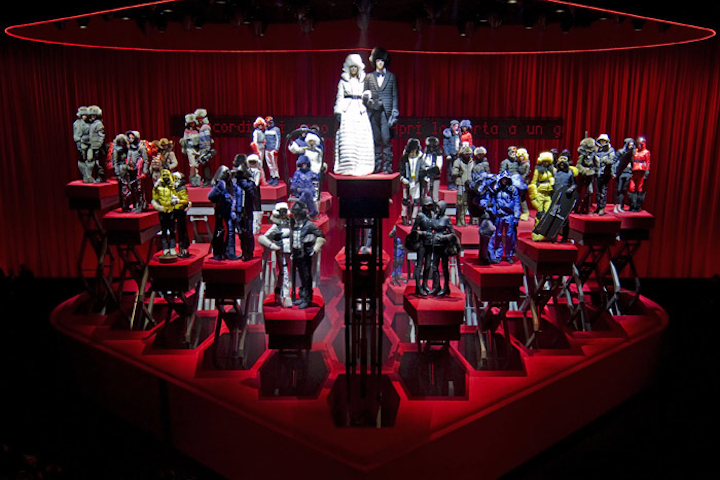 Fittingly, given that its show fell on Valentine's Day, Moncler Grenoble deemed its fall spectacle a "Love Factory." Moving the show out of Manhattan to the Duggal Greenhouse at the Brooklyn Navy Yard, Villa Eugenie created a macroscopic tongue-in-cheek chocolate box from which models emerged in pairs as couples, kissing during the presentation—much to the audience's delight. Centering the show was a young bride and groom dressed in Moncler-meets-matrimony ensembles. 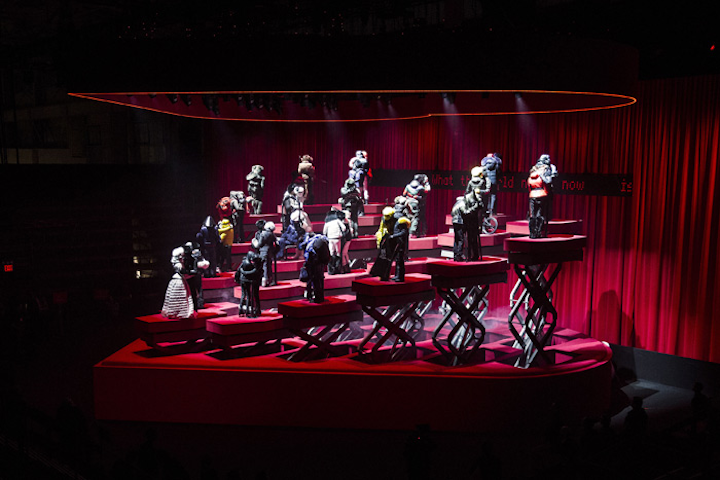 Utilizing a timed hydraulic system, organizers propelled each couple, portraying a different winter sport discipline, via a dedicated piston—all the while ensuring the overarching formation of a heart was uninterrupted. The show was set to "Hymne à l'amour," a popular love song originally performed by Edith Piaf. 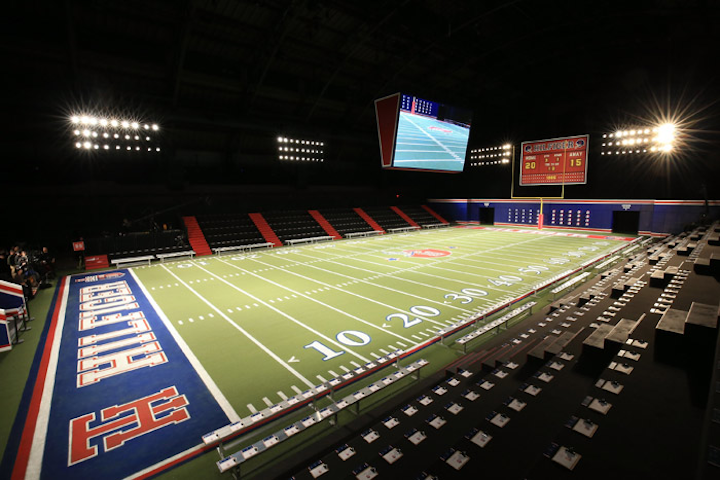 Clearly still on a high from the New England Patriots' Super Bowl win, Tommy Hilfiger threw the be-all and end-all of fashion-meets-football shows with his February 16 extravaganza at the Park Avenue Armory. Designed by Randall Peacock, the KCD-produced event included a 13,000-square-foot heritage football field boasting two authentic goalposts, turf painting, a scoreboard, and a back wall covered in custom-made crush mats that housed 900 fans (er, editors) seated on steep elevated bleacher-style benches. It took two 12-hour overnight shifts of 14 scenic painters to create the hand-painted graphics on the turf. JKLD Lighting Design provided the Friday Night Lights feel inside the space, and a Jumbotron was installed to build pre-game excitement as it was live streamed worldwide. The entire show was built in four days and removed within seven hours in time for the Marc Jacobs team to load in. 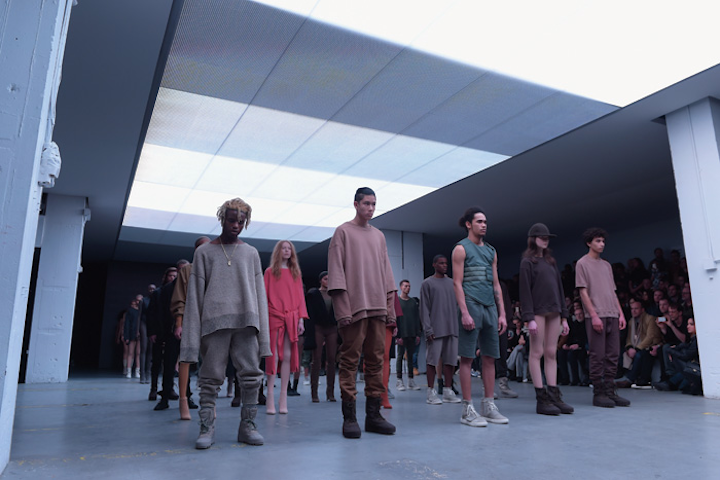 Held on February 12 at Skylight Clarkson Square, Kanye West's debut runway show for his Adidas collaboration was simple, stark, and straightforward. Like with Ralph Lauren, who also shows in that venue, show producer Villa Eugenie built a space within a space, using only about one-fifth of Studio III. The bleachers and risers, which served as guest seating, were color-matched to the gray of the floor. Word has it the runway was meant to also double as a concert stage for a surprise performance between West and guest Rihanna, but that did not come to fruition. 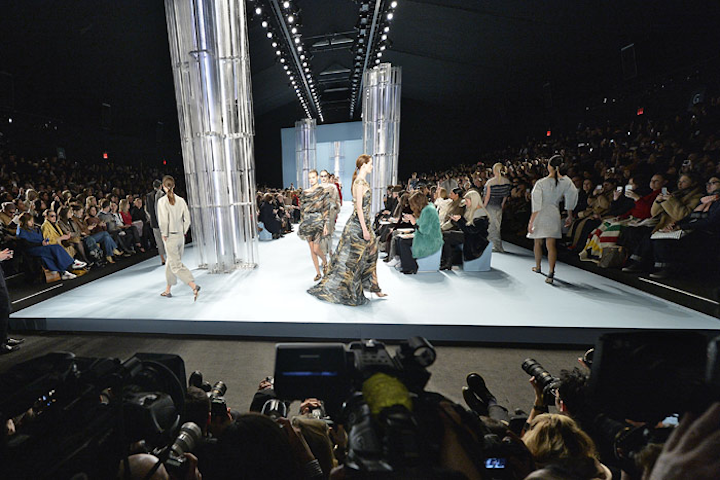 Last season's all-white venue at the tents at Lincoln Center was replaced by one that portrayed a "calm elegance," as effused by Carolina Herrera's fall collection. In keeping with the themes of water and all things fluid, AO Production erected three large convex 18- by 4-foot Plexiglas columns that seemed to sprout from the runway organically, with half of a column placed as the backdrop—all lit from within via fluorescent light tubes. The runway itself was, once again, elevated, but sheathed in a pale pastel blue, as were the on-runway seats, to complement the collection's cool palette of gradient tones. 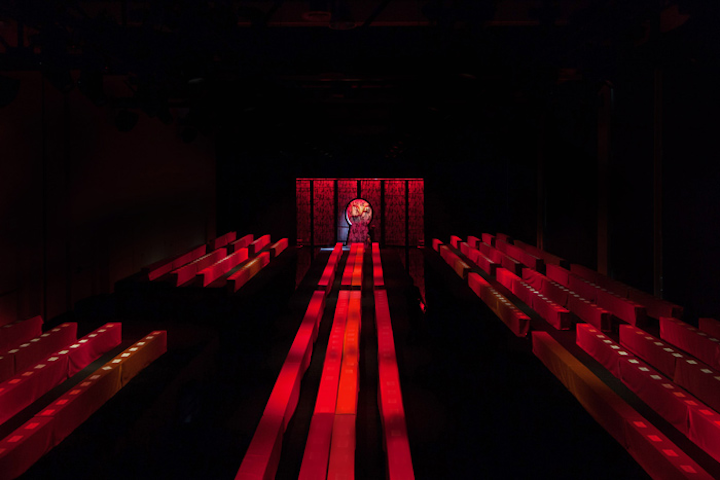 Diane von Furstenberg went dark for fall, enlisting Bureau Betak to create a set for her February 15 show at Spring Studios that was moody and reflective of the collection's boudoir-esque feel. "By day she commands her world; by night she inspires fantasy," is how the designer put it. Translated, most saw some sort of Fifty Shades of Grey meets, thanks to the large doses of red, a Chinese New Year celebration, all wrapped into one. 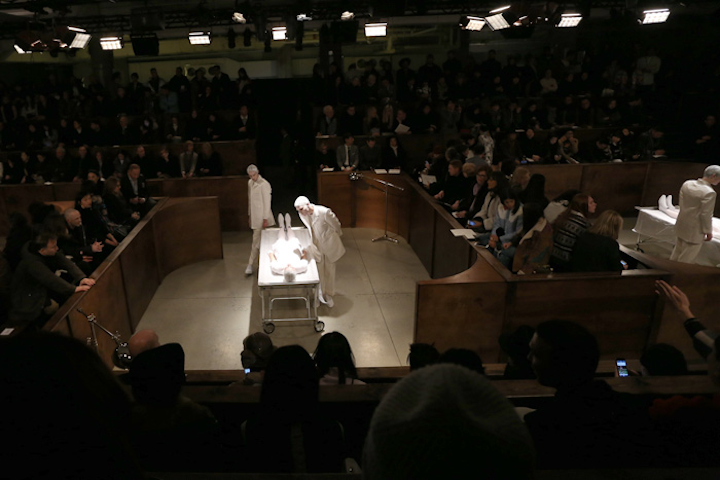 The February 16 show, held at Skylight Modern and once again produced by Villa Eugenie, highlighted the spectacle that is, well, mourning. The all-black show comprising 40 outfits was set around a medical amphitheater, and guests sat on custom stadium-style pews built by Brooklyn-based 4x8 Workshop. The old-fashioned, wood-paneled theater, reminiscent of the 18th century, featured young women, clad in white, on gurneys during preshow arrivals. As snow started to fall, the "doctors" surrounding the patients removed their medical coats, signaling the start of the show. 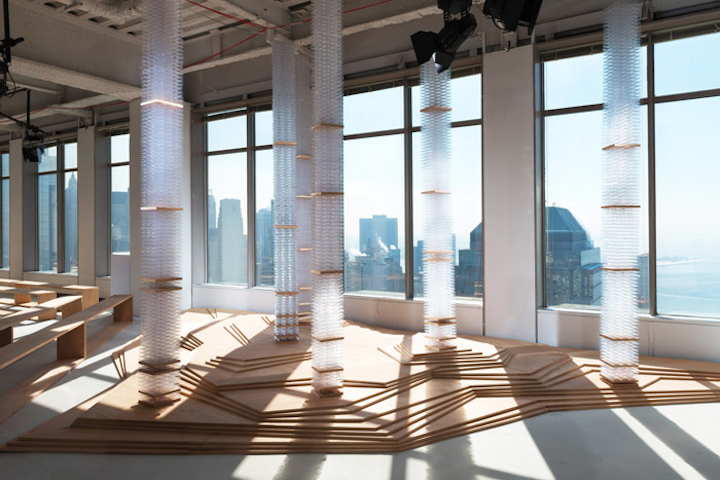 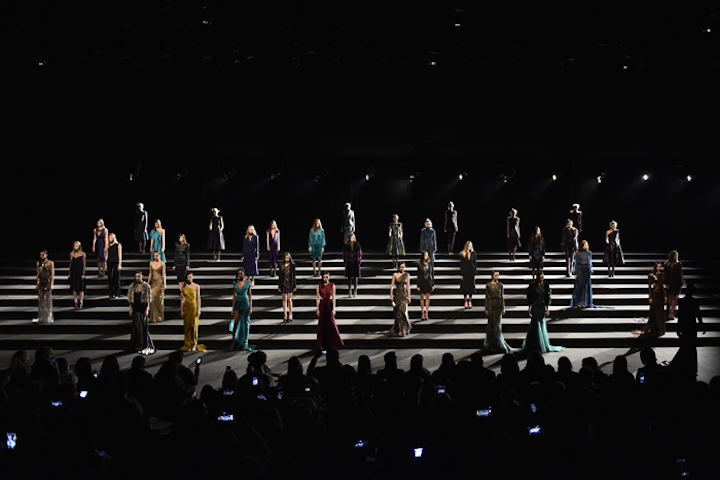 In a dramatic 180-degree turn from her previous traditional fashion show formats, Monique Lhuillier, together with show producer Gayle Dizon of Dizon Inc., created a stunning tableau vivant-like setting with her cast of models. By eliminating 50 percent of the seating capacity for the February 13 show at the tents at Lincoln Center, set designer and show choreographer Andrew Ondrejcak was able to highlight the collection's immense detail of color and texture with only a minimal amount of extra lighting. The risers allowed models to walk back and forth and land on different elevations, culminating in one big photo op that provided maximum impact for both photographers and attendees. 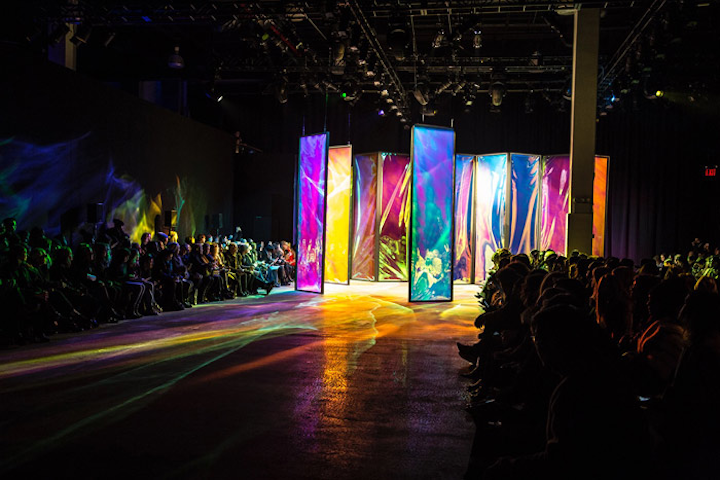 The 390 guests at Thakoon's fall show, held February 15 at Stage37, were greeted by what was described as "a physical manifestation of the Northern Lights." For the Dizon Inc.-produced outing, set designer Jonathon Beck utilized a new 3M material called Dichroic glass film that, when placed in specific angles, revealed a stunning reflection of the entire color spectrum of light. The abstract light refractions juxtaposed strikingly against an otherwise all-black venue, providing extra impact for the designer's collection. 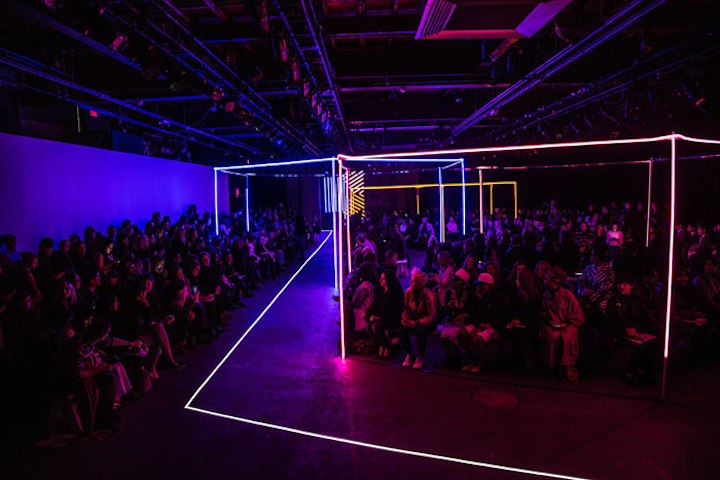 A slick feel was had at the February 16 Milly by Michelle Smith show at ArtBeam, where, to reflect the designer's references to post-modernism, New Order album covers, and Martian Raysse artwork, Dizon Inc. imagined an eclectic yet vibrant set. Utilizing a new type of LED neon and Flatlite tape, both of which could be cut and bent as needed, the result was bold pops of color that created a unique layout within the otherwise stark venue.