How Cadillac Is Dramatically Reinventing Its Image

The American automaker showcased a new creative strategy at events before and during this year's New York International Auto Show.

Go big or go home. That was Cadillac’s mantra at this year’s New York International Auto Show, where the American automaker put forth an impressive experiential effort as it set out to reinvent itself. Indeed, a trifecta of events culminated with not only the reveal of a new flagship sedan, but a new brand identity as well.

Easily the most high profile of the three events hosted took place on March 31 at the Brooklyn Navy Yard’s increasingly popular Duggal Greenhouse. (Tiffany & Company will host its annual Blue Book Ball there on April 16.) Inside the 35,000-square-foot space Cadillac president Johan de Nysschen presided over a crowd of more than 500 journalists and influencers gathered for the CT6 debut.

Jack Morton Worldwide, which led the overall orchestration of the event, co-produced the reveal component with Aquila Productions and worked cooperatively with set designer Stefan Beckman to create the cityscapes; all parties reported to Melody Lee, director of brand strategy at Cadillac. Planning for both events started last fall and took more than eight months.

According to Lee, between the Brooklyn reveal event Tuesday night—its location chosen for its “entrepreneurial spirit”—and the new auto show unveil Wednesday, it was basically a coming out for the brand. “Our event encapsulated the combination of boldness, sophistication, and optimism—it’s the three together that create a sense of the brand,” said Lee.

The Brooklyn affair played up a sense of arrival, specifically Cadillac's recent move to a new global headquarters in downtown Manhattan. The new location itself served as the backdrop of the carmaker's new television campaign—in which New York designer Jason Wu has a guest spot—that debuted at this year's Oscars. Executives and hosted media were housed at the Ritz-Carlton Battery Park and were shuttled to the Duggal Greenhouse via either ferry (which boasted branded seat cushions) or car, both of which allowed for expansive views of the Manhattan skyline. “Whether on the ferry or in the cocktail space, the events were planned to be a premium experience and a journey of little discoveries,” noted Lee.

Inside the event, a dramatic 18-second opening of a set of oversize doors led guests to the main room, where a series of panels imitating the skyline lined the space and images were projected mapped to large screens. What’s more, everything from the stage to the decor to even the car was white—a color not oft seen on the display stage but fitting given the concept of reinvention.

“As our very first environmental expression of the brand, we used white to symbolize rebirth and reinvention,” said Lee.

“I wanted to create an abstract city that surrounded the entire space, but in an elevated way” said Beckman. “I also wanted to have a sense of discovery throughout the space. Symbolically the city was also about Cadillac's move to New York City.” As Lee added, the brand certainly took some risks. “It was unexpected for Cadillac, but we told Stefan to push us out of our comfort zone and present the edgiest and most interesting ideas.”

At the Jacob K. Javits Convention Center the next morning, the world’s media was introduced to another new product for Cadillac: a show set and brand identity that went from being very angular and black and white taken from an arts and science theme to one that was, you guessed it, all white and which led with the story of the brand using the CT6 as the anchoring car. “It’s the idea that the future is brighter than the past,” noted Lee.

For the auto show components, exhibit and event marketing company Czarnowski led the overall strategy, design, and build, while Jack Morton Productions provided the content on the LED video screen. And similar to the reveal the night before, the show stage utilized a circular centerpiece in the form of an iris whose LED wall enveloped the stage and served to amplify the storytelling. As part of the design, the back wall was designed in the Piet Mondrian-esque pattern found in the new Cadillac crest and featured electrochromic glass the opacity for which was timed to choreographed music.

A third cornerstone for the brand was a decidedly more discreet happening: an internal gathering on the morning of the reveal brought together some 300 Cadillac employees from around the world for the brand’s first-ever brand immersion activation. Employees spent four hours with the executive and design teams being taken through Cadillac’s new creative strategy.

As for budget, Lee declined to comment on exact figures, but did confirm that Cadillac spent “significantly more” on both the reveal and auto show environments than with any other vehicle reveal or auto show presence in the last decade. (Parent company General Motors is pouring roughly $12 billion into its Cadillac brand.)

“We want to continue the tradition of having big announcements in New York,” added Lee, a clear nod toward Cadillac’s new hometown. “We want to play in our own space, not ‘out German the Germans.’” 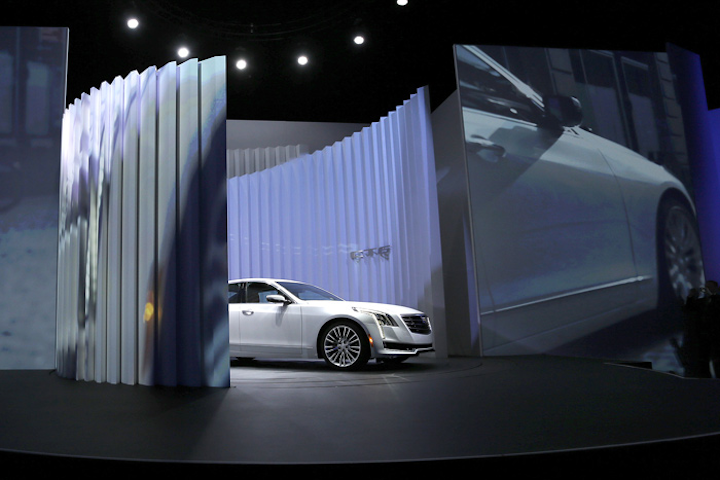 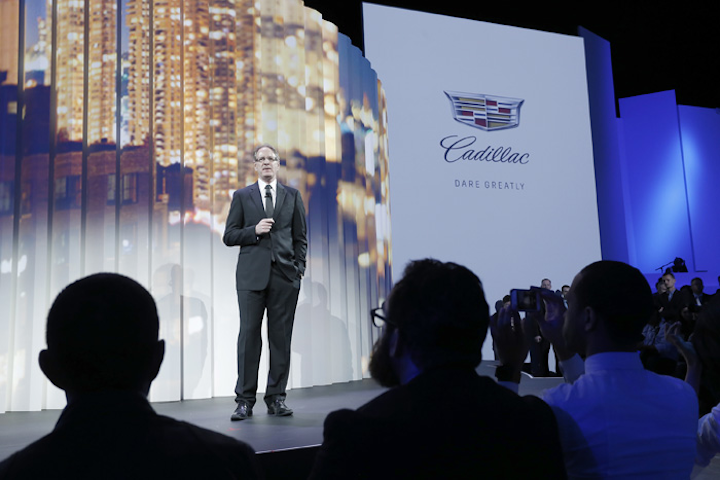 Cadillac president Johan de Nysschen gave introductory remarks on the CT6 sedan, laying out his brand's new vision and direction. Projecting mapping against six large areas allowed his words to be complemented by crisp, large images that could easily be seen from any vantage point in the 35,000-square-foot space.
Photo: Brian Ach/Getty Images Assignment for Cadillac 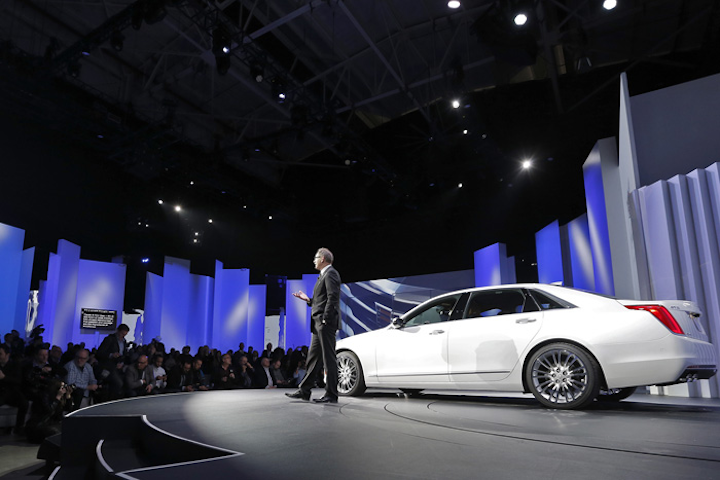 Set designer Stefan Beckman created the "Abstract City" skyscape as a symbol of Manhattan being Cadillac's new global home. The panels, which ranged in height from 20 to 25 feet and widths from 20 to 65 feet, were painted muslin stretched onto hard frames. "We talked about white as a fresh start," said Beckman of the choice of color—or lack thereof. "It was a clean, modern approach to Cadillac and where they are going."
Photo: Brian Ach/Getty Images Assignment for Cadillac 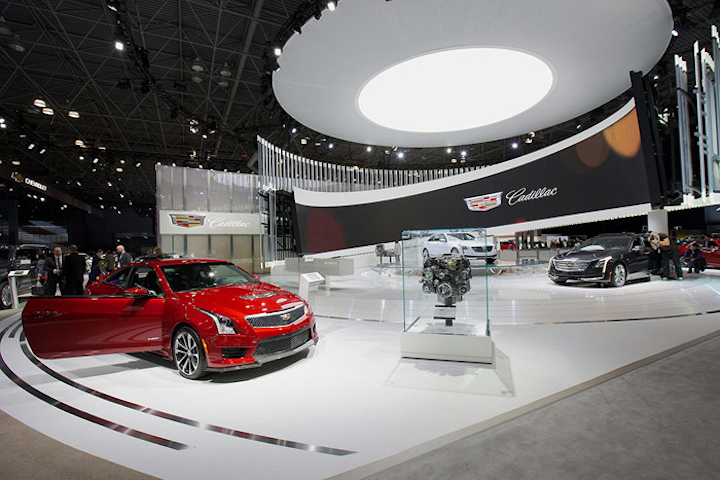 As part of Cadillac's relaunch, the brand debuted a brand-new all-white booth template that will be applied at all auto shows going forward. "We debuted the stand in New York because we wanted this whole week to culminate as the coming out for the brand," said Melody Lee, Cadillac's director of brand strategy.
Photo: Courtesy of Cadillac 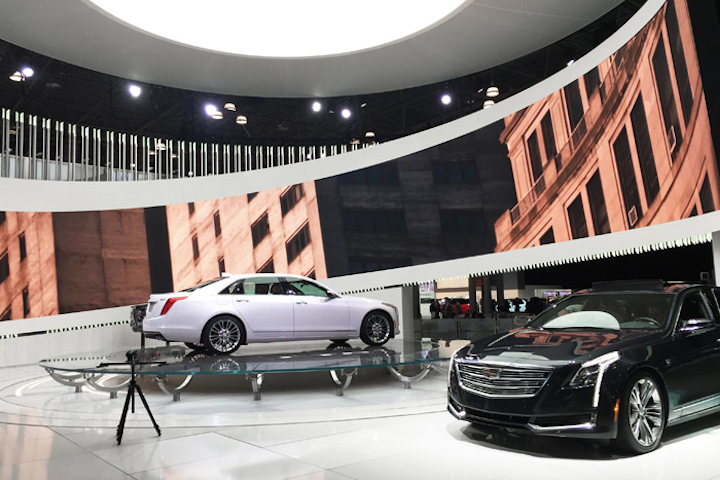 Every single element of the set at the Jacob K. Javits Convention Center, down to the bar stools and tables, was custom built for the occasion. A significant departure from the angular black and white booths from past show seasons, the new stand soars as it wraps around the vehicle—an idea of expressed reinvention. The iris, which was also seen at the CT6 reveal event, amplified the storytelling thanks to a full-scale LED video wall that allowed for incredibly rich detail shots to be displayed.
Photo: Courtesy of Cadillac 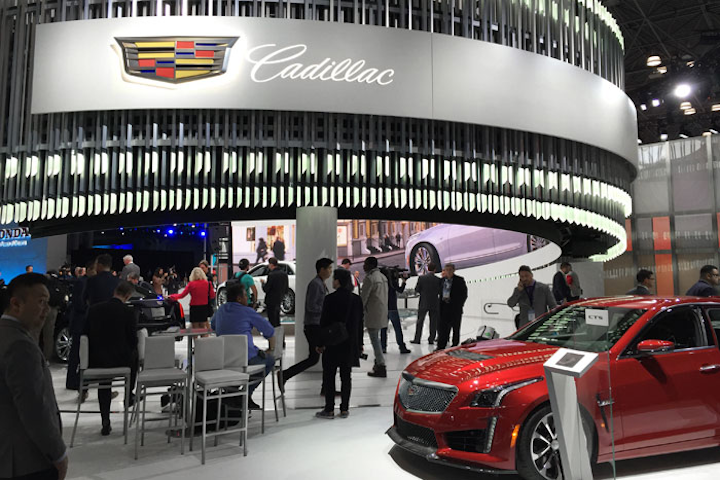 Cadillac's effort was perhaps the most visible—and brightest—of all the auto show sets at the Javits Center, with hundreds of metal vertical slats forming the outer layer of the main stage iris. Directly adjacent to the glass-topped stage and bar-cum-lounge area was a massive wall featuring the Piet Mondrian-esque patterned Cadillac crest, the electrochromic glass composition of which changed its opacity throughout the day to pre-set choreography.
Photo: Courtesy of Cadillac
More in New York City & Tri-State Area