The Food Network & Cooking Channel New York City Wine & Food Festival presented by Coca-Cola celebrated its 10th anniversary from October 12 to 15, with more than 70 food and drink events taking place at various venues throughout the city. To celebrate its first decade, the festival provided food and beverage enthusiasts a number of new events—such Rooftop Iron Chef Showdown: Battle Iron Bounty at Pier 92—as well as returning signature parties and tastings, including the Blue Moon Burger Bash and Coca-Cola Backyard BBQ at Pier 92, and the weekendlong Grand Tasting at Pier 94. Prior to last weekend's event, NYCWFF has raised more than $10 million to support its commitment to end hunger, with proceeds benefitting relief organizations Food Bank for New York City and No Kid Hungry.

As in years past, festival sponsors provided event attendees with a number of interactive activations incorporating food and drink. Returning sponsors such as Coca-Cola and Mastercard featured new or upgraded experiences, while sponsors such as Blue Diamond Almond Breeze brought new booths to engage with foodies. Here's a look at the sponsor highlights from this year's most buzzy NYCWFF events. 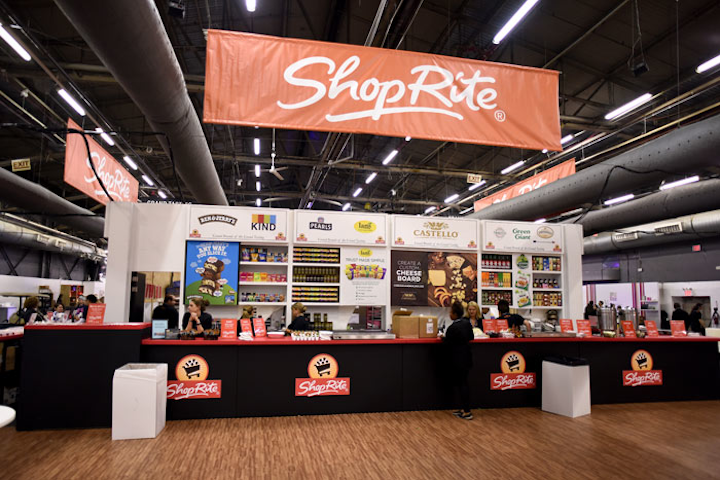 ShopRite's massive, four-sided Grand Tasting booth was inspired by its grocery store aisles, and featured the logos of numerous food brands. The booth offered attendees a variety of eats made with products sold at ShopRite. 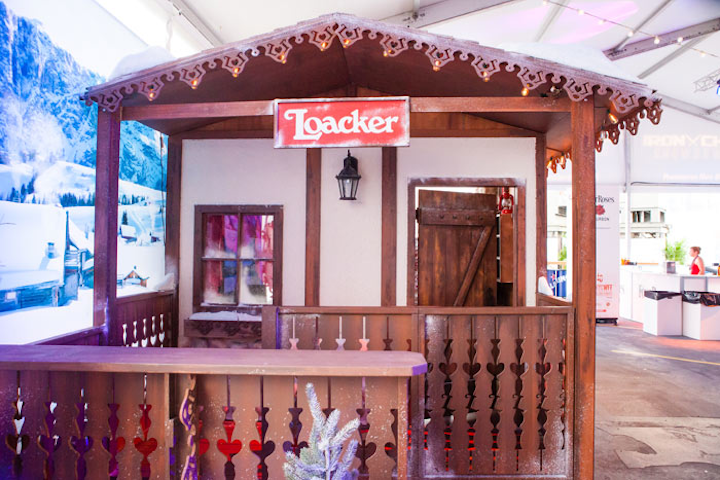 Italian wafer and chocolate brand Loacker featured a ski lodge-theme activation at Pier 92 events, including the Blue Moon Burger Bash. The lodge was inspired by the Dolomite mountains in the Italian alps, where the brand's ingredients are sourced. The activation was designed and produced by Loacker's experiential agency Story Stable. 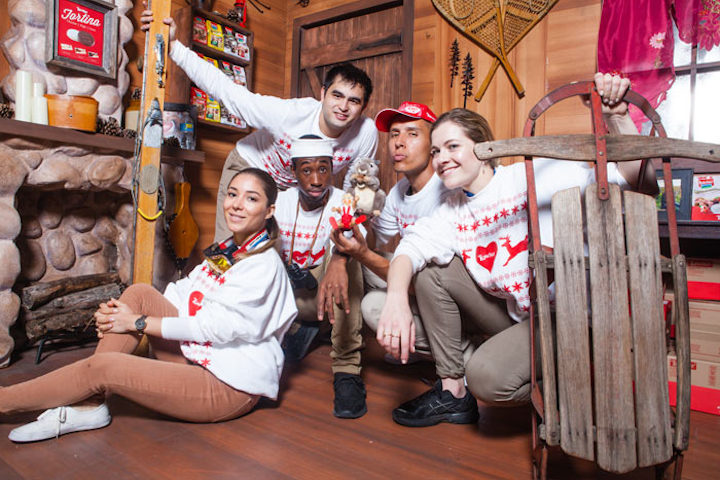 Guests could pose with skis and branded props at a photo booth by A-1 Array, a multi-camera system that creates 3-D animations for sharing. 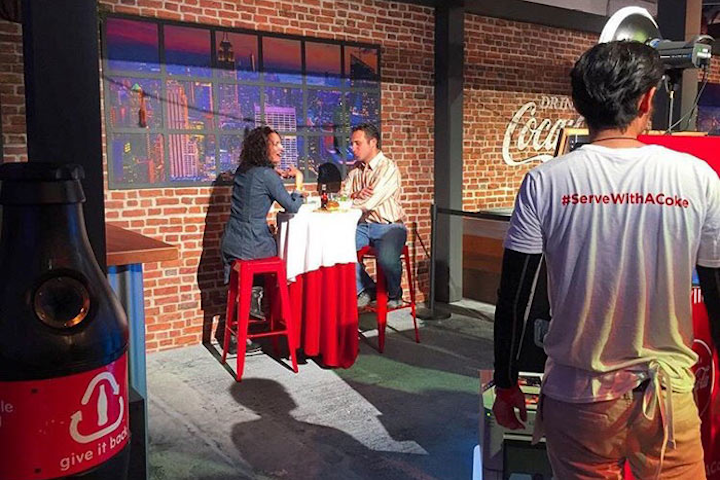 Presenting sponsor Coca-Cola showcased a variety of activations and lounges during the festival, including a branded bar with exposed brick on Pier 92. The activation included a photo op inspired by New York dining. The brand's activations were produced by Melt. 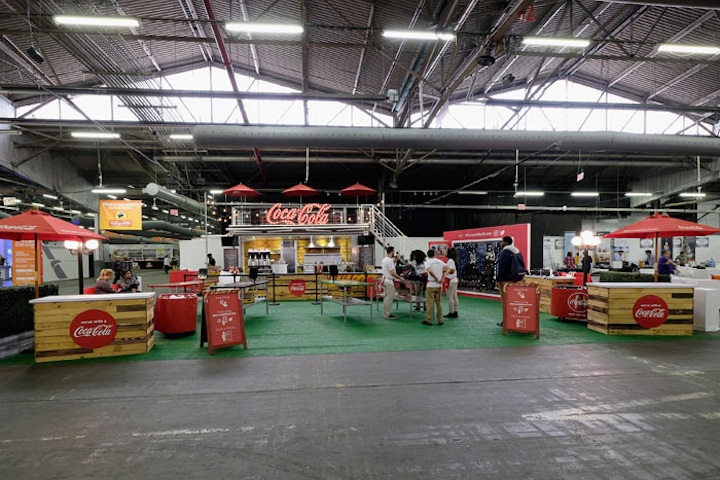 At the Grand Tasting at Pier 94, Coca-Cola had a lounge where guests could enjoy custom Coke-infused drinks and food. A second-level dining and viewing area featured a marquee sign. 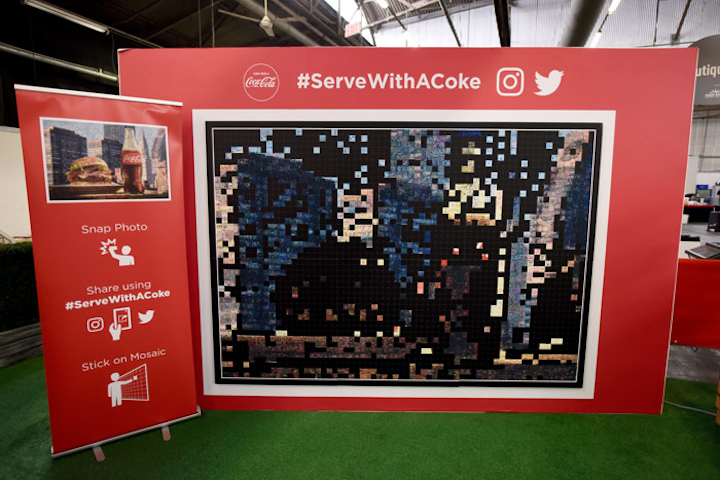 An interactive photo-sharing station invited guests to take a photo at the event and share on Instagram and Twitter with the hashtag #ServeWithACoke. People who used the hashtag could then print out their photo at a Luster photo-printing station to stick on a mosaic, which eventually revealed the image of a burger and a Coke with New York in the background. 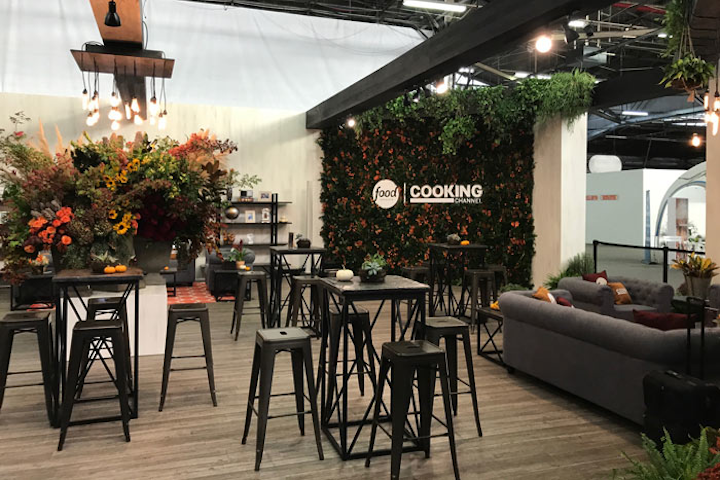 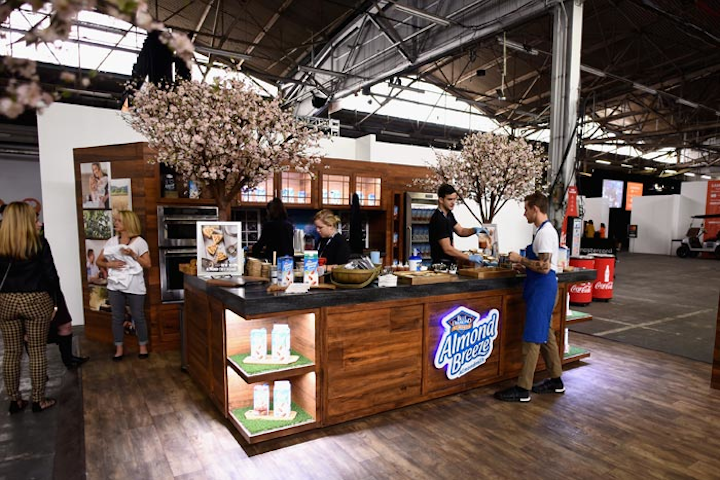 At the Grand Tasting, Blue Diamond Almond Breeze had a branded, kitchen-inspired station that offered bites of vegan tomato arancini and New York cheesecake made with almond milk by food specialist Patty Mastracco. The kitchen was produced by Match Marketing Group. 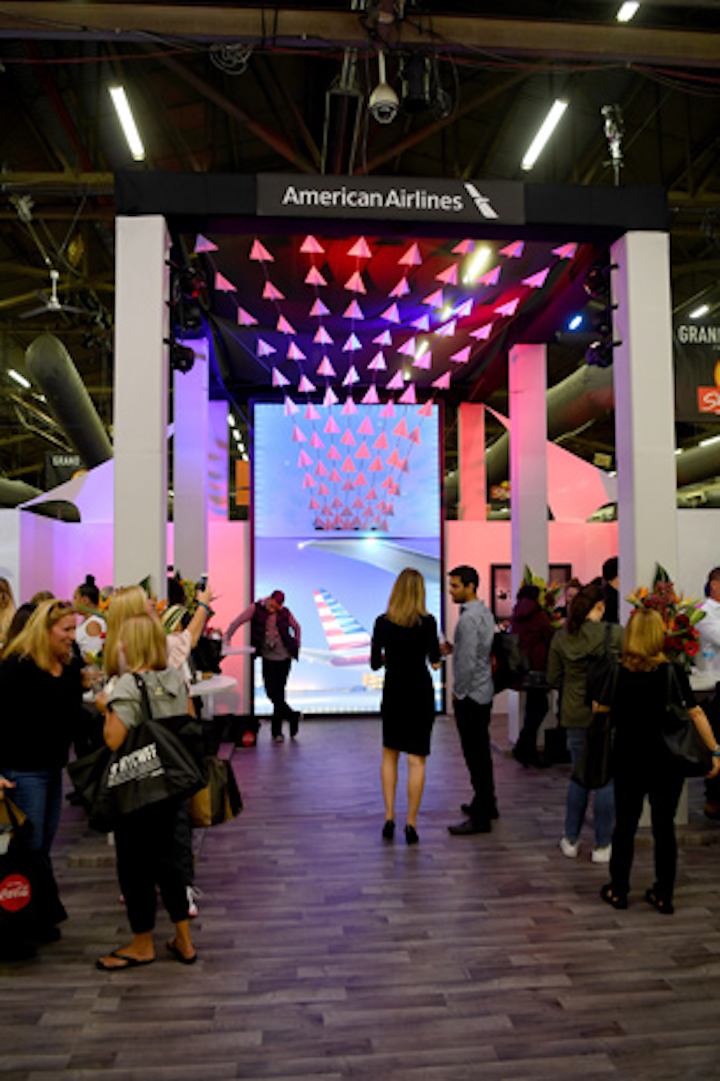 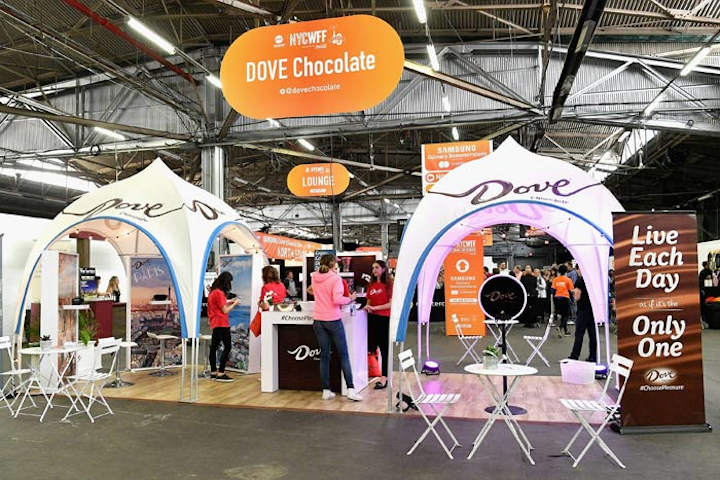 Dove Chocolate returned to the Grand Tasting with its branded photo booth and VR lounge, which virtually transported guests to Paris and Reykjavik. 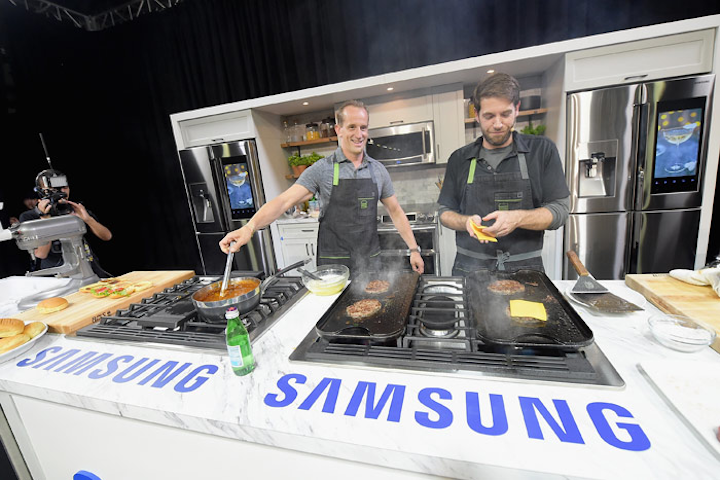 Returning sponsor Samsung's branded cooking demo kitchen featured demonstrations from a number of chefs throughout the weekend at the Grand Tasting. Events included a burger demo by Randy Garutti and Mark Rosati. The Samsung kitchen was designed by RQ Agency. 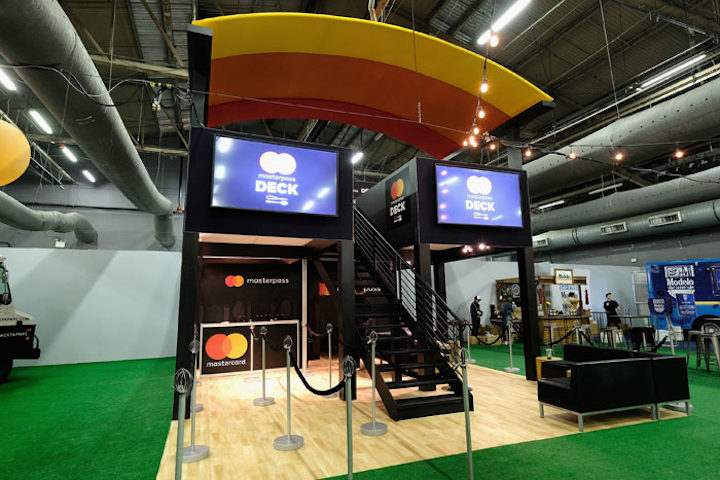 Mastercard's two-story deck offered a V.I.P. viewing experience for cardholders at the Grand Tasting. The deck was produced by Octagon with Art Guild. 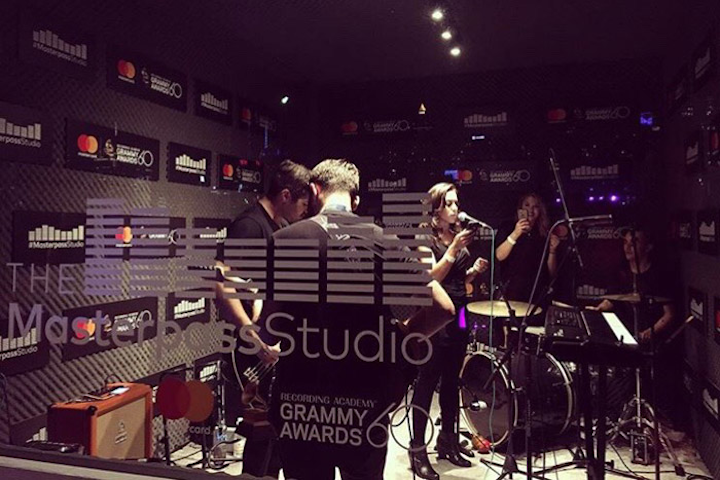 At Pier 92 events such as the Blue Moon Burger Bash and Rooftop Iron Chef Showdown: Battle Iron Bounty, Mastercard activated a branded recording studio that allowed guests who signed up for Masterpass—the company's digital wallet service—to record a song with a live band. Guests could then take home their song on a custom vinyl record. The studio was produced by Octagon with global events agency First and marketing agency Frukt. 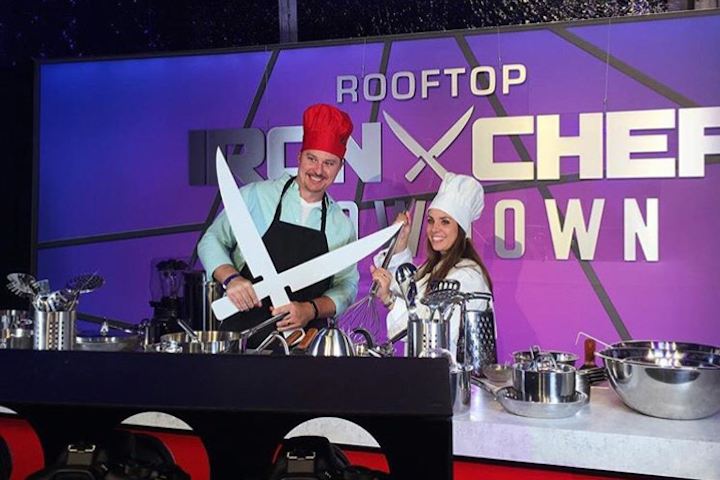 At the Rooftop Iron Chef Showdown at Pier 92, one of the festival's new events this year, guests were invited to pose at an interactive photo booth inspired by the series. 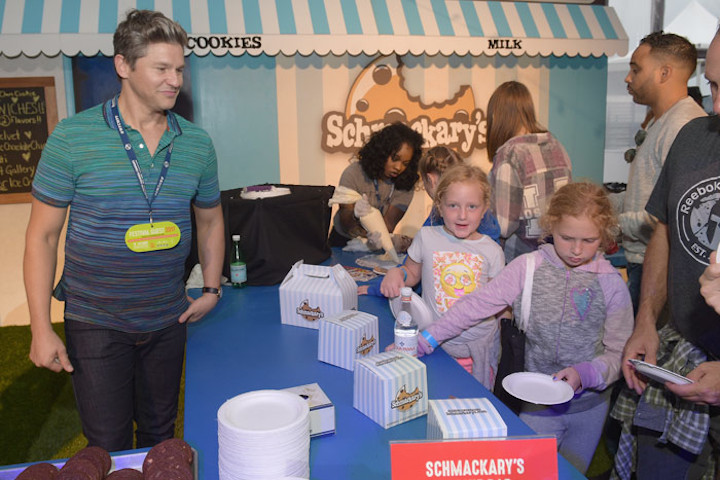