These days a brand's communication medium is as much a part of the message as the message itself, and innovative marketing requires more than just responding to a tweet. So even store openings are becoming opportunities to explore new technology-enabled customer interactions. The debut of New Balance's first experience store in North America last week was not only a chance for the Boston-based company to gain a foothold in New York's retail market, but also a way to try its hand at a mobile app contest while expanding on a global campaign launched in March.

The campaign and its new tagline, "Let's make excellence happen," center around New Balance being a coach and a catalyst to strong performance, and were devised to resonate with consumers on a more personal level, and to underscore the brand's heritage as a maker of athletic shoes. With that in mind—and an eye to driving traffic to the store—New Balance created a virtual relay race where an iPhone app loaded with a map and augmented reality help consumers find digital batons scattered throughout New York, which they then can turn in at the new retail location to redeem for prizes.

"One thing that we wanted to do was stay true to our brand and our heritage, and our brand is all about running and moving. The idea behind the digital baton was, it was a really great way to engage consumers in running and getting them to the store and engage with the brand. If you think about it, a baton is kind of the symbol for running, and in the track and field world, when you are handed the baton, the priority is to A, not drop it, and B, run as fast as you can," said Tracy Knauer, New Balance's integrated marketing manager. "As a brand, we've never done this before. This is first time we've done something like this in North America, and it's definitely the first of its kind using the augmented-reality experience to drive brand engagement in the U.S."

The prizes for the game, which started on Thursday, include the custom NB NYC 574 shoe, an exclusive product to New York, and—for the player who collects the most batons by the end of the contest—a 14-karat gold baton etched with the brand's logo. Knauer added that players can also steal batons from each other. "So [the app] creates a competitive, fun environment, and it's also based in the community because you're participating in this marketing game with your community and your peers."

A similar approach was taken with the store's preview party on Wednesday, focusing on demonstrating New Balance's commitment to the community and the company's evolution. Produced by MKG, the evening event offered a menu inspired by the specialties of New York neighborhoods and the theme of past, present, and future. Passed hors d'oeuvres from Creative Edge included simmered meatballs in pasta to represent Little Italy, steamed chicken dumplings to epitomize Chinatown fare, and fish tacos of grilled mahi and chunky chipotle mayo as a nod to the Fulton Street Fish Market. The concept of past, present, and future was communicated through the cocktails, with a drink to symbolize the past (an old-fashioned), the present (a ginger mojito), and the future (a nitrogen-infused blueberry-flavored lemonade).

To continue the imagery used in the mobile app, batons also featured prominently in the design of the preview party. The invitation was a brass-colored metal tube, a installation of the batons hung over the store's entrance, and guests could pose with batons at Polite in Public's photo booth. 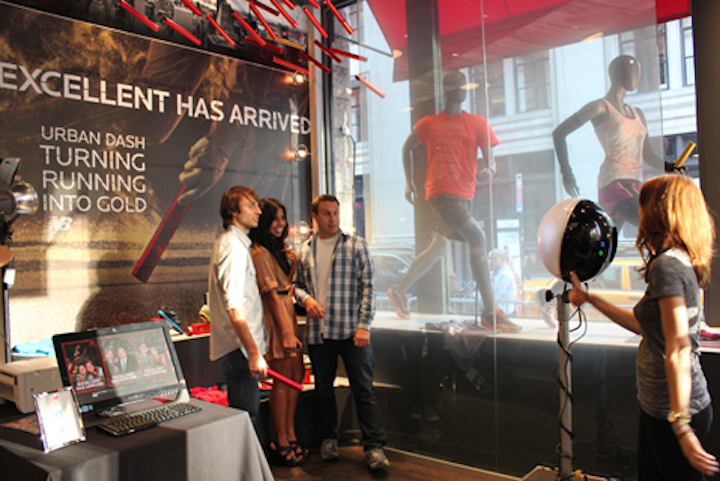 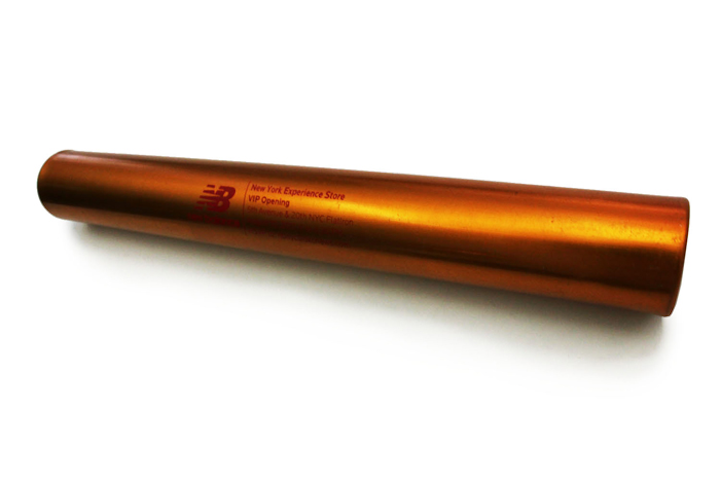 The invitation for the V.I.P. preview party was a brass-colored baton, and hinted at a concept that was woven into the event and the consumer promotion. The latter, dubbed the "Urban Dash," consisted of a virtual scavenger hunt via a mobile app, giveaways of New Balance sneakers, and a grand prize of a 14-karat gold baton.
Photo: Jeeyun Lee for BizBash 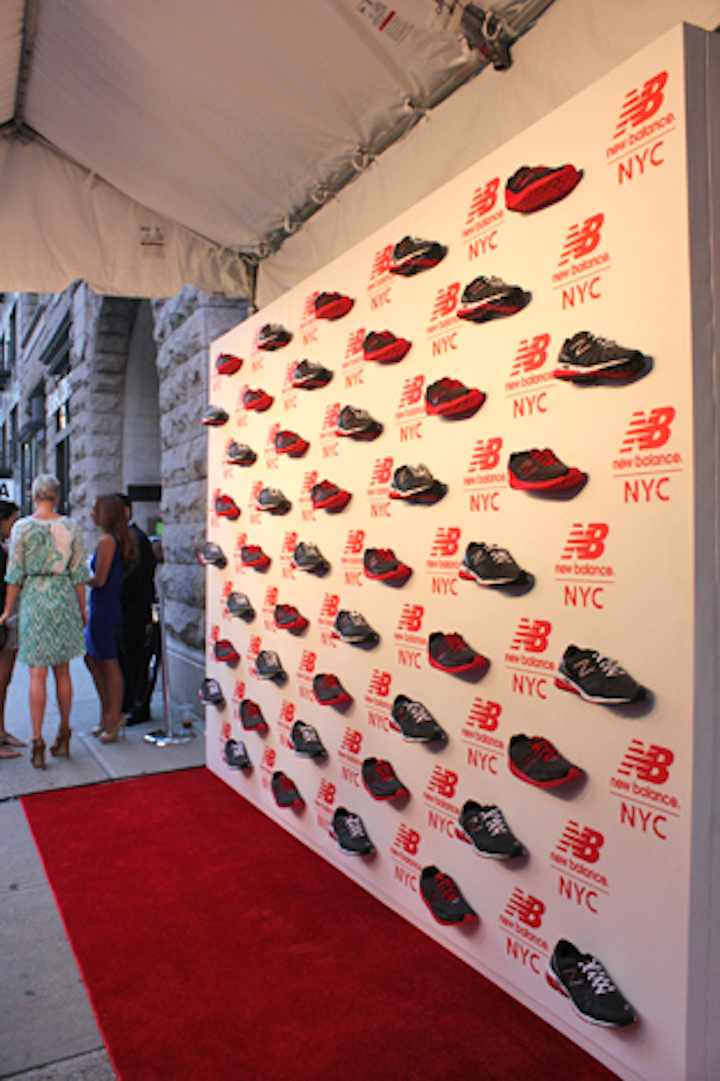 As a fun, three-dimensional take on a run-of-the-mill step-and-repeat, the V.I.P. preview for the store used real running shoes mounted to a wall as a backdrop for the red carpet.
Photo: Jeeyun Lee for BizBash 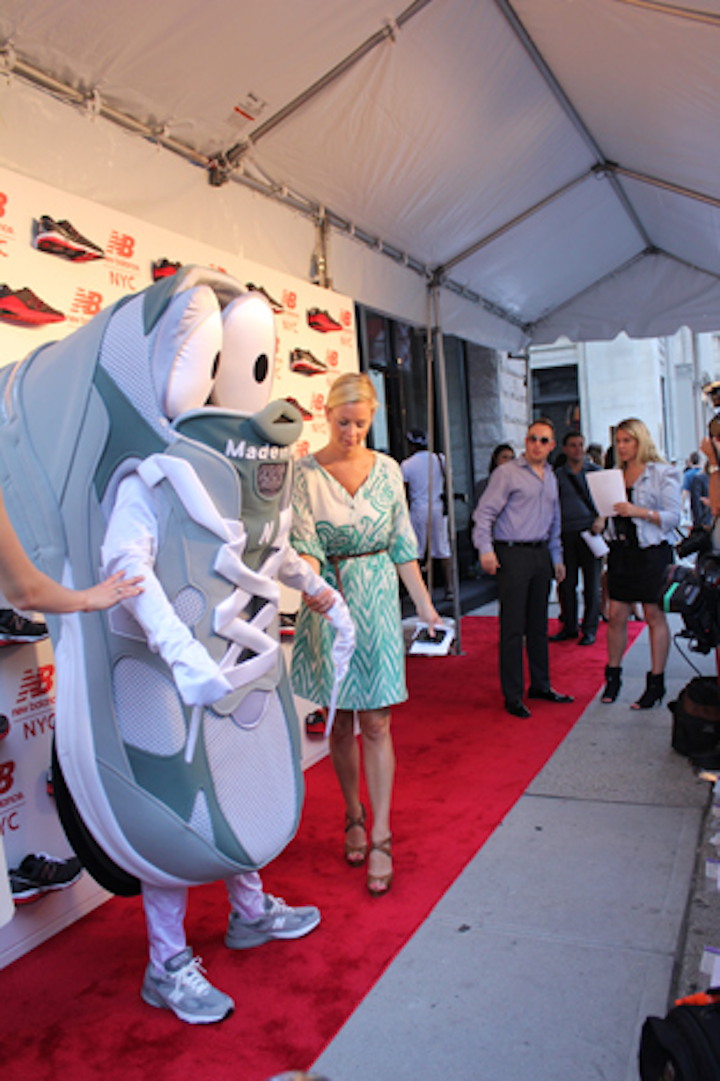 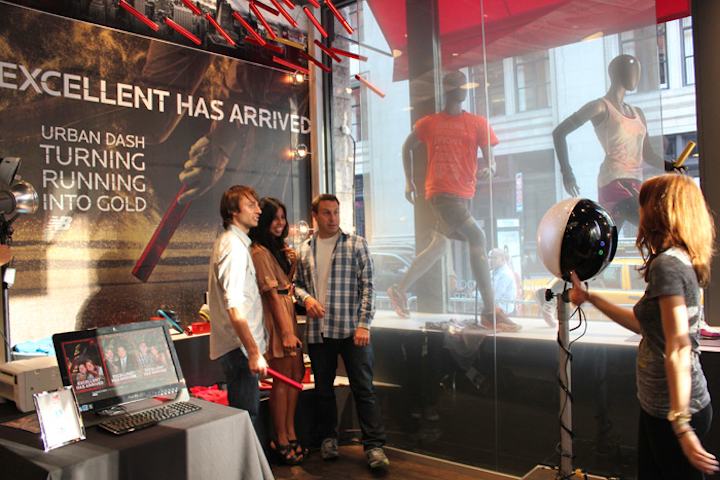 The baton imagery was incorporated into Polite in Public's photo booth area. Attendees could pose with the relay race sticks in front of signage advertising the Urban Dash promotion.
Photo: Jeeyun Lee for BizBash 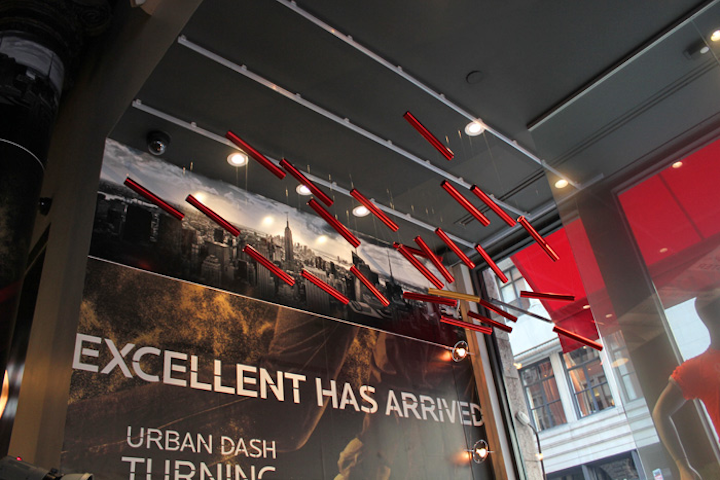 Above the photo booth, an installation of batons is part of the store's decor.
Photo: Jeeyun Lee for BizBash 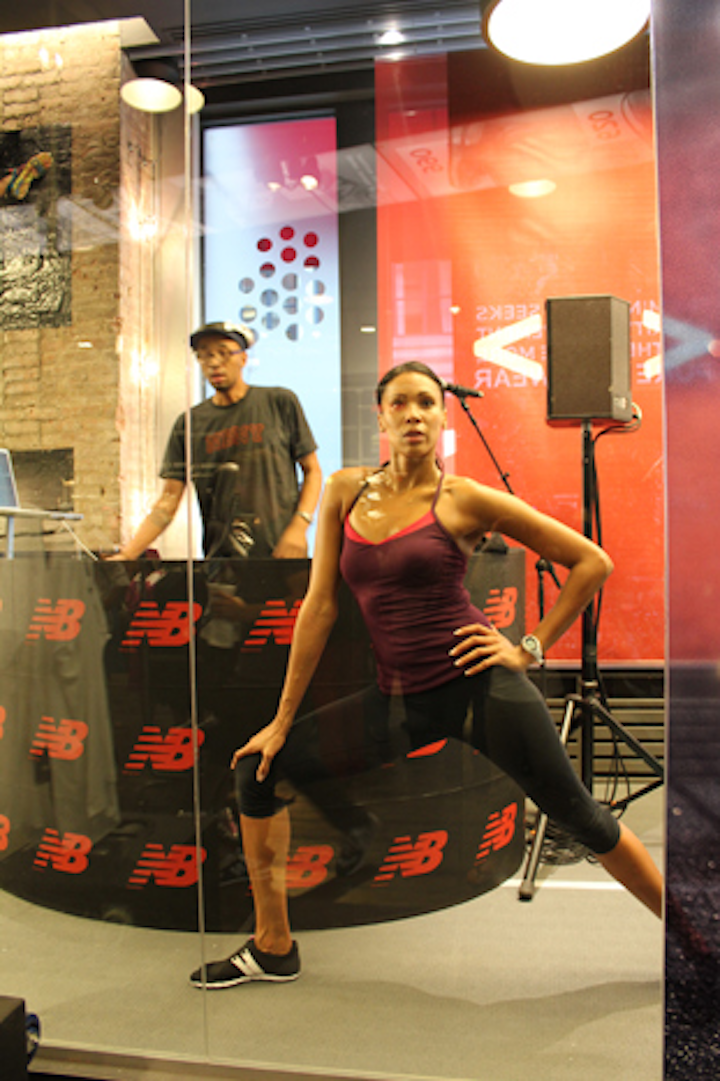 In the north windows of the Flatiron district store is a two-lane Mondo running track, and for the event, the producers placed the DJ booth and models sporting New Balance gear in the glass-enclosed area.
Photo: Jeeyun Lee for BizBash 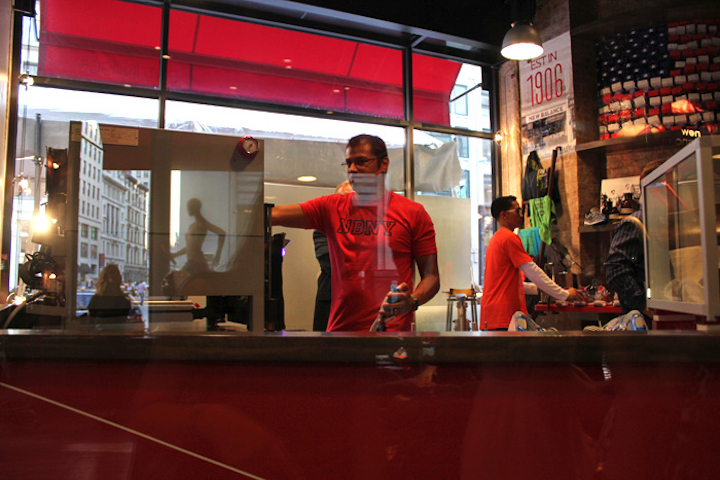 Designed to underscore the brand's commitment to domestic manufacturing, New Balance associates assemble shoes in a demonstration area. At the event, the section was manned by two staffers who attached soles to shoes while guests watched.
Photo: Jeeyun Lee for BizBash 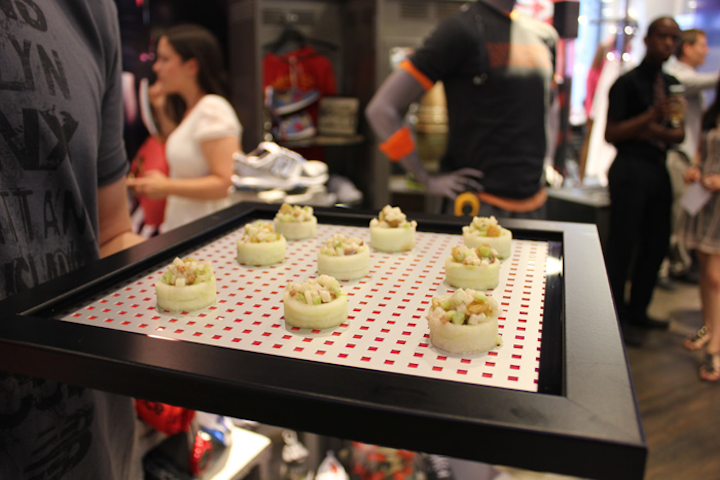 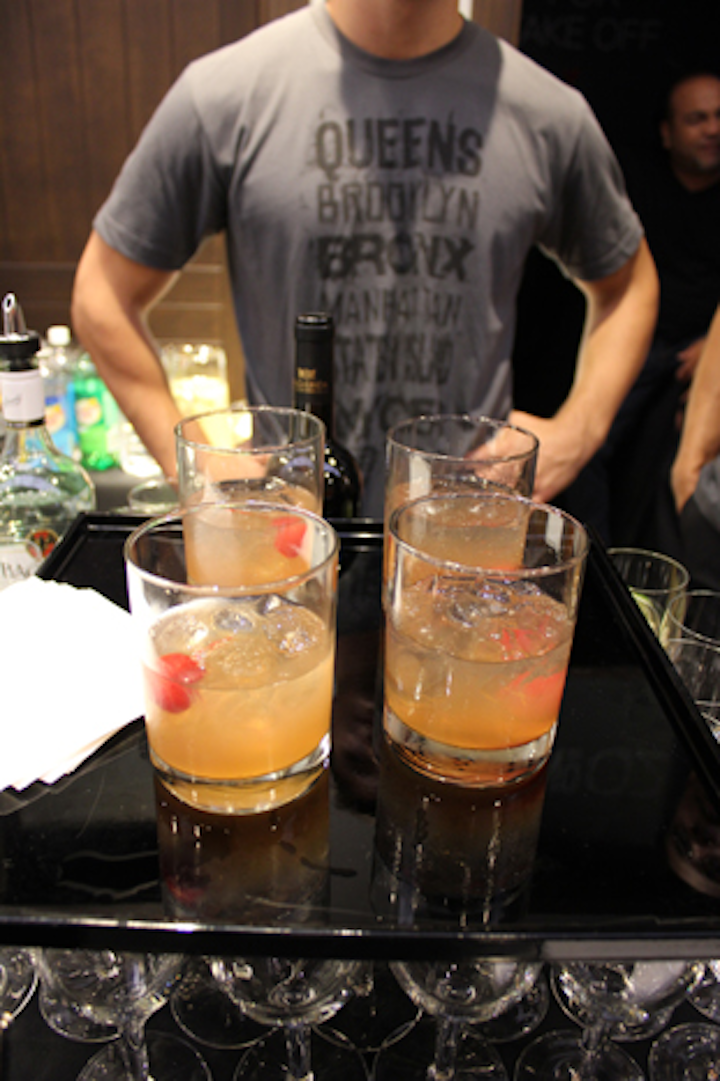 Conversely, the drinks menu was intended to highlight the idea of heritage with drinks representing the past, present, and future. These included an old-fashioned to symbolize the past and a ginger mojito to epitomize the present.
Photo: Jeeyun Lee for BizBash 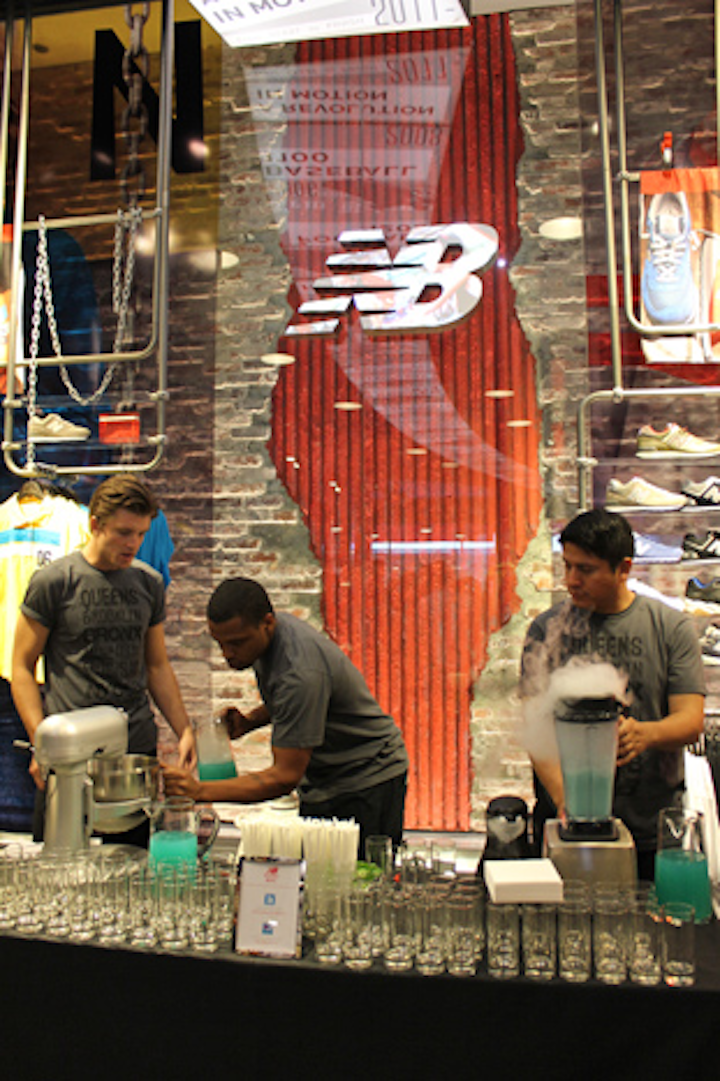 To represent the future through cocktails, Creative Edge provided a station where staffers made nitrogen-infused blueberry-flavored lemonade in front of guests.
Photo: Jeeyun Lee for BizBash 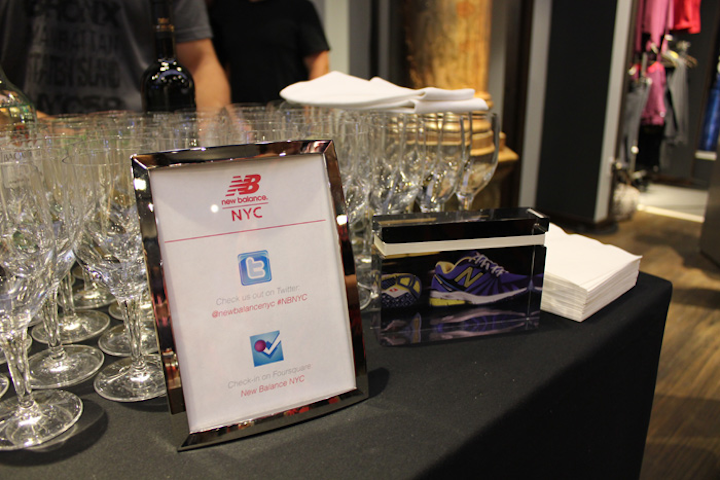 Displaying new technology was just as important as showcasing the brand's heritage, so the store opening included iPads and signs indicating the store's Foursquare location for check-ins, its Twitter handle, and a hashtag.
Photo: Jeeyun Lee for BizBash
More in North America