Elle Canada and the Toronto Fashion Incubator used the opening night of their new consumer show to host a gala dinner and the annual New Labels competition.

Susan O'Neill
Creating an event to showcase Elle Canada while supporting local up-and-coming designers has been on Jacqueline Howe's mind for some time. Yesterday, the vice president of Transcontinental Media and publisher of Elle Canada realized her idea come to life at the first Elle Canada New Labels gala to support the Toronto Fashion Incubator (T.F.I.) at the Direct Energy Centre. “It’s been a seed planted in the back of my mind for about two years, but we didn’t get the final approval [from the Elle offices in France] until September," Howe said of the process that led to the creation of the Elle show, a three-day fashion and beauty show that runs through Sunday.

The magazine has long been a supporter of T.F.I.'s New Labels competition and runway show. "We had been a partner and sponsor with them for the past five years, so last year, after the 20th anniversary event, we talked to [T.F.I. executive director] Susan Langdon and told her what our concept and idea was and that we would like to do an opening night that would be a fund-raiser for T.F.I. and host that competition that we’d been involved with,” Howe said. “She took it to the board and they said, ‘Love it. It’s great.’ And so we started.”Last night's gala kicked off the magazine's three-day consumer show. The evening included a V.I.P. cocktail reception, held on the show floor, followed by a dinner for 250 guests in the galleria lobby, and the runway show, produced by the Idea Shop. Howe reported that the show’s ad campaign inspired the decor for the evening. “Denis Desro shot a girl on the run in a beautiful fuchsia pink raincoat, so we decided that was going to be our image that was promoting the Elle show, and we started to build out the entire show decor,” she said.

Centerplate Catering prepared the food for the cocktail reception, held on the show floor, and the gala dinner. The menu included a grilled maple pear, oven-roasted cherry tomato, and caramelized walnuts served on baby arugula followed by chicken with a citrus-thyme glaze, Yukon gold and sweet potato duchess, and baby bok choy and snipped carrots. Guest dined on a molten chocolate lava cake with minted crème anglaise for dessert. 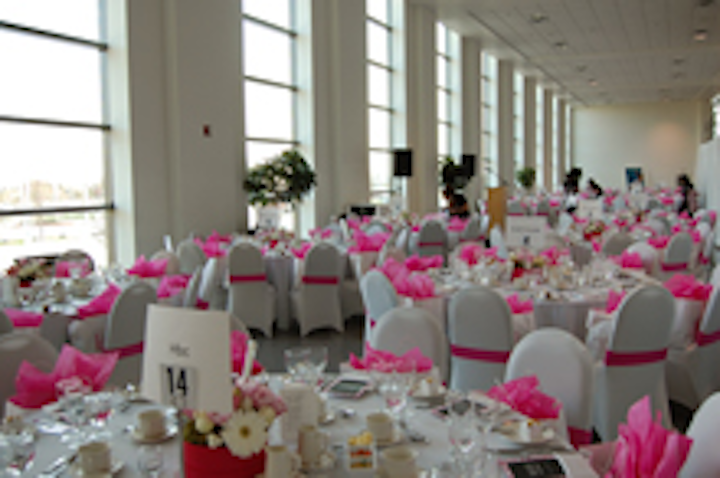 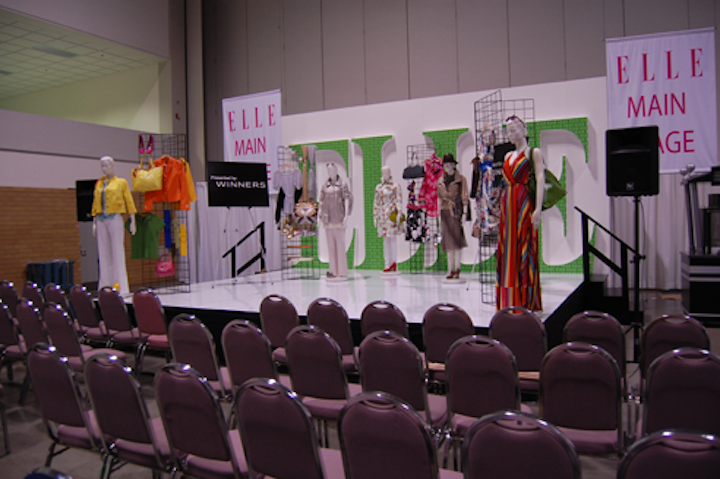 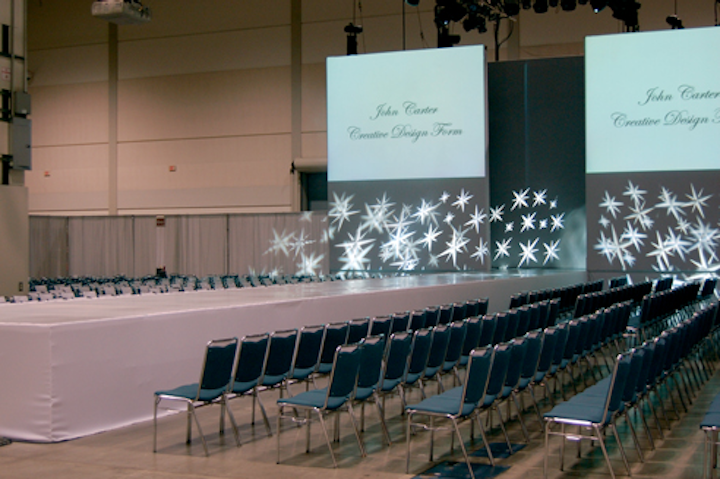 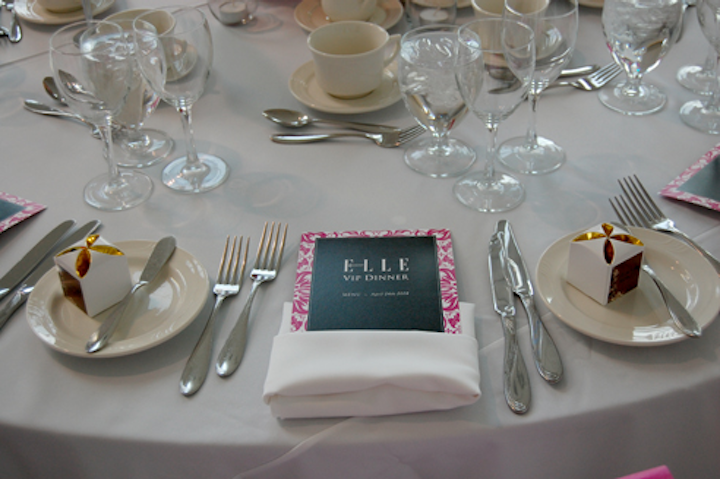 Menu cards marked each place setting at the V.I.P. dinner in the lobby of the Direct Energy Centre.
Photo: BizBash 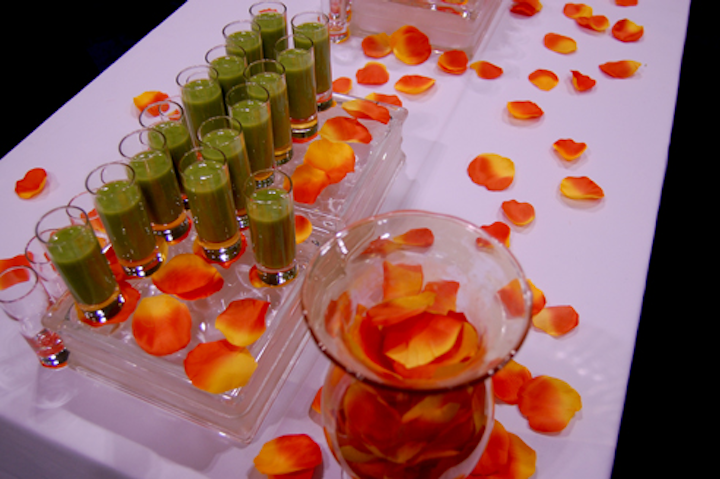 Servers offered shot glasses of chilled pea and mint soup at one of the food stations set up for the cocktail reception.
Photo: BizBash 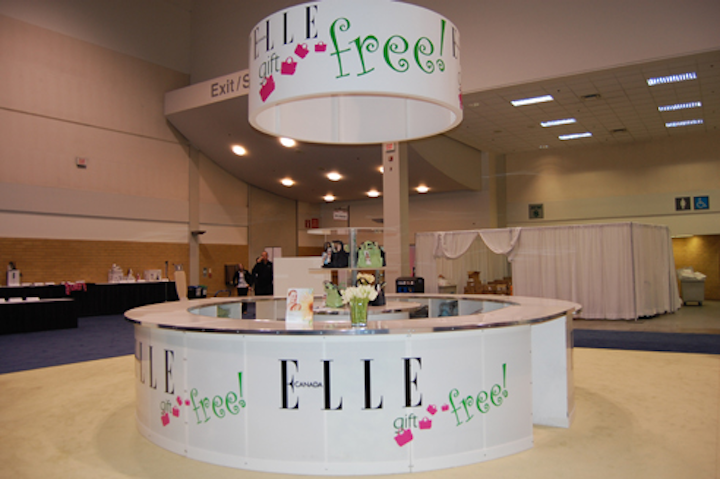 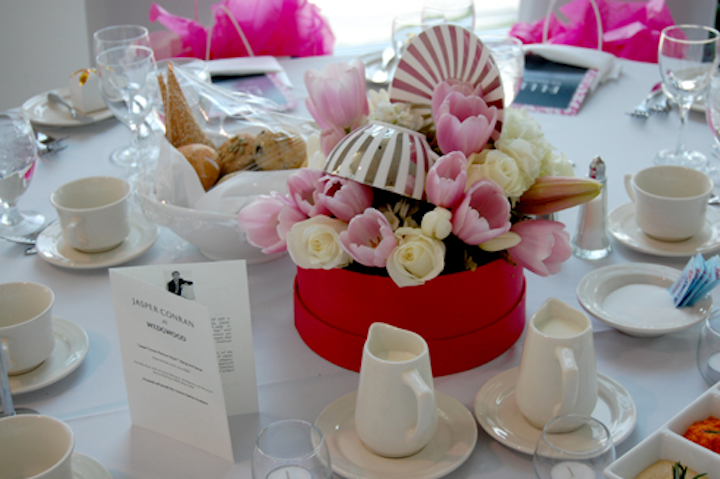 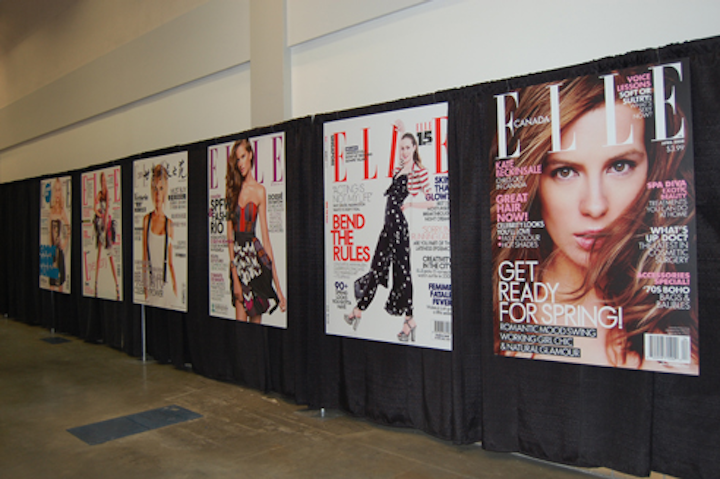 Oversize magazine covers adorned a wall near the entrance to the show.
Photo: BizBash 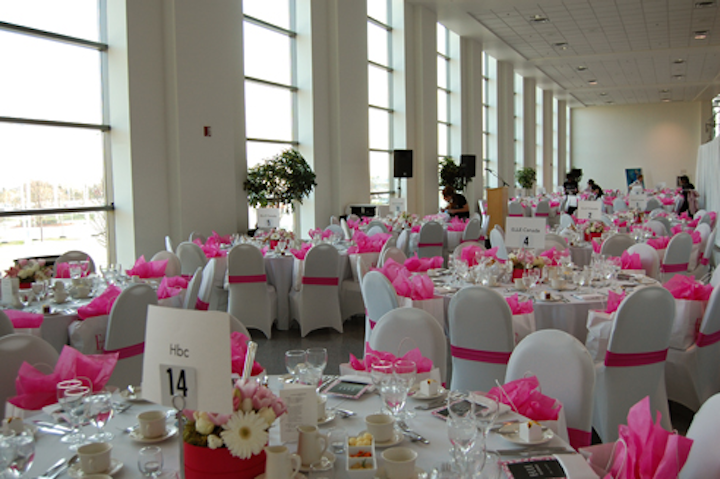 Chair Decor dressed the dining room in white and fuchsia, based on the ad campaign for the show.
Photo: BizBash
More in Toronto