Taking place simultaneously, Fight Night and the Knock Out Abuse Against Women gala gave the guys and gals what they wanted, then brought the sexes together for a gender-neutral after-party.

Last night was a throwback to the Washington of another era—on one end of town, the boys had their fun, while on the other, the girls had theirs. The men’s-only Fight Night filled up the Hilton Washington, while the female-friendly Knock Out Abuse Against Women gala took over the Ritz-Carlton, Washington, D.C.—and both rallied for their own causes.

With 2,000 men in tuxes dominating the hotel’s ballroom, the 19th annual Fight Night raised money for the education and health care nonprofit Fight for Children. But the program itself was for grown-ups only. The starting silent auction reception, where sports memorabilia was plentiful (including a Joe DiMaggio-signed baseball and a Larry Bird-emblazoned basketball), also featured the Washington Nationals Nat Pack cheerleaders, on hand to debut the team’s new jerseys (and serve as arm candy).

With big signs throughout the space stating “Smoking Permitted in the Ballroom Only,” guests kept to the designated areas and lit cigars, sold by cigarette girls in day-glo gowns. The ballroom itself filled with smoke, which bounced off the track lights positioned around the space. “The smoking is such an important part of the event, and it creates an interesting feel, like a nightclub from the 1940s,” said Fight For Children external relations director Jeff Travers. Sparsely dressed tables crowded around the main attraction—a regulation-size, 20- by 20-foot boxing ring.

The event’s format doesn’t change much from year to year, said Travers. “It’s a formula that works pretty well, so we try not to change it, just fine tune it a bit,” he said. “We have made a major upgrade in the event graphics, though, which gives it a more refined feel.”

With producer and M.C. Jim Gibson in the ring, the main program began with an honorary award to boxing legend Joe Frazier for his support of the nonprofit. After chowing down on New York strip steaks, guests took in a laser show and a routine from the Washington Redskins cheerleaders, a surprise performance by Blood Sweat & Tears, and a live auction of a Nationals-emblazoned motorcycle, which was driven right up to the ring. Then the bouts began, with four sets of local boxers taking center stage.

Over at the Ritz-Carlton, the 650 women at the Knock Out Abuse gala settled into an entirely different type of evening, raising funds to combat domestic abuse. The event, produced by André Wells, opened with firefighters welcoming the guests and tuxedoed escorts who walked them down to the ballroom. The setup glittered with a silvery theme.

“It’s the 15th year anniversary, which is really crystal, but it’s hard to do a party in crystal, especially when you’re trying to raise money in this economic climate,” said Wells. “So we wanted to use that element of sheen and shine with pewters and silvers and some crystal chandeliers.”

Actress Kathleen Turner acted as M.C. during the program, with Redskins players Clinton Portis and Santana Moss on hand for the live auction. A dinner for 10 at two D.C. fire stations was on offer, as well as the actual shirts of two firemen (which were thus removed by the winning bidders).

Afterward, Wells rushed guests out  in order to prepare the room for the after-party. “I have 40 minutes to remove 70 tables, including chairs and linens, and women who have been drinking and having a good time all night,” said Wells. “And we have to do it seamlessly.”

Around 11:30 p.m., buses pulled up with the men, who were ready to break from their fraternal evening. The crowd packed back into the ballroom, which staff had transformed with silver and gold furniture, standing Lucite tables and tall stools, and a dance floor. The after-party entertainment, R&B singer Kevin Michael, held the stage past 2 a.m. 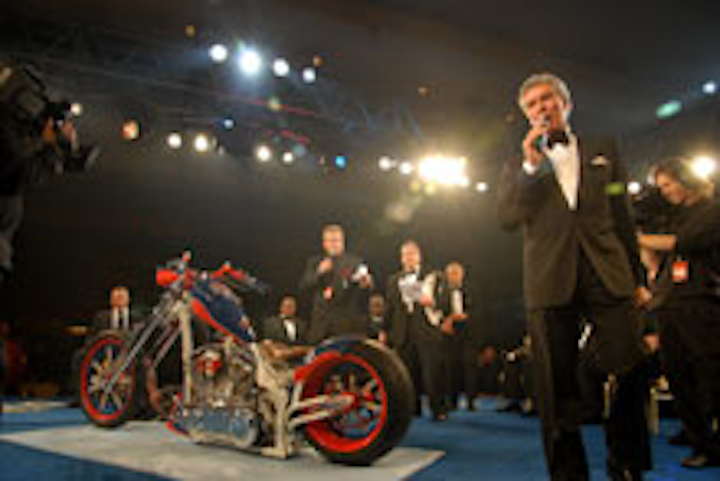 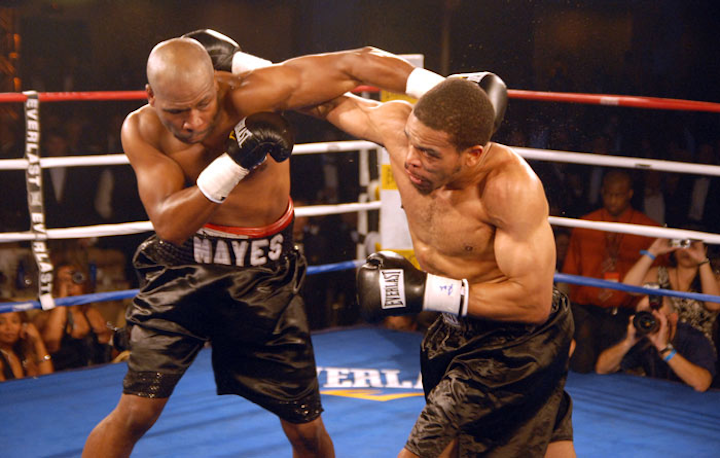 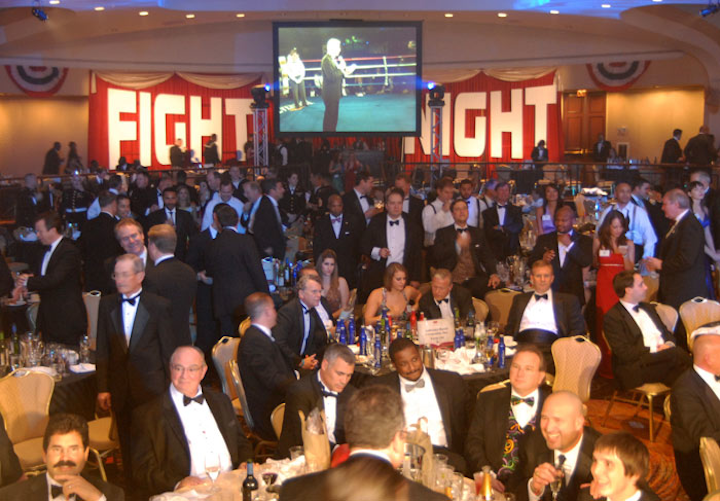 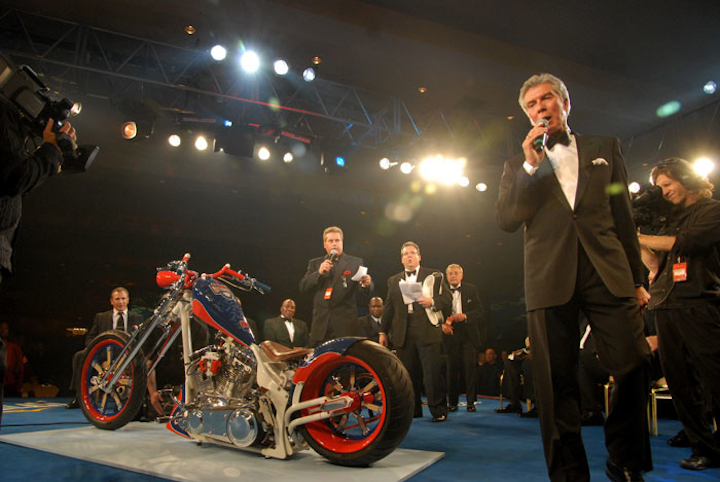 A Nationals-emblazoned motorcycle was part of the auction at Fight Night.
Photo: Chris Corder 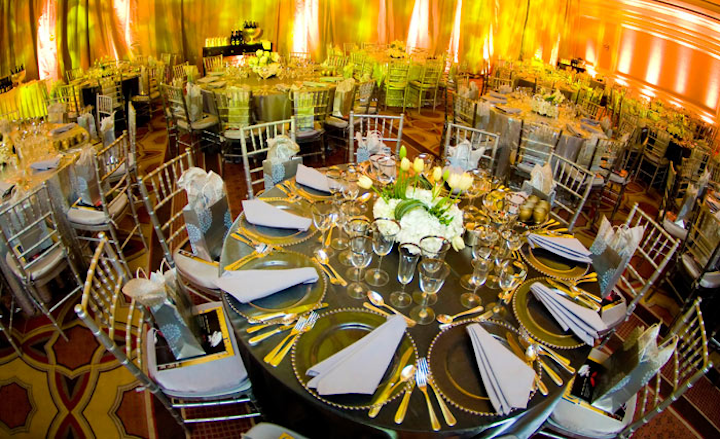 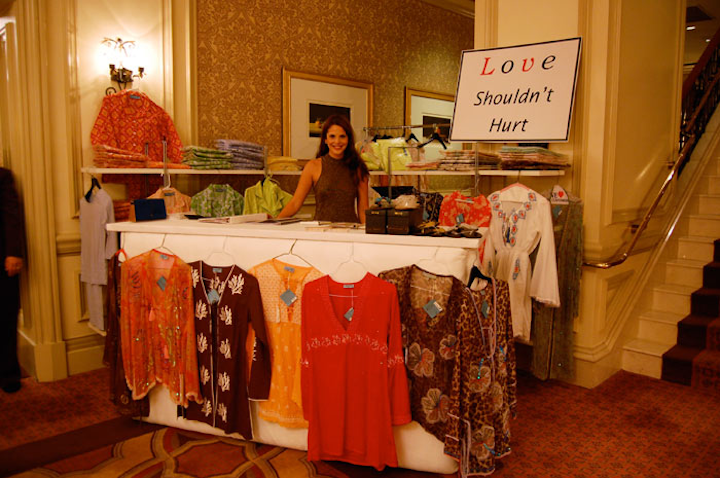 At Knock Out Abuse, the wares had a distinctly feminine bent.
Photo: BizBash
More in Rentals