Macy's annual fall fashion show and after-party took place on Friday night, starting at the Chicago Theatre and continuing on to the State Street flagship store. Formerly known as Glamorama, "The event is now Macy's Passport Presents Glamorama," said Mike Gansmoe, the Minneapolis-based vice president of special productions for the Macy's Parade and Entertainment Group. "We took two of our iconic fashion events—one of them being Glamorama, the other being Passport—and melded them into one over-the-top production."

Gansmoe said the decision was prompted by a desire to "take both of the shows to the next level." Macy's Passport events have traditionally taken place in Los Angeles and San Francisco, while Glamorama has been a signature production at the store's Minneapolis and Chicago locations. To produce the hybrid event, "We combined the [Macy's] creative teams from San Francisco and the Midwest, and took the best elements from both shows to create one uber-cool event," Gansmoe said. He explained that Macy's Passport productions include dance sequences while the Glamorama events offer a headline performer.

At this year's show, Macy Gray and Eric Hutchinson sang, and a high-energy dance number accompanied a presentation of the new Material Girl clothing line, an exclusive-to-Macy's collection that Madonna designed with her daughter, Lourdes. Dancers also appeared in front of a screen that showcased video-game characters doing the same steps, and the number promoted Kinect system for Xbox 360, which hits stores in November.

While the Passport events have traditionally included runway fashion shows, Glamorama presentations take place on a proscenium stage—a format that will be used in Los Angeles and San Francisco in late September. Formerly, San Franciso's Passport was held at Fort Mason and the Los Angeles affair took over Barker Hangar. This year, the fashion shows will move to the Orpheum Theater, which has a location in both cities. "The proscenium setting allows us to change the scenery in a split second," Gansmoe said. "We can go to a blackout, and all of the sudden the lights come up and it's a completely different look on the stage, which is part of the magic."

The after-party, too, was "all about the magic," said Frost designer Dennis Remer. "It was about creating overall environments that were magical and visually intriguing for people. There was something happening everywhere you looked." Spread out over the store's seventh floor, the party offered a variety of settings that took visual cues from everything from Avatar to The Wizard of Oz and the ocean floor; the archives area became what Remer described as a "trippy poppy den." 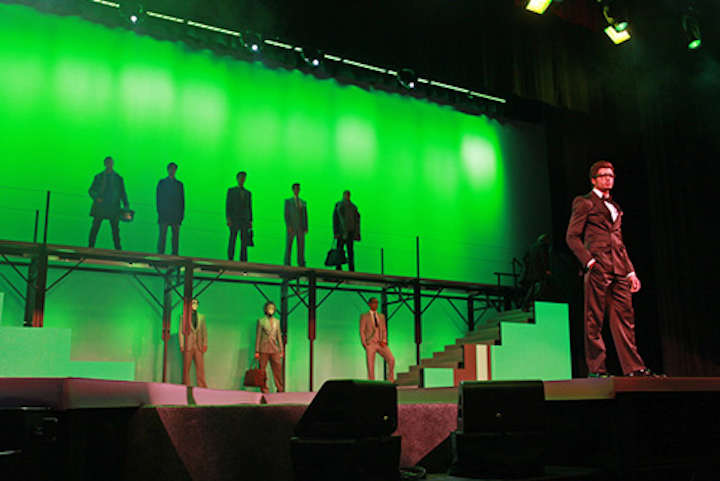 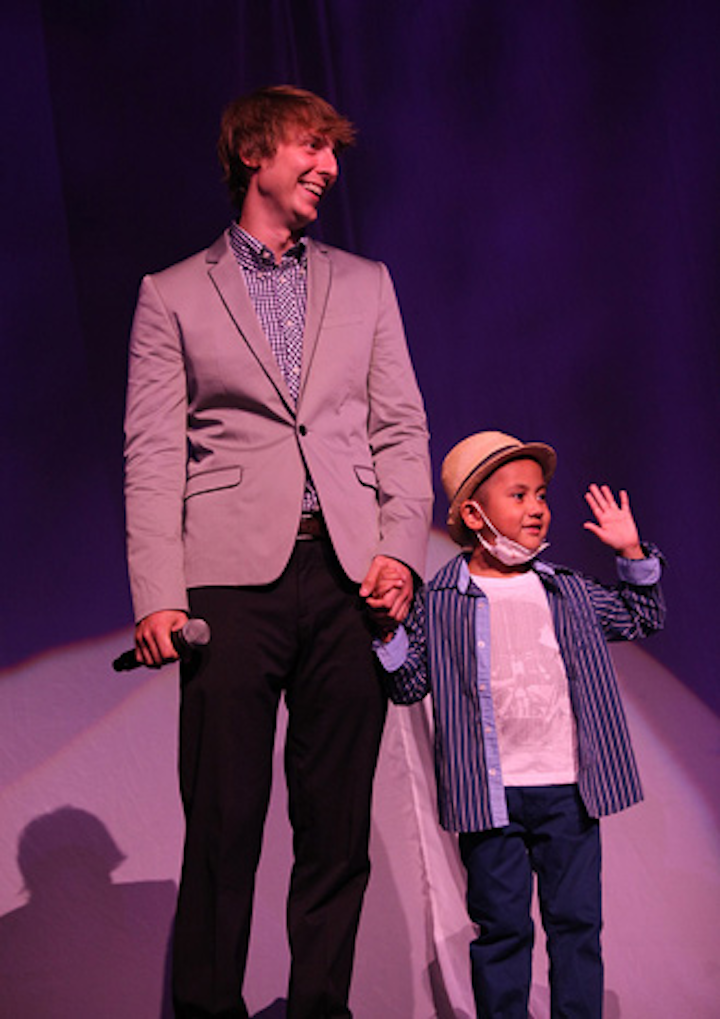 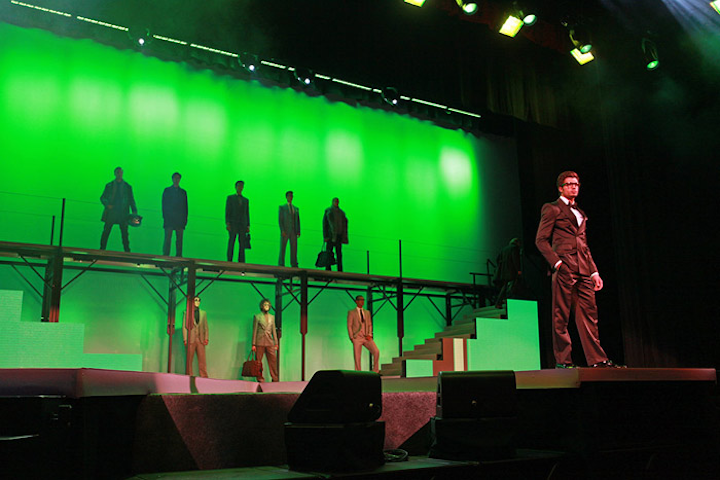 The show's backdrop was a 40-foot-wide by 50-foot-tall LED screen. "It was the largest LED wall we've ever done in the show, and that was a high technological achievement for us," said Macy's Mike Gansmoe.
Photo: Barry Brecheisen for BizBash 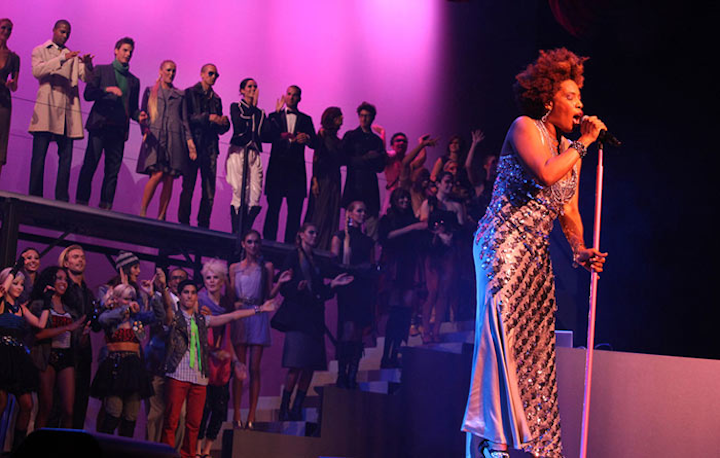 Headliner Macy Gray closed the show with a performance that included her hit song "I Try."
Photo: Barry Brecheisen for BizBash 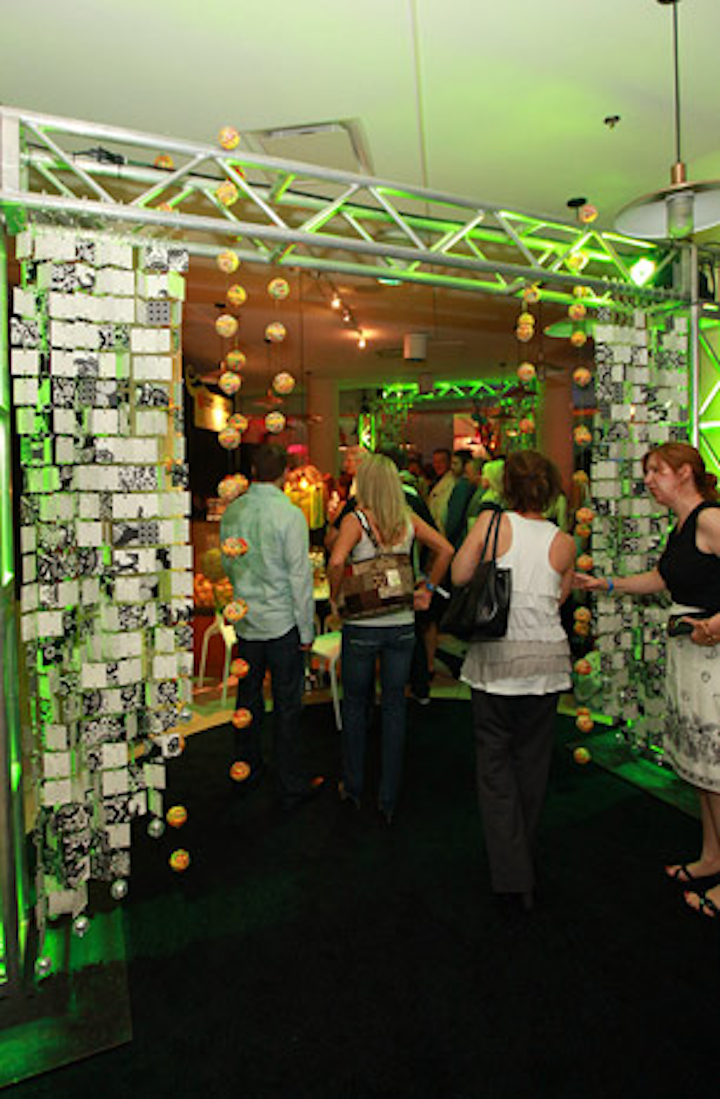 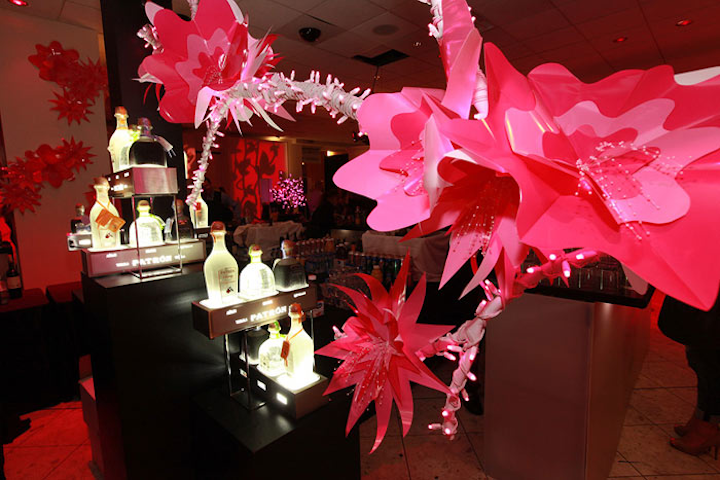 In the department store's archives area, Frost designer Dennis Remer used illuminated pink flowers to create what he called "a sort of trippy poppy den or a Jack and the Beanstalk experience."
Photo: Barry Brecheisen for BizBash 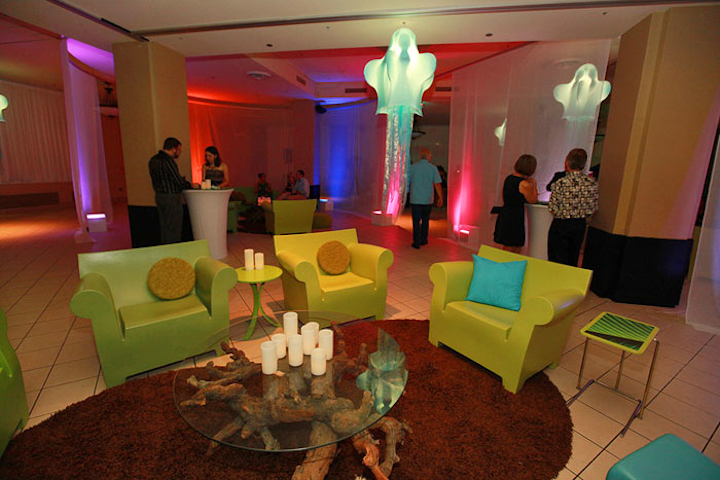 In the Narcissus room, the inspiration was "under the sea," Remer said. "Jellyfish were hanging around, and there were projections of sublime aquatic videos."
Photo: Barry Brecheisen for BizBash 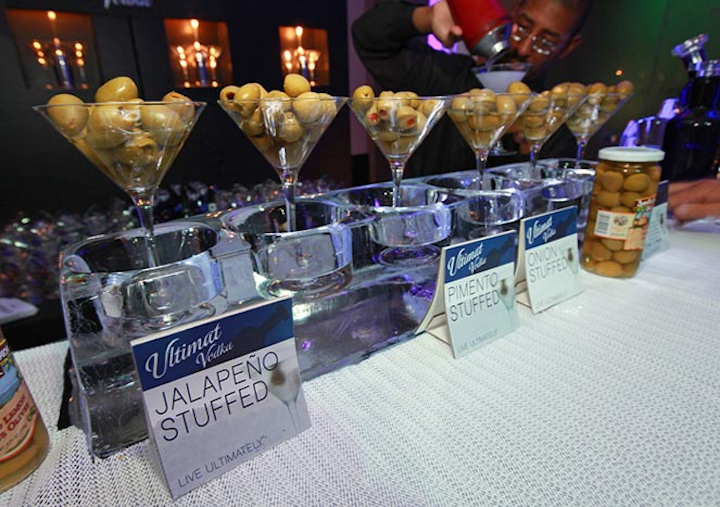 At Ultimat vodka's ice bar, guests could spruce up their martinis with selections from an olive buffet.
Photo: Barry Brecheisen for BizBash 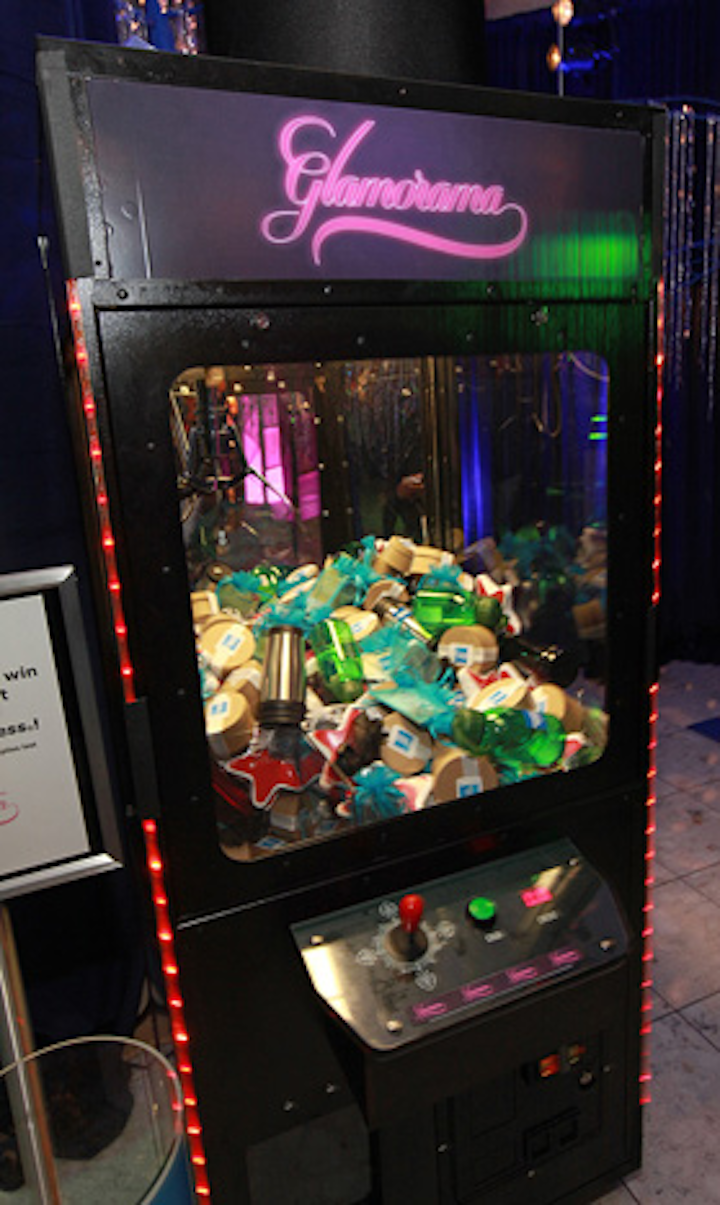 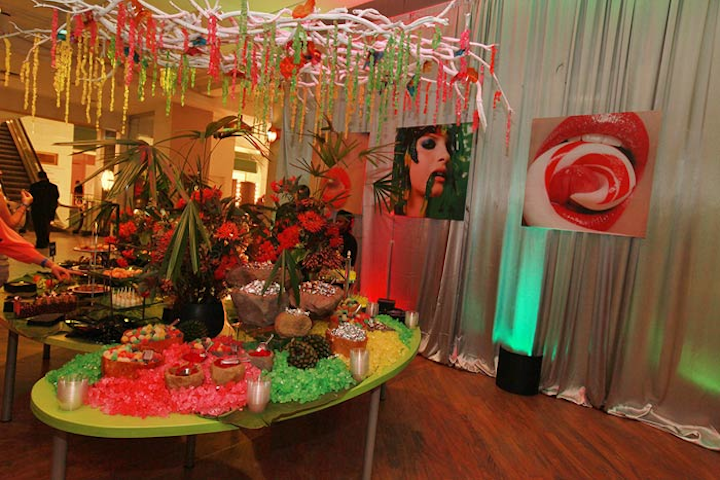 A so-called "candy garden" offered treats ranging from See's chocolates to gumdrops and miniature cones stuffed with s'mores. Manzanita branches dripping with sugar crystals "called out that this was the sweet, sugary station," Remer said.
Photo: Barry Brecheisen for BizBash 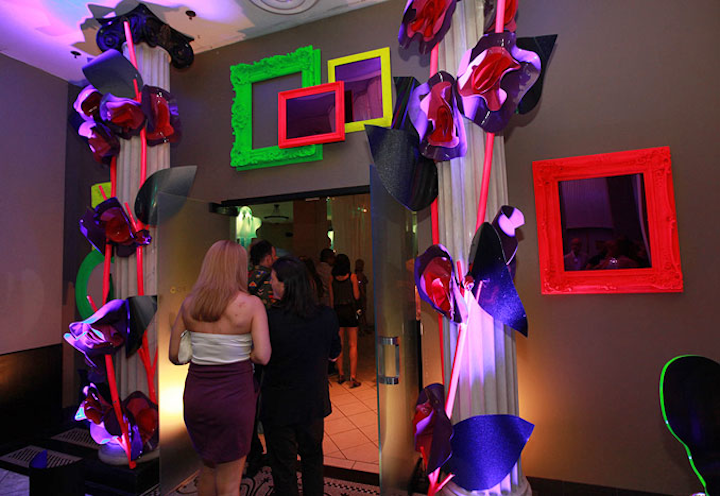 Black lights bathed the area outside the Narcissus room, where fluorescent frames and flower vines played into the decor.
Photo: Barry Brecheisen for BizBash
More in Chicago