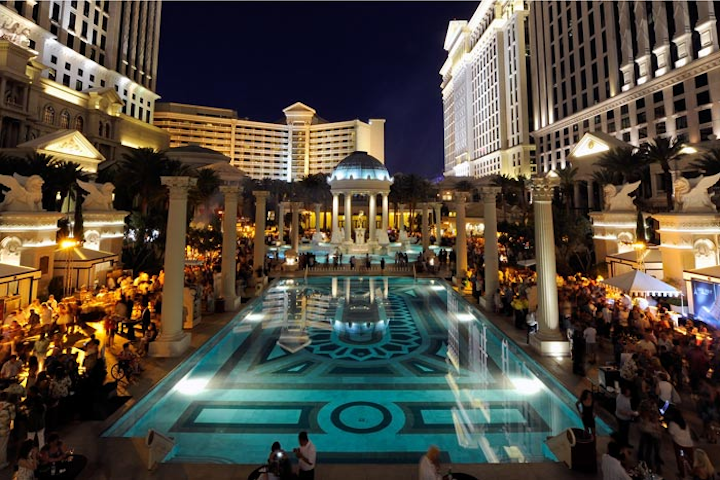 It's been years since Las Vegas firmly dispensed with its old reputation as the home of the greasy $0.99 steak-and-eggs brunch, but each new restaurant opening backed by a big-name chef—for instance that of Gordon Ramsay Steak last week—puts another nail in the coffin of that outmoded distinction. Further advancing the city's new reputation as a bona fide, world-class foodie destination is the annual Vegas Uncork'd by Bon Appétit magazine, which just wrapped after taking over town from May 10 through 13, offering an array of meals, tastings, and even a poker tournament.

The centerpiece of the program is the event's Grand Tasting, now in its sixth year, which set new attendance records. Selling out in advance for the first time, the event drew more than 2,500 people who took over the Garden of the Gods pool at Caesars Palace, tasting items from the town's most notable chefs and restaurants. Included were chefs from Bellagio, Caesars Palace, the Cosmopolitan of Las Vegas, and Mandalay Bay. Making his debut appearance, Ramsay offered his beef wellington and sticky toffee pudding. Guy Savoy, José Andrés, Hubert Keller, Nobu Matsuhisa, David Myers, Scott Conant, Michel Richard, Costas Spiliadis, Todd English, Rick Moonen, Charlie Palmer, Mary Sue Milliken, and Susan Feniger and others also prepared favorites from their Vegas eateries.

“I’m thrilled that we not only had the most people ever attend the Grand Tasting but we also had more restaurants participate than ever before—making this a bigger showcase for Las Vegas than in any other year,” Bon Appétit editor in chief Adam Rapoport said in a statement.

Vegas Uncork’d kicked off the weekend with Wolfgang Puck hosting an intimate lunch with Rapoport at the Forum Shops at Caesars Palace in celebration of Spago's 20th anniversary. And the four-day culinary programming wrapped on Sunday with Mother’s Day brunches from Charlie Palmer, Guy Savoy, and Rao’s.