Why Gender Became a Focal Point at These National Geographic Events

The network hosted screenings in Washington and New York for its latest documentary about gender identity and sexuality.

National Geographic hosted two separate movie premieres for its latest documentary, Gender Revolution, last week in Washington and New York. The network is no stranger to producing documentaries and using premiere parties to promote the films prior to their network debuts. Those events traditionally follow the company’s go-to format: screening and discussion panel followed by a big party. This time, the two-city premiere events altered the format to tailor it to the movie’s subject matter of gender identity and sexuality.

Since the 400 attendees would be arriving straight from work to National Geographic's headquarters in downtown Washington, the evening began with cocktails and heavy hors d’oeuvres followed by the 90-minute movie screening, a 20-minute discussion panel, and a dessert reception. The New York premiere at the TimesCenter followed this same program.

“We didn’t feel like a party atmosphere was appropriate for this film,” said Chris Albert, executive vice president of communications at National Geographic who led the events team in producing both screenings. “It's more thoughtful and warrants conversation, so we thought after the premiere would benefit from something more low-key but still allow people to continue the conversation.”

Albert worked with RJ Whyte Event Production in Washington and 15/40 Productions in New York to produce the events. The teams forwent the standard red carpet for a custom black carpet with “Gender Revolution” in rainbow colors, the main color scheme for the food and decor.

Rainbows dominated the food and decor for the dessert reception in both cities. In Washington, Fluffy Thoughts Cakes created a seven-tiered cake with all white icing that upon cutting, revealed seven layers in each color of the rainbow along with a table of macarons of the same colors. In New York, Albert opted for a candy bar from Hollywood Candy Girls in the same palette.

The standout element at both events, though, was the Gender Revolution message wall. Before the screening, the white wall with the hashtag #GenderRevolution emblazoned across the middle served as a decor element. Afterward, event producers brought out paint and markers for guests to decorate the wall. A mixture of handprints and empowering statements about sexuality and gender identity covered the wall by the events’ end.

“It really brought everyone together after the screenings,” said Albert, who added that a line formed to write messages at both events. “I was so pleasantly surprised how people were drawn to it.”

The panels in both cities included a mix of experts in the field of gender study, participants in the film, and journalist Katie Couric, who conducted the interviews in the film. “This is able to put a face to these stories and show that we are all people,” said Albert. “It exemplifies how everyone in the film has a personal story and it's our job as National Geographic to share these stories.”

National Geographic has hosted other premieres in Washington, where the network is headquartered, including its last feature film, Before the Flood with Leonardo DiCaprio, at the South by South Lawn event at the White House last September.

Gender Revolution premiered on February 6 on the National Geographic Channel. 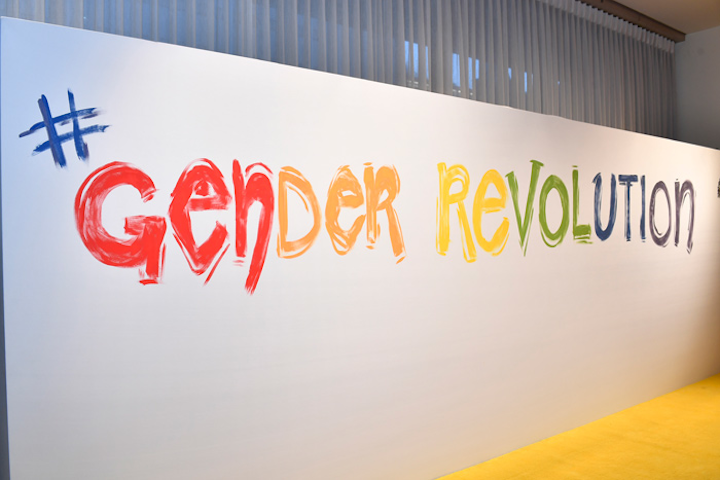 Design Foundry painted the movie’s hashtag in rainbow colors on the message wall for the Washington premiere.
Photo: Courtesy of National Geographic 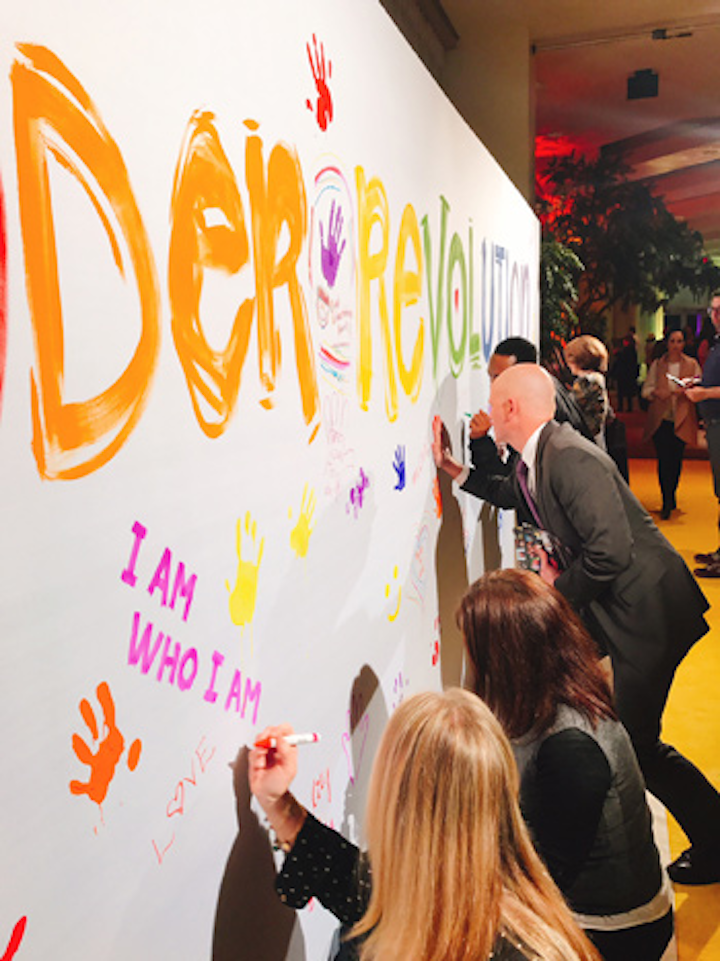 Guests used paint and markers to write, draw, and leave handprints on the wall after the screening.
Photo: RJ Whyte Event Production 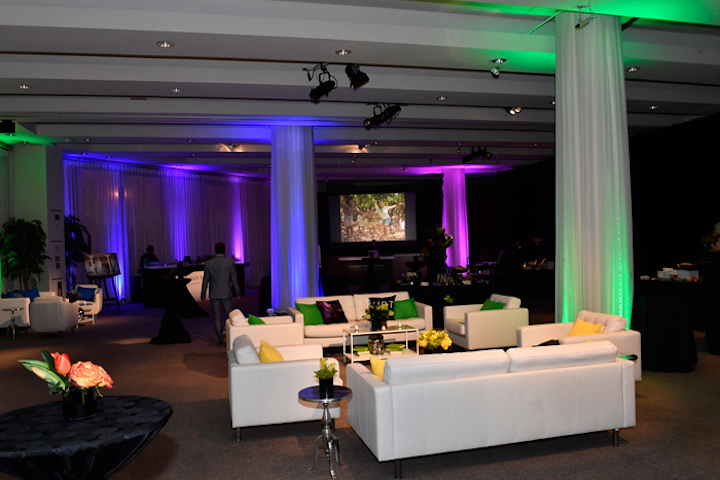 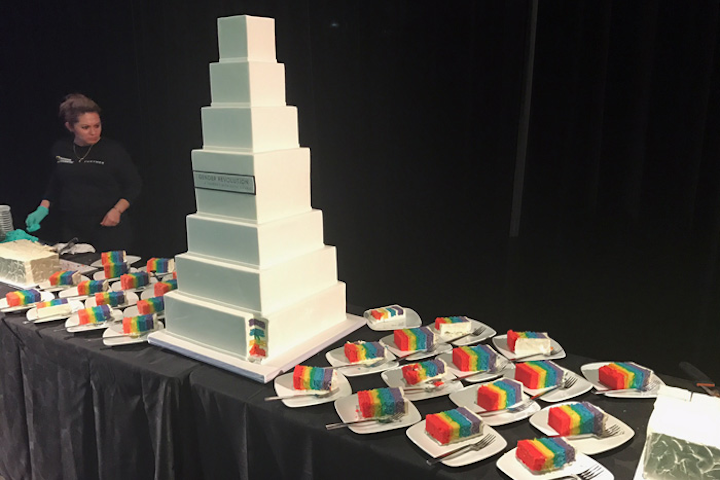 Fluffy Thoughts Cakes made each tier of the pyramid-style cake out of individual layers in each color of the rainbow for the Washington dessert reception.
Photo: RJ Whyte Event Production 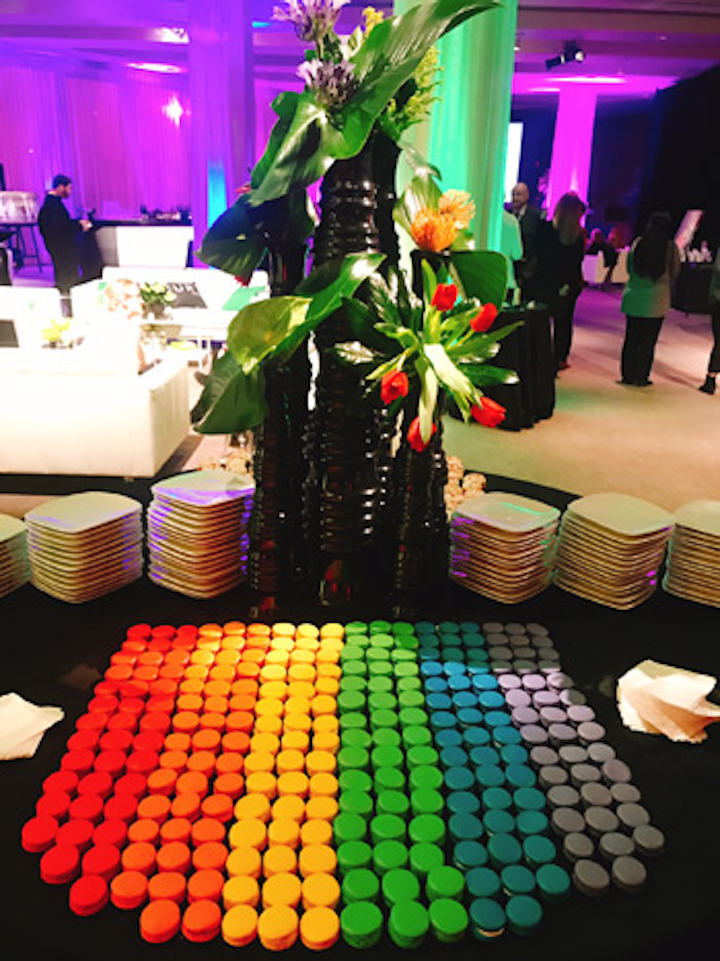 Fluffy Thoughts also set up a table with macarons in each color, and flavor, of the rainbow.
Photo: RJ Whyte Event Production 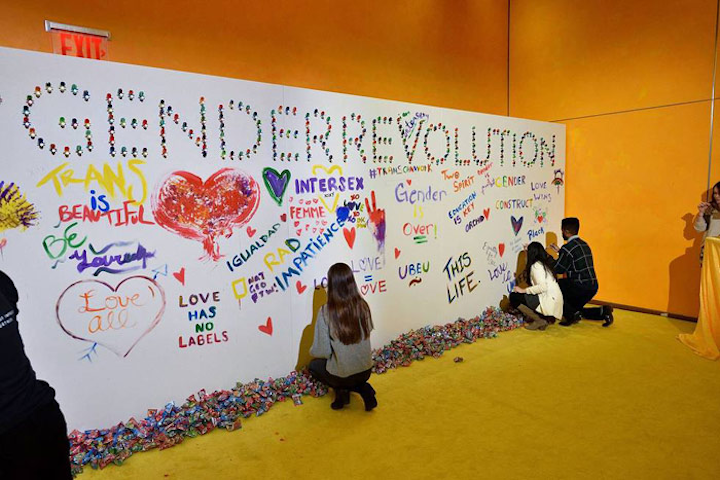 In New York, 15/40 Productions used candy Ring Pops to spell out #GenderRevolution on the message wall. Additional packaged pops sat on the floor for guests to take.
Photo: Courtesy of National Geographic 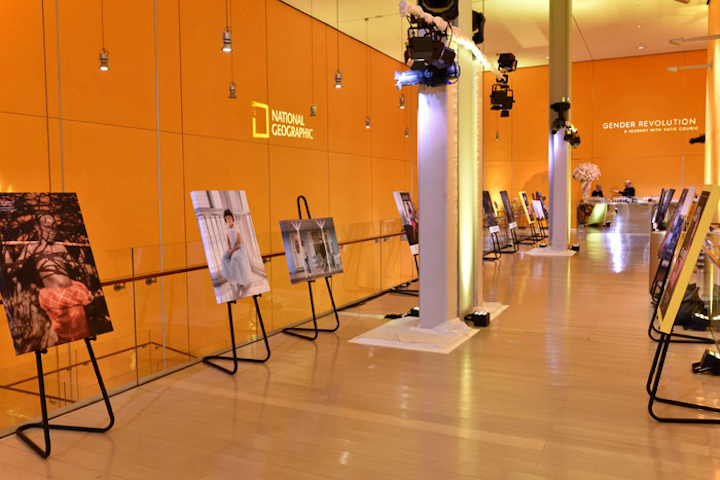 Photos of from the gender feature story of National Geographic’s January issue lined the hallways of the TimesCenter outside of the main theater at the New York premiere.
Photo: Stephen Smith/NatGeo/PictureGroup
More in New York City & Tri-State Area