Sony Electronics partnered with artist Kaz Shirane to celebrate the launch of its A1E Bravia OLED TV with an audiovisual art exhibit. 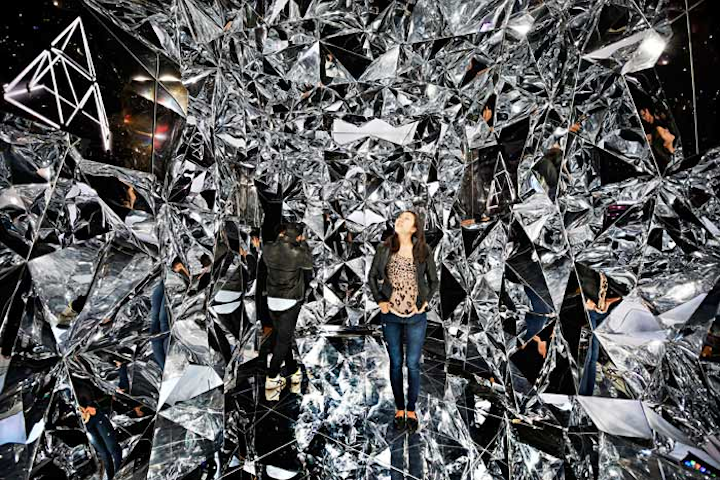 The audiovisual tunnel was created with reflective geometric panels and six of Sony's A1E Bravia OLED televisions, which broadcasted images including 3-D triangles that resembled the installation's design.
Photo: Courtesy of Sony

To celebrate the launch of Sony Electronics' A1E Bravia OLED TV, the company recently partnered with Tokyo-based artist Kaz Shirane to create an immersive art tunnel that showcased the new television's technology. The exhibition, which was called "Evolve," came to Westwood Gallery in New York from May 5 to 7.

As the concept of the installation was to redefine the boundaries of light, sound, and space, Shirane designed the site-specific tunnel with reflective geometric panels that projected light spectrums. Sony provided six televisions for Shirane to broadcast original video of changing colors and galactic imagery, which contributed to the visually abstract experience.

Attendees were invited to walk into the tunnel for the audiovisual presentation, which lasted around three minutes. They were encouraged to take photos and videos on their phones, as well as pose for a camera installed in the installation, which took photos that were available for social sharing on tablets in the gallery.