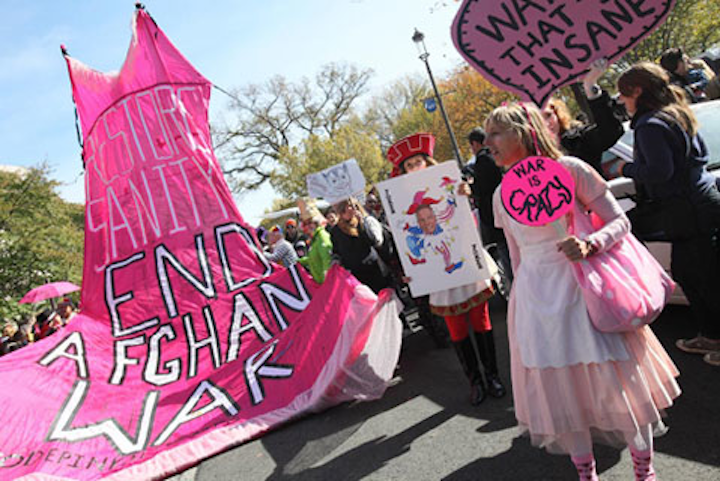 Photo: Tony Brown/Imijination Photography for BizBash
With more than 200,000 Comedy Central fans—by some estimates—descending on the National Mall for Jon Stewart and Stephen Colbert’s Rally to Restore Sanity and/or Fear on Saturday, event industry watchers might have expected Washington to be flooded with marketers eager to piggyback on all the media attention. However, this weekend’s rally was noticeably free of promotions or activations.
We asked a few experiential marketing professionals why that might be. They emphasized that a big part of guerrilla marketing is accepting that not every event with a large audience is a good opportunity for exposure.
“It’s a big deal right now to respect that people don’t always want to be marketed to,” said Andrew Loos of Attack! Marketing. “This was such a unique event, and even though it was billed as nonpolitical, it did have a political bent to it. The people who came were very passionate, and they really wanted to focus on what was going on.”

Trying to distract these passionate attendees with a product, said Loos, could backfire and harm a company’s image. Darren Andereck of XA, the Experiential Agency, concurred. “I wouldn’t advise doing any kind of handout or swag at this event,” Andereck said. “It can be counterproductive, because people may be annoyed and think, ‘Hey I’m at a political rally and you’re trying to take advantage of me by selling me something.' They’re there for a particular reason, and they don’t want to dilute their focus on your brand.”

Red Bull and Ford did end up benefiting from the rally, without having to step foot on the mall. The energy drink maker staged a Washington edition of its Soundclash concert series, an event co-sponsored by Ford, two blocks away on Pennsylvania Avenue several hours after the rally ended. The concert, scheduled months prior to the rally, ended up attracting nearly 2,000 people, many of them wearing merchandise purchased at the rally.

Of course, even if marketers wanted to establish a presence at the rally, the nation’s capital isn’t always as advertiser-friendly as the streets of New York or Los Angeles. “D.C. can be a little tricky,” said Jessica Murphy of the Michael Alan Group. “They have a very strict rule against any kind of advertising on the National Mall itself. We’ve had clients come to us in the past to try to reach the crowds at Screen on the Green and other events, but you just can’t do any type of advertising on the mall itself.”

Murphy noted that her firm has still been able to target events here, but it requires reaching attendees before they get to the mall. Even then, marketers agree that any kind of promotion at an event like this weekend’s rally would be a delicate endeavor.

“It would really have to be the right brand,” said Loos. “And it would have to be done in a very D.I.Y. fashion that didn’t take the focus off of the event.”   Perhaps the only brand—aside from Comedy Central and The Daily Show, of course—that did gain leverage from the rally was the Huffington Post, which provided free bus transportation for 10,000 New York-based attendees. That move earned the Web site a good deal of media attention and engendered goodwill among participants, without being seen as overly promotional.

“That tied them to the rally in a way that didn’t distract at all from the event,” Loos said. “It was a smart move."