Bringing the Outdoors In

Tuesday evening at 583 Park Avenue, the Horticultural Society of New York hosted its Flowers & Design benefit showing off an array of tabletop designs that played up this year’s garden-party theme. Thirty-one floral and event designers, each given a table to embellish with flowers and decorative trimmings, filled the airy, open space with an array of outdoor effects.

The primary reason that Maureen Ferry, the Horticultural Society of New York’s director of special events, chose the venue is because it “feels like a raw space, even though it isn’t a raw space—it’s spacious and open with light-colored walls, and we’re able to get all of the tables on one level.” Ferry oversaw the event and worked with its design chair, former Metropolitan Museum of Art event chief Chris Giftos.

With a few exceptions (like Antony Todd’s golden pavilion-like structure), most designers went for literal interpretations of a garden party that incorporated alfresco looks. Treelike constructions appeared frequently, like the realistic tree trunk by David Beahm topped with branches of cherry blossoms and azaleas, with a base of flowers growing from the bark. Susan Edgar’s take on a tree used strands of ribbon and seed packets as foliage and decorations of birdhouses and lanterns. Tabletop accessories spotted around the event included miniature terra-cotta pots (used as votives), slabs of slate as chargers, lamb’s ear leaves as votive coverings and napkin rings, and watering cans as vases.

Three hundred twenty-five guests dined at the garden-decked tables on poached jumbo prawns and sweet-corn succotash with potatoes and field greens, followed by an entrée of dry-aged strip steak with green peppercorn sauce, asparagus, and thyme-scented Yukon potatoes. Dessert offerings included strawberry shortcake made with Grand Marnier and a selection of petit fours. The benefit, which honored interior designer Charlotte Moss, earned $375,000 for the organization. 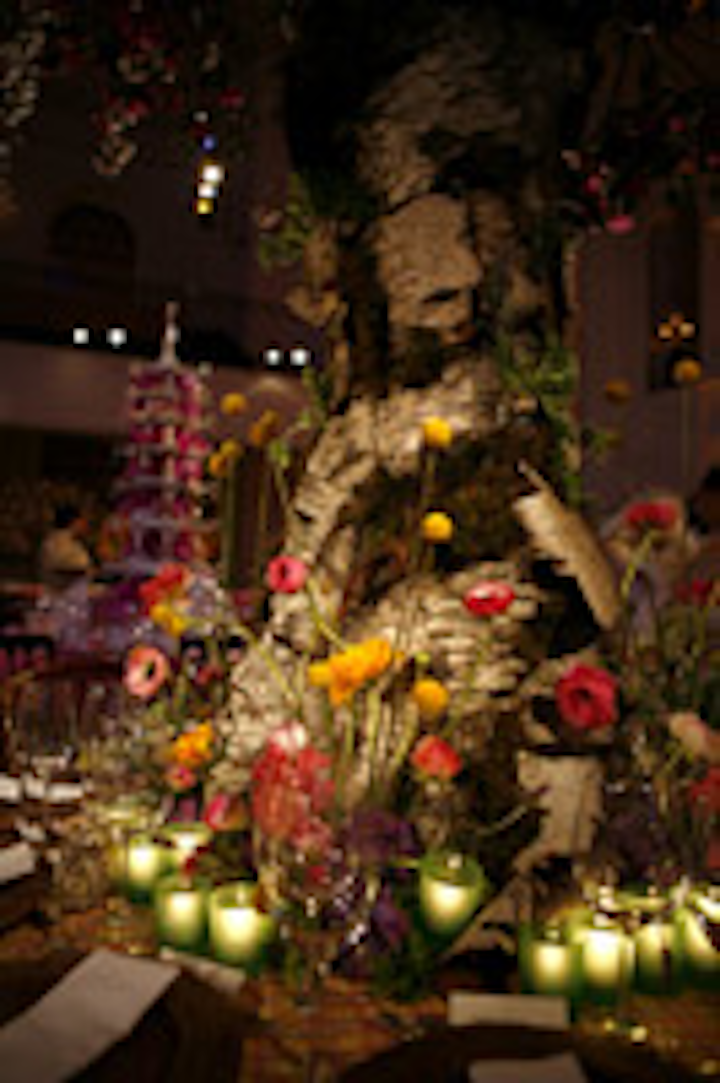 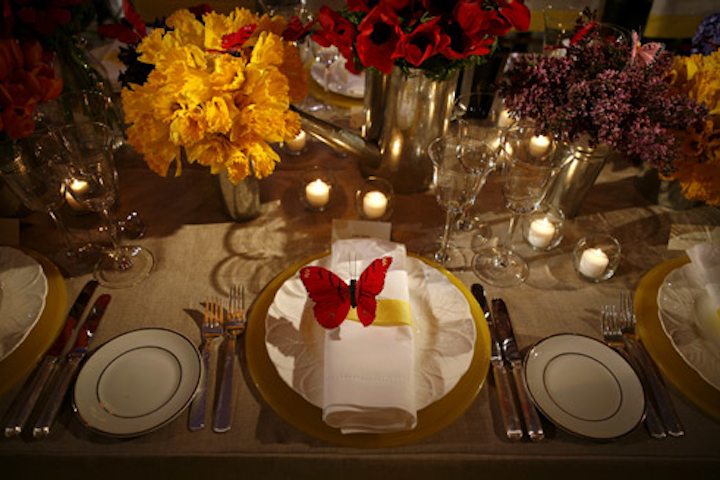 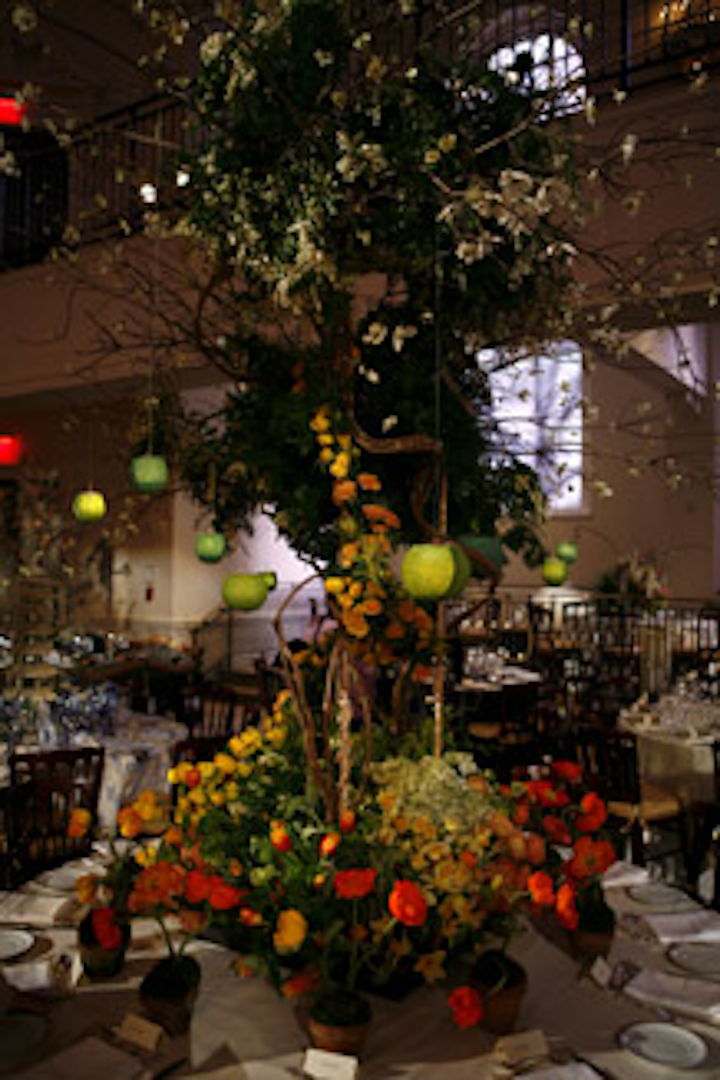 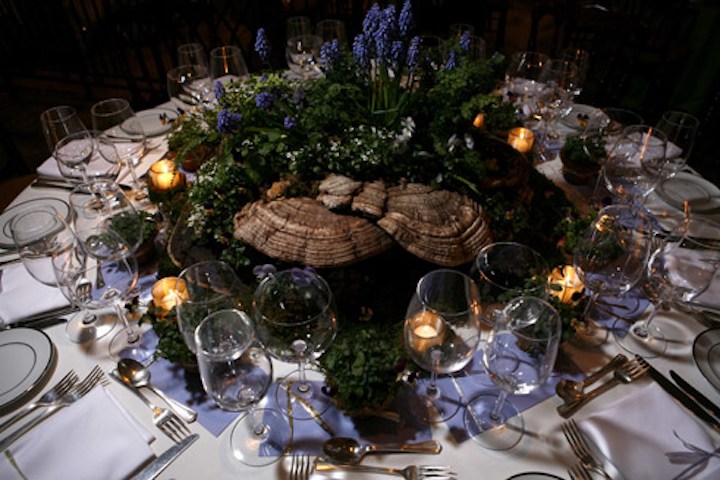 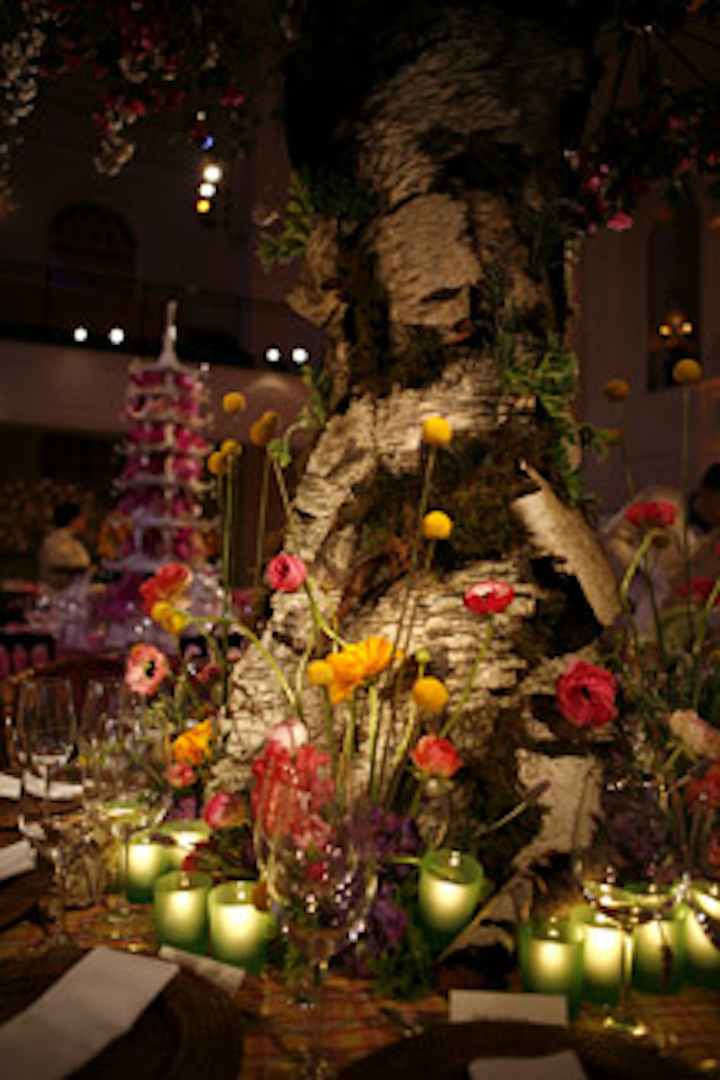 David Beahm crowned his table with a realistic tree bearing azalea and cherry-blossom branches. Spring flowers sprouted around the base of the trunk, which was also surrounded with green votives. A plaid tablecloth, rattan chargers, and bamboo chairs added to the alfresco look.
Photo: Joe Fornabaio for BizBash 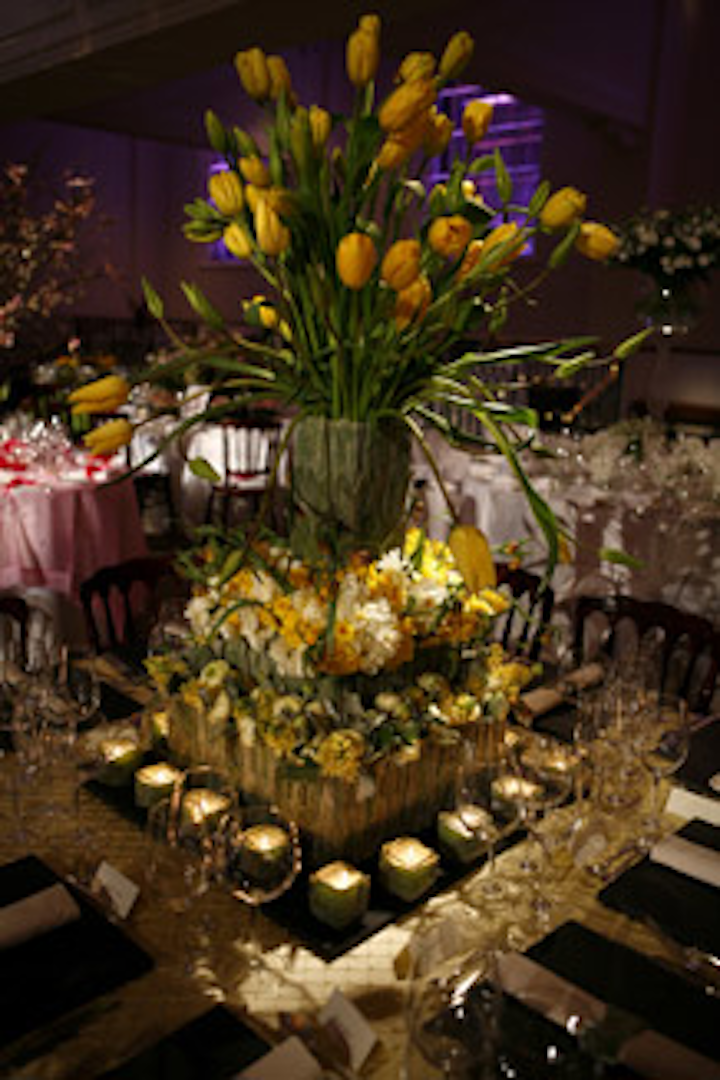 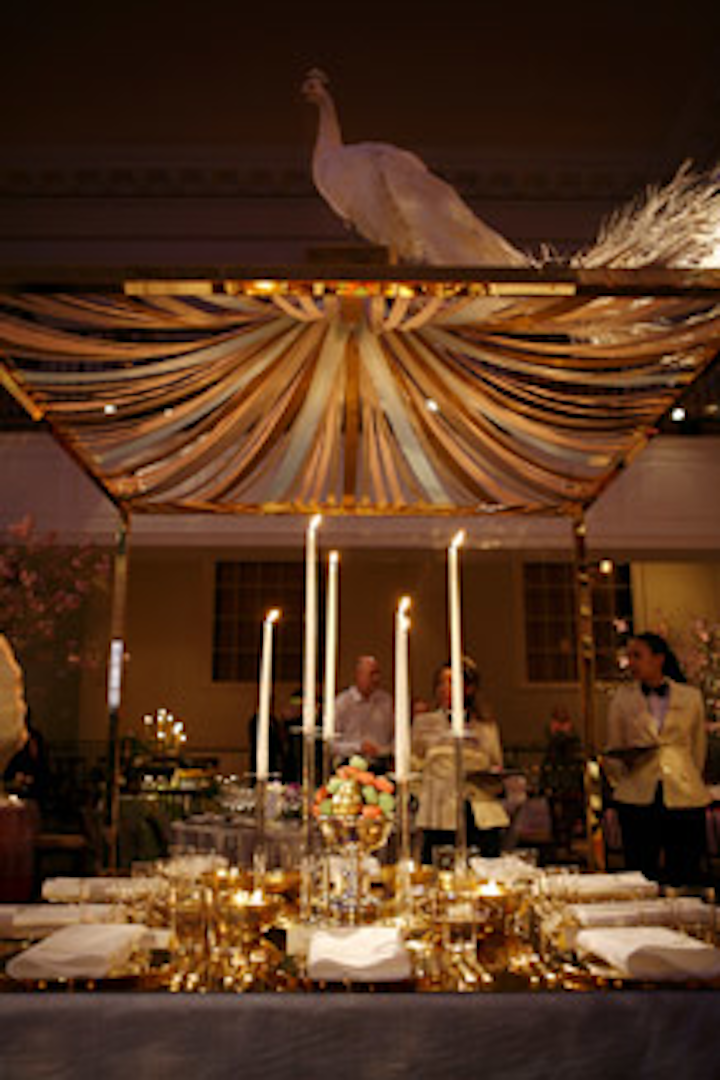 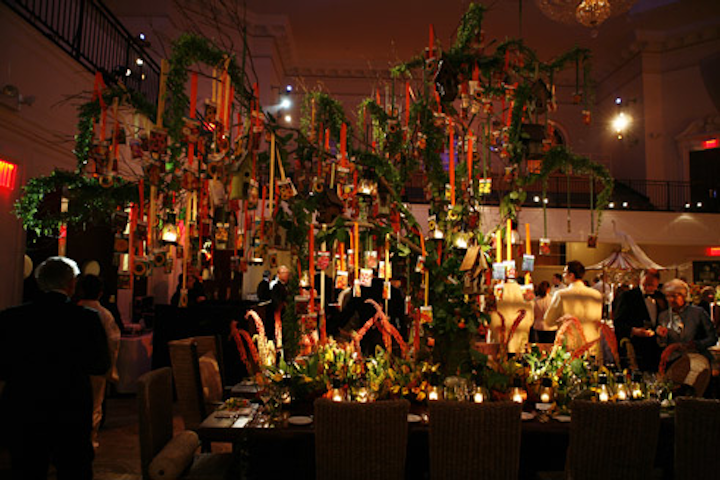 Flowers, Sticks, and Stones' interpretation of a tree featured seed packets on strands of ribbon, hanging lanterns, and birdhouses. Colorful foliage covered the base of the tree, extending along the banquet table.
Photo: Joe Fornabaio for BizBash 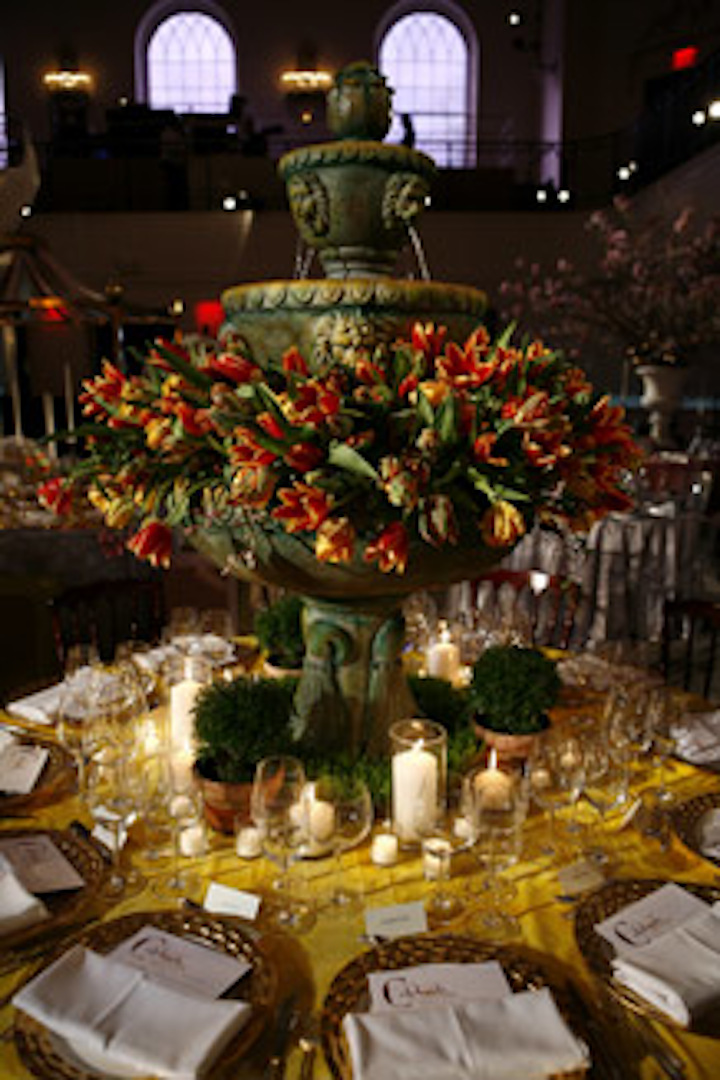 Celebrate Flowers' table had a large working fountain filled with dozens of flame-hued tulips. Wheatgrass and mini topiaries surrounded the base of the fountain.
Photo: Joe Fornabaio for BizBash 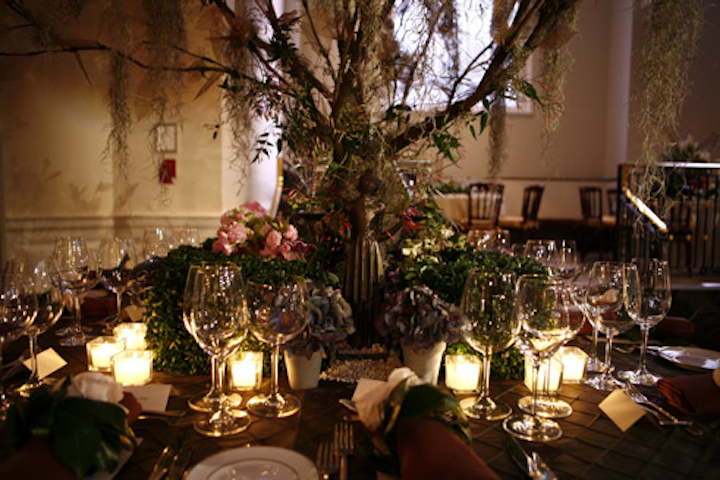 The public squares of Savannah inspired Gotham Gardens' table. In the center of the table, designers surrounded a Spanish-moss-draped tree with a miniature park setting, complete with shrubbery and tiny benches.
Photo: Joe Fornabaio for BizBash
More in Floral