Sexing Up the City

Thousands of fans showed their support at Sex and the City\'s sparkly—and wet—New York premiere.

Courtney Thompson
Presenting his movie to a rowdy audience of 2,800 guests inside Radio City Music Hall last night, Sex and the City writer and director Michael Patrick King said, “Sex is back where it belongs—in New York City.” (Cue the screaming and applause.) And one didn’t have to search long for evidence that New York was ready for the HBO show's characters to return. Outside, on the hall’s rain-drenched cross streets, thousands of mostly female fans waited, barging into barricades, cursing cops, and screeching for the droves of celebrity attendees.

The pre-event hype seemed to have a mushroom effect (The Post reported that one woman lost $22,000 in a ticket scam), with thousands coming out for the premiere, including many a crasher donning ode-to-Carrie ensembles. Expecting a huge turnout, studio New Line booked a backup theater in advance for overflow guests (The Daily News said others jilted got vouchers for weekend showings).

Clearly the return of Sex and the City was going to be a spectacle in its hometown. But even the premiere's planners and staffers seemed in awe of the crazed (some might say fanatical), bursting-at-the-seams atmosphere.The event team addressed a looming threat of rain just 24 hours before the big night. Working with New Line vice president of special events Maggie Swisher, 15/40 Productions president Craig Waldman created a raised platform for the 300-foot sparkling pink carpet, allowing for precipitation to soak the streets, and not Sarah Jessica Parker’s feet. Waldman also made the last-minute decision to put a tent on the carpet, choosing one with clear siding that let the legions of gawkers see the likes of Mary J. Blige, Fergie, Donald Trump, Ashley Olsen, Anna Wintour, and Jerry Seinfeld make their way through the massive press line.

Logistics aside, the screening’s arrivals area screamed Sex from the get-go. Some 200 pounds of Swarovski crystal dotted the hot pink carpet, and gone was the standard step-and-repeat, replaced by black crystallized drapery and shiny pink acrylic panels with the movie’s logo. “The look and design of the arrivals needed to go with the theme of the movie,” said Waldman, who worked on the screening and after-party’s design and production, while MAR Events’ Maria Ruiz focused on sponsor integration (there was a lot of it) and food and beverage. “We really went with a fashion-forward and sexy look, rather than the standard step-and-repeat.”

Rain affected the after-party, too, as much of the proceedings were originally slated for the Museum of Modern Art’s Abby Aldrich Rockefeller Sculpture Garden. Instead, about 90 percent of the party's fixtures moved inside the museum, with the raised white seating areas that had been reserved for the film’s leading ladies (which were supposed to the cover the garden’s pools) taking over the venue’s second floor.

As is often the case with events at MoMA, lighting was key to the party's look. Awash in swirling shades of pink (reminiscent of the Marie Antoinette premiere), the venue was easy to spot for the whittled-down guest list of 1,200, most of whom walked the three blocks from Radio City. Inside, the decor was all-white and mirrored, with a slew of seating areas, ranging from steel communal highboys to tufted pleather ottomans and faux suede high-backed booths. “We wanted to create a sexy setting,” said Waldman. “And when you come to MoMA, you don’t want it to look like a party—you want it to be more of an environment.”

The sparkly theme continued, with hot pink Swarovski crystal bits accenting all the tables, 500 heart-shaped crystals hanging from the hedges that lined the lower-level perimeters, and some 7,240 crystals making up a 160-strand, 12-foot-tall curtain that hovered near the main room’s staircase. Flowers by Oscar Mora—in all shades of pink and white—ranged from small and low centerpieces to a towering arrangement on the bar that mixed peonies, lilies, and orchids.

In terms of sponsors, Mercedes-Benz was ever-present in the arrivals area, dropping off the film’s stars in the brand’s new GLK luxury series. Swarovski blanketed the event from start to finish, while Vitamin Water flavors were doled out with free popcorn and passed around on silver trays at the after-party. Skyy was not-so-subtly placed in the film (spoiler alert: Carrie sates a broken heart while swigging straight vodka), and made an appearance in the character-themed signature cocktails of the evening—i.e., the Cosmopolitan Carrie, La Samantha, and the Classic Charlotte.

While the after-party’s main room was easy to maneuver and offered up freshly stocked buffets and bars, it quickly became known that the upstairs level was the unofficial V.I.P. room. Kim Cattrall, Kristin Davis, Cynthia Nixon, and Parker held court in their swank U-shaped banquette areas, which eventually became so clogged that beefy security guards required a personal invite to step up and schmooze (the ladies were only a few inches off the floor).

The night lost its steam when Parker said adieu around midnight—the same time all the bars ran out of champagne. As she exited her upstairs booth, hundreds of flashbulbs erupted from partygoers who seemed more interested in catching her picture than racing for the last remnants at the bar. 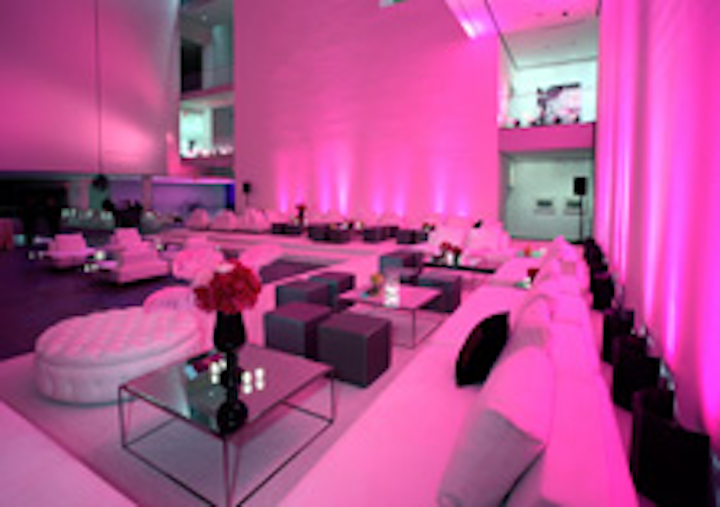 The Sex and the City after-party at MoMA
Photo: Line 8 Photography 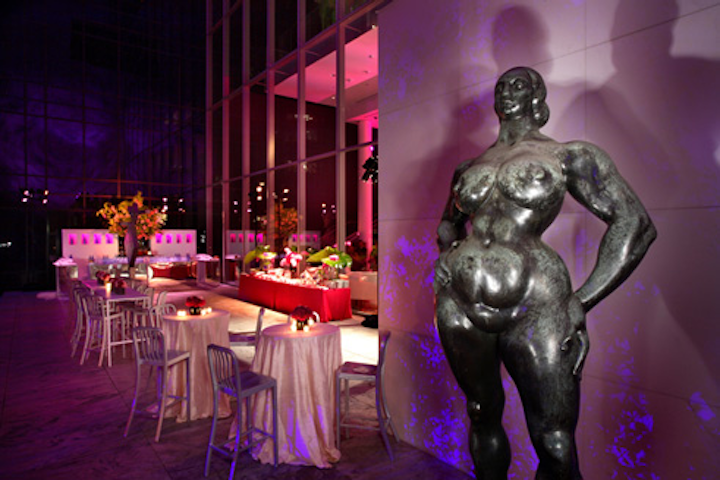 Though rain was a threat, some seating, a bar, and a buffet station were offered outside.
Photo: Line 8 Photography 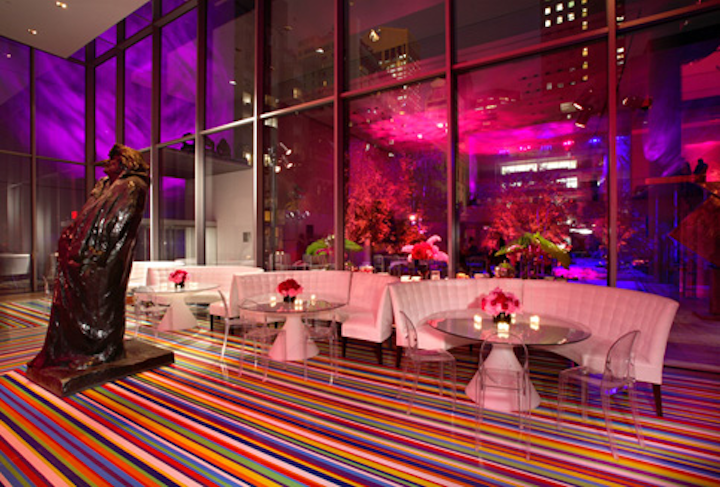 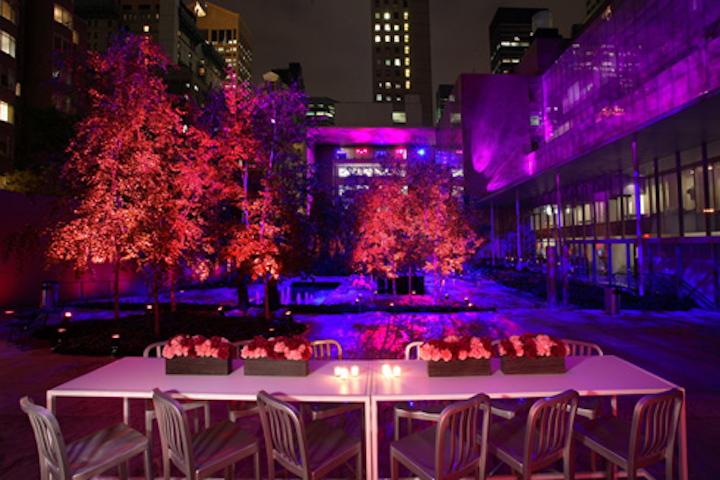 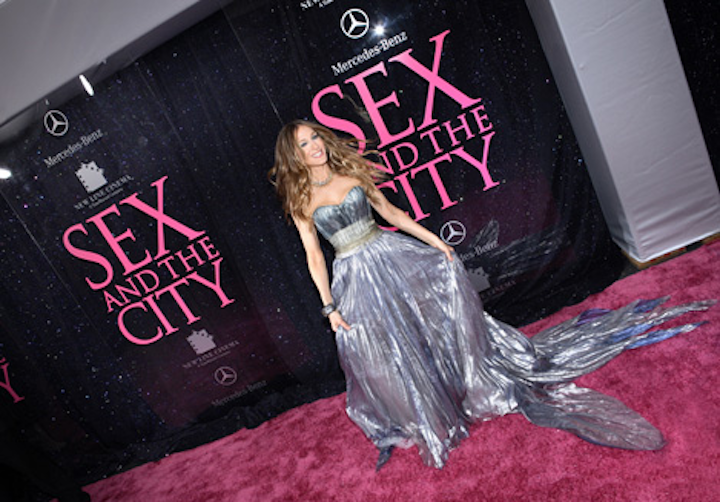 The fans crowded across the street from the pink carpet exploded when Sex and the City star Sarah Jessica Parker arrived.
Photo: Line 8 Photography 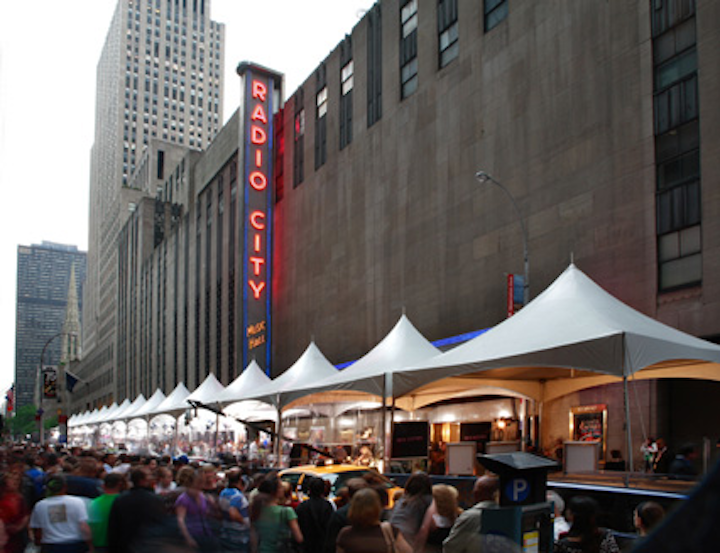 Thousands of fans crowded the streets surrounding Radio City, hoping to gain access to the screening or spot one of the film's stars.
Photo: Line 8 Photography 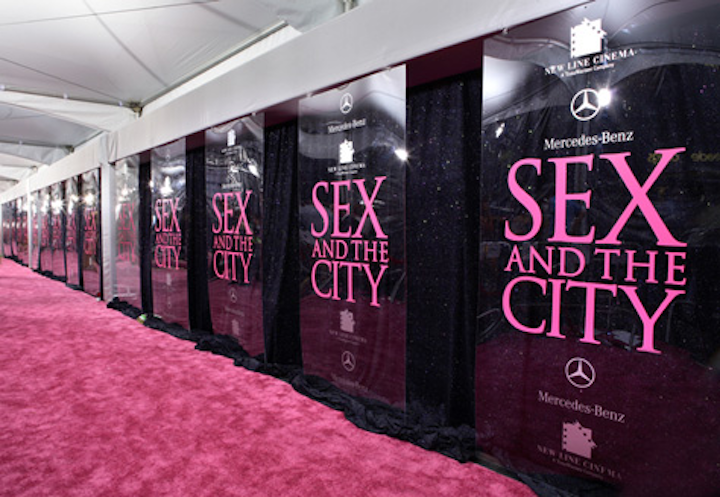 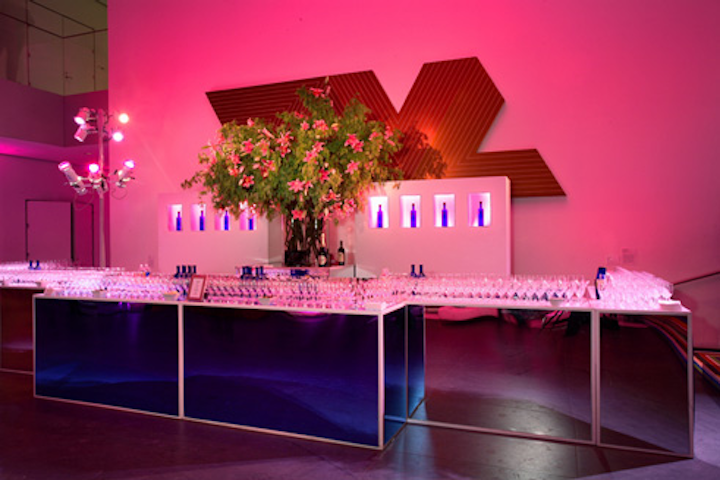 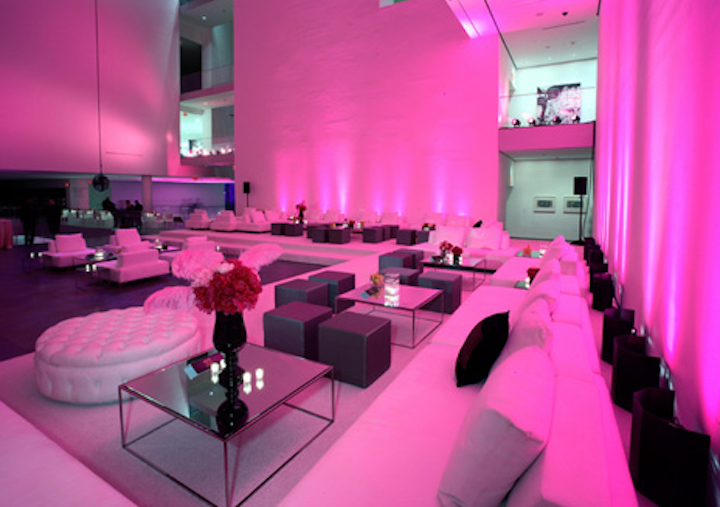 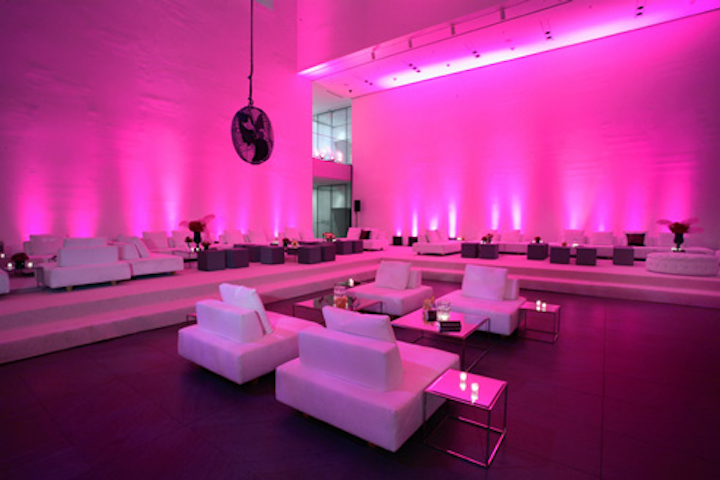