For its opening-night gala, the Los Angeles Opera transformed the Music Center Plaza into a setting evocative of an Italian town square.

With Los Angeles Opera's opening weekend celebration to kick off its 2008-2009 season, general director Plácido Domingo's collaborations with Hollywood directors reached a crescendo. The weekend featured classic and new works performed back to back, directed by three film industry giants: William Friedkin, David Cronenberg, and Woody Allen, in his maiden voyage on the opera stage.

Longtime board of directors gala chairwoman Mary Hayley designed the weekend of parties, and Jill Michnick, assistant director of development for special events, executed it with the help of Special Occasions Inc., which constructed the Italianate town square-style setting for Saturday's opening-night gala.

In a subtle nod to the film directors' usual milieu, the red carpet for the first event was edged with six-foot-high topiary letters spelling out the title of that evening's opera, "Il Trittico" by Puccini. The topiary touch was inspired by Vanity Fair's ficus formations in the shape of the magazine's name at its legendary Oscar party. "Il Trittico" (the triptych) is a collection of three one-act works, directed by Friedkin and Allen. The gala dinner that followed took its cue from Puccini's native Italy, where the operas take place.

The party took to the Music Center Plaza, which was enclosed by hedgerows. The entrance was flanked by Mark's Garden's majestic 10-foot-high arrangements of sunflowers and yellow and white roses. The cheery hue lit up the party interior as well, with smaller flower arrangements and gold-rimmed crystal and china topping butter-colored raw-silk cloths.

Tables for 530 guests surrounded a square formed by Romanesque arches uplit with soft, amber illumination; along the upper curves, the operas names appeared in lights, actually white neon letters created by Images by Lighting. Stretching out from each arch was a dance floor, for a total of four. Inside the arches, a four-piece band rotated slowly on a platform as it played standards designed to get the black-tie crowd on its feet.

Michnick said the point of the central design was to make each guest, who'd paid at least $1,500 for a seat, feel as though he or she had a good table. Along those lines, board chairman Marc Stern made remarks at one end of the party and then tossed the microphone to Domingo on the opposite side of the arches, where he introduced the evening's cast. “I want everyone to feel part of the party,” Michnick said.

Guests dined on a supper worthy of an Italian tenor, with an antipasti plate, pumpkin raviolini, filet of beef and a quartet of sweets, including a passion fruit panna cotta.

Sunday afternoon featured the U.S. premiere of Howard Shore's "The Fly," directed by Cronenberg and based on his 1987 science-fiction film. The new opera has a dark, gritty feel that wouldn't necessarily inspire a gala garden-party lunch such as the one for 170 that preceded the performance on the enclosed plaza. 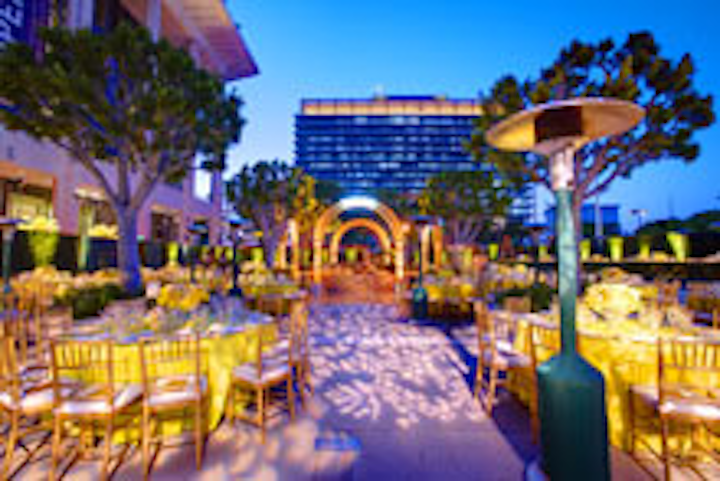 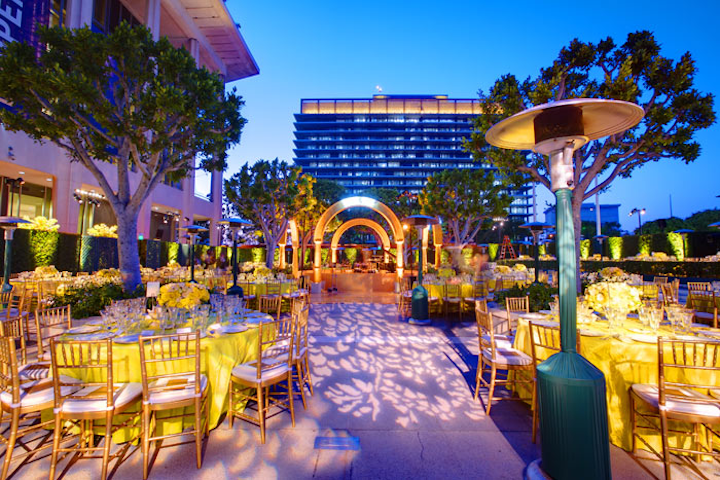 The opening-night gala got a look reminiscent of an Italian town square.
Photo: Alen Lin for BizBash 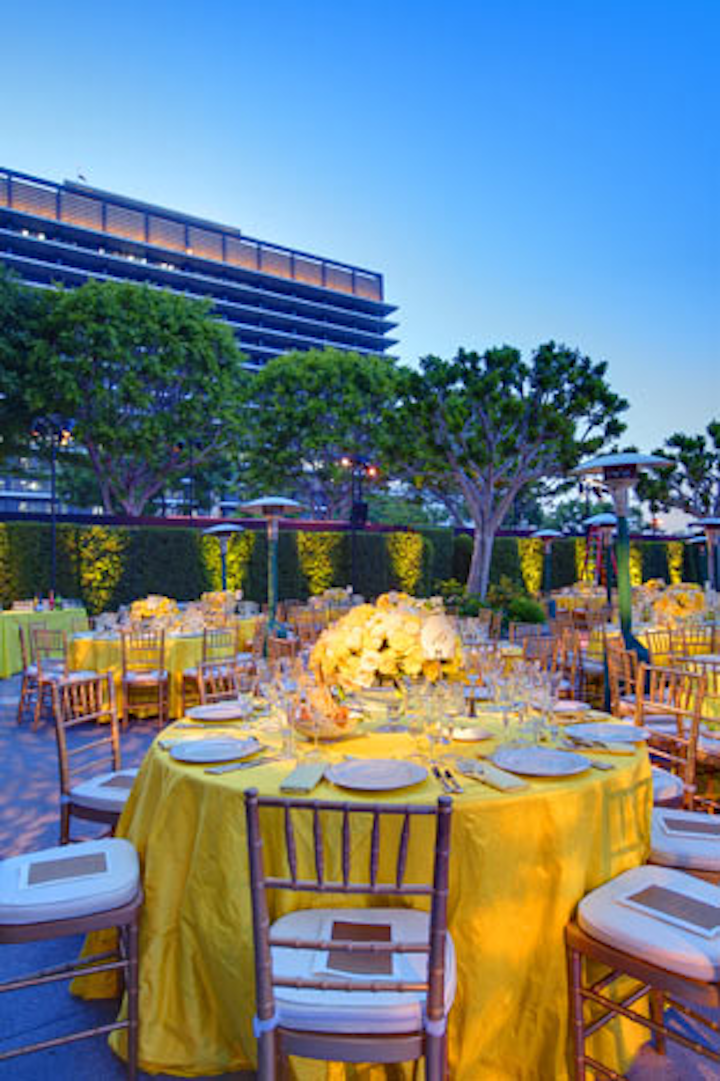 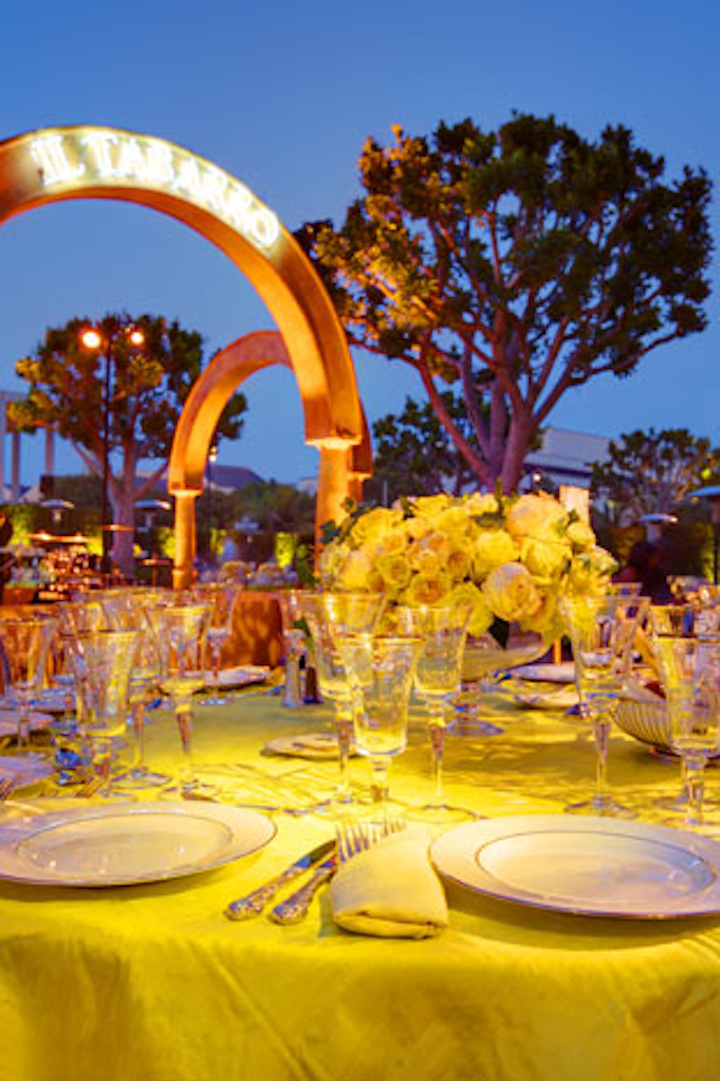 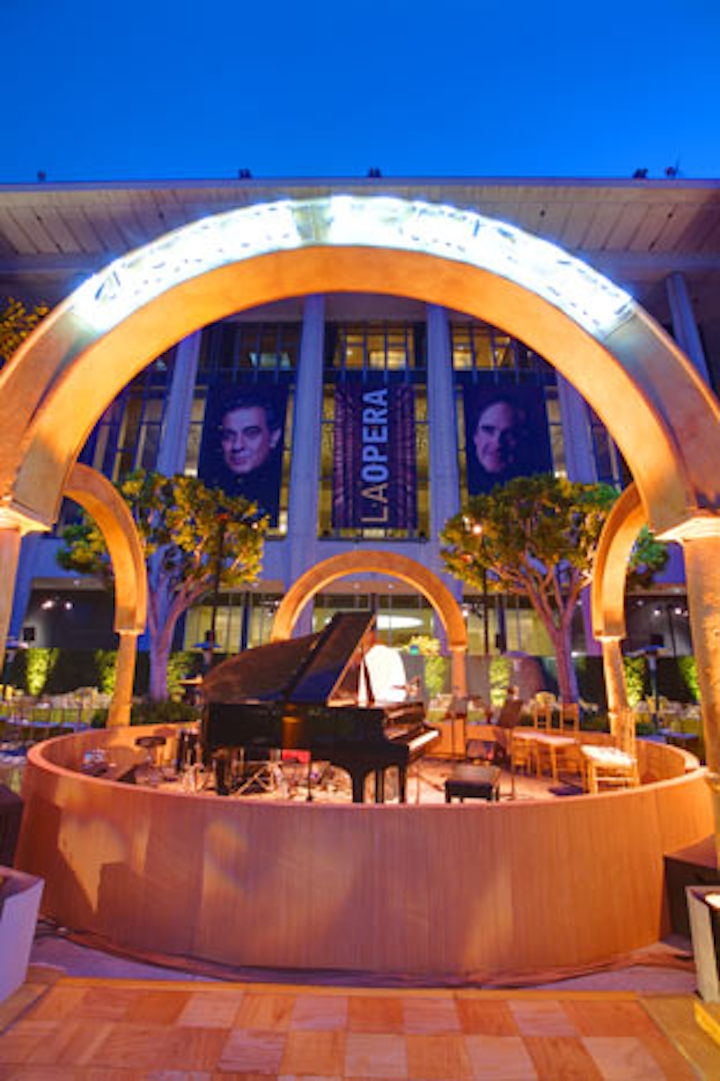