Most companies take a show-and-tell approach to anniversary events, flaunting business achievements with color-themed decor and stage presentations. But on Thursday, July 12, L.V.M.H.-owned beauty purveyor Fresh opted for a more hands-on style of celebration, marking its 21st year with a festive soirée in keeping with its playful sensibility. Held at Openhouse Gallery on Mulberry Street, the event invited guests to pour their own drinks, pick up plated dishes from an Automat-like display, and choose the items for their gift bags.

Florida-based Dazzle Creative Events produced the affair with the fragrance and beauty brand's senior director of communications Rose Pilato and the Fresh design team, which provided direction on style and aesthetic. "We wanted it to be an interactive event, where every component was sensorial, including the dining experience," said Dazzle's founder James Rota.

This included an interactive mixology bar and what was dubbed the "flavor wall." Shiraz Events catering director Michael Adasko worked with the Fresh team to create a selection of purées and infused juices that guests could pour themselves from individual tanks installed on one side of the room. After using the dispensers, which featured knobs inspired by the fragrance-dramming stations found inside the brand's Flatiron district store, guests could take their flasks to the bartenders, who used Belvedere vodka to create custom cocktails. The food, which included beef carpaccio, cold sesame noodles, potato pan-fried pierogies, and lobster rolls, was placed on shelves in a tall Plexiglass tower that stood in front of an open kitchen.

To work around the stipulation that no props could be mounted directly to the venue's walls, independent fabricators and designers Gray Stockmayer (one of the builders who created the display spaces for the Costume Institute's 2011 Alexander McQueen exhibition) and Michael Greathouse built a series of hanging systems from which custom wall panels were displayed. A mood-board-like wall of graphics to highlight the brand's evolution was erected in the rear of the venue and built on a framing system that employed tension and pressure to maintain its structure. 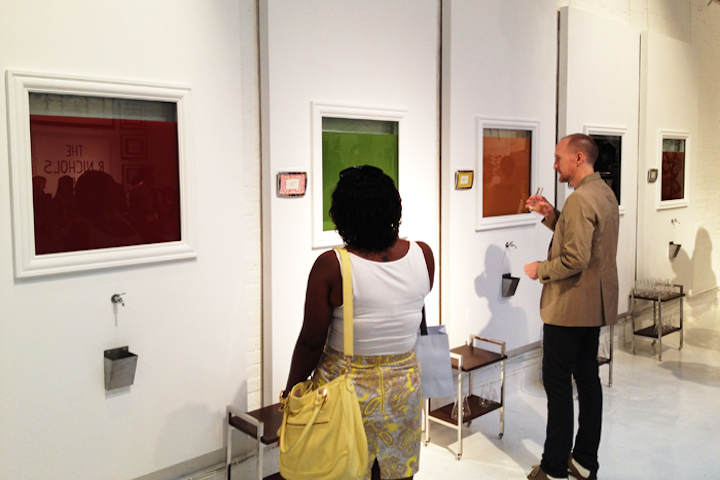 As a unique way to allow guests to create their own drinks, Fresh installed a wall of drink tanks, two- by two-foot clear containers that each held five-and-a-half gallons of liquid (or roughly 123 glasses). Each tank held a different type of juice, including summer-mixed citrus black tea, pomegranate hibiscus, rosemary-infused grapefruit juice, cucumber basil, and strawberry lychee.
Photo: Jim Shi 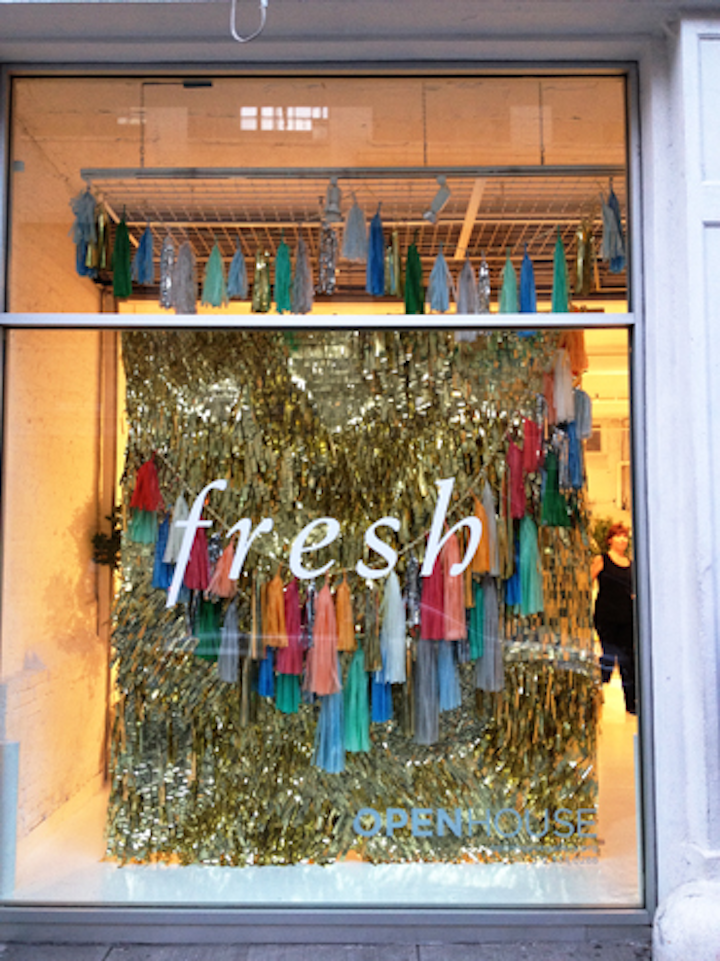 Confetti System built a festive wall that was hung in the main display window of Openhouse Gallery.
Photo: Jim Shi 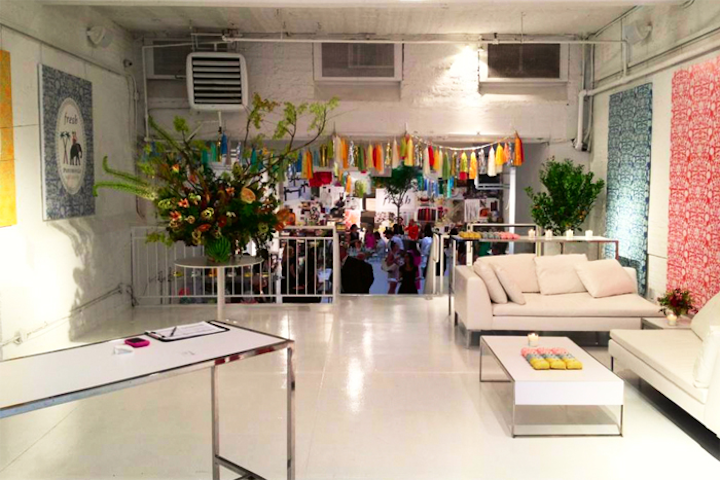 The split-level layout of the NoLIta site allowed Fresh to create a lounge-like section at the entrance, which was separate from the main space. With the white walls and large skylights on premise, no extra lighting was necessary for the event.
Photo: Jim Shi 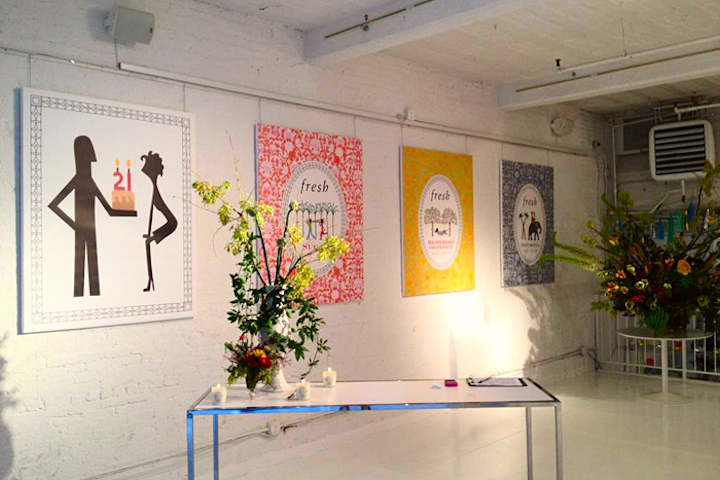 Various sizes of unique floral arrangements of local offerings from Brooklyn-based Saipua were scattered throughout the venue. At the entrance was an oversize birthday announcement piece by R. Nichols as well as three 4- by 8-foot panels that represented limited-edition soap wrappers for Fresh scents sugar, patchouli, and Hesperides grapefruit.
Photo: Jim Shi 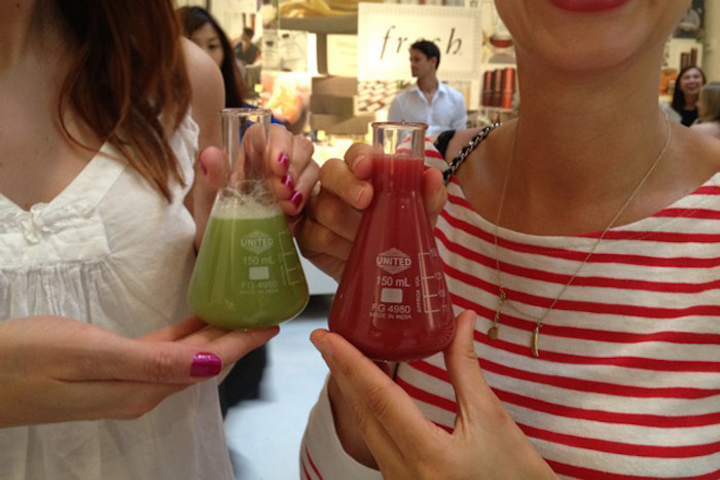 After filling flasks with one of five juices from the drink wall, guests could take their cups to the bar where bartenders mixed cocktails.
Photo: Jim Shi 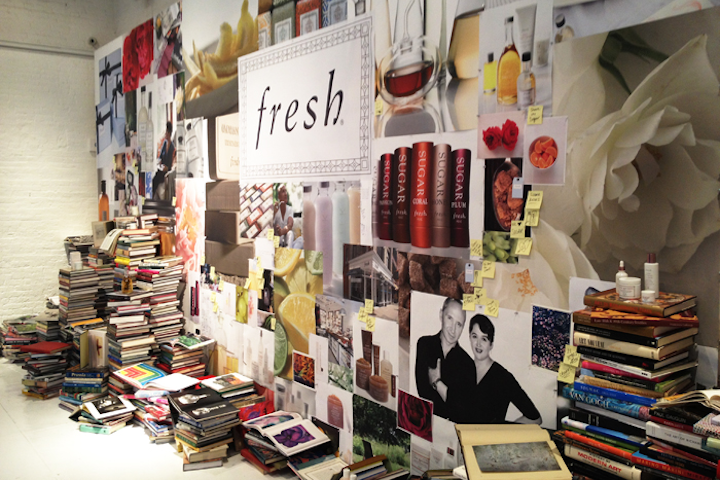 Situated at the far rear wall of the gallery was a 28- by 11-foot wood frame wall with a foam-core center that mimicked a large bulletin board. Graphics displayed on it represented the brand's 21-year journey, while dozens of inspirational design and fashion books were stacked haphazardly with Fresh products resting on top.
Photo: Jim Shi 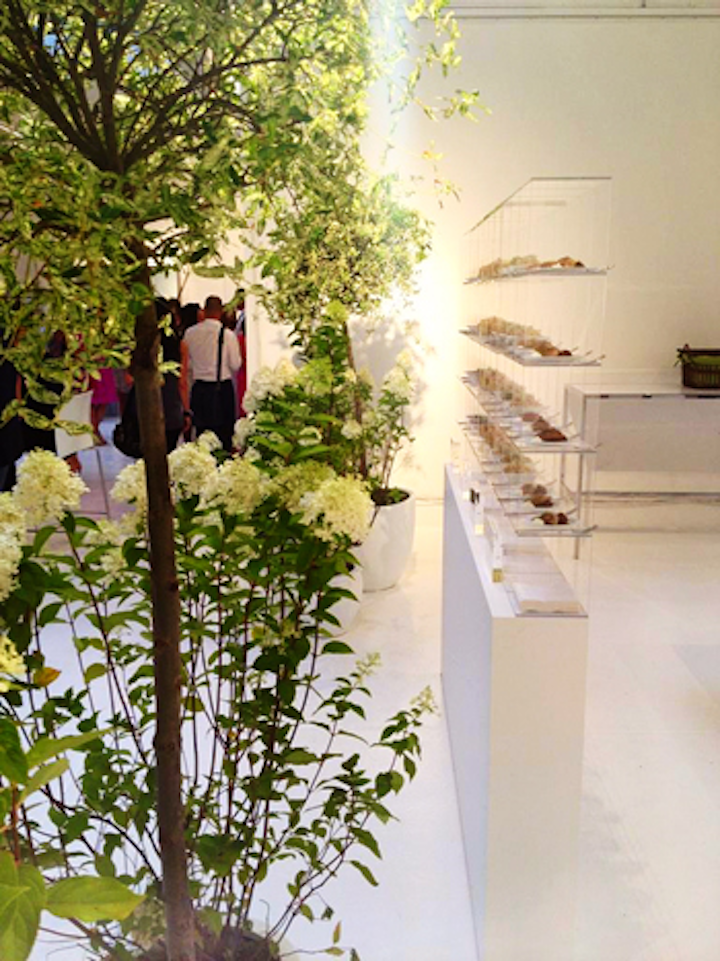 Potted flowers and topiary created a pleasant and transparent view into the open kitchen, where chefs presented finished dishes on a plexiglass tower that guests could grab from.
Photo: Jim Shi 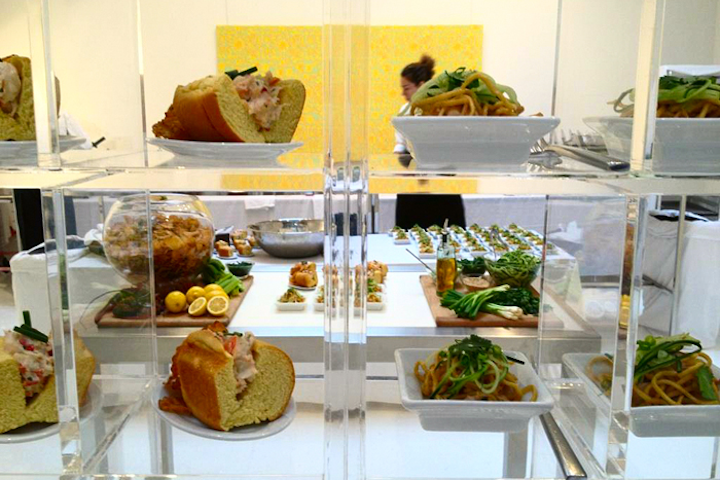 To reflect the brand's request for the food served to reflect four distinct cuisines—Russian, Asian, Italian, and American comfort—Shiraz Events turned the back room into a "tasting plate" experience.
Photo: Jim Shi 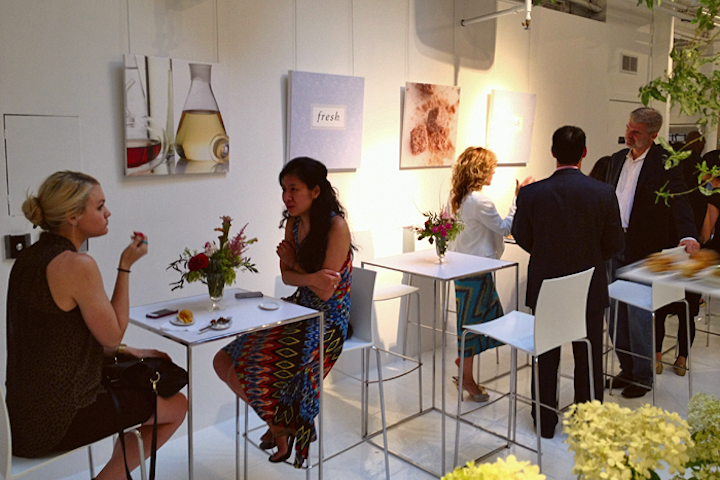 Raising tables and chairs stood near the open kitchen, allowing guests to it and sample the prepared foods. Brand signage and atmospheric imagery peppered the walls as decoration.
Photo: Jim Shi 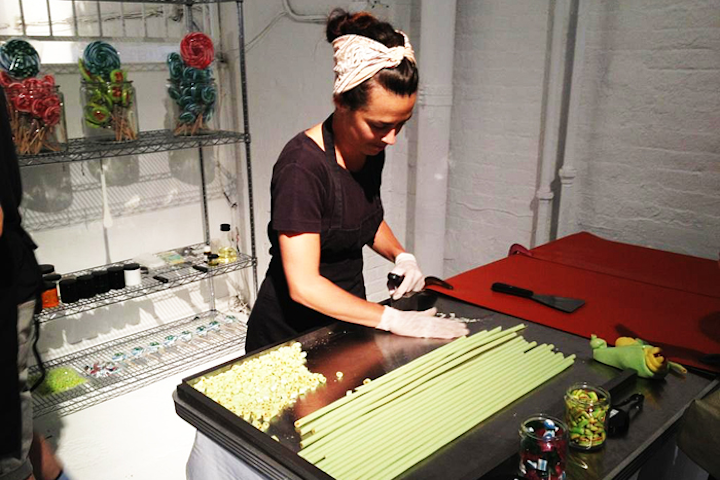 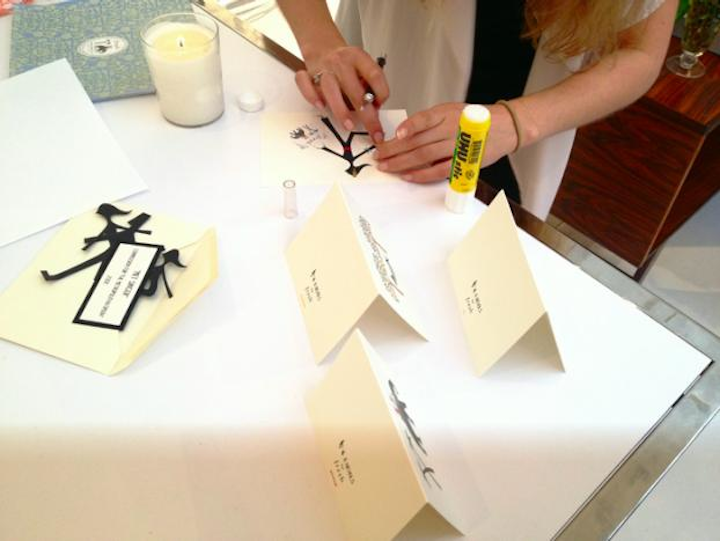 Fresh brought stationery company R. Nichols to the event to create personalized Fresh-inspired note cards for guests as a keepsake. As part of a collaboration, Fresh will be selling special note cards designed by the company, featuring the silhouettes of Fresh founders Lev Glazman and Alina Roytberg.
Photo: Jim Shi 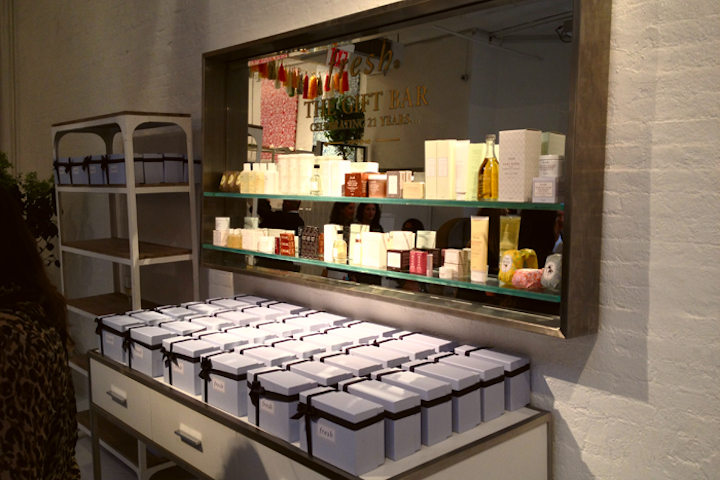 To celebrate 21 years in business, Fresh built a gifting bar where guests could select products from each year since the brand's beginnings. Packages were messengered to attendees the following day.
Photo: Jim Shi
More in Printing & Graphics