Some 3,500 guests attended the 22nd annual Human Rights Campaign National Dinner, which was headlined by Joe Biden and supported by sponsors such as Macy's, Wells Fargo, Marriott, and Google.

The Human Rights Campaign's 22nd annual HRC National Dinner balanced fun and whimsy with a serious political message, thanks to an entrance that immediately grabbed guests' attention. The 3,500 guests made their way through the Walter E. Washington Convention Center on September 15, following signage on the floor to the lower level, where they were greeted by an entrance to the gala decorated with rainbow draping, spherical balloons in varying sizes, disco balls, and HRC graphics with the message "TurnOut."

"In the past the entrance was a bit underwhelming," said David Solsbery, vice president of creative and marketing at Hargrove, on the thinking behind the event's entryway. "This year we wanted to create an atmosphere from the moment the guests arrived. This entrance treatment set the tone and made the guests feel like they had arrived someplace special."

The "TurnOut" messaging with crowd silhouettes is connected to an ongoing HRC campaign to encourage supporters to vote in November and send a pro-equality message (a similar graphic is displayed at HRC's D.C. headquarters right now). The oversize balloons and "TurnOut" signage continued throughout the gala, as seen in the "sponsor experience" display and the silent auction areas.

"We are incredibly grateful for the host of volunteers who make the HRC National Dinner such a huge success. With thousands of guests from across the country and around the world coming together for the event raising crucial funds in the fight for L.G.B.T.Q. equality, the individuals who donate their time and energy—often behind the scenes—are truly the backbone of the annual event," HRC director of events Mollie Levin told BizBash in a statement. "The HRC National Dinner is part of a weekend of events in Washington, D.C., galvanizing HRC’s members and supporters as the organization heads into the final days of our get-out-the-vote efforts for the upcoming midterm elections. Our theme this year—TurnOut—emphasizes the critical importance of voters turning out to send a pro-equality majority to Congress to pull the emergency brake on the reckless, discriminatory agenda of Donald Trump and Mike Pence."

After walking through the entrance, guests continued to the white carpet sponsor experience displaying logos from sponsors like Google. Sponsor activations included a Wells Fargo "Equality" lounge and photo booth, a Marriott display of original artwork in the V.I.P. lounge, and a rainbow-colored display of Macy's clothing. 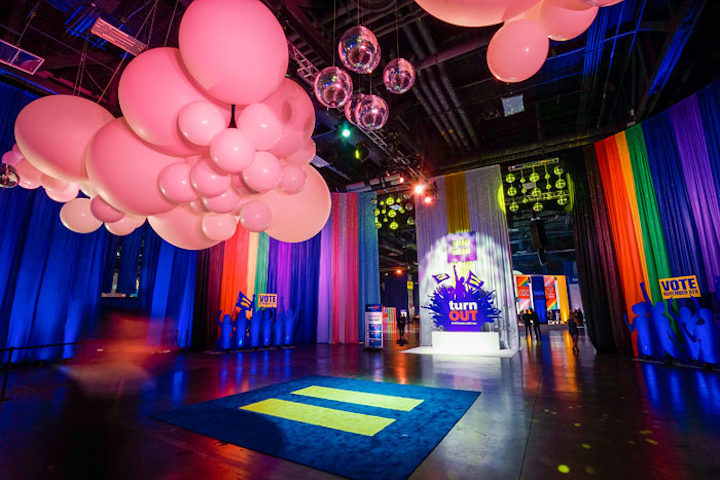 Guests were greeted with rainbow curtains, oversize balloons, disco balls, "TurnOut" signage, and a carpet emblazoned with the campaign's logo as they entered the gala. The welcome room became a popular spot for guest photo ops.
Photo: FotoBriceno 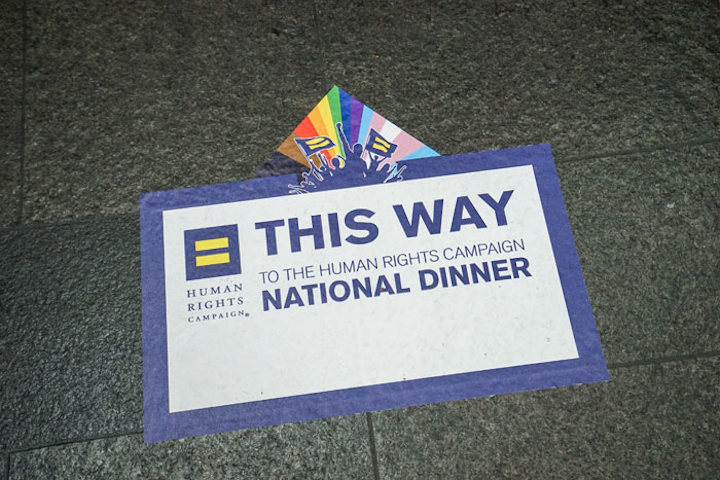 Signage around the Walter E. Washington Convention Center—even on the floor—directed guests toward the gala.
Photo: FotoBriceno 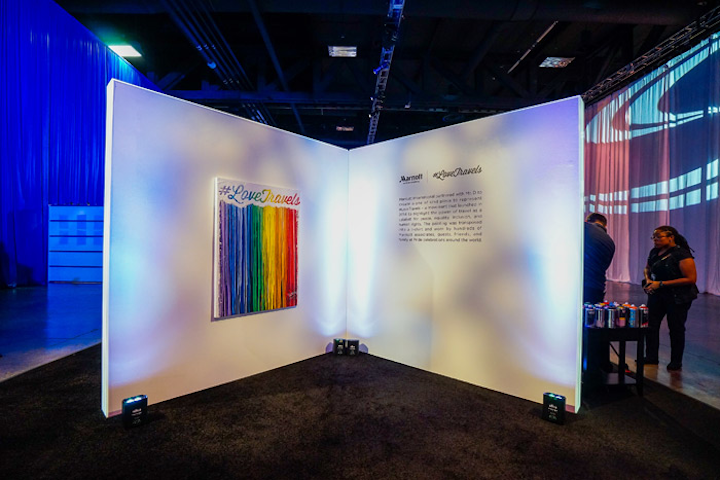 Marriott showcased original artwork created to honor the vision and legacy of Matthew Shepard. Gala eventgoers could bid on the pieces, which were included in the silent auction.
Photo: FotoBriceno 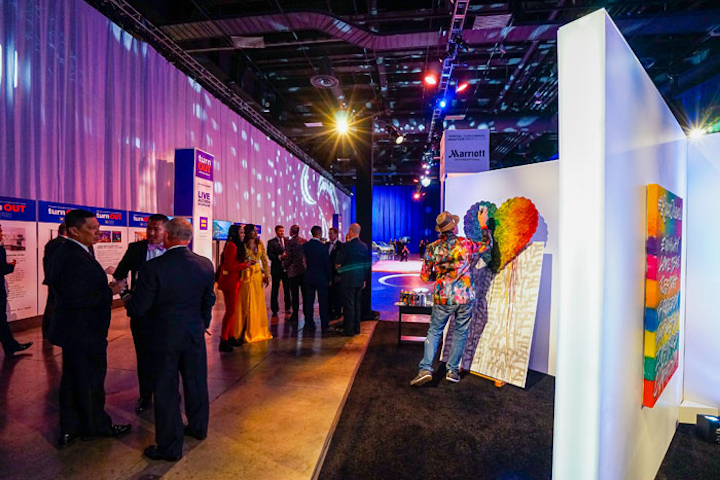 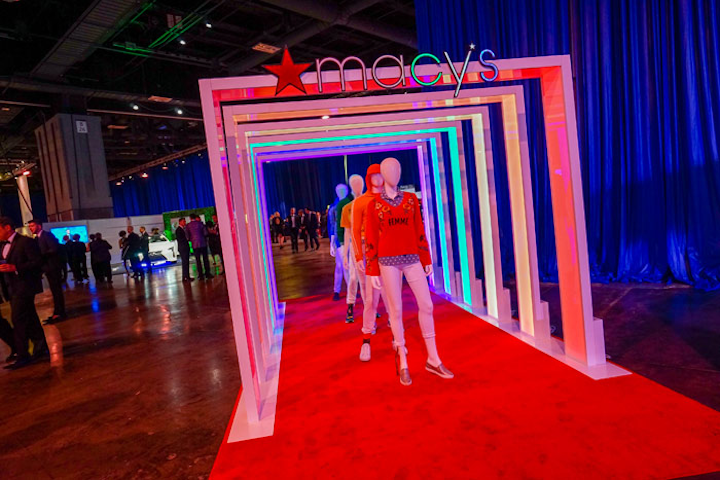 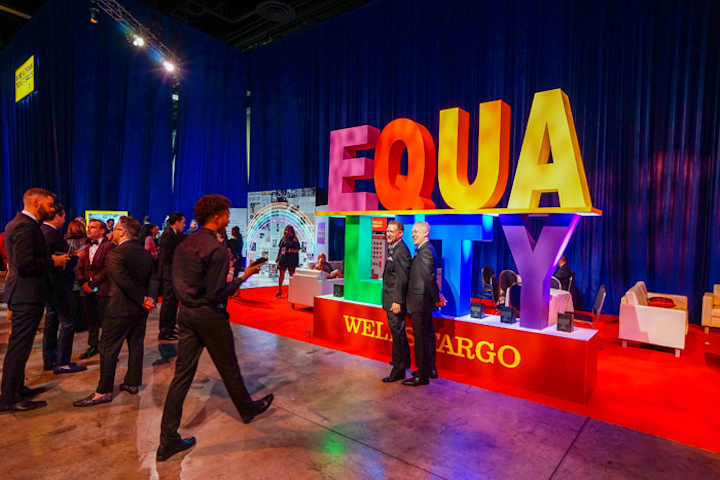 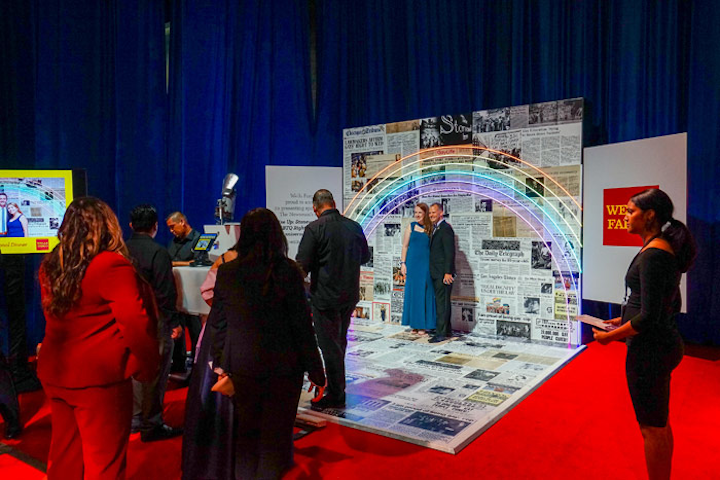 A photo booth in the Wells Fargo "Equality" lounge showcased the company's sponsorship of an exhibit at the Newseum opening in March 2019, called "Rise Up: Stonewall and the LGBTQ Rights Movement—50th Anniversary (1969-2019)." The photo booth featured a backdrop of newsprint with headlines from the time period, accented by a neon rainbow.
Photo: FotoBriceno 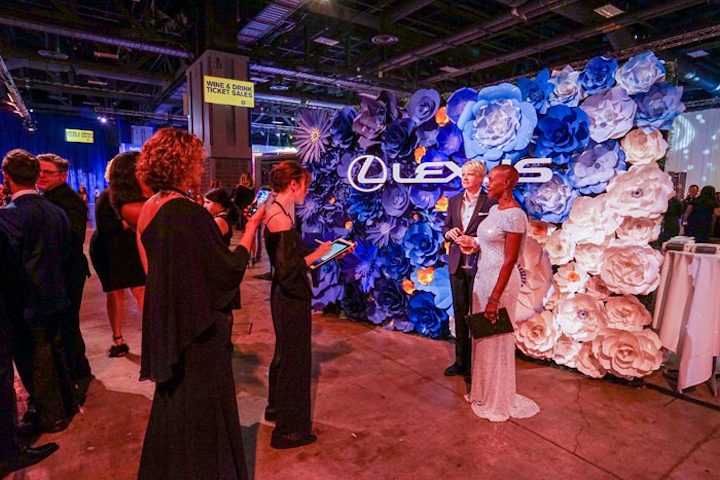 Guests posed in front of a wall covered with 3-D flowers from Lexus. Walton Isaacson also led the activation for Lexus, with production help from Living Color Design.
Photo: FotoBriceno 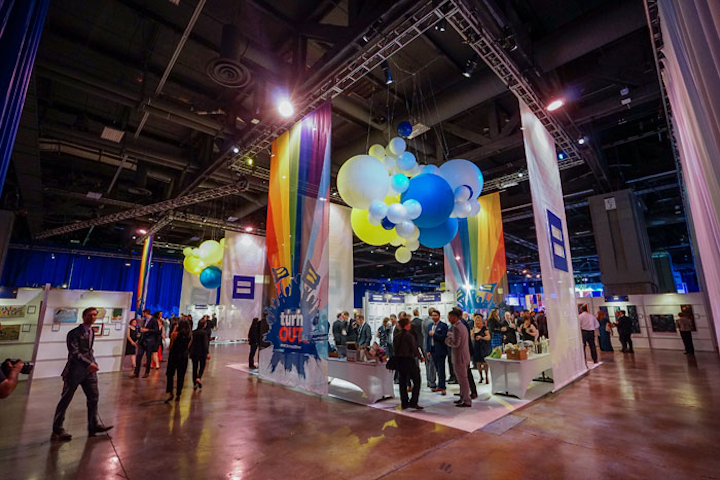 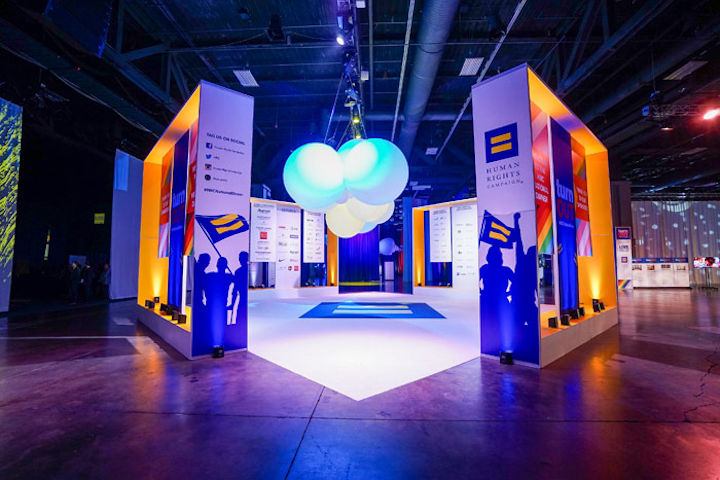 Guests left the welcome room and headed toward a white carpet "sponsor experience" with signage and sponsor graphics. Balloons drew the eye up, while the space was kept open to help with the flow of guests.
Photo: FotoBriceno 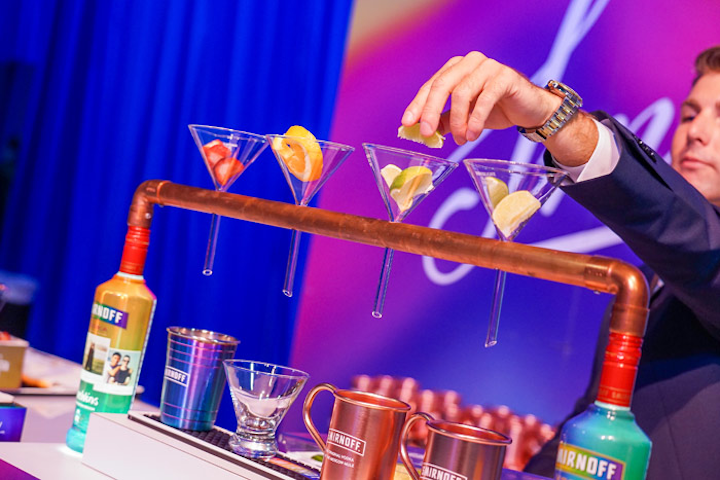 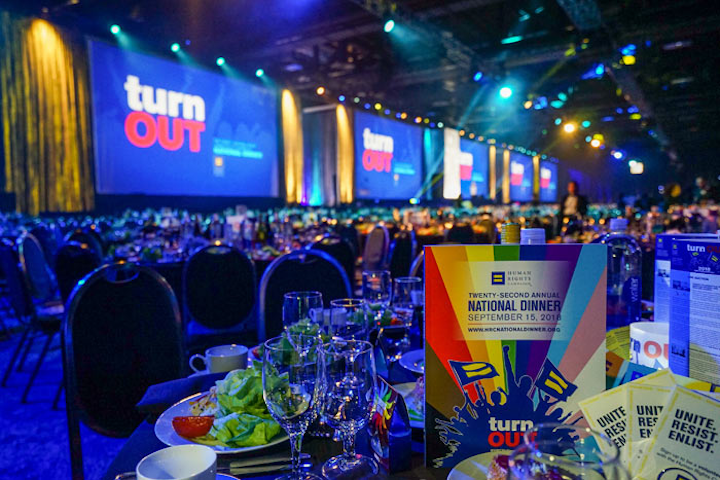 Multiple screens and podiums provided a clear sightline to every seat in the dining area, while draping took on different colors as the lighting changed.
Photo: FotoBriceno 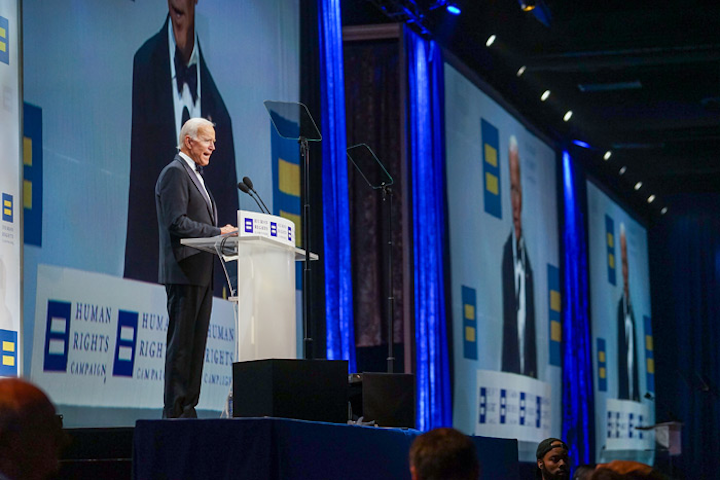 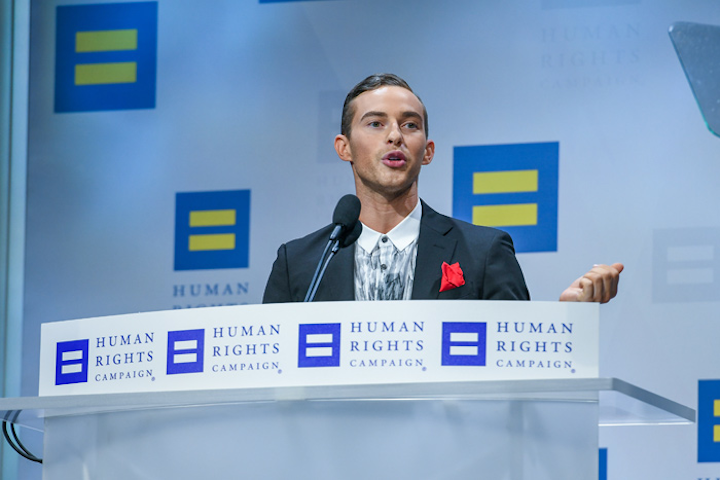 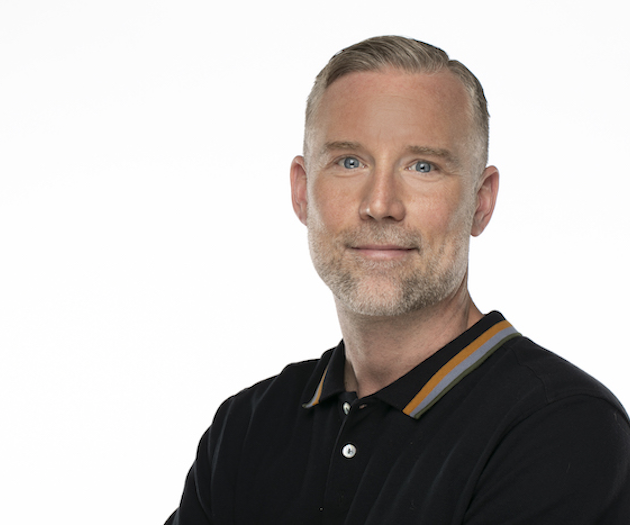