How Preston Bailey Transformed a Room Three Times in One Morning

Mere hours after his own wedding wound down around 4:30 a.m. on Thursday morning, Preston Bailey was back on the job at the Empire State Building, where the iconic skyscraper was hosting its 19th annual Valentine’s Day wedding event. Three couples were chosen to wed in customized ceremonies designed by Bailey on the only day the building allows weddings, after submitting their love stories via a Facebook contest.

Working with Something Different Party Rental and Levy Lighting, Bailey designed three dramatic, seasonally themed ceremony looks for the couples, which took place one after the other starting at 9 a.m. That left Bailey’s team only about 15 minutes to swiftly change over the raw space from one theme to the next. After the final ceremony wrapped, each couple, along with the guests, headed to a lunch reception held in a separate area of the building’s 21st floor. For the reception, Bailey created a tabletop look for each of the three wedding parties, reflecting the season featured during the individual ceremonies. 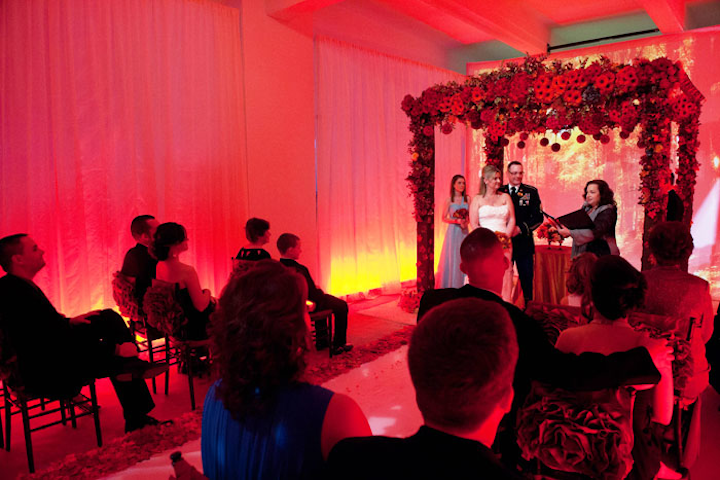 The final ceremony look had a fall theme, with bold red lighting, a chuppah covered in gerbera daisies, and an aisle runner lined with fabric autumn leaves.
Photo: Courtesy of Edelman 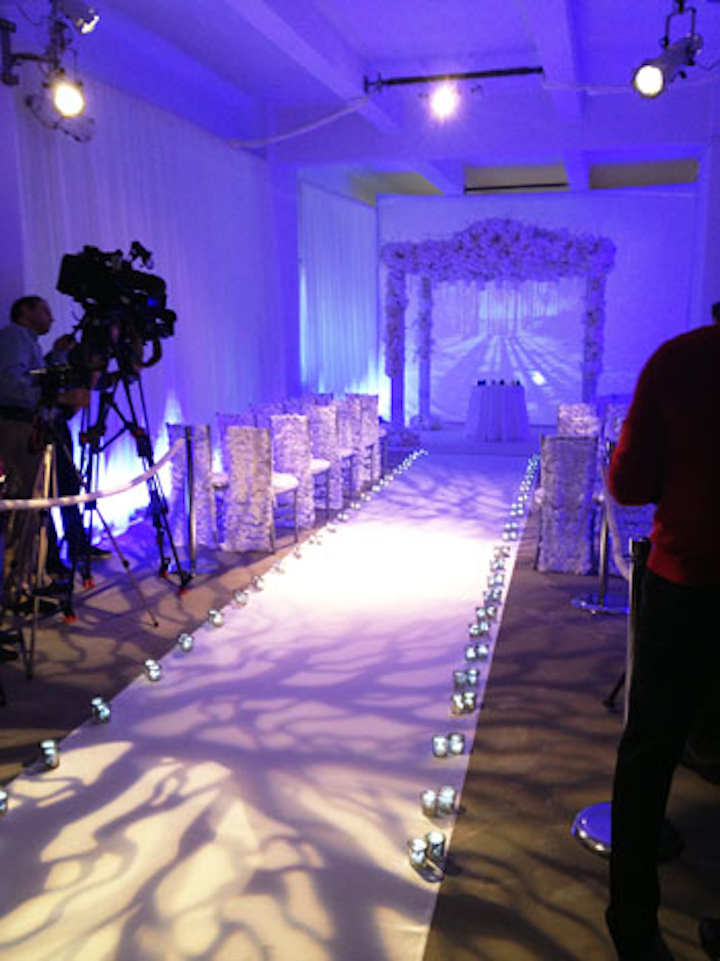 Awash in icy blue light, the first ceremony had a winter theme. Levy Lighting projected a snowy scene behind the altar and bare tree branches onto the white aisle runner.
Photo: Lauren Matthews/BizBash 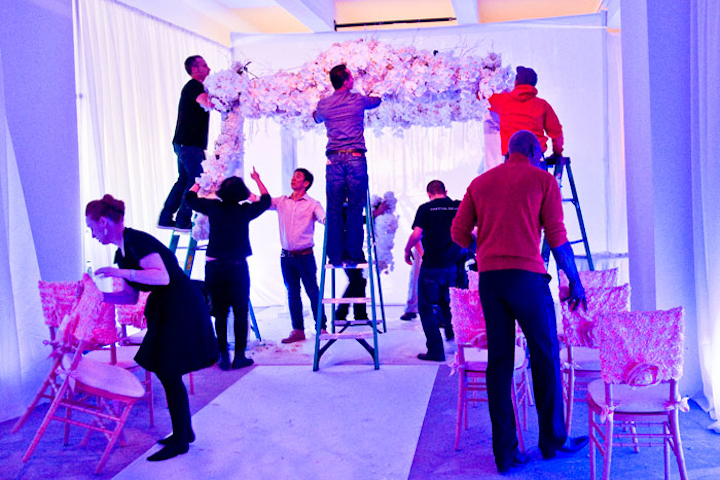 After each ceremony wrapped, Bailey's team had about 15 minutes to swiftly change over from one theme to the next. The chairs, accessories, and predesigned flower arrangements were ready to go behind a draped-off area adjacent to the ceremony space.
Photo: Stephanie Fray/Something Different Party Rental 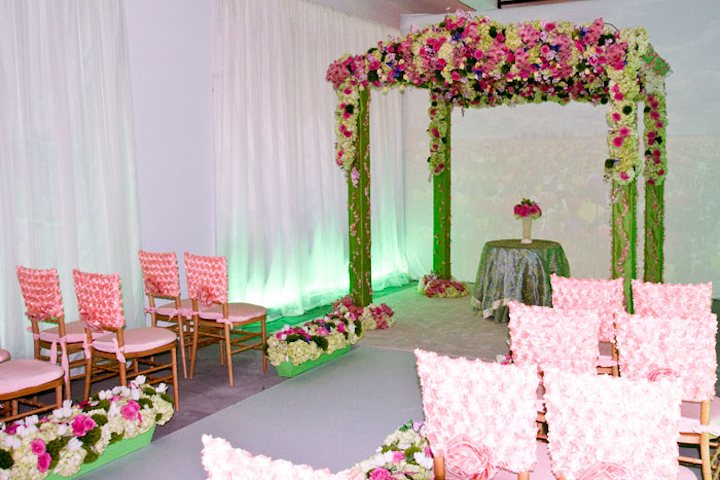 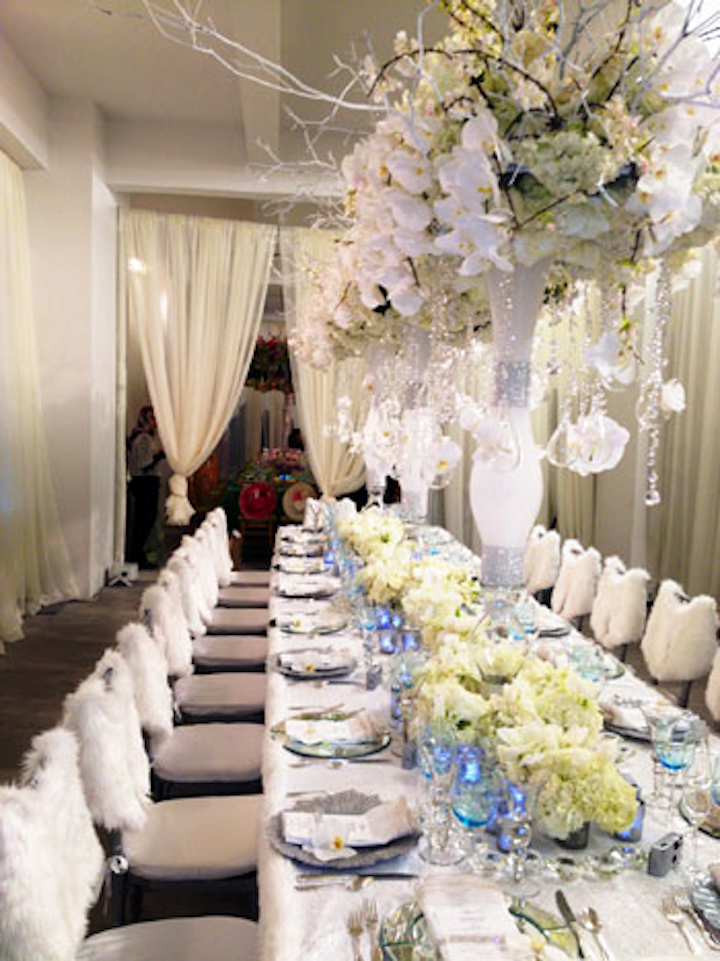 After the ceremonies, the newlyweds and their guests headed to a lunch reception, for which Bailey created three separate tabletop looks. The winter table was covered in a sequined linen and was set with Something Different Party Rental's sparkly Silver Sea Sponge glass chargers and blue Ariana goblets.
Photo: Lauren Matthews/BizBash 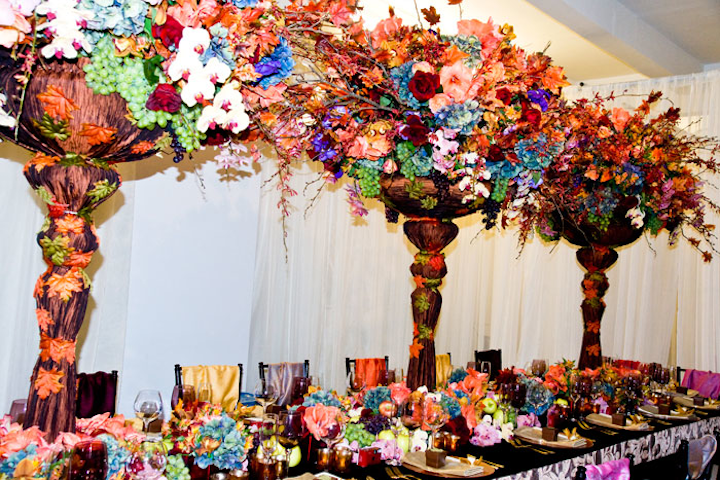 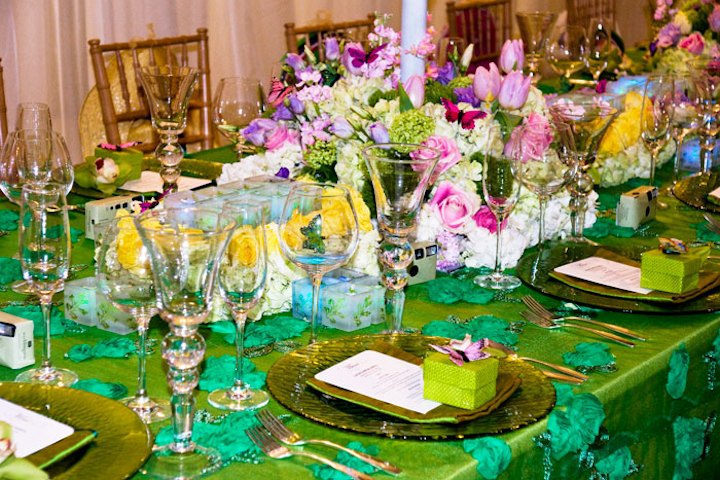