Fall may be just around the corner, but there’s still a little more than a week left to plan an outdoor summer picnic. Diffa: Design Industries Foundation Fighting AIDS recently presented upscale picnic basket ideas at its annual Picnic by Design event. This year, the intricate baskets re-imagined a staple in New York culture: Broadway.

The seventh edition of the fund-raiser, which took place September 5, featured more than 20 theatrical baskets created by designers and brands, each of which took inspiration from a specific Broadway show or the general theme of theater. Baskets and tabletops reimagined new shows such as Mean Girls and Frozen and long-running shows including Chicago The Musical and The Lion King.

Held at the lounge and terrace at the Viacom building in Times Square, the event hosted more than 200 design industry guests who bid on the baskets. The event was a success, raising nearly $60,000 for the Diffa, which supports H.I.V./AIDS organizations across the country. Last year’s event raised just over $50,000.

This year’s event was co-chaired by David Rockwell, founder and president of the Rockwell Group, and Tom Viola, executive director of Broadway Cares and Equity Fights AIDS. Along with the baskets to bid on, the event also showcased an exhibition of images of the Imperial Theatre from the Shubert Archives and Rockwell Group’s model of the set design for Dirty Rotten Scoundrels. Event sponsors included the AIDS Healthcare Foundation, Brooklyn Brewery, Interior Design magazine, and Tito’s Handmade Vodka, which also had its own picnic basket.

Here’s a look at some of the eye-popping baskets inspired by shows including SpongeBob SquarePants, Summer: The Donna Summer Musical, Dear Evan Hansen, and Mamma Mia! 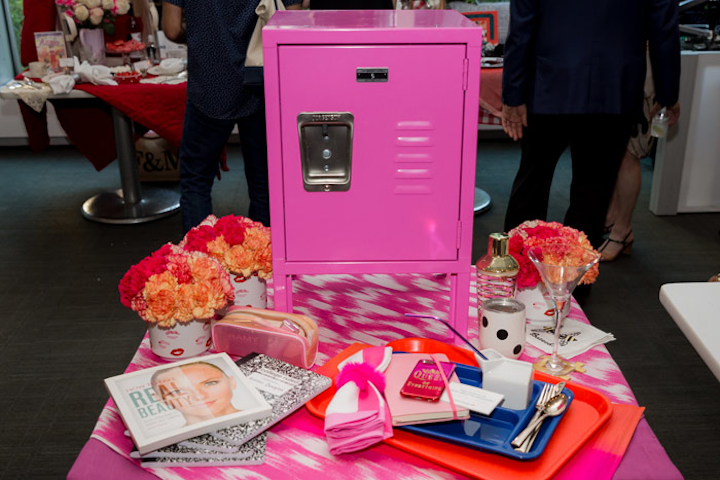 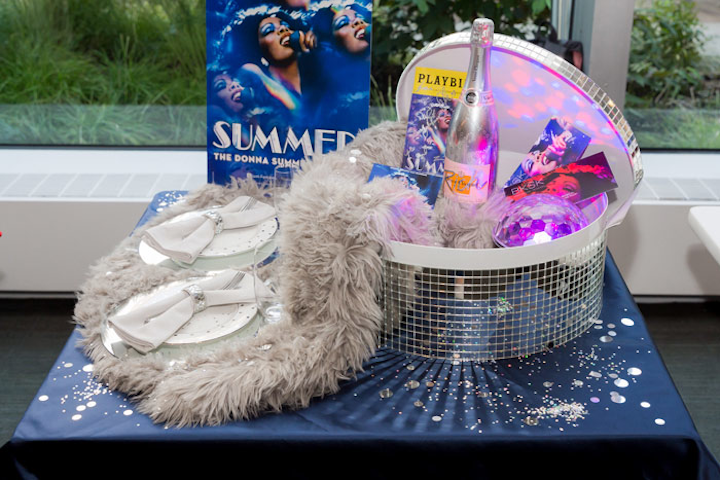 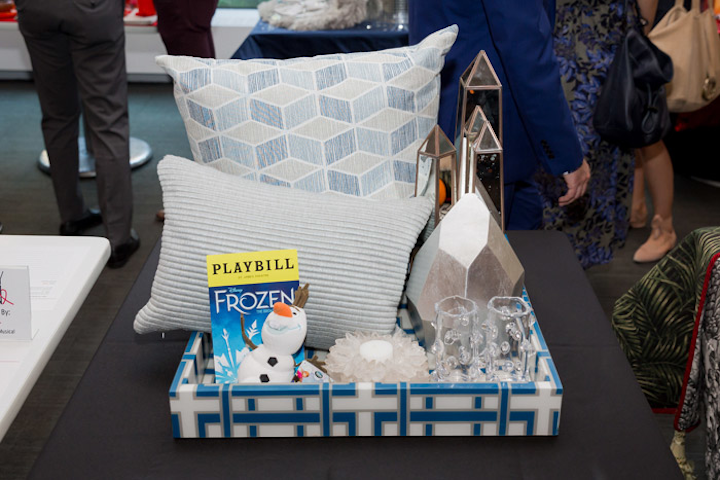 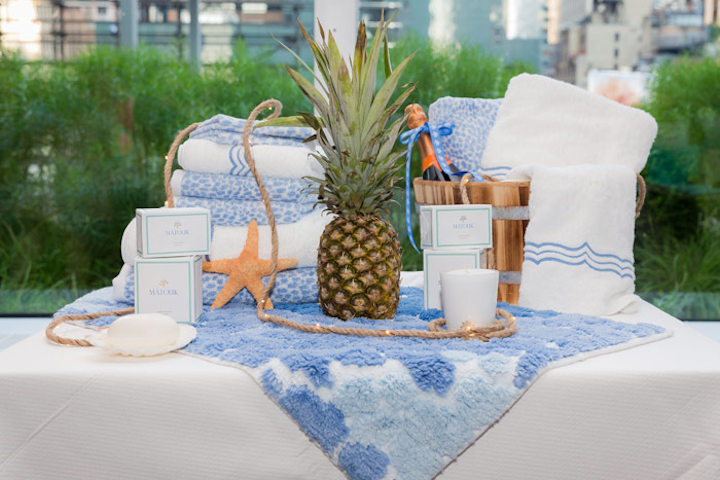 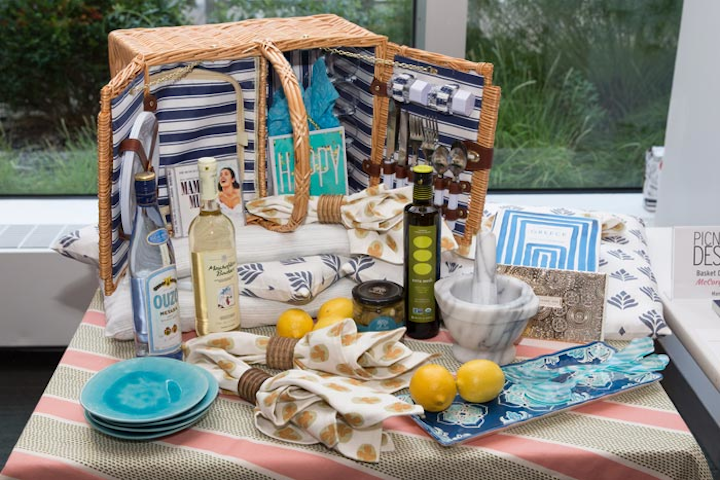 Inspired by Mamma Mia!, McCory Interiors designed an Aegean teal-hued basket that highlighted the brand’s woven coverings, cushions, and napkins. Additional items included a picnic basket with a cooler in Duralee fabric, bottles of Ouzo and Moschofilero Boutari wine, a jar of olive tapenade, a marble mortar and pestle, and a CD of the cast recording.
Photo: Erik Bardin 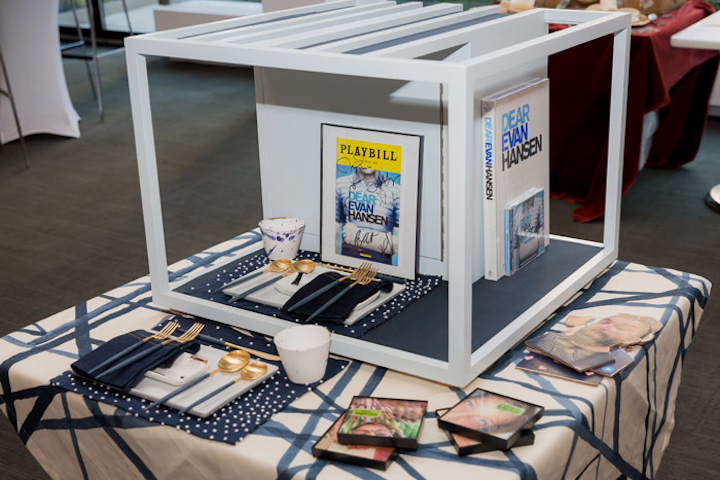 For Dear Evan Hansen, Michele Alfano Design created a basket that played off the main character’s striped shirt, and aimed to imitate the paradox of feeling interconnected through social media but isolated in the real world. The basket features Robert Allen fabric stripes, a blanket and two settings with Kravet fabric, cutlery from Horne Goa with gold-plated and blue resin handles, and a playbill signed by the cast.
Photo: Erik Bardin 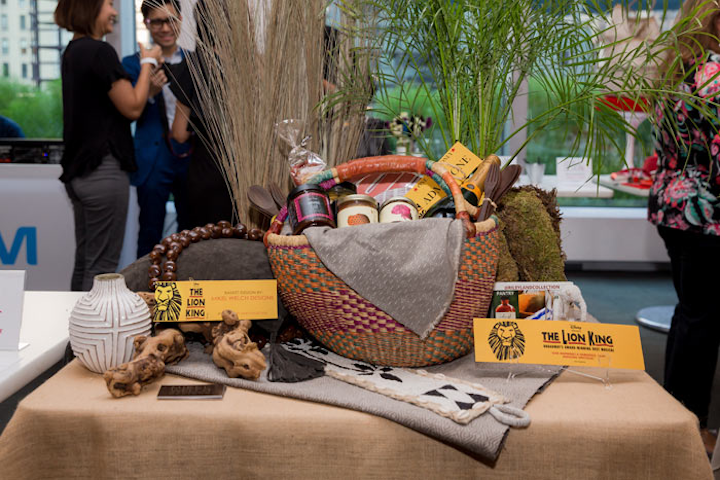 Mikel Welch Designs crafted an Africa-theme basket that paid tribute to The Lion King with a variety of condiments and kitchen items. The basket also had a bottle of Veuve Clicquot and two tickets to the Disney musical.
Photo: Erik Bardin 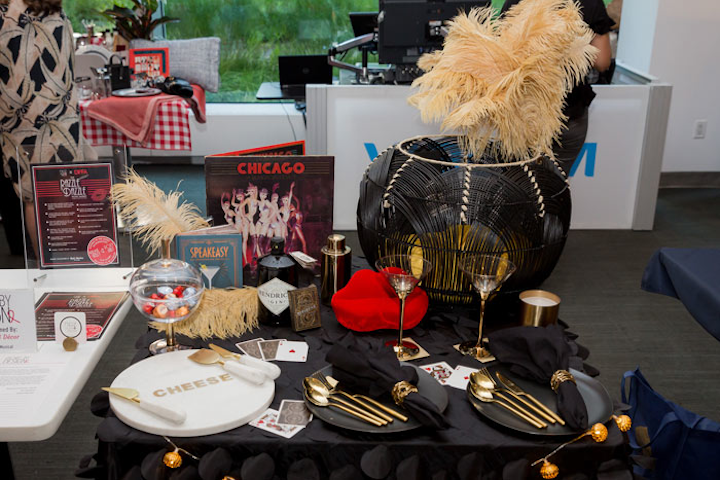 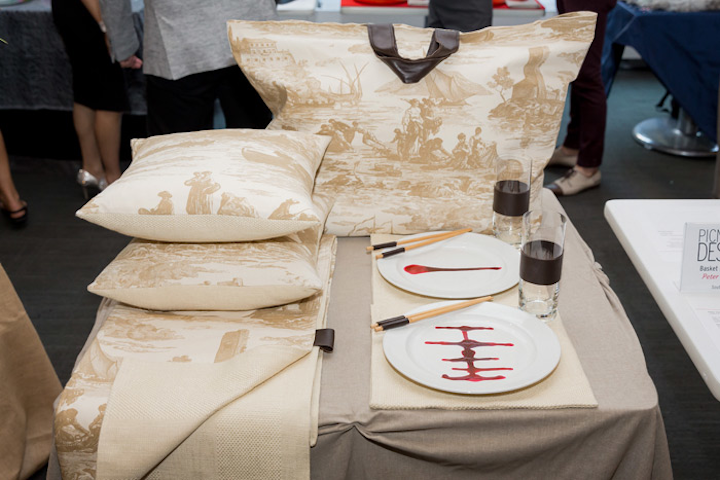 Home accessories and interior designer Peter Valcarcel created a display inspired by South Pacific, which had items including a tote bag, a throw, two pillows with down feather inserts, two hand-painted plates, and chopsticks with leather-wrapped ends.
Photo: Erik Bardin 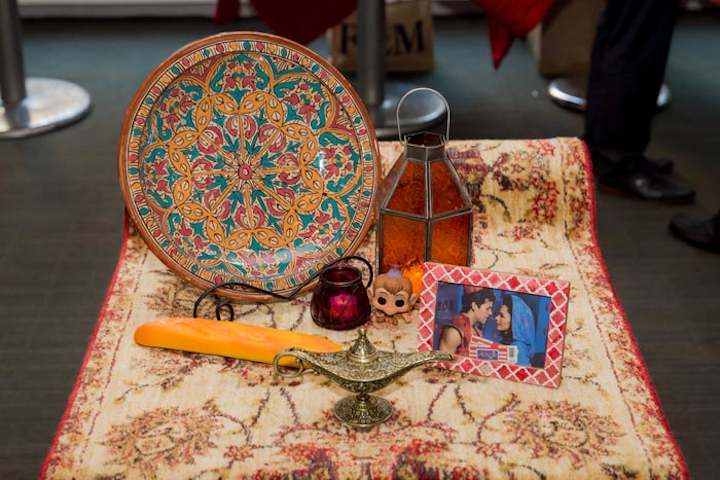 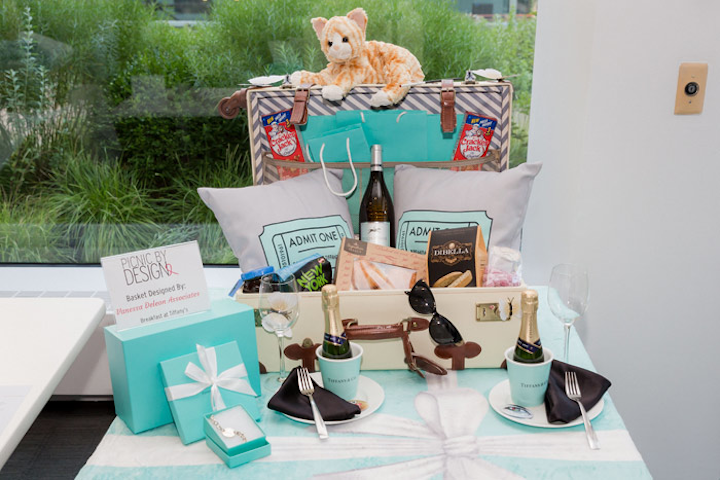