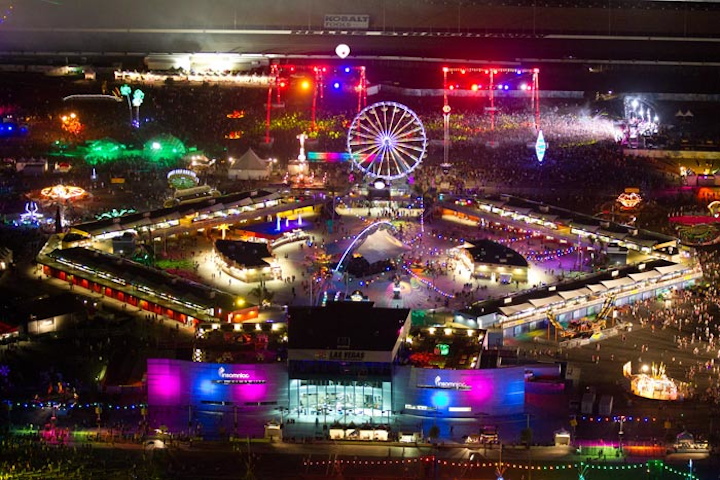 The Electric Daisy Carnival moved in June 2011 to the Las Vegas Motor Speedway, where it was widely considered a success. It returns June 8 to 10.
Photo: Erik Kabik

After a 15-year-old girl died of a drug overdose at the 2010 Electric Daisy Carnival music festival in Los Angeles, where promoter Insomniac Events had worked with the L.A. Memorial Coliseum for 13 years, the festival moved to the Las Vegas Motor Speedway for 2011. There, it was widely considered a success, with only routine criminal and health incidents reported among 200,000 fans at the June event. The three-day fest was such a hit in its new Vegas home that it will return to the same venue this weekend for its 16th edition, signaling that the festival’s Nevada move might be the savior of an event otherwise mired in controversy. What's good for the festival is good for Nevada, too: organizers say it will provide a $136 million economic boost for Clark County.

Look for this year's event to grow, with 345,000 people expected through the turnstiles, plus more stages for headliners David Guetta, Tiesto, and Kaskade, plus major art installations. "Providing the ultimate festival experience to our fans is top priority for Insomniac," Insomniac founder and C.E.O. Pasquale Rotella said in a statement; the company closely guards its comments in the media. "We are excited to be teaming up with some of Vegas's finest nightlife and travel partners again this year to offer top-tier amenities to our attendees."

Among those larger-than-life flourishes: Guests can arrive by way of a quick helicopter ride to the speedway from Maverick Aviation. Private transfers seat seven and begin at $3,000. Individual round-trip seats are available for $800. The event will also offer 21-and-older attendees the option of a V.I.P. viewing deck overlooking the Kinetic Field, billed as the largest temporary stage in North America. Decor in the space will include sleek black flooring, leather couches, chandeliers, and greenery. Marquee will host private table reservations, which include amenities like golf cart transfers from the entrance and gift bags with Electric Daisy Carnival swag. Reservations begin at $3,000 and include access to a complete bottle-service menu with dedicated waitstaff from the nightlife venue.

Billed as the largest electric dance music festival in North America, the three-day dusk-until-dawn event will include seven massive stages in all, 15 minutes of fireworks nighty, 26 carnival rides, and 200 DJs. From the logistics perspective, there will be 700 staffers on the 1,000-acre festival site, 96 water stations (cooling in the desert is a major potential liability and health concern), plus 40,000 parking spots and 50,000 seats on shuttles daily.