Winter Is Here: See How HBO and Other Brands Are Celebrating the Final Season of 'Game of Thrones'

From a fountain and pyrotechnics show at the Bellagio in Las Vegas to a worldwide iron throne scavenger hunt, HBO and other brands are bidding farewell to the fantasy series with consumer events and premieres.

The watch has almost ended for Game of Thrones fans. The eighth and final season of HBO’s mega-hit fantasy series begins April 14 and, over the course of six episodes, viewers will finally discover which character, if any, will ultimately sit on the Iron Throne.

In celebration of the bittersweet end for fans, HBO and other brands have brought elements of the show and its fictional setting of Westeros to life with consumer and V.I.P. events. While HBO isn’t a stranger to buzzy promotional events for the series (remember when a dragon crash landed in cities across the U.S.?), many of this year’s events have been tied to HBO’s months-long #ForTheThrone marketing campaign, developed in partnership with Droga5. Other brands such as Snyder’s of Hanover and Oreo have jumped on the final season hype with on-theme promotions targeting fans both old and new.

Here’s a look at some highlights from Game of Thrones-theme events this year, including a massive iron throne at Rockefeller Center for the season eight premiere in New York; a four-minute audiovisual spectacle at the Fountains of Bellagio in Las Vegas; and a worldwide throne scavenger hunt. 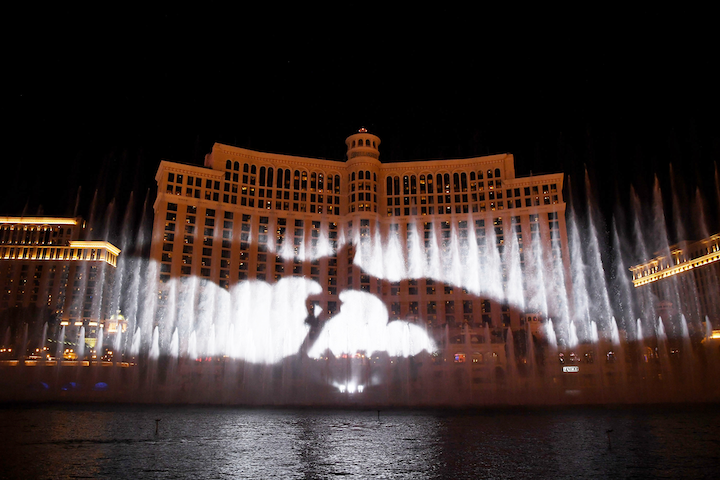 Ahead of the final season, HBO collaborated with MGM Resorts and Wet Design to produce a show featuring pyrotechnics, music, and video projections on the Fountains of Bellagio in Las Vegas. The show is set to a custom score by series composer Ramin Djawadi, and features projections including the silhouette of a dragon.
Photo: Denise Truscello/Getty Images for MGM Resorts 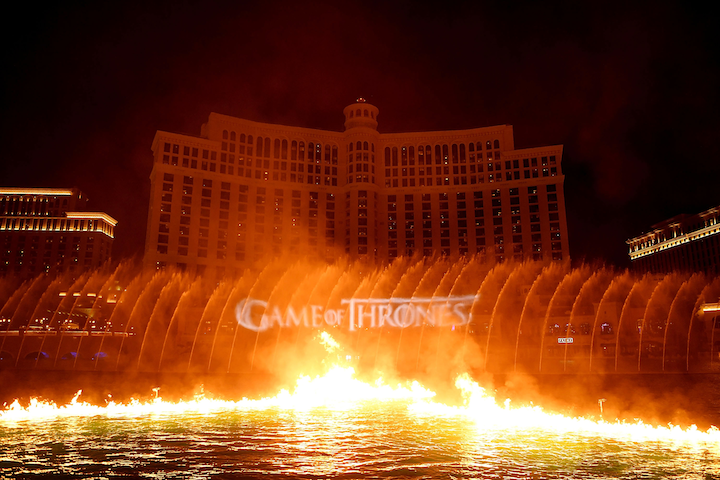 The four-minute spectacle sets water ablaze with pyrotechnics and displays the series title on the fountains.
Photo: Denise Truscello/Getty Images for MGM Resorts 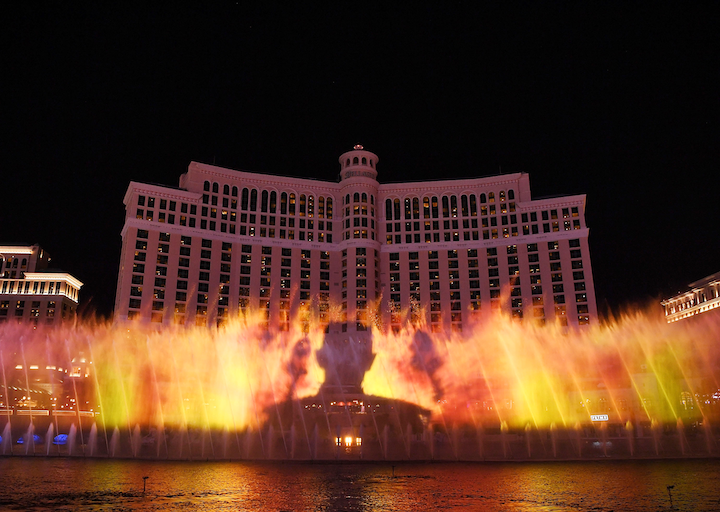 Projections also include a silhouette of the Night King, the main villain heading into the final season, against illuminated water jets. The show runs twice nightly through April 13.
Photo: Denise Truscello/Getty Images for MGM Resorts 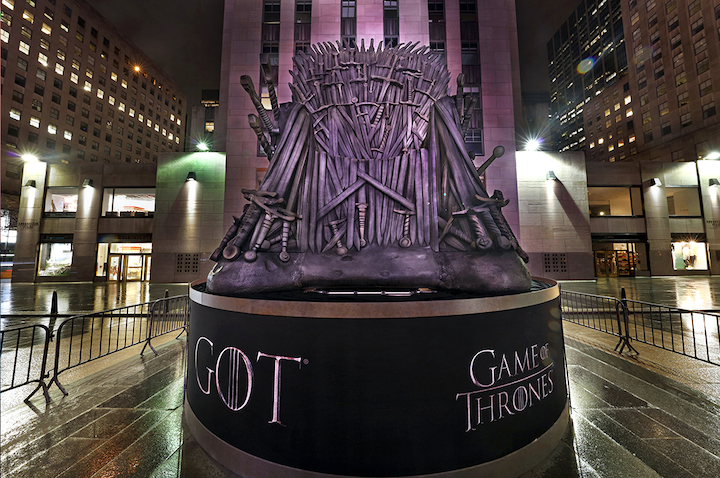 The world premiere of the final season took place April 3 at Radio City Music Hall. Ahead of the screening, HBO tapped 15/40 Productions to install a massive Iron Throne at Rockefeller Center. The towering, 35-foot structure weighed 20,000 pounds and provided a popular photo op for locals and tourists.
Photo: Line 8 Photography 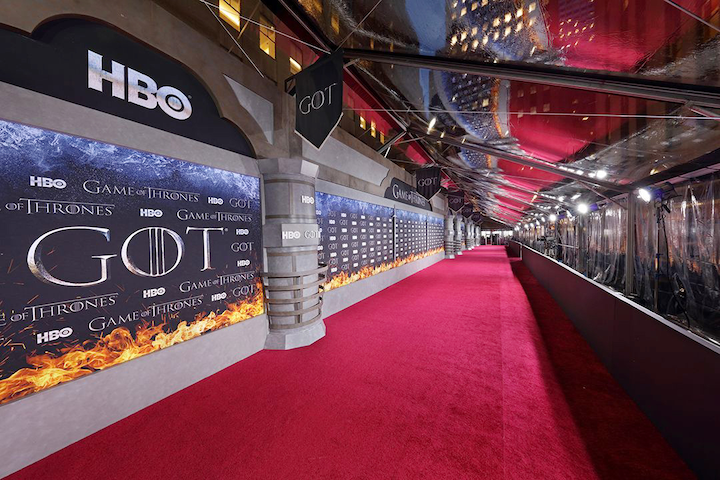 15/40 Productions also designed the red carpet. The 200-foot-long arrivals tent featured branded pillars and flags reminiscent of a castle, and a step-and-repeat with graphics of ice and fire and the series title.
Photo: Line 8 Photography 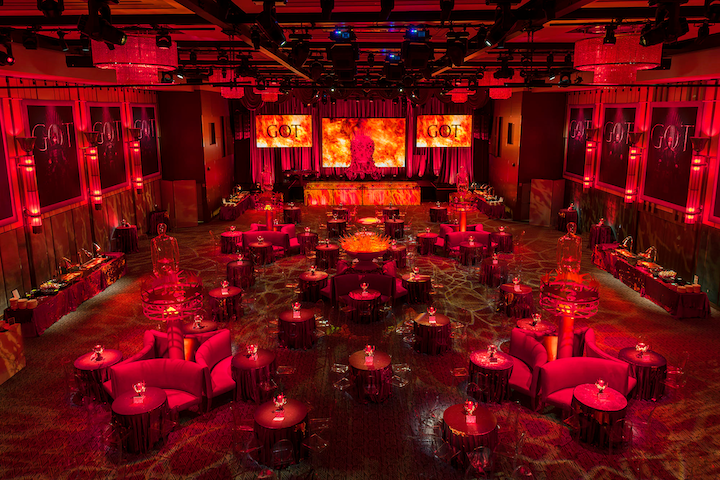 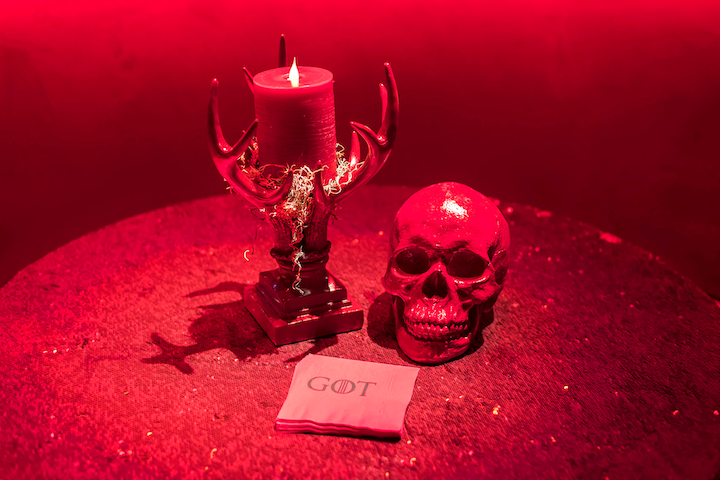 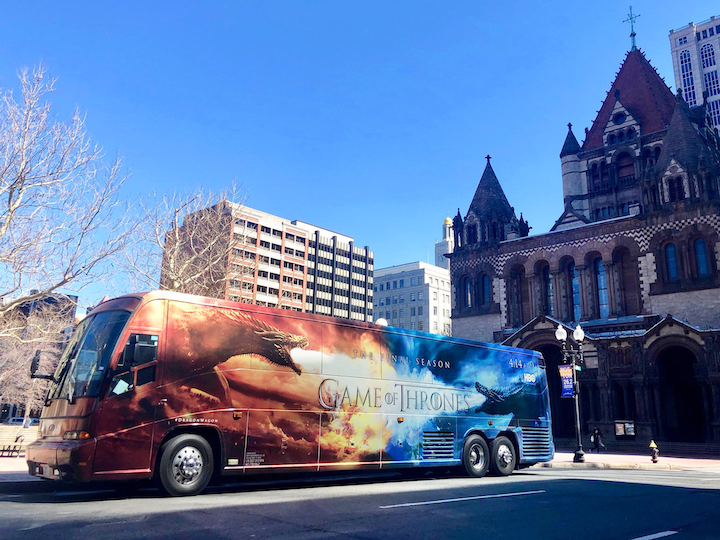 On April 2, fans entered to win a trip to the New York premiere at the AT&T flagship store in Boston. Five fans and their guests won a trip to the event on the “Dragon Wagon,” a charter bus wrapped in branded imagery of two dragons, teasing the final season. The bus wrap was designed by Lime Media.
Photo: Courtesy of HBO 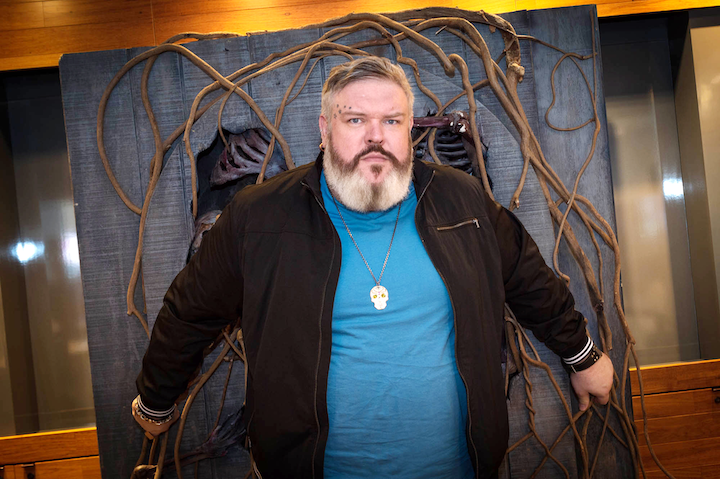 The AT&T store experience also featured activations produced by Giant Spoon, including a “Hold The Door” photo op, alluding to a memorable scene from season six. Actor Kristian Nairn (Hodor) was on site for photo ops with fans.
Photo: Courtesy of HBO 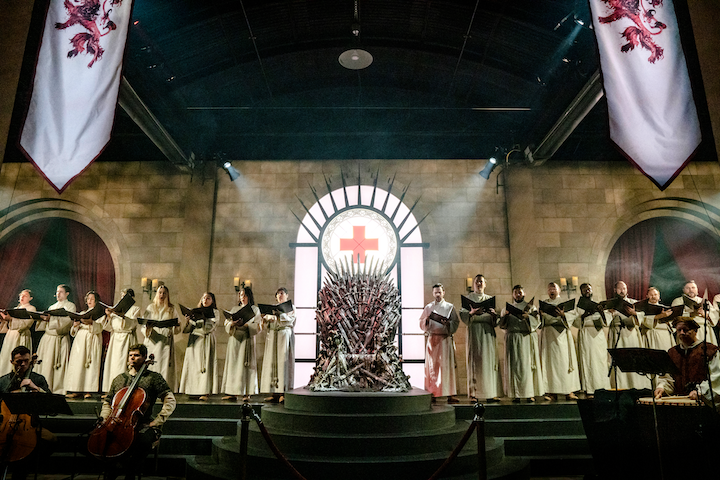 At South by Southwest in March, HBO partnered with Giant Spoon to recreate a castle and war campgrounds from the series. The theme of the activation was blood, and the American Red Cross was on hand for donations (though donations weren’t necessary to enter the activation). Actors played characters from the show’s seven kingdoms, scripted with the help of entertainment development company Mycotoo, in a scene set at the Iron Throne where people were given Hand of the Throne pins after they pledged their allegiance to the king. The pins offered discounts at local restaurants and stores. There was also an auditory tour through character plotlines and a war camp with free burgers from Shake Shack and non-alcoholic beverages. The action was set to a live choir of Austin singers led by Dr. William Kempster, who created an original arrangement for the event. See more here.
Photo: Courtesy of HBO

Quest for the Throne 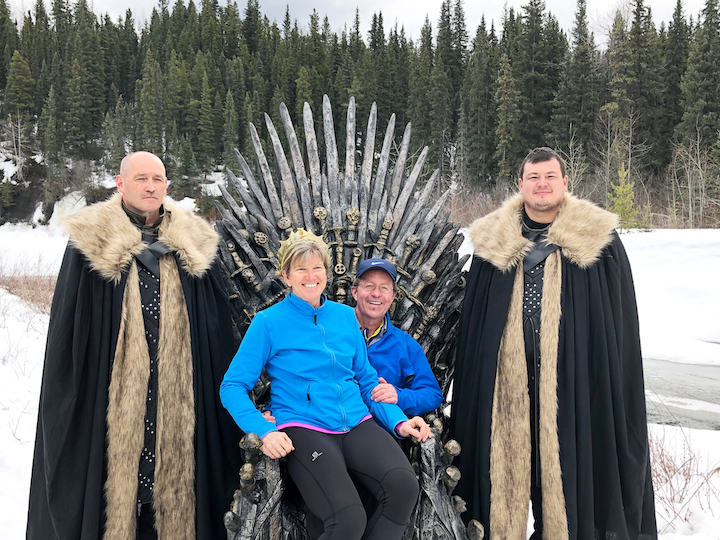 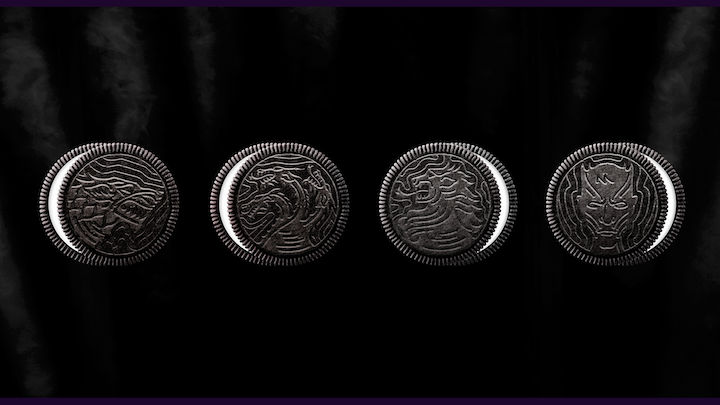 Oreo released limited-edition Game of Thrones cookies, which feature embossments of House Stark, House Lannister, House Targaryen, and the Night King. The cookie brand and HBO also collaborated with Elastic—the creators of the show’s opening credits sequence—to create a version of the opener with an animated landscape built with 2,750 Oreo cookies. See the video here.
Photo: Courtesy of Oreo 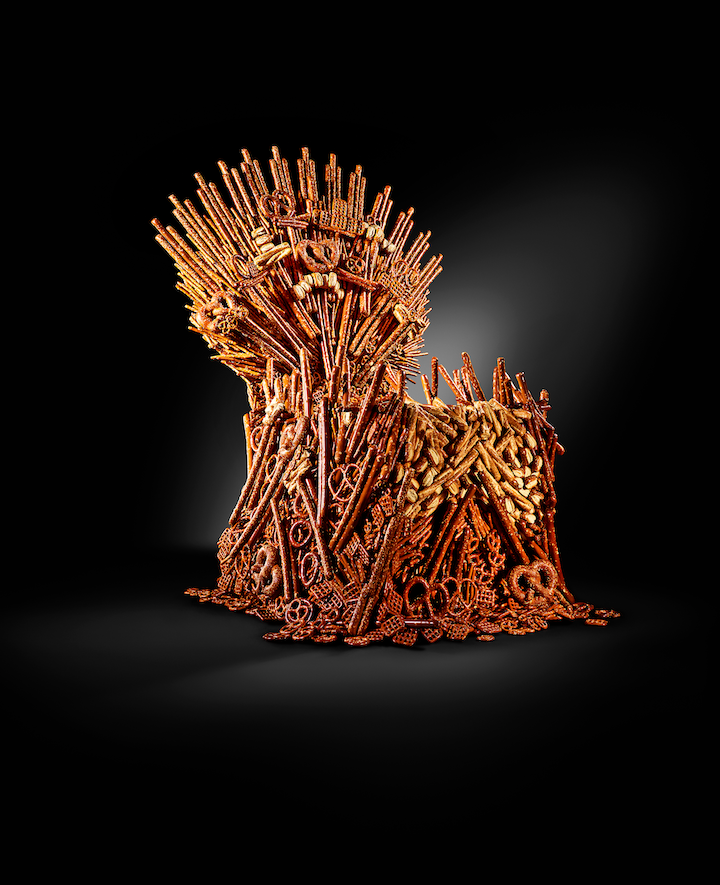 In recognition of the final season, pretzel brand Snyder of Hanover’s created an iron throne replica with more than 1,000 pretzels. The throne was assembled by food stylist Michelle Gatton and artist Sam Kaplan with 14 variations of pretzels.
Photo: Courtesy of Snyder's of Hanover
More in Las Vegas 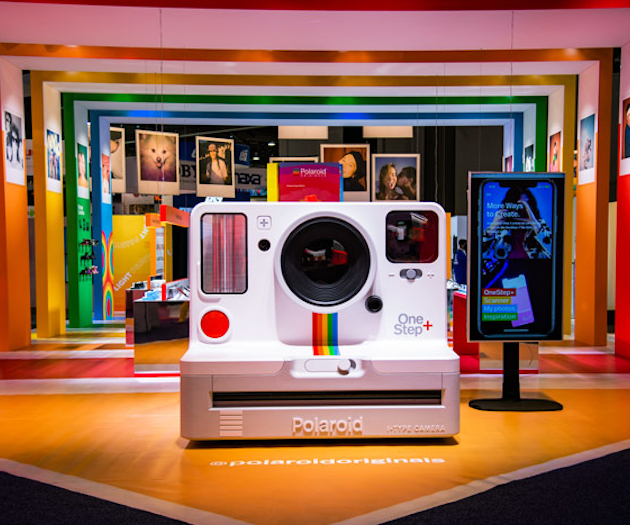