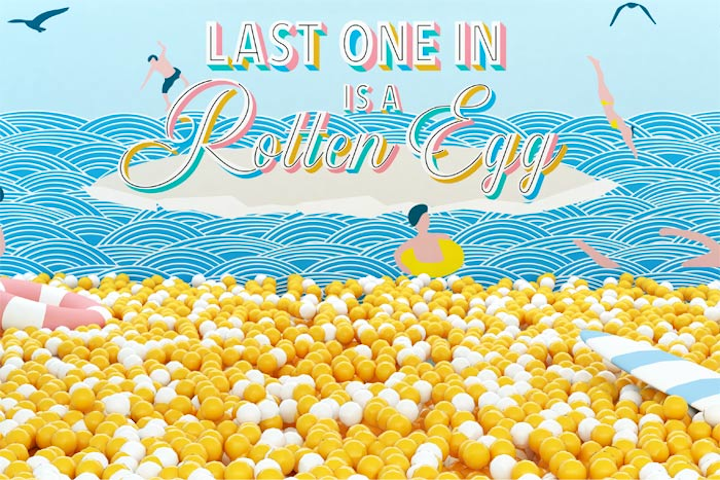 Egg-theme pop-up Egg House will open a Los Angeles location on March 20 for a one-month run. Located in a 12,000-square-foot venue in West Hollywood, the photo-friendly space will have 12 scenes that depict local attractions such as a pink and blue basketball court inspired by the Staples Center and a beach scene depicting the Santa Monica Pier (pictured). The exhibit will be larger than its previous stops in New York and Shanghai; click here to read about last year's New York edition.
Rendering: Courtesy of Egg House L.A.

Moves & Milestones
Premiere Party Rents, led by Sandy Radicevic and her daughter, Stephanie Radicevic-Clark, recently celebrated its 30th anniversary with an intimate gathering at Cielo Farms in Malibu. The party was the first in a series of upcoming company celebrations, which will include an industry event in June.

World-renowned architect (and Los Angeles resident) Frank Gehry turned 90 last week; Curbed has a look inside some of his most memorable designs, including the Walt Disney Concert Hall and his own home in Santa Monica.

In Case You Missed It
We took a look inside 10 of L.A.'s newest restaurants, hotels, and other event-appropriate spaces, including the buzzy 40,000-square-foot complex from Chris Bianco and the team behind Tartine.

In the News
Disney's highly anticipated Star Wars: Galaxy's Edge theme park finally has an opening date. The Hollywood Reporter: ”[The] attraction is set to open on May 31 at Disneyland in Anaheim, California, and then on August 29 at Walt Disney World Resort in Florida. ... Galaxy's Edge will open in two phases with its state-of-the-art rides: Millennium Falcon: Smugglers Run will open first on May 31. Then later this year, Star Wars: Rise of the Resistance will open.”

The Michelin Guide announced its return to Los Angeles after a nine-year hiatus. Eater: “Michelin plans to publish a guide for all of California, which would include Los Angeles, Orange County, San Diego, Sacramento, and Central Coast destinations like Santa Barbara and Monterey. ... Michelin will no longer publish a standalone Bay Area version as the existing stars will get rolled into one big California guide. Los Angeles, as the largest city in California and the country’s second largest metropolitan area, was always a glaring oversight in Michelin’s reach."

Last Friday, the Los Angeles City Council expanded its plastic-straw restrictions to include fast food restaurants, coffee shops, and food trucks. CBS Los Angeles: “The ordinance is a more restrictive expansion of a state law which was signed by Governor Jerry Brown in September that bars full-service restaurants from automatically giving out single-use plastic straws. However, the state law does not apply to fast food restaurants. Under this ordinance, 'all food and beverage facilities' in L.A. ... will be prohibited 'from providing or offering disposable plastic drinking straws to customers except upon customer request.'”

Surprise Event Metric of the Week
6: The number of consecutive years actor and producer Anthony Anderson has hosted the NAACP Image Awards. The Blackish star was recently announced as the host for the 50th edition of the awards, which take place at the Dolby Theatre on March 30 and will be aired live on TV One.

Venue Buzz
Hyatt Centric announced plans to open its first Los Angeles hotel in mid-2020. Located in Koreatown at the corner of Sixth Street and Serrano Avenue, the 21-story mixed-use property will include 192 hotel rooms, 122 condos, and 14,500 square feet of commercial and retail space. The project is being developed by hospitality veteran Leo Lee, with Large Architecture and Hirsch Bedner Associates handling construction and design.

Overheard
“We love cinema. Here are some things we also love: Access for people who can't always afford, or live in towns without, theaters. Letting everyone, everywhere enjoy releases at the same time. Giving filmmakers more ways to share art. These things are not mutually exclusive.”

—A tweet from Netflix Film's official Twitter account on Sunday night. The streaming service is arguing why its films should continue to be eligible for the Oscars, despite criticism from Steven Spielberg and other Hollywood veterans. Eligibility rules will be discussed at the next Academy Board of Governors meeting.

On the Scene
At Monday's Captain Marvel premiere, Marvel Studios worked with Greg Lucas Design and 15/40 Productions to fly a series of Air Force Thunderbirds over the red carpet. See more on Instagram.

What's Next
The iHeartRadio Music Awards will take place on March 14 at the Microsoft Theater and will be broadcast live on Fox. Performers include Alicia Keys, John Legend, Ariana Grande, and Kacey Musgraves; T-Pain will host.

In industry news, ILEA Los Angeles will host the latest edition of its Meet the Masters program on March 13 at the El Rey Theatre. Panelists Richard LoGuercio of Town & Country Event Rentals, Cara Kleinhaut of AGENC, and Michael Stavros of M Culinary Concepts will discuss the importance of transparency and integrity in vendor sales; BizBash's Claire Hoffman and John Marte will moderate.

In addition, networking group Fete Los Angeles will host a reception on March 14 at the Lot Studios.