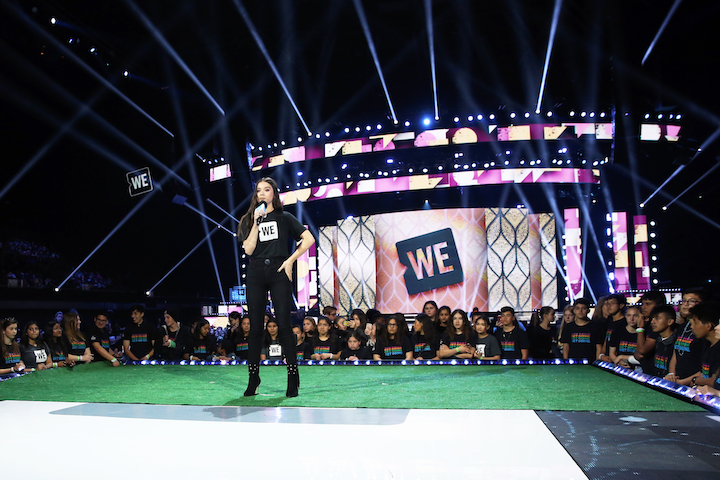 WE Day California took place at the Forum on April 25. The activism-focused event drew 16,000 high-school students and educators, and it was hosted by Neil Patrick Harris. Speakers and performers at the Allstate Foundation- and Unilever-sponsored event included Natalie Portman, Meghan Trainor, Mahershala Ali, and Hailee Steinfeld (pictured). Portions of the event will be included in a national televised special airing on ABC in August.
Photo: Jesse Grant/Getty Images for WE Day

PMK-BNC has promoted Cary Kwok to the role of senior vice president in the brand marketing and communications division. Since joining the agency in early 2017, Kwok has led communications for tech and gaming clients including Samsung Mobile and Activision.

In the News
The Milken Global Institute Conference drew 4,000 attendees to the Beverly Hilton this week. Bloomberg: "The days [were] filled with panels on reinventing the financial sector, navigating the impacts of Brexit, combating obesity in the workplace, dealing with cyber attacks by foreign governments, and providing affordable housing in big cities. During breaks ... there’s yoga, massages, and playtime with puppies. And then, of course, there’s the networking. Plenty of schmoozing goes on in conference rooms and hallways, but a number of satellite parties—some affiliated with Milken’s institute, some not—add to the exclusivity and what participants see as the value of the affair."

Los Angeles magazine traced the history of local music festivals, from 1964's T.A.M.I. Show to the recently canceled FYF Fest. Los Angeles Magazine: "Summer music festival season is nearly as long as baseball season (and that’s long as hell). From mid-April through mid-October—aka Coachella through Desert Daze—music fans descend on L.A. and its environs to catch a bunch of their favorite acts in one place over the course of one or just a couple days. Multi-day music extravaganzas are part of our D.N.A."

In May, the Smithsonian will honor local chef Helene An, owner of wildly popular Crustacean restaurant in Beverly Hills, with a Pioneer Award in Culinary Arts. Los Angeles Times: "[The award is] recognizing her as 'the mother of fusion cuisine' and 'the first to introduce Vietnamese cuisine to mainstream America, changing American palates forever.'"

Venue Buzz
The H.Wood Group's Alice, a new restaurant at the upcoming 1 Hotel West Hollywood, opened this week. The airy, indoor-outdoor space was designed by John Sofio of Built Inc.; it spans 2,950 square feet and has 160 seats. Group culinary director Maynard Llera and chef de cuisine Geter Atienza created the French-American menu, which includes both sit-down service plus a to-go marketplace offering artisanal wines, oysters from a raw bar, and charcuterie boards. The eatery is currently open for breakfast and lunch; dinner service will begin later this month.

Surprise Event Metric of the Week
7,000—the number of people who contributed to the Los Angeles Convention Center's colorful new mural, which spans the length of four football fields and is billed as the largest public art and civic project in the country. Titled "Shaping L.A.," the mural is a collaboration between nonprofit Portraits of Hope and the City of Los Angeles Department of Convention & Tourism Development. After being displayed for six months, the artwork will be donated to social service institutions.

Overheard
"The time has come for those of us fortunate enough to be in this room to give underrepresented communities a bigger voice, show our appreciation for each other, and shout out our love."

—Grammy-winning artist Ciara, welcoming the audience to the Hollywood Reporter's inaugural Empowerment in Entertainment gala, held on Tuesday at Milk Studios and produced by AGENC. The event honored Oprah Winfrey and served as a launch for the Young Executives Fellowship program—a joint initiative from WME, Amazon Studios, musician Selena Gomez, and several local school nonprofits; the program will give underserved communities a pipeline to careers in the film, TV, and music business.

On the Scene
On Tuesday, BizBash contributor Rose Curiel attended the disco-theme 60th-anniversary party for Dr. Scholl's, held at Festoon in Culver City.

What's Next
The 30th anniversary of L.A. Taste of the Nation will take place on Saturday at Culver City's Media Park. Highlights will include a kids' corner with family-friendly games, a "giving tree" with prizes in exchange for donations, plus eats from some of the city's top restaurants and chefs; all proceeds will support the No Kid Hungry Campaign.

The fund-raisers continue Saturday night, with the Humane Society of the United States' "To the Rescue!" Gala at Paramount Studios. Hosted by Bellamy Young, the event will honor Kesha, Wallis Annenberg, and Justice William A. Newsom III. And Alzheimer’s Los Angeles will host its seventh annual An Unforgettable Evening in Santa Monica on Sunday; the private garden party will include a performance by Leslie Odom Jr.

In non-benefit news, the inaugural BeachLife Festival takes over Redondo Beach this weekend with performances by Willie Nelson, Brian Wilson, Bob Weir, and many more. (Check out our interview with the founders.) And Saturday is the fourth annual Derby Day L.A. at Will Rogers Polo Club; the Kentucky Derby viewing party will include brand activations, polo matches, lawn games, and "best hat" contests.