BizBash Announces New Inductees to its Hall of Fame

The New York-based honorees, along with a rising star, have decades of experience working in event design and production, meetings, hospitality and sponsorships, corporate events, rentals, and more. 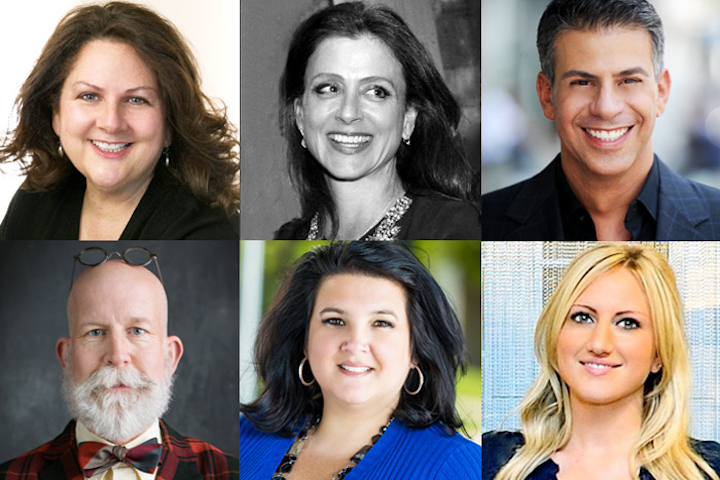 Five veteran event professionals from New York along with a rising star in the industry will be inducted into the BizBash Hall of Fame at a ceremony February 26 at Sony Hall.

David Beahm
Founder and president, David Beahm Experiences
Known for his whimsical style and trademark lavish flower creations, Beahm is a favorite of celebrities, socialites, and the fashion world, as well as Fortune 500 companies. He made his name following his work on Catherine Zeta-Jones and Michael Douglas’s wedding, which was featured in magazines and news shows internationally and touted as the "Wedding of the Century.” Town & Country magazine has called him “one of New York’s extremely design savvy” talents, and he has been named a top event designer by BizBash. DBE specializes in destinations and produces events the world over. Beahm stays grounded by keeping his hands in the dirt growing wildflowers, production flowers, herbs, and vegetables on his Thistle Dew Farm in Bucks County, Pennsylvania.

Michael Cerbelli
C.E.O. and president, Cerbelli Creative
For more than 38 years, Cerbelli has produced events in New York City and beyond—from the Economic Forum in Davos, Switzerland, to a birthday party for the King of Morocco, to a signature event at the palace of Catherine the Great in St. Petersburg, Russia. A recent multimillion-dollar Brooklyn Bar-Mitzvah at the Barclay Center grabbed the attention of the worldwide press from CNN to the BBC. He is also known in the event community for creating Michael Cerbelli’s: The Hot List, a trend report that he shares through a dynamic presentation at industry events.

Cindy Tenner
Vice president, special events, Home Box Office
Named to her current position in 2012, Tenner has been responsible for planning and executing the company’s high-profile entertainment events, including screening premiere receptions, boxing parties, sales and marketing events, C-suite and client dinners, wrap parties, cast and crew screenings, and the Emmy and Golden Globe after-parties. Tenner joined HBO in 1992 as an assistant in special events, from which she was promoted to coordinator, manager, and director. Prior to joining HBO, Tenner worked at Katz Radio in New York as a sales assistant, where she planned and organized conferences and was responsible for preparing solicitation presentations for potential clients. During her tenure in HBO’s Special Events department, Tenner has overseen the planning and logistics of more than 50 events per year, including such red carpet events as the premieres of Game of Thrones, Veep, Girls, Entourage, Sex & the City, and both The Sopranos premiere at Radio City Music Hall and more recently The Sopranos 20th Anniversary celebration. Additionally, Tenner has produced a variety of sports-related hospitality events for Wimbledon, the French Open, and boxing parties for Tyson-Lewis and Mayweather-Pacquiao. She is also a member of the Academy of Television Arts and Sciences.

Jeanne Weintraub
Senior director of global event management, Johnson & Johnson
A 22-year veteran of the world’s largest and most broadly-based healthcare company, Weintraub oversees the Global Event Management Group of 10, responsible for global meetings, events, and company hospitality sponsorships. She is also a member of the company's Enterprise Strategy and Communications Leadership Team. She and her team are responsible for the strategy, including creative and design and orchestration and implementation of all Johnson & Johnson Executive Committee events. She has direct oversight of and provides strategic counsel for the largest and most complex meetings and high-profile global events hosted by Johnson & Johnson. Each year, she is responsible for more than 75 events around the world, ranging in size from 10 to 7,000 participants. During her tenure, Weintraub has served as the global hospitality lead for the FIFA Confederations Cup 2013 sponsorship, and subsequently she led the FIFA World Cup 2014 sponsorship that spanned 12 cities across Brazil.

Ellie Winkleman
Director of corporate events, SL Green Realty Corp.
Winkleman began her career in New York event management with Applause LLC and JKS Events Inc., where she spearheaded events, planning, and marketing activities for large corporate and private clients across multiple industry disciplines. In 2004, she went to work as SL Green Realty Corp.’s director of corporate events, where she manages a seven-figure annual budget covering a broad slate of corporate events, meetings, and conferences for management and clients. Her annual GreenDeals award night at Cipriani is entering its 26th year as one of the premier events in Manhattan. Winkleman is a two-time winner of the Big Apple Award, presented by the International Live Events Association’s New York Metro Chapter to “reward achievement amongst the best and brightest event industry professionals in the NYC Metro area.” She is a past board member of ILEA NY Metro chapter and a member of Meeting Professionals International and the Council of Protocol Executives.

Ashley Strachovsky
District account executive, events, Cort Events
Strachovsky has been involved in the event and design industry for more than seven years. With five years of experience at Cort, she initially worked in the Residential division where she excelled at home staging and interior design projects. In the Special Events division, she now helps design and execute more than 1,100 events nationwide. Prior to Cort, Strachovsky worked for a major New York luxury design company, playing a crucial role in designing events at their signature properties, the Trump Soho and the Ritz-Carlton, Battery Park. Strachovsky graduated from James Madison University with a bachelor’s of Business Management and a minor in Hospitality and Tourism.