On June 25, the Greater Miami Convention & Visitors Bureau brought South Beach to New York by turning a city sidewalk into an exotic car exhibition and taxi stand. Like last year's pop-up pool in Union Square, the event promoted Miami tourism and the "It's So Miami" campaign, but this year was set up opposite Midtown's Bryant Park and open to the public from noon to 6 p.m.

Replacing the city's typical yellow cabs with Bentleys, Lamborghinis, and Ferraris, the taxi-stand-style stunt offered passersby free rides around the block, hoping the allure of fancy vehicles, plus free drinks in coconuts and summer accessories, would remind them of Miami's offerings. TH Productions produced the promotion.

"The event was to celebrate the second year of the ‘It’s So Miami’ campaign," said Sara Joseph, senior vice president of Current Lifestyle Marketing, the bureau's PR agency. "We also wanted to celebrate the fact that New York is Miami's top domestic market and Miami had record-breaking tourism for the third consecutive year." 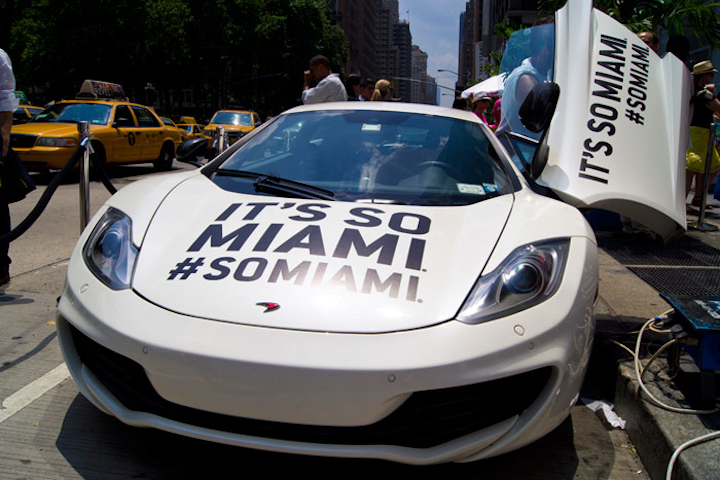 All the vehicles serving as taxis at the event had the campaign's phrase "It's So Miami" emblazoned on them. The hashtag on the cars also reminded guests to tweet and Instagram their photos.
Photo: Fred Blauth/BizBash 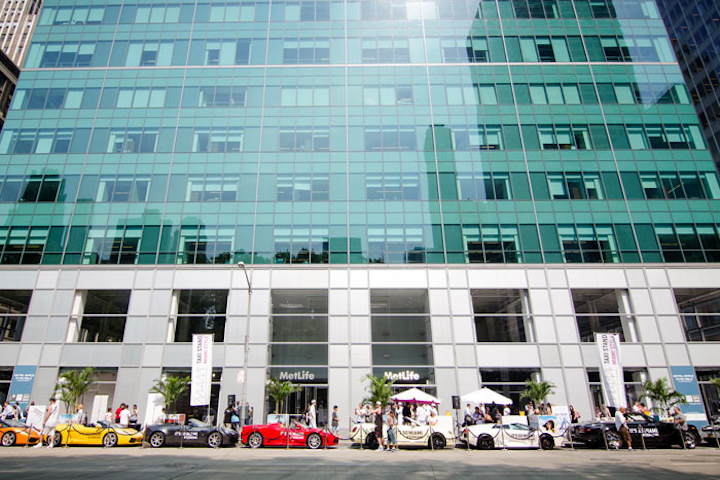 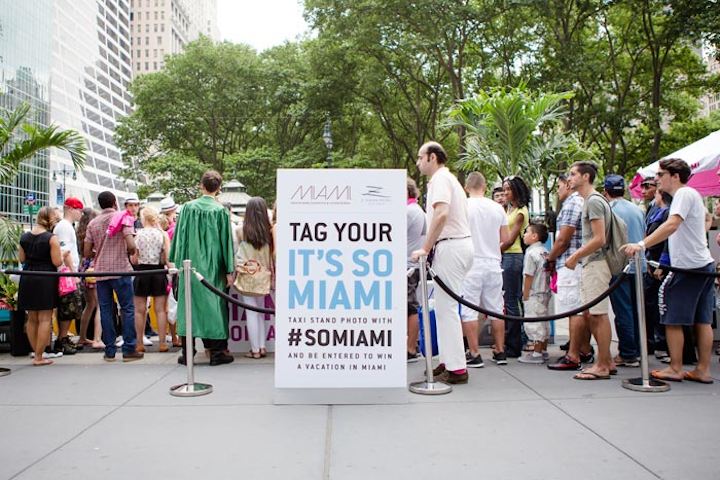 As visitors to the promotion waited in line, they could upload pictures to Instagram and Twitter with the hashtag #SoMiami, which entered them for a chance to win a free trip to Miami.
Photo: Patrick MacLeod 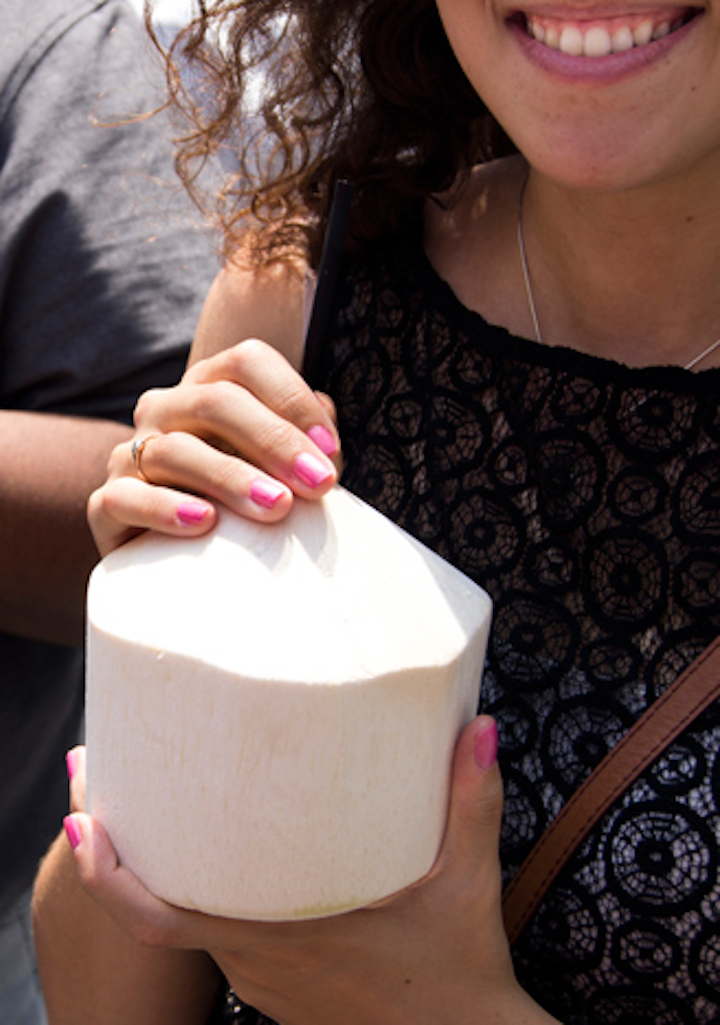 Coco frios were given to guests waiting for a car ride. The authentic Miami drink was served in real coconuts, which helped give the event a beachy vibe.
Photo: Fred Blauth/BizBash 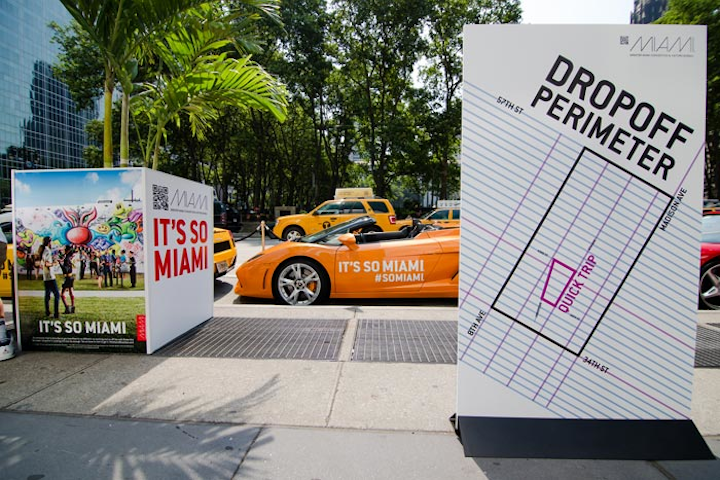 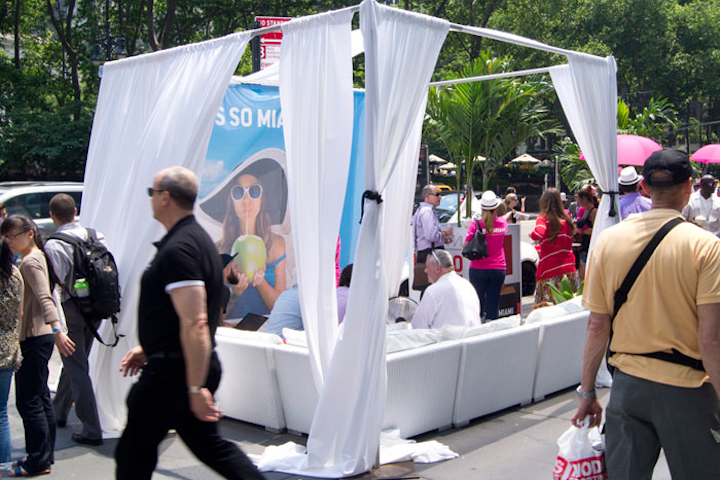 The public promotion had a cabana for V.I.P. guests that featured an all-white couch and colorful pillows with "Miami" written on them. A DJ was stationed nearby to provide music.
Photo: Fred Blauth/BizBash 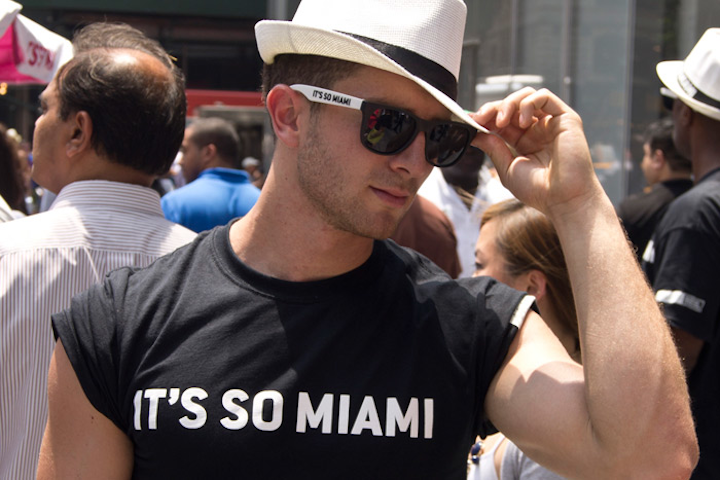 Staff members at the taxi stand gave away free T-shirts, hats, and sunglasses marked with the phrase "It's So Miami" to anyone who took a ride in the exotic cars.
Photo: Fred Blauth/BizBash
More in New York City & Tri-State Area